We’ve had ‘pre-flexed’ display smartphones for a while now and as interesting as they are, things do get really interesting when we have proper flexible screens on devices and smartphones. Some of the latest patents filed by Samsung reveal smartphones with very interesting form factors that are possible thanks to flexible displays.

Probably one of the most interesting concepts is the smartphone with a scrollable display. While it is only a drawing, it still looks like something out of a sci-fi movie.The device in question will have a tube like design with a display that can be rolled out when needed. It works like a paper scroll, the user just has to hold the edge of the display and pull it out. In order to achieve the flexibility, Samsung says that glass may be substituted with a plastic film with an OLED or LCD display. There could also be a button that will open up the device to the desired length based on the app selected from the display on the outside of the tube itself. 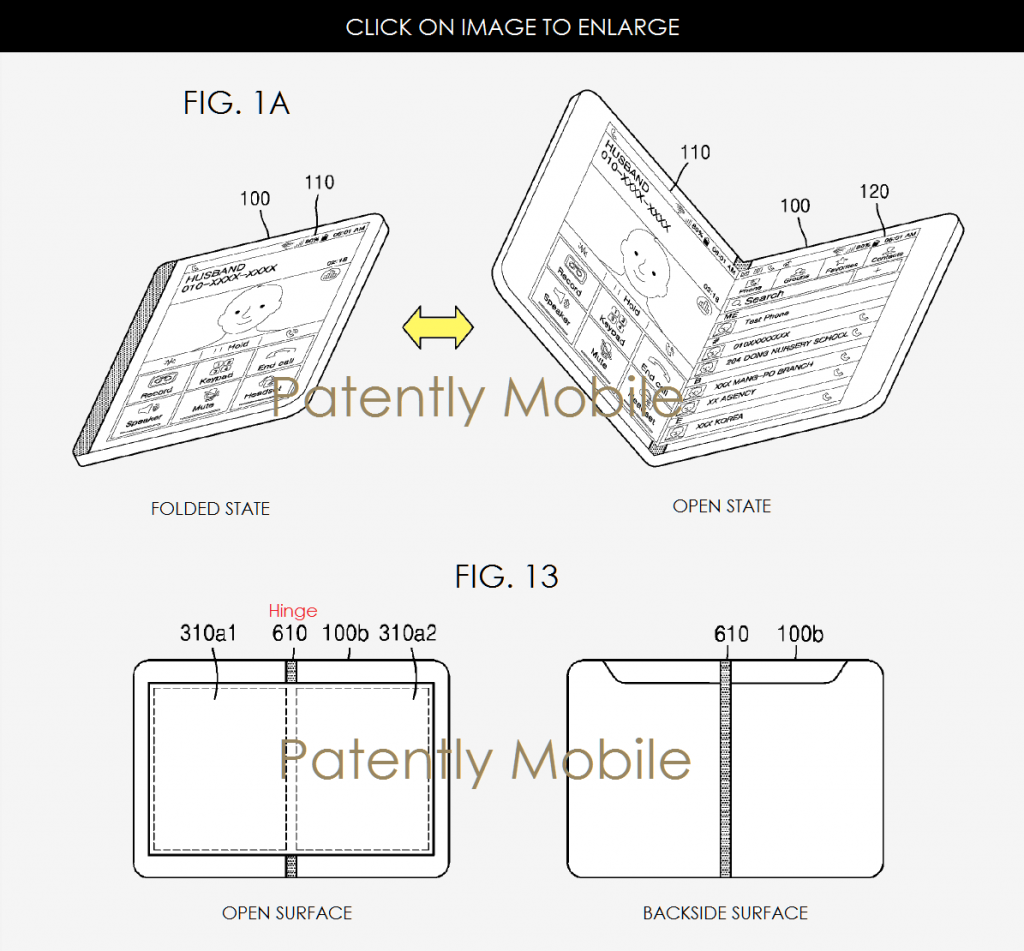 Another concept is the foldable smartphone which can be converted into a full fledged tablet with the help of a hinge mechanism. Now, this is a concept that has been rumored to be in the works for quite a long time now, so chances are that Samsung may actually have an early working prototype of the device already. It also seems relatively easier to implement compared to the rollable display concept since the technology used will be similar to the one found on the Note Edge where Samsung used two different displays and merged them together. However, in this case, the device should be able to make a seamless connection as and when the user desires. 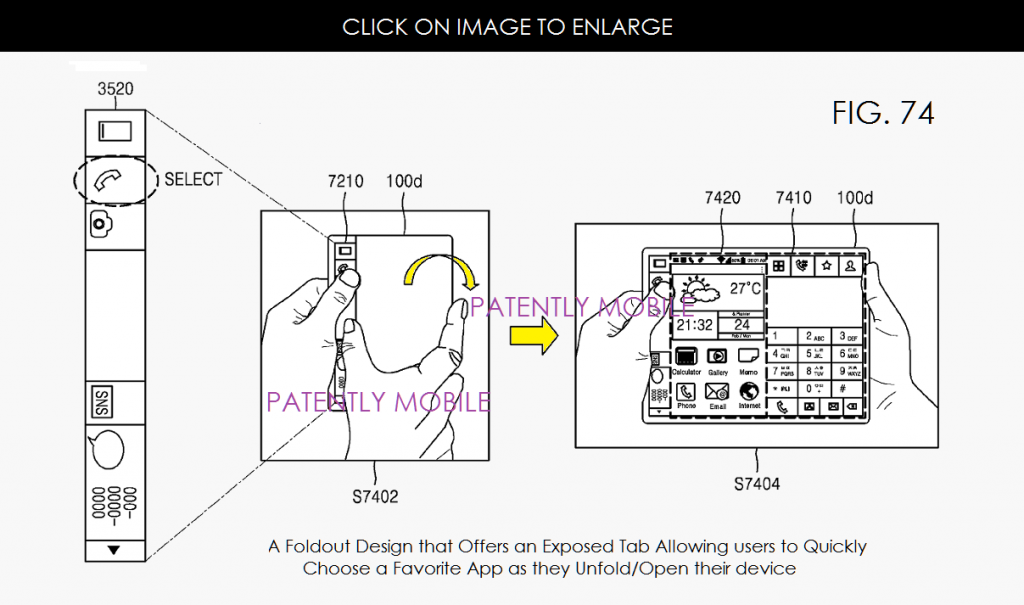 The third concept is probably a combination of the rollable smartphone and the foldable smartphone. In this case, you have a flat panel that folds off center so that even with the main display folded, you have a screen that can be controlled just like on the rollable concept. You can have your notifications and app shortcuts here. If you click on an app shortcut, the smartphone will launch it and keep it ready by the time you open up the foldable display. The user will still be able to make/take calls, click pictures etc without opening up the display and can open it up only when needed. The downside here is that the display on the outside seems to be only the thin strip which can show the notifications and shortcuts, so any texting, browsing etc you’ll need to do will have to be with the smartphone opened up and unlike the foldable smartphone concept above, you won’t be able to use it without opening it up for full fledged function. This too relies on a hinge mechanism. 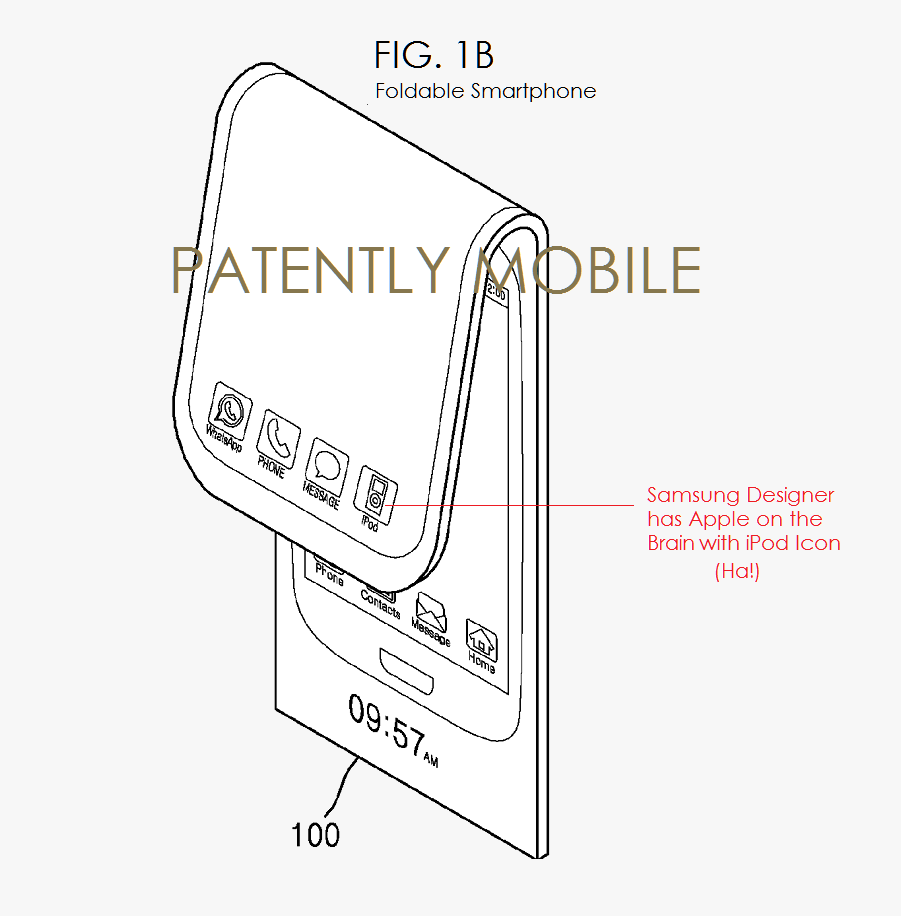 Lastly, you have a bendable smartphone that can bend vertically and doesn’t rely on a hinge mechanism. Therefore, it should use a technology similar to the rollable smartphone. The display seems like it can be bent to a certain degree. We aren’t sure exactly what the use case would be for this kind of a smartphone but perhaps it could be used as a money clip or can be clipped to your belt or pocket with ease.

All the above devices are just concepts and while there may be early prototypes of them that Samsung is working on, it may take a few years before we actually see proper implementations of it in real life. By then, there are chances that the designs would’ve changed as well.