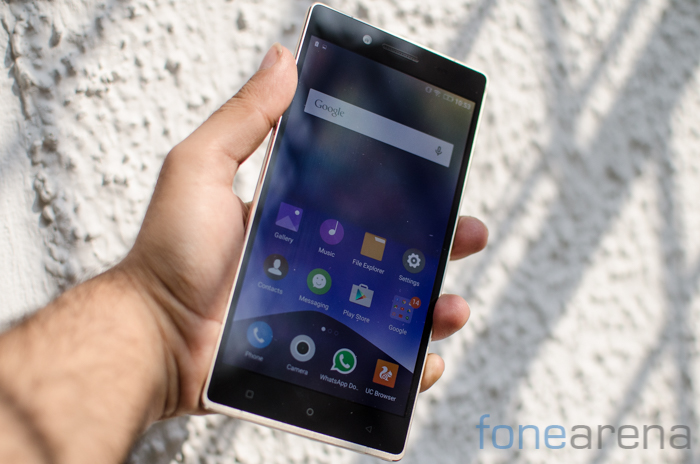 It’s been a long while in the making. The Gionee Elife E7, the erstwhile flagship of the company was launched way back in 2013. Its now almost two years since the day and we are finally getting our hands on the Gionee Elife E8. Sure, it was announced back in June but that has perhaps made the wait harder still. There are improvements all around and it is clear that Gionee has learnt a lot from their first effort however the competition too has improved. The smartphone ecosystem is no longer the same and it remains to be seen if the Gionee Elife E8 and it’s accompanying Amigo OS are competitive enough. We’ll find that out in our review.

The Gionee Elife E8 is a behemoth of a device. The screen itself spans 6 inches across and that’s without counting the substantial bezel on either end of the phone. At that size, the screen itself becomes the defining design element. Indeed, the company has decided to opt out of doing much work on the design department. The phone is simply a large block sporting a massive display and we quite like it for that. 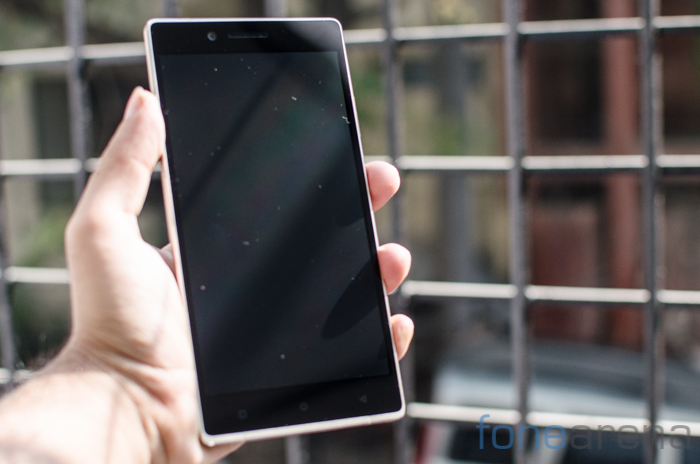 As we mentioned, the front sports a huge screen below which lie the capacitive controls. Up top is the front facing camera that we’ll talk about shortly. We feel that Gionee would’ve been better served by on-screen controls here which would’ve helped in shrinking the size of the phone to a degree.

The right side sports the volume rocker and power button. Tactile feedback here was just about satisfactory, a bit more depth would’ve helped it’s case. Up top lies the 3.5mm audio jack while the bottom of the phone has a curiously shaped microUSB port. While the rectangle cut might indicate that this is a USB Type C connector, it is just a regular microUSB port. The shape of the port makes it hard to make out which way to insert the cable. 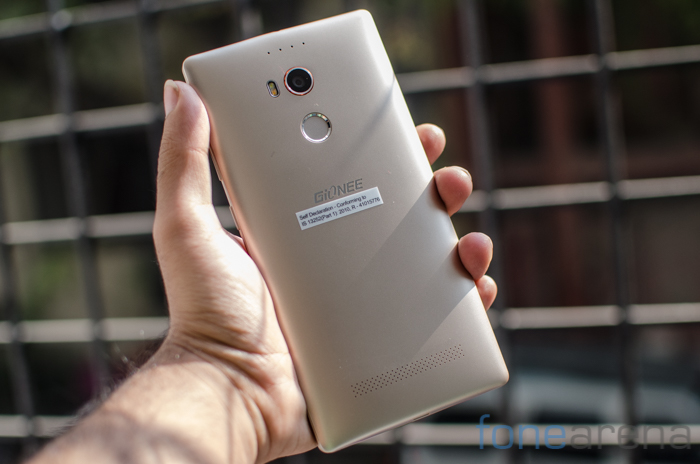 Move over to the rear of the phone and you get to see that Gionee has eschewed it’s usual straight edges for a more curved design.You’ll also notice that there’s a fingerprint scanner under the camera module which itself is paired with a dual LED flash to the side. The aforementioned curved design is important given the size of the phone and makes the gigantic frame a bit easier to manage. Talking about the gigantic frame, the dimensions of the phone are 164.0 × 82.3 × 9.6 mm while the weight is a whopping 207grams. There is no way that this phone will go unnoticeable in your pocket or hand.

You know the drill. A heavily customized ROM is what you’ll find on the Gionee Elife E8. If you’ve used any previous Gionee phone, there’s no surprise here. The interface is fairly spartan and Gionee has cut down massively on the bloat. We’ve detailed the Amigo UI many times and it follows the same trend as that is followed by the competition. Swiping across the lockscreen drops you straight into the homescreen. Amigo UI makes do without a secondary hierarchy for applications and all presented directly on the homescreen. You can organize these into folders and that’s about it. 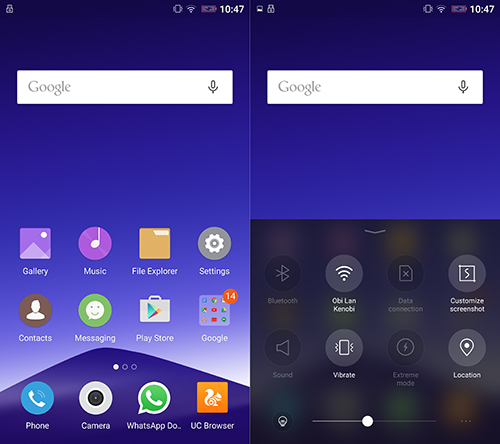 Amigo 3.1 like the previous versions of the custom ROM break apart the notifications and regular toggles into two separate areas. Swiping down from the top reveals the notifications while swiping up from the bottom reveals the toggles used to manipulate WiFi, Bluetooth and various other functionalities. Its a bit of a learning curve and while we’d have preferred a more standard way of doing things but it really comes down to personal preference. The ROM is built on top of Android 5.1 and historical precedence suggests that the phone will probably not get the Android 6.0 update anytime soon.

The Gionee Elife E8 provides fairly high end performance by combining a 2 GHz octa-core MediaTek Helio X10 (MT6795) processor with a PowerVR G6200 GPU. An Octa Core chip from MediaTek, the processor is designed to provide a flagship experience which essentially pits it against handsets running the Snapdragon 810 chipset. As you’ll notice in our synthetic benchmarks below, the competition handily outpaces the Gionee Elife E8. The performance differential isn’t drastic but if you care about benchmark scores then you’ll notice that the Elife E8 usually lands near the bottom of the benchmark pile. 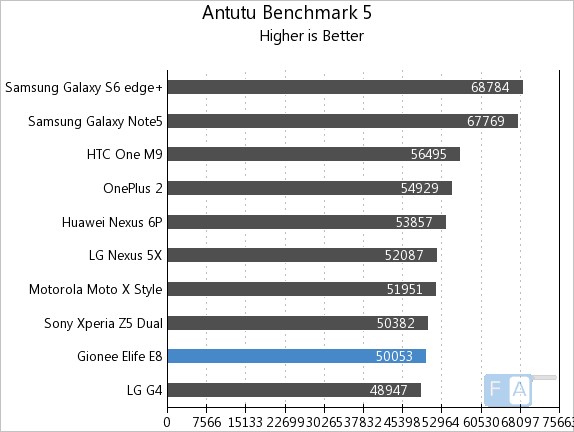 In the AnTuTu benchmark, the E8 scores 5005 points which is amongst the lowest scores in our flagship chart. 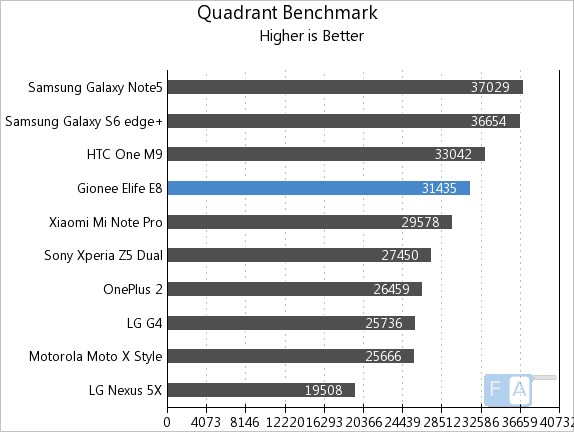 The Quadrant benchmark with a score of 31435 points is also strictly middle of the path. 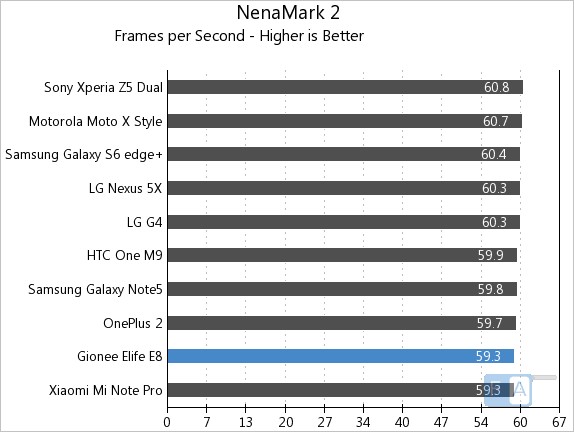 The GPU centric Nenamark benchmark score show that the phone with 59.3 points is competitive enough.

The Elife E8 has a massive 6 inch HD display with an equally massive resolution of 2560 x 1440 pixels. For most use cases the display is more than adequate with its rich colors. The AMOLED panel has an intrinsic property to be particularly vibrant and true to its nature, displays deep blacks and brilliant contrast levels on Gionee’s smartphone. 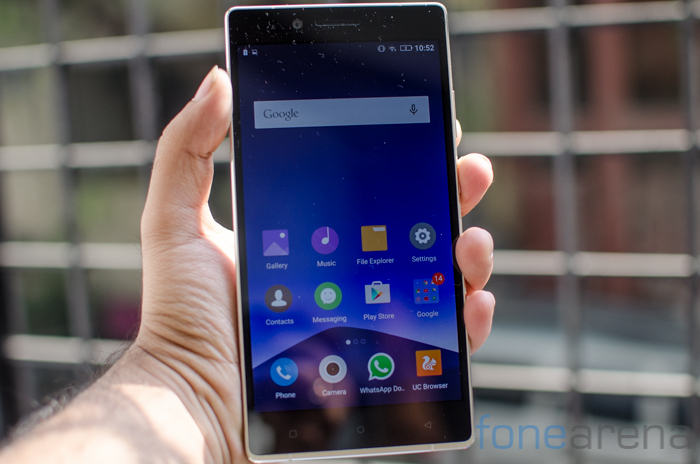 Bright sunlight doesn’t faze the phone but in tandem with the highly reflective surface, it does become a bit hard to see. We’re quite satisfied by the display and it particularly shines when watching high resolution video content.

For all the focus that Gionee has on the photography capabilities of the handset, we were left a bit underwhelmed with the actual performance. In keeping with the theme of going large on all fronts, the Elife E8 has a 23.7MP camera module with optical image stabilization. This is a 1/2.3″ sensor with a 6P lens. 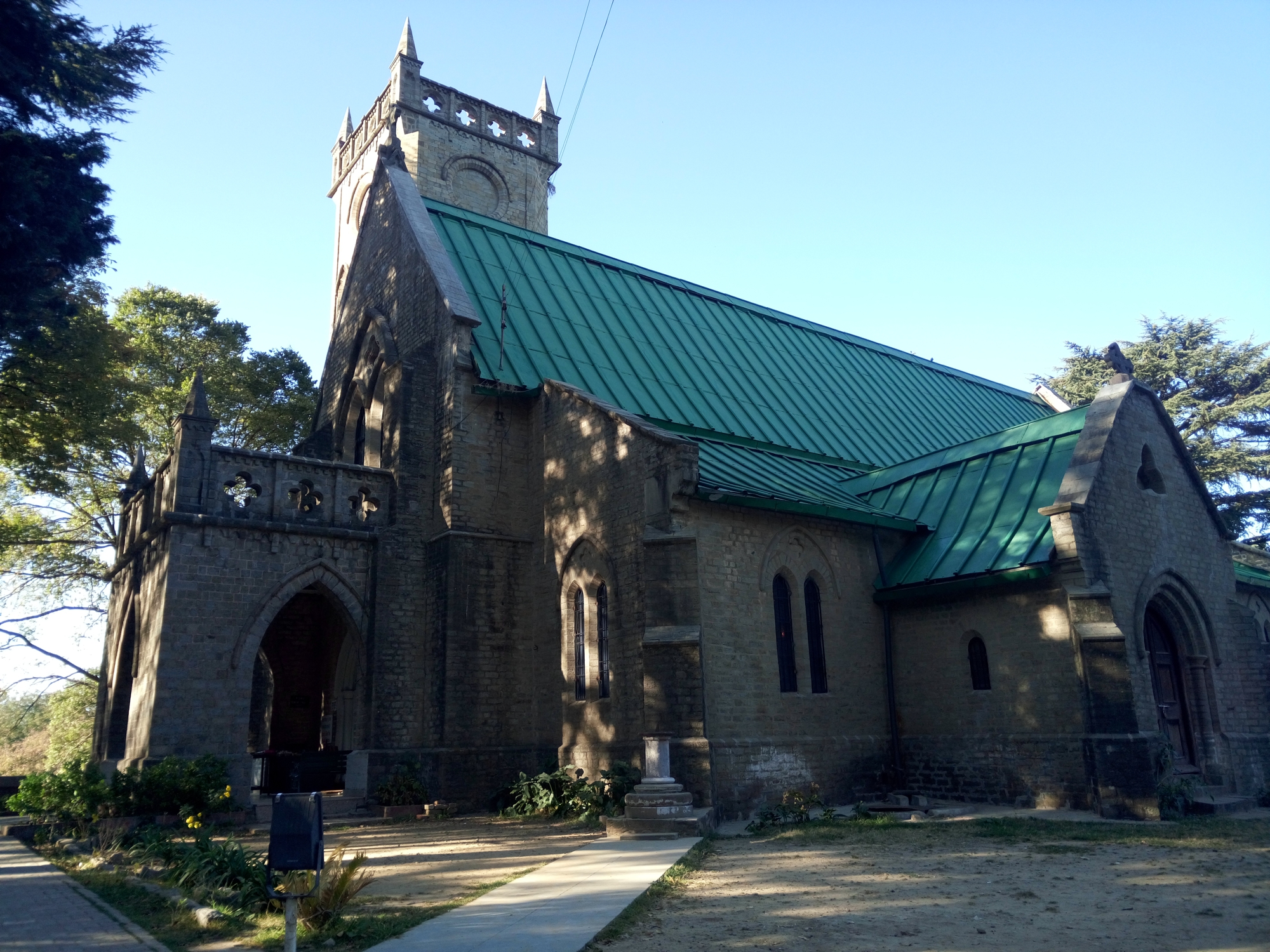 As you’ll notice in the above sample, the camera tends to burn the highlights indicating not so great dynamic range. Indeed, the dark sections of the shot too lose out completely on details. Also, towards the corners of the photograph you’ll notice lens related distortion.

These impressions are echoed across the range of samples we took. As you’ll notice from the second and third shots, photographs appear very dull and washed out. While noise levels are in check and there is a fair amount of detail in the images, we feel that the handset still needs some software tweaking to be able to take shots. As it stands, the competition widely surpasses the camera on the E8.

Connectivity is one area where the handset excels. The Gionee Elife E8 boasts of 4G LTE, Wi-Fi 802.11 ac/b/g/n, Bluetooth 4.0 with A2DP, GPS, USB OTG and even NFC. In addition, you can expand the built in 64GB of storage via the microSD card slot. Of the 64GB of storage, there’s about 52GB available so you really won’t be running out of space on the E8 anytime soon. 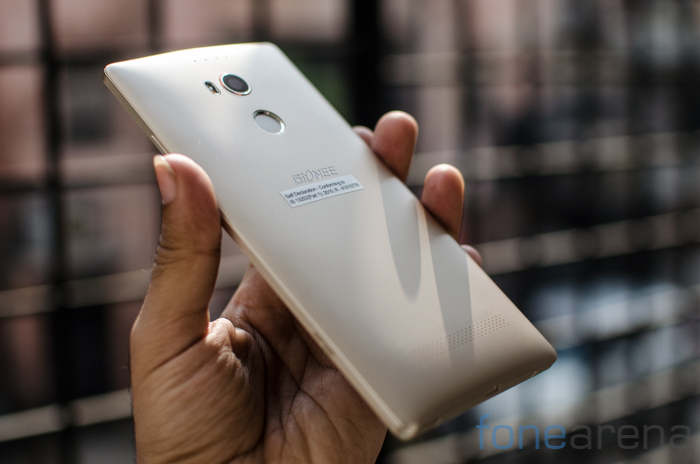 Moving on to battery life, the phone has a pretty large 3520 mAh battery. However the 2Ghz MediaTek Helio X10 chipset and the large 2K display do take a toll on longevity. The use of an AMOLED panel helps mitigate this to a degree. All in all, we found battery life to be adequate but definitely not exceptional. Screen on times range from between 3 to 4 hours depending on usage. Standby times are good enough and the phone lasts a full work day at a minimum which is competitive enough.

The Gionee Elife E8 is a curious beast. With an enormous size and equally enormous specifications, there’s no doubt that the handset ranks very high up in the spec lists but that alone doesn’t make a great device. 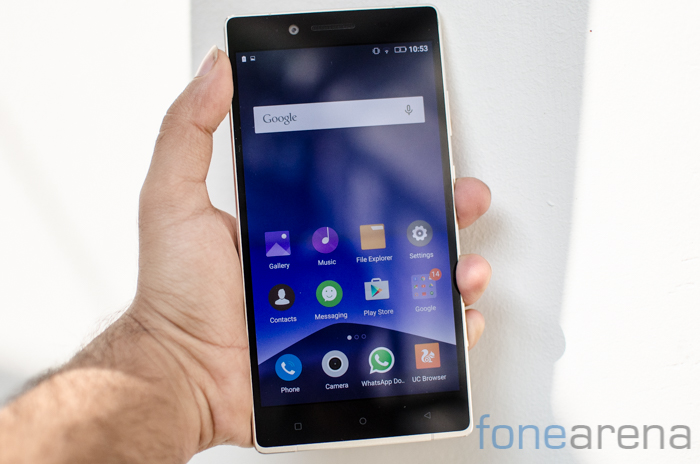 The display tends to err towards over saturation and as such isn’t the brightest around. We found the camera to be particularly disappointing as well which certainly doesn’t help it’s case. Battery life too is middling. Over the course of our review we came to realize that there were a lot more negatives on the E8 than the positives that come with using a high end phone. The phone costs an eye searing Rs. 35,999 at which point you might as well invest in a Nexus 6p if you want a large, high performance Android running phablet.