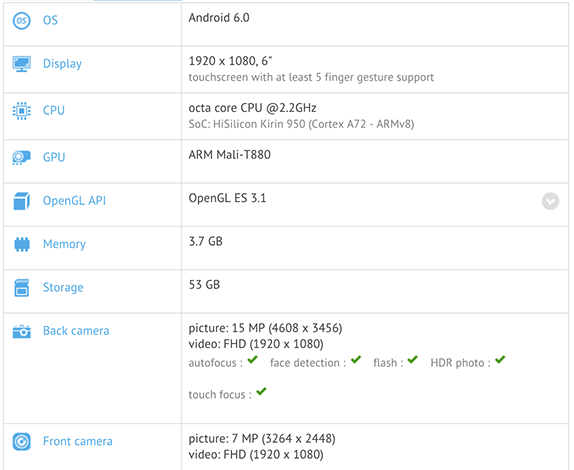 A new Huawei handset has popped up on GFXBench under the alias NXT-AL10. The specifications do reveal a handset that is very similar to the rumoured specifications for the upcoming Mate 8 smartphone from Huawei.

The listing states that the phone has a 6″ 1080p display which is what the Mate 8 is expected to pack. Also making an appearance is the upcoming home brewn 2.2GHz octa-core Kirin 950 processor from Huawei with Mali T880 GPU.

The listing shows a 4GB RAM (3.7GB to be precise) as well as 64GB of on-board storage out of which 53GB will be available to the user. The rumours indicated a second variant with 3GB of RAM and 32GB capacity as well but the one in the listing seems to be the costlier variant with more space and RAM.

The Mate 8 is set for a launch later this month on 26th Novemeber while the processor, Kiri 950 is set to be announced on 5th Novemeber.