Earlier this week we saw specs of Samsung Galaxy A3 and Galaxy A7 successors leaked on GFXBench. Now, specifications of the next generation Galaxy A5 has also surfaced. 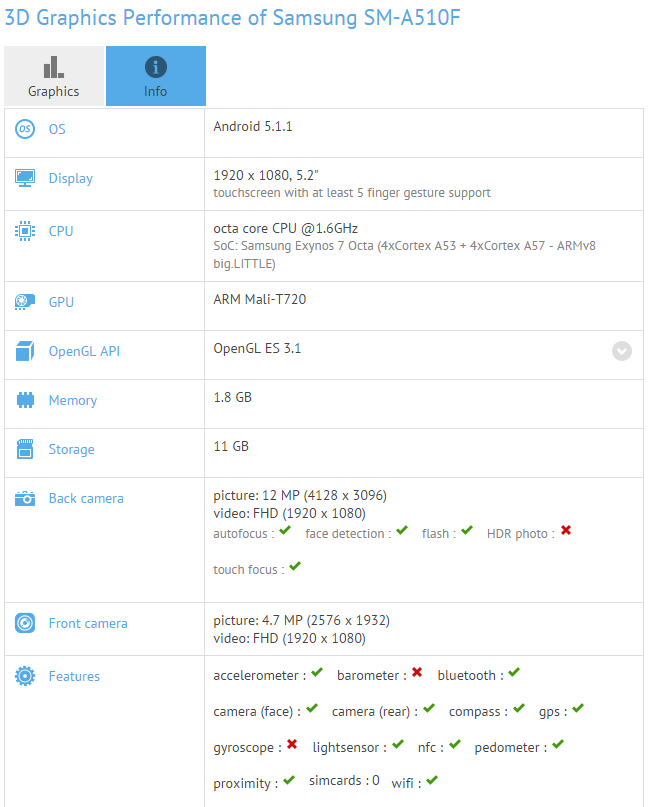 As per the GFXBench listing, the Galaxy A5 successor carries the model number SM-A510F. It sports a 5.2-inch screen with 1080 x 1920 pixels resolution and is powered by a 1.6 GHz Exynos 7 Octa SoC with four Cortex-A57 cores and four Cortex-A53 and ARM Mali-T720. Running Android 5.1.1, the phone comes with 2GB RAM, and 16GB internal memory. There is a 13MP rear camera and a 5MP front shooter on the phone. Other connectivity options for the device include Bluetooth, GPS, WiFi, and NFC.

The next generation Galaxy A5 recently received Bluetooth certification from the Bluetooth Special Interest Group (SIG). The phone along with Galaxy A3 successor was imported to India for testing last week and boasted a price of Rs 13,201. It is not known when Samsung will announce this phone.