Motorola and Verizon has teased an event later this month where it will announce the new Droid phones. The company has sent out press invites for October 27th. 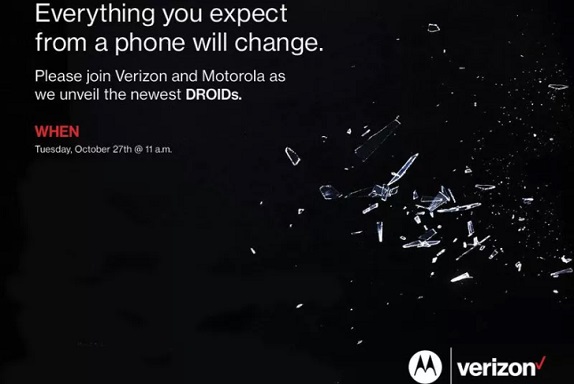 It is expected that two new phones – Droid Maxx 2 and Droid Turbo 2 will be announced at the event.The invite reads “Everything you expect from a phone will change” followed by the date. The Droid Maxx 2 is said to be a mid-range device which is a re-branded version of the Moto X Play. Hence, the specs of the Droid Maxx 2 could be same such as a 5.5-inch FHD display (1080p), Snapdragon 615 processor, 2GB RAM, 21MP rear camera, 5MP front camera, and massive 3630mAh battery. Meanwhile, the Droid Turbo 2 could be be a high-end device with a 5.5-inch QHD display, Snapdragon 810, 3GB of RAM, 20-megapixel rear camera, 5-megapixel front camera, Turbo Charging, and Android 5.1.1.