Earlier this week, a possible OnePlus X/Mini was said to pass via FCC. Now, the same phone has received TENAA certification and purported leaks about the specifications have also surfaced. 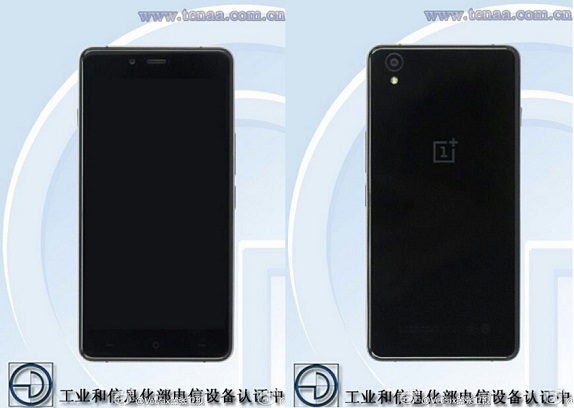 Th above photos are from TENAA database and were shared earlier today on China’s Weibo network. The back image of the phone is in line with the one from FCC. As per the photo, the Mini/X has 2.5D glass covering the front and metal band wrapped around the sides. At the front the phone has a front facing camera and earpiece while three capacitive touch buttons are seen below the display. A rear camera and flash is present on the top left hand side at the back. The TENAA listing suggests,the phone will measure 140 x 69 x 6.9 mm with 5 inch screen and 2,450 mAh battery.

Along with the TENAA images, specifications of the OnePlus X/Mini were leaked by GforGames. The phone will apparently sport a ClearForce feature which is similar to Apple’s Force Touch used on the latest iPhones. Xiaomi Mi 4c uses the ClearForce-ready Synaptics S3708 touchscreen controller and as per the report, the OnePlus X/Mini could use the same. Moving on, the phone is said to come with front facing 1.2W stereo speakers. In case of the 13MP rear camera, the device will not have optical image stabilization, but supposedly will make use of PDAF (phase-detection autofocus) and EIS (electronic image stabilization).

The upcoming the OnePlus handset will offer an FM radio, NFC, IR blaster and will have removable StyleSwap covers. Previous rumors had stated that the phone will be powered by an Octa-Core MediaTek Helio X10 SoC but it could go for a Snapdragon 801 instead. Finally, the device will have a 2GB RAM. The OnePlus X/Mini is rumored to be priced around $250.