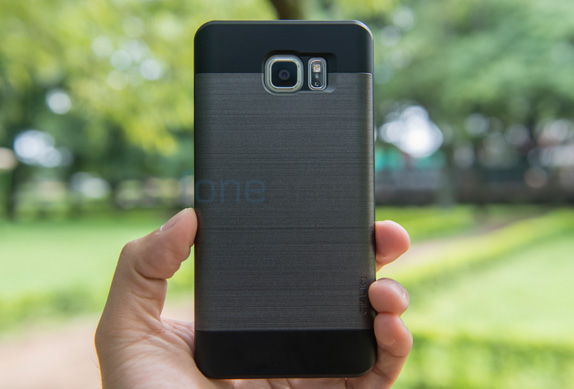 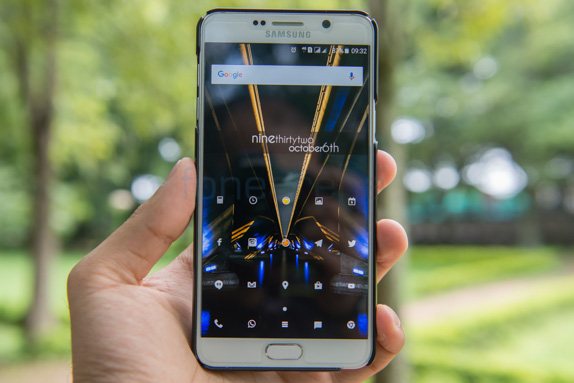 The Obliq Slim Meta case for the Galaxy Note5 is a case that is designed to protect your phone while at the same time maintaining the slim profile and shape of your handset. In this review we take a look at the case’s design, handling and protection to see whether it really has your phone’s back ‘covered’.

‘Premium’. That’s the term that comes to mind when you first handle the Slim Meta case. It has a certain amount of weight and finishing that sets it apart from regular cases. Inside the case, you have the Obliq and Slim Meta branding along with a slogan that says “We’ve got your phone’s back”. Such branding and writing might be familiar to those of you who have used Spigen cases in the past. Once you put the case on, you can see how well they’ve managed to align the port cutouts as well as the entire size and shape of the case. While it certainly does add a few mm of thickness, I still felt that the phone was quite slim when I held it in my hands. The basic shape and feel of the phone remains the same even with the case on. To quote Ace Ventura, it fits “Like a glove”. The four slits at the corners make sure that the case is easy to snap on/off your device.

We quite like the two-tone finish on the back.that is quite reminiscent of the iPhone 5/5S’s back. The brushed metal look actually does have some texture to it as well and while it isn’t actual metal, it still is of high quality. The keys are left exposed and in a way I prefer that to actually having plastic covers over those keys which worsens the feedback you get from them.

The case that we reviewed was the Black/Titanium combo. There are 4 other variants available in White/Champagne Gold, Black/Champagne Gold, White/Silver and Black/Metallic Blue combinations.

The Black portion has a soft touch feel which feels premium and offers a good amount of grip. So does the brushed metal portion in the middle and you will be glad to note that it isn’t a fingerprint magnet. We never has any issue with the phone slipping out of our hands when using the case no matter if you had sweaty or wet palms either.

The black colour doesn’t have any colour bleeding issues however the white versions do. If you wear black, green or any other colour denims, we suppose the same would appear on that as well. In this case, we feel a darker colour such as the black variant would be the better choice. This colour bleeding issue has been present even on smartphones in the past such as the HTC One X in White colour.

Since it doesn’t really add much to the phone in thickness or weight, we had no issues in using the phone for extended durations whether it was for calling, browsing, gaming etc. During our time of usage, we put the phone through regular daily activities and we didn’t have any issues with scratches on the case. Perhaps over long period of use it would show up especially if put together with keys or other sharp objects, it still is good to know that your phone is safe from such scratches.

Most slim cases sacrifice on the protection part as majority of them leave the top and bottom portions unprotected. However that isn’t the case with the Slim Meta. It offers protection for the top and bottom fully which are two of the areas on your phone that is most easily prone to damage. The Note5 has a raised camera module however the case manages to recess the camera module within itself so as to protect it from scratches and smudges. You can easily place it flat on a glass, metal or wood surface without having to worry about it scratching the lens. Thanks to the soft touch, the phone does not really slide off either even on a slightly uneven surface.

On the front, the Edges of the case are raised slightly higher than the phone’s edges and sort of forms a protective lip. We expected this would hamper the use of the home button which has a fingerprint sensor in particular but it wasn’t an issue. While the case does offer a decent protection and the company does claim it protects the phone from drops, we still advise you to be careful with your phone. It may protect your phone from some falls however the case isn’t rugged enough for you to be throwing your phone around.

The Note5 is my daily driver and prior to reviewing this case I was using a Spigen Neo Hybrid CC case. I really liked that case as it didn’t really add too much of bulk and provided decent protection too and that’s why Spigen has been on the top of my list for years as I’ve had good experience with them in the past. However after trying this case, I have made this my primary case and to be honest, I feel this is better than the Neo Hybrid CC. Its thinner, offers similar protection but mainly feels much better to handle as it retains the phone’s basic shape.

While I still love Spigen and many of their cases, I reckon that Obliq is a company to watch out and this case in particular is something I’d recommend anyone with a Note5 to get as long as they want something that offers decent protection without adding much bulk. It is definitely a bit pricey at GBP 25 (Roughly Rs 2400) but considering how much the Note5 costs, it is definitely worth spending the amount to protect it. You can purchase the case through MobileFun and they offer worldwide shipping.