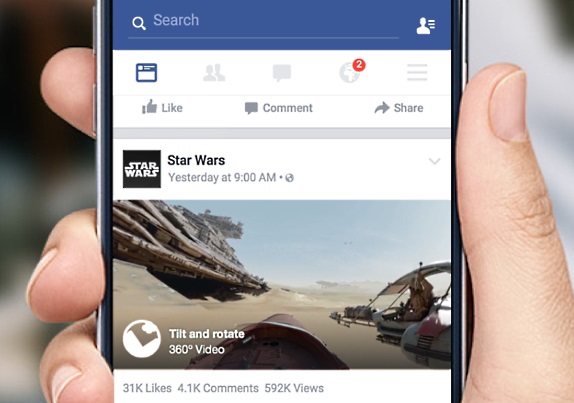 After YouTube, now Facebook will begin rolling out 360-degree videos in News Feed starting today. Company says that the users on Web and Android will be able to see 360 videos in their News Feed soon, but the iOS users will receive it in coming months.

Our goal at Facebook is to connect you with the people and things that matter, every single day. Over time, we’ve seen that people enjoy more immersive content in their News Feeds. This is one reason video has been so successful on Facebook, and we’re excited to take it a step further with 360 video.

For now, users on Web and Android will be able to see and enjoy 360-degree videos from publishers like Star Wars, Discovery, GoPro, LeBron James & Uninterrupted, NBC’s Saturday Night Live, and VICE. With these videos, Facebook wants to demonstrate the range of possibilities with the 360 content, so that more creators explore this new medium.

For example: Disney and Lucasfilm are debuting an exclusive 360 experience from its upcoming movie Star Wars: The Force Awakens, bringing fans inside the beloved Star Wars universe.

Once you have created a 360-degree video and uploaded it Facebook, it will let viewer to choose what angle they want to see it from. On the web it can simply be done by dragging around the video with the cursor, and on mobile devices it can be dragged with your finger or by turning the device.

There’s also a whole world of video creators and storytellers who are at the cutting edge of exploring this medium, and over the coming days they too will be able to upload their 360 videos to Facebook. We’re excited to see more innovative and compelling 360 videos being shared from these publishers.