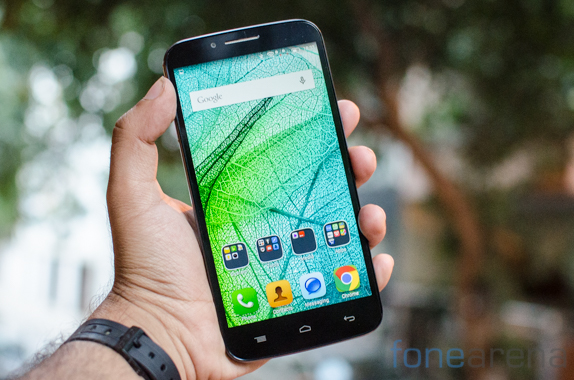 Time and time again, Panasonic has struggled to make itself feel relevant in the mobile space. Previous efforts have more or less failed to leave a mark on the Indian smartphone space and just as we thought that the company might be about to call it quits in the mobility space, we see yet another handset from the Japanese marque. The Panasonic Eluga Icon is the latest to join the company’s Eluga series of handsets that represent the upper end of their offerings. Decidedly still in the extremely crowded mid-range segment, we spent some time with the handset to gauge its worth. Here’s the FoneArena review of the Panasonic Eluga Icon .

In terms of design, the handset is an almost complete ripoff of Samsung’s Galaxy series of handsets. The back in particular looks nigh identical to the likes of the Samsung Galaxy S3. The front too incorporates elements of the Korean company’s erstwhile flagship. Perhaps a bit of inspiration might help the company garner additional sales? That certainly seems to be the only probably reasoning for this blatant plagiarism. For now though, let’s move beyond just the looks and analyze the build quality and general design of the phone. 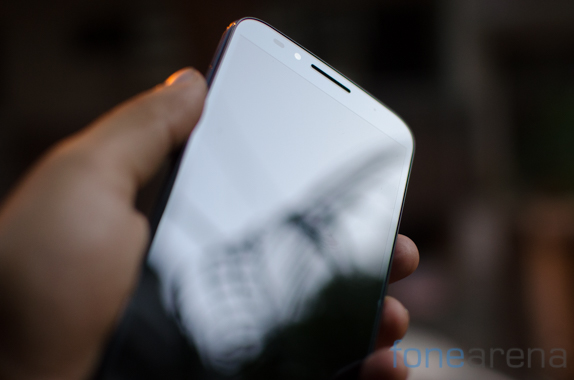 The front of the phone has a 5.5 inch display that is now common for the category. Three capacitive buttons are located below the display while up top is the front facing camera as well as the proximity sensor. 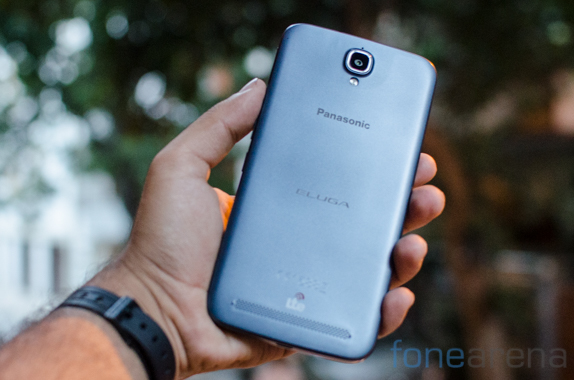 Onwards to the back and you really start seeing the Samsung like design. From the way the edges curve to the protruding camera module and all the way to the specific shade of grey used here, all of it reminds us of the Galaxy S3. Leaving that aside, the build is par for the course. It feels good enough and fairly solid but we wouldn’t want to throw this handset around. 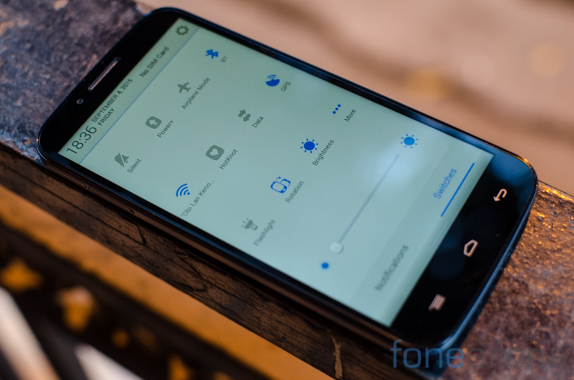 The handset measures 152.3 x 76.4 x 7.95mm which is about what you’d expect from a device packing a 5.5 inch display. We do feel that the screen to body ratio is a bit skewed and that there is a lot of wasted space here. The capacitive buttons in particular add a lot of extra space that could’ve been relegated to onscreen controls. Weighing 147g, the phone isn’t heavy at all. Kept in the pocket or in the hand, the weight never proved to be a burden which is as good as it gets with smartphones. Overall, in terms of design and build quality the handset strictly lies at the middle of the road. The design in particular is highly derivative and build quality is passable though certainly nothing exceptional.

Despite running just Android KitKat, there’s a modicum of leeway that can be afforded if the rest of the handset is good. Unfortunately with the use of their heavy handed custom UI, Panasonic has thrown that opportunity out of the park. Icon UI as it is called is yet another attempt at ‘simplification’ of Android by removing the homescreen and app launcher hierarchy. 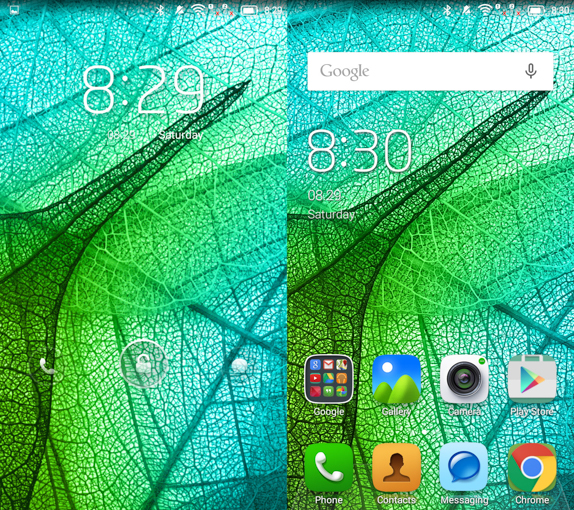 The lockscreen allows for four different shortcuts. It is possible to launch either the dialer or the messaging application directly from here. You can also tap the middle button and swipe up to activate the camera module. Swiping down from here will unlock the phone as you’d expect. The homescreen is where all the applications have been laid out. There is no two level hierarchy but you can make use of folders to organize all your applications. The rest of the Android UI navigation is the same as you’d expect. You can drop down the notification tab from the top and swipe right to get to the regular toggles for WiFi, Bluetooth amongst others. 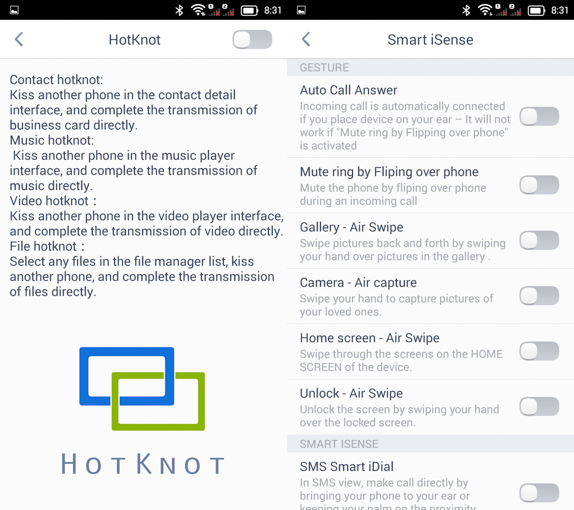 Panasonic has built in a couple of applications bringing extra features that you may or may not find handy. A lot of these are gesture dependent and don’t work all that well. The basic ones like flipping over to mute your phone aren’t problematic but more advanced features like Air Swipe that lets you scroll through homescreens based on hand gestures are rather hit or miss. Of course, given that this is a camera dependent feature effectiveness really depends on the ambient lighting conditions. 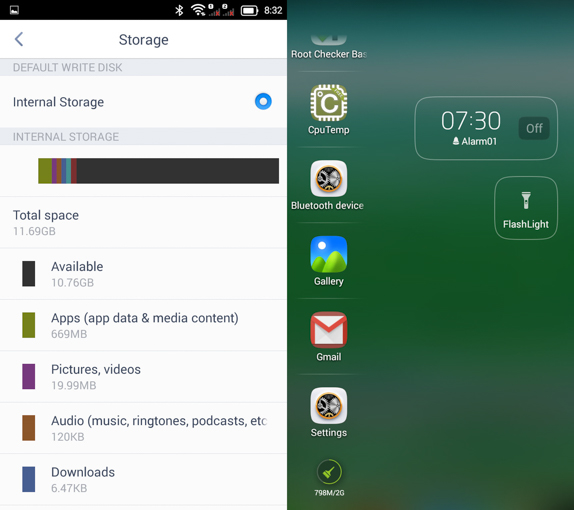 We’re not really fond of manufacturer ordained modifications of Android and while we can tolerate basic UI tweaks and changes, more in-depth changes are not something we approve of. Case in point, the multitasking menu that has been completely redesigned. Activating it requires double tapping the home button upon which brings you to the display that you can see up on the right. There are some added features like the ability to free up RAM (something which you shouldn’t be messing around with), a flashlight toggle and the ability to set alarms. That said, we’d have much preferred the regular Android multitasking menu which is vastly superior as a means to toggle between applications.

The Panasonic Eluga Icon is powered by a 1.5 GHz Octa-Core 64-bit MediaTek MT6752 processor with Mali T760 GPU paired with 2GB of RAM. The phone is certainly not a powerhouse but generally putters on well enough for day to day usage. We did notice a couple of frame drops while gaming and heavy multitasking can on occasion cause the phone to lag. For every day usage though, the phone performs as expected and there’s little to complain here. We ran the phone through a spate of benchmarks and you can see the results below. 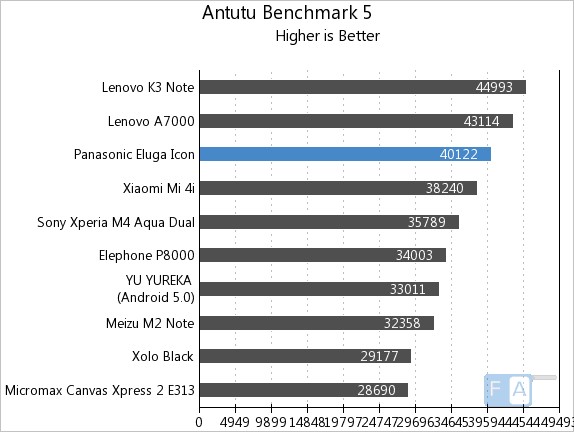 In the AnTuTu benchmark, the Panasonic Eluga Icon scores 40122 points. 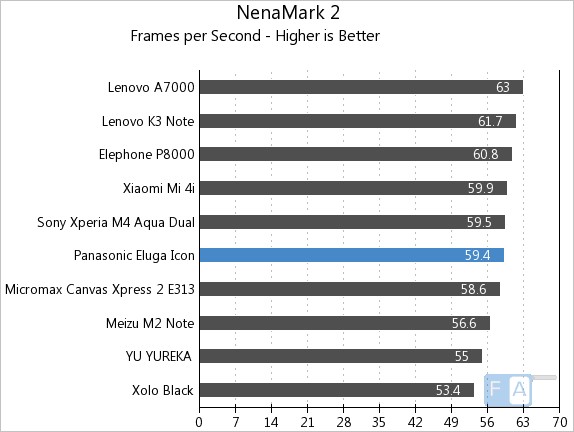 In the GPU centric Nenamark benchmark, the phone got as high as 59.4 frames per second which places it right in line with the competition. 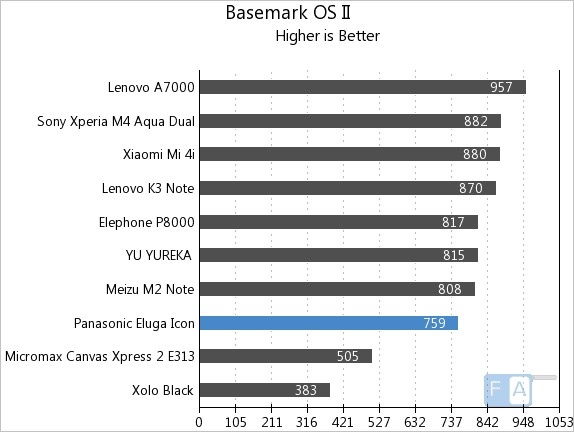 The Panasonic Eluga Icon scored 759 points in the Basemark OS II benchmark that places it towards the lower end of the benchmark.

Equipped with a 13MP camera and a single LED flash, the Panasonic Eluga Icon comes as a handset geared towards photography. A front facing 8MP camera unit is also present for high resolution selfies. 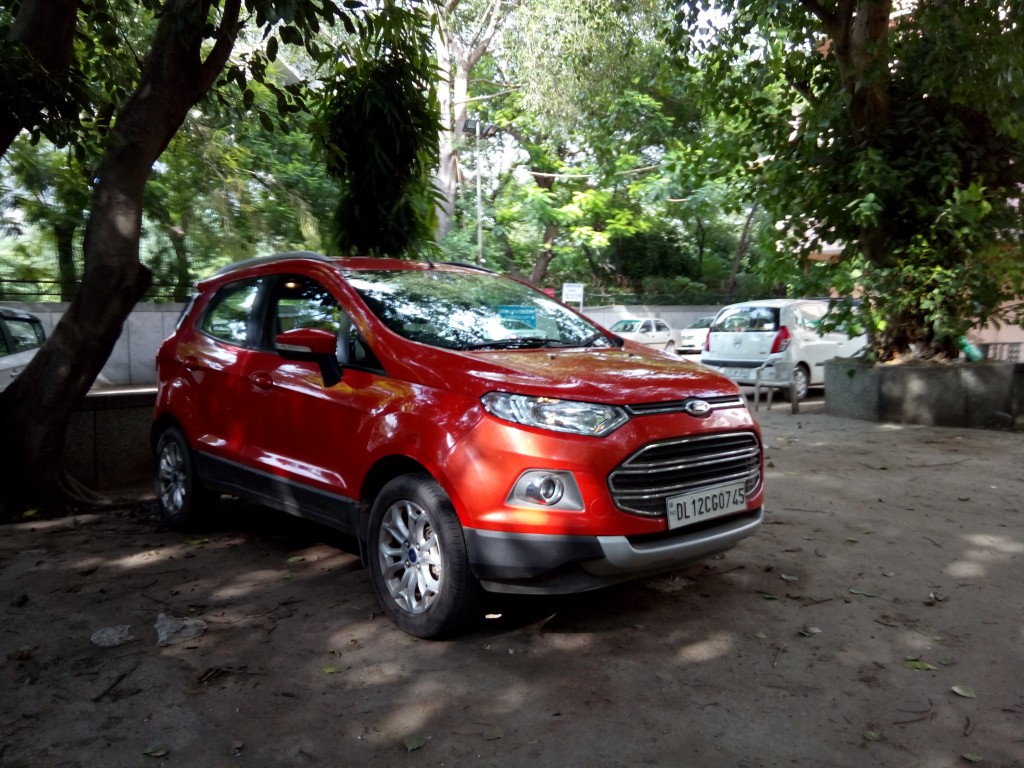 We must admit that we were pleasantly surprised by the camera unit on the Panasonic Eluga Icon. Noise levels were mostly under control and the images had exposure levels under control which is something that many entry level handsets struggle with.

Though generally good with getting a focus lock, this became a bit of hit or miss in lower lighting conditions. We were suitably impressed by the macro focussing capabilities of the Eluga Icon.

With a resolution of 1280×720 pixels you’d be right to be disappointed. While the panel is bright and vibrant, the low resolution display makes everything appear just slightly blurred out. 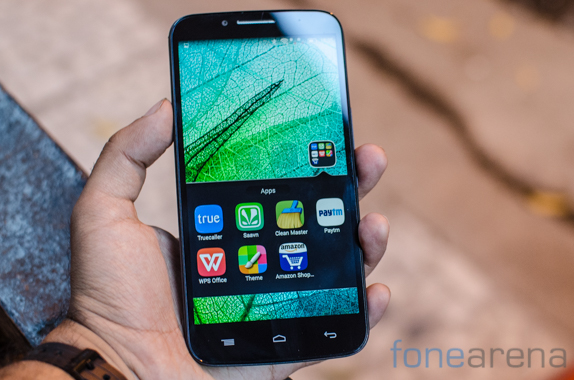 We noticed that brightness levels of the panel were exceptionally good making the Eluga Icon very easy to view in broad daylight. Conversely the contrast ratio was a bit lower than the competition. This isn’t the most natural looking screen around and the resolution is lower than what you’d expect today but if outdoor visibility is paramount then you can’t really go wrong with this.

Connectivity options on the handset include 4G LTE / 3G HSPA+, WiFi 802.11 b/g/n, Bluetooth 4.0, GPS which is par for the course. Increasingly we are seeing mobile phones with a built in iR port that lets you control other devices with your phone. Unfortunately the Eluga Icon is missing that but we can’t really hold it against the handset. Out of the built in 16GB of storage, there is just under 11GB available. You can expand that via a microSD card as well as via a USB drive considering the phone supports USB OTG.

Talking about battery life, Panasonic has really hit it out of the park with the Eluga Icon. While the 3,500 mAh battery is in itself large enough to facilitate good longevity off the charger, the software too is very well optimized. We could easily get a day and a half of mixed usage from the device and could stretch it to two days with basic use. Heavy multimedia users too should be able to get a full day of usage from this handset.

The Panasonic Eluga Icon isn’t a handset that wows you the moment you set your eyes on it. We’d even go as far as saying that if looks are all that matter, this handset didn’t really impress us at all. Indeed, the derivative design and the initial impressions of looking at the low resolution display can be quite a turn off but we’d implore you to dig deeper. 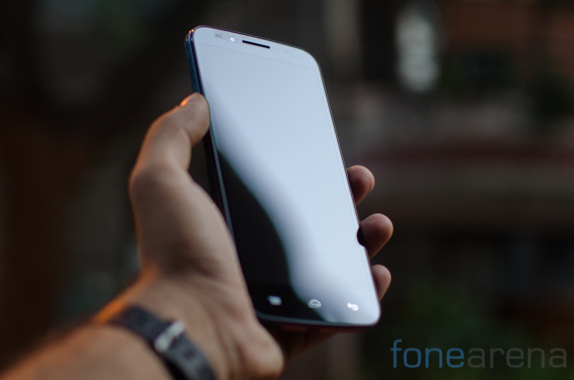 Yes, the software is anything but pure Android. Yes, you can get more powerful hardware around the price point. But as an overall package, it is one of the few handsets that do well enough in all categories. The camera on the Panasonic Eluga Icon is one of the better ones we’ve noticed in the category and the battery life impresses. The software is optimized enough to not lag throughout the interface. Would the Eluga Icon be our top recommendation for a budget smartphone? Probably not but we’d certainly ask you to consider it and give it a shot to see if it fits your requirements.