Huawei’s upcoming smartphone, the Mate S is expected to be announced next month at IFA in Berlin. The phone is now listed on Oppomart online store. 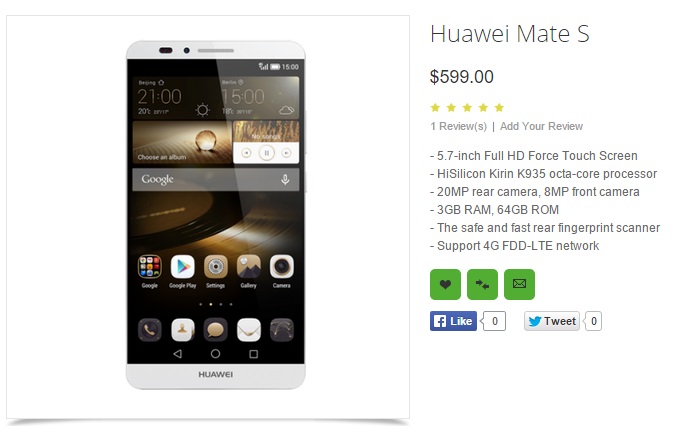 As per the listing, the phone sports a 5.7 inch display with 1080 x 1920 resolution and is powered by a company’s own Kirin 935 chipset, which includes an octa-core CPU and the Mali-T628 GPU. The main feature of the phone is said to be Force Touch, which is a technology that allows the device to distinguish between a light and a strong touch on the screen. Apple is expected to add this feature to its upcoming iPhone 6S and iPad Pro.

The Huawei Mate S comes with 3GB of LPDDR4 RAM, 64GB of expandable internal storage and has a 20MP rear and 8MP front camera. It runs on latest Android 5.1 with Emotion 3.1 running on top and has a 4100mAh battery. Moving on, the phone supports 4G LTE and also has a fingerprint scanner. The listing shows the Mate S priced at $599.