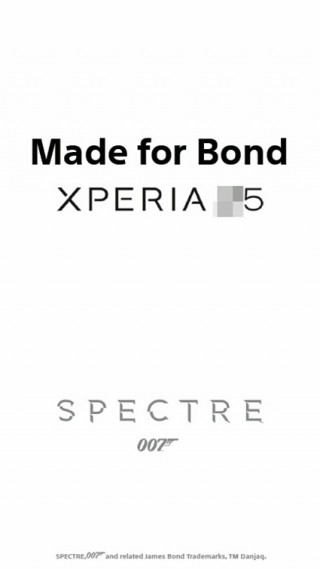 Sony has been partnering with the James Bond franchise ever since Casino Royale. Now, it is expected that the upcoming Sony XPERIA Z5 smartphone which could be the 2015 flagship for the 2nd half of the year will make an appearance in the upcoming James Bond film titled ‘Spectre’.

In a new teaser that has been released by Sony, we see the Made for Bond slogan along with XPERIA _5 written underneath. Since the letter before the 5 has been blurred out, we can only speculate that this will be the upcoming Z5 flagship smartphone as that would be the ideal product to place in such a high-tech spy thriller film.

The film is set for a release in November 2015 and we could expect to see the phone make an appearence in it. While we aren’t sure if Sony plans to release or even announce the phone before that, it will definitely cause some confusion to consumers if they go ahead with the XPERIA Z5 as the name especially since the XPERIA Z4 is known as the Z3+ internationally.