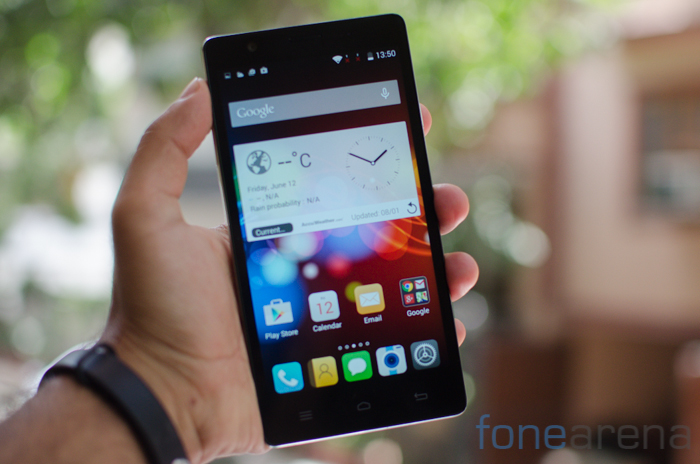 The game of smartphone market share is huge in India and everyone wants a slice of the pie. Relatively new entrant, InFocus, recently launched a new handset dubbed the M330. A large handset deserving of the ‘phablet’ moniker, it brings a price and specifications that are certainly satisfactory for the class of products it competes against. We put the phone through its paces to see how well it competes with the existing stalwarts. 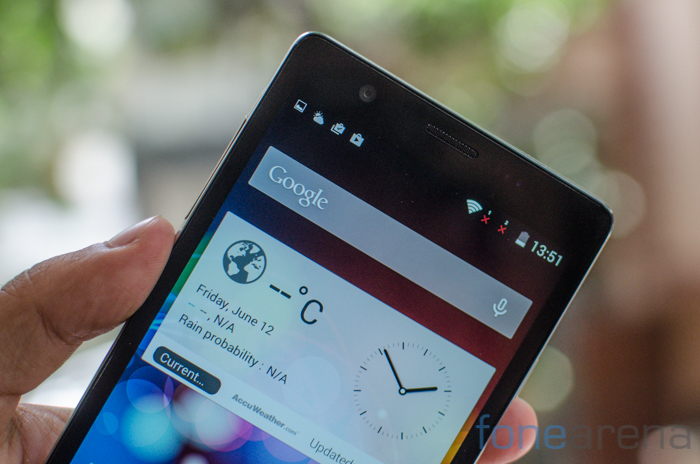 Generic is perhaps the best term to describe the design of the InFocus M330. There’s no standout design element here but we’re okay with that given the high quality materials used. Yes, the M330 might not be the most stylish phone out there but it is certainly well built. The front of the phone has a 5.5inch panel with a bezel running around it. The lack of backlighting in the capacitive buttons lined up below the screen could pose a problem. The top of the phone sports the front facing camera.

The InFocus M330 is a large handset no doubt but the ergonomics are decent enough. The volume keys and power button are located to the left and the right of phone. While travel could’ve been better, we found the location to be almost perfect given the size of the handset. Using a large phone will always be a chore but small gestures like placing the keys appropriately can go a long way in improving daily usability. Rounding up the button and port selection are the microUSB and 3.5mm headphone ports which are placed at the bottom and top respectively. 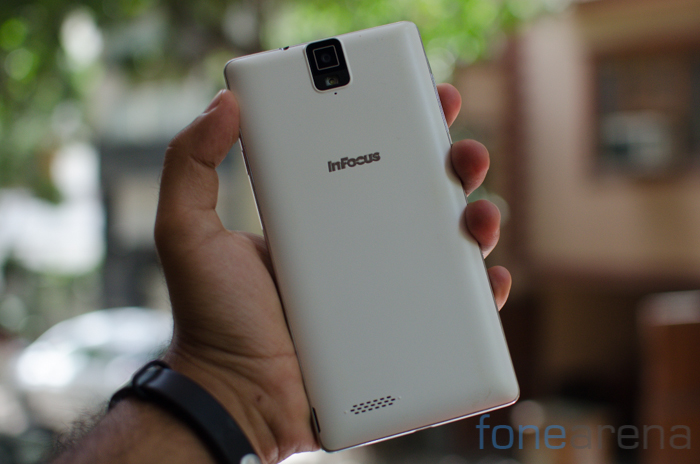 The back of the InFocus M330 has a smooth white finish with subtle branding towards the center. The speaker grille is located towards the bottom of the phone. Up top lies the camera module which is surrounded by a black island of sorts. This integrates the LED flash and also acts as protection against scratches. The SIM card slots and the microSD card slots are all placed behind the removable back cover. We found that the weight of the handset was well distributed across the considerable size of the phone making it feel quite light in the hand. Overall, it seems like Infocus prioritized quality over a flashy design and we’re quite alright after seeing the results. The Infocus M330 is a well built phone that combines plastics with a metal rim to create a handset that can survive your day to day usage.

Like most Chinese entrants, the Infocus M330 too opts for a custom interface layer that strips away most of the design sensibilities put forward by Google. The phone runs Android 4.4.2 KitKat which is positively ancient considering most smartphones have migrated to the Lollipop release. The InLife skin on top further makes the phone look ancient. The icons are large and unappealing to look at. 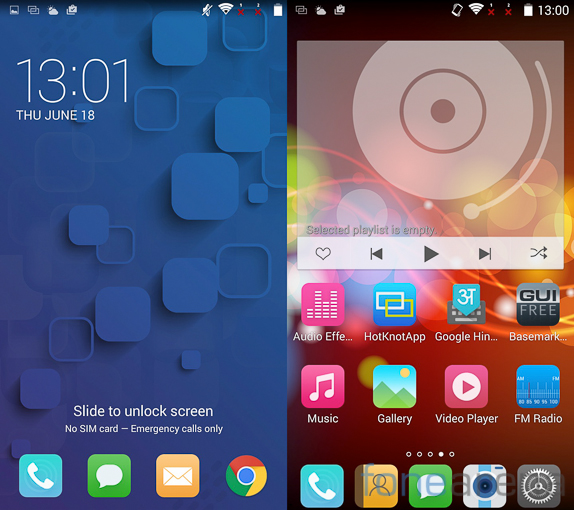 The phone lacks an app drawer and you’ll want to install a third party launcher on the phone. App icons are on the larger side of the spectrum making them a bit of an eye sore. This carries forward to the notification center as well that looks like something straight from the Android 2.3 era given it’s jarring UI elements and massive toggle switches. 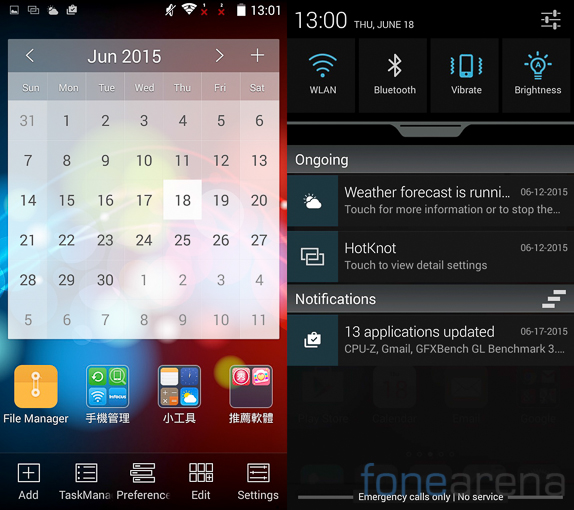 For all their focus on hardware quality, the software on the Infocus M330 is a real eye sore. The handset comes with a couple of applications preloaded but barring the gimmicky MeituPic and BeautyCam applications, the others were fairly useful additions.

As far as budget handsets go, the InFocus M330 comes fairly well endowed. Between the 1.7 GHz Octa-Core MediaTek MT6592 processor and 2GB of RAM, the phone is competitive. Thanks to well optimized software and a chipset that is known for delivering consistently reliable performance, we were quite satisfied by the usage experience of the M330. The phone powers through the interface and UI elements effortlessly. Multitasking between applications and running high end games isn’t a chore for the device. The M330 is not going to replace your flagship handset but it can certainly hold it’s own in the entry level category and is sufficiently powerful for the average user. We’ve included a range of benchmark results below to give you some comparative information about the performance of the handset. 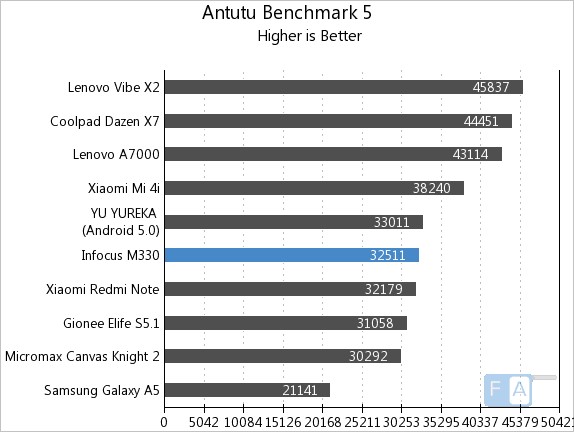 The all encompassing AnTuTu benchmark results in a score of 32511. This places it in line with other phones around the same price point. 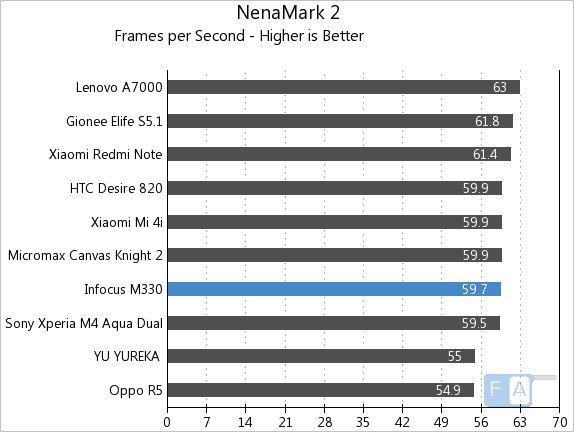 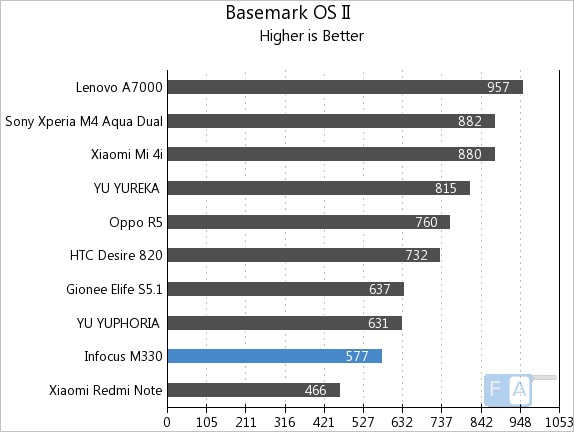 Basemark OS II is an all encompassing benchmark that evaluates system, memory, graphics, web browsing and camera performance. The InFocus M330 scores 577 points in the benchmark.

For a budget handset, we were quite surprised by the display onboard the InFocus M330. The display is well saturated and the contrast ratio is good enough though a bit limited. Infocus has opted for colors that appear a bit more natural and hence muted. 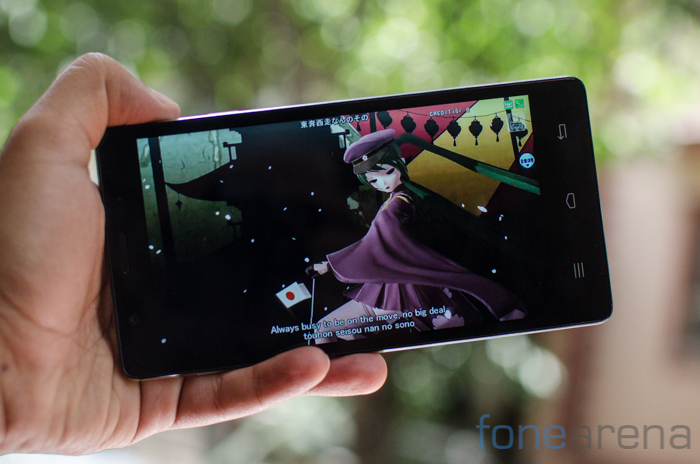 The panel being used is a 5.5inch IPS LCD display that has a resolution of 1280×720 pixels. With a pixel density of 267 ppi, we believe it is more than satisfactory for the category of devices. Where the problem lies is in the brightness levels that aren’t high enough for direct sunlight. Add to it the glossy & reflective screen and sunlight readability goes for a toss. A Gorilla Glass 2 layer lies on top to protect the screen from scratches but going by our experience, you’d be well served by a decent screen protector as we noticed micro scratches on the display despite careful handling.

On paper, the InFocus M330 appears to be a great camera phone. A rear facing 13MP sensor with a Sony Exmor R sensor, f/2.2 aperture is nothing to scoff, a similarly specced front facing 8MP camera with an f/2.4 aperture are sure to be sufficient for anyone looking for a good camera phone on a budget. Unfortunately, output from the camera was less than optimal. Colors were prone to be muted and details were smudged out more often than not. 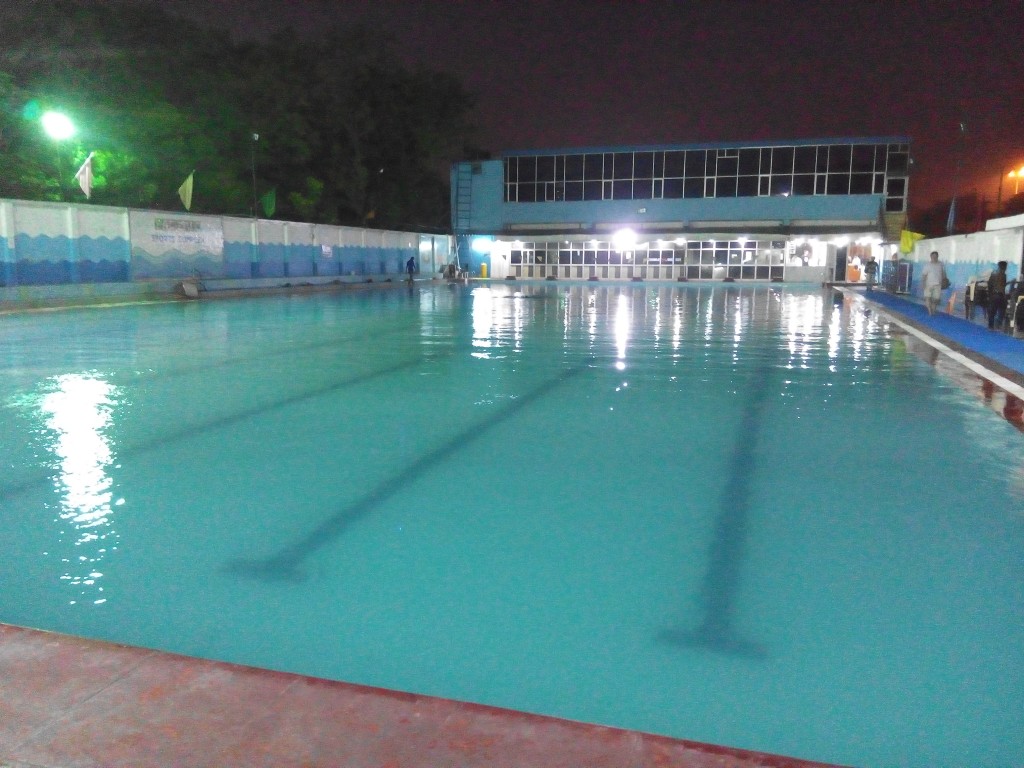 There was a lot of chromatic aberration observed in shots. We liked that the low light shots were relatively free of noise but the trade off was the heavy loss in details which ensured that images weren’t particularly useful. The worst experience though was while shooting in a brightly lit scenario like shooting in direct summer sunlight. Here the camera struggled to get any semblance of natural colors. The white balance proved to be totally off and the surface textures were completely blown out due to the lack of dynamic range. We expected more from the camera on the InFocus M330. Under very specific scenarios, the M330 can produce shots that are adequate.

The InFocus M330 comes equipped with the usual range of connectivity features. This includes 3G HSPA+, WiFi 802.11 b/g/n, Bluetooth 4.0 and GPS. Of the 16GB of built in storage, there’s about 11.5GB available at launch. You can use the microSD card for expansion. The phone is also equipped with microSD expansion. In addition, the handset supports USB OTG for attaching USB drives to the phone. Removing the rear panel you’ll spot the dual SIM card slots. Given that the competition has started offering 4G compatibility in the same price range, it is a bit disheartening to see that M330 lacks LTE radios but it really isn’t a deal breaker in our opinion. 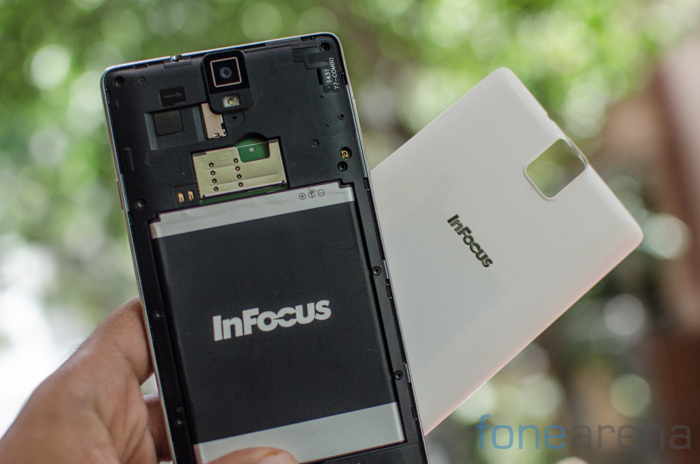 A relatively large 3100 mAh battery powers the device and works well in tandem with software optimizations to ensure that battery life is rarely a concern. With a regular usage pattern the phone would always last us a full work day and then some. Unless you are spending multiple hours playing high end 3D games, we doubt you’ll need to recharge the handset during the course of the day.

The InFocus M330 is a good phone that just doesn’t pack enough to stand out next to the competition. The build quality is good but the design is bland. The performance is good but the software interface is uninspired. The camera too is nothing to write home about. This places the M330 in a precarious situation where it is good enough but the competition is even better. Though you can’t really go wrong with the InFocus M330, you should take a long and hard look at the Xiaomi Redmi Note 4G or the Lenovo A7000. The phone is priced at Rs. 9,499.