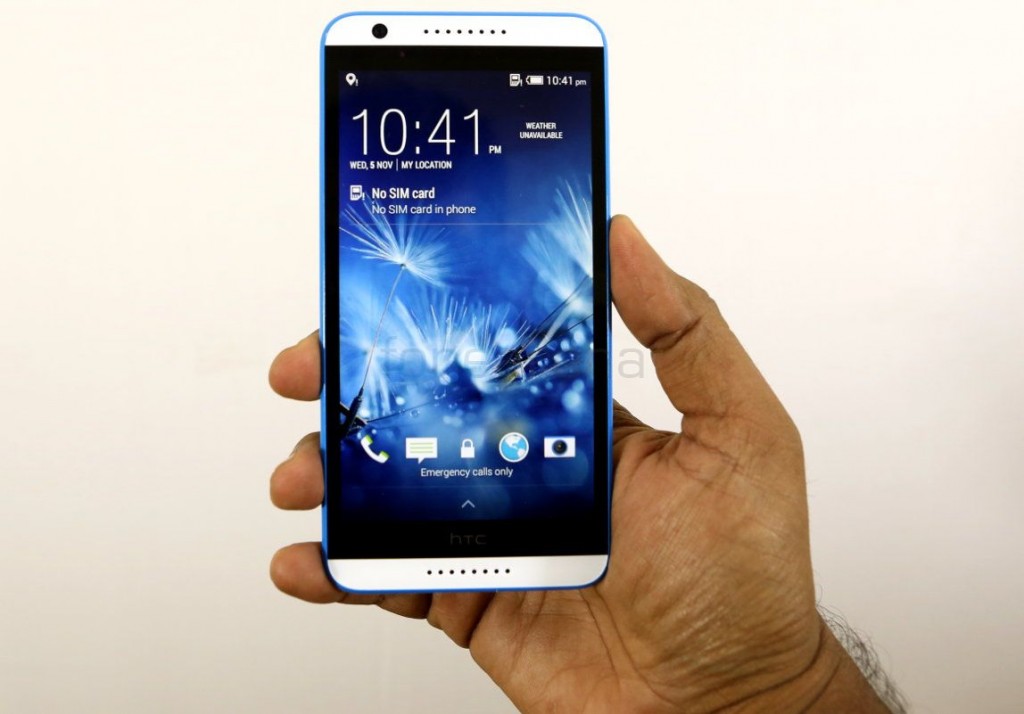 HTC, as a company, was going the wrong way for a while. For example, in May 2013, the company released a Snapdragon 200-powered Desire 600 with a 4.5 inch qHD display that cost people 27k rupees. The company had vowed to fix these things and bring its products back in line with consumer expectations, after which the Desire 816 happened. It was a mid range phablet with an affordable price tag and solid specifications. The Desire 820 (Rs. 24,999) is its spiritual successor, carrying forward all the positives of the 816, trying to add more value and keep up with the times. Does it succeed? Lets find out.

HTC’s design language is mostly based on its flagship devices these days and the 820 is no exception. It follows the legacy set by 816, with a similar design with many tweaks. Tweaks include a two-tone design, which looks way more appealing than solid colours, switching the places of buttons and slots on the sides, making it easier for right handed people and more colour choices, with matte finishes. Curiously, most of the on-lookers didn’t ask which device I had, but directly asked whether it was a HTC One variant. Looks like the design language is now popular enough for people to relate it to a high quality HTC device, and we bet this is what HTC wanted too. As you can see from the photos above, we have the white-blue dual tone variant, which has a glossy finish. As expected, the plastic back is prone to fingerprints and scratches, so it’s better to put a slim case on it. 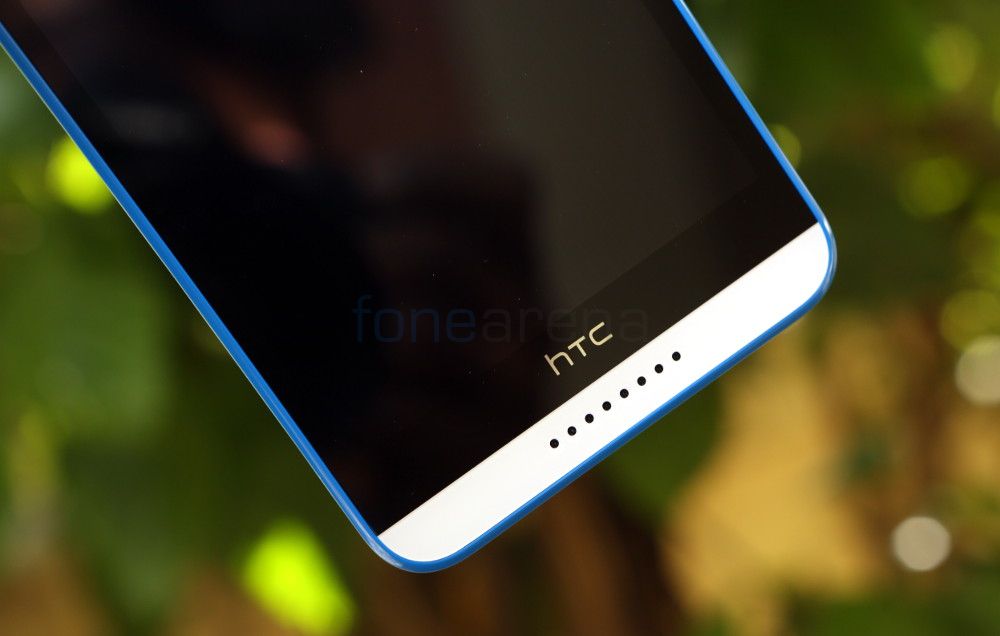 On the ergonomics side, we would like to remind you that the Desire 820 is a big phone, with a 5.5″ screen and large bezels. Yes, it is absolutely the same size as the 816, in fact, it’s the exact same size as an iPhone 6 plus, in terms of height and width. Handling it is tough, if you have small hands, but you might have already known this by now, with the number of huge affordable phablets making their way into people’s hands. However, people with larger hands will find it much easier to use, mainly because of the grip the plastic offers. It never slipped from my hands, so dropping it tends to be a rarity, which is a good thing really. 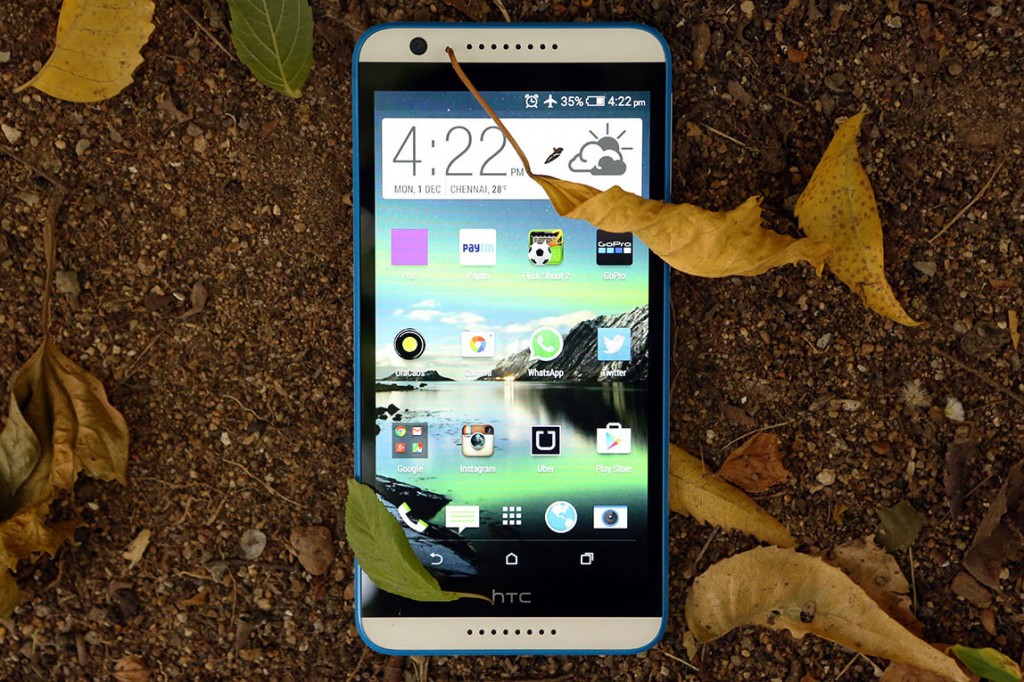 Let’s focus on the hardware highlights now, starting with the display. The Desire 820 comes with a 5.5″ screen boasting the same 720p resolution that the 816 had. HTC could have gone for a 1080p panel, but we all know that resolution isn’t the only thing that matters. What matters is if the display is good enough for reading, browsing, watching videos, outdoor visibility and colour reproduction in all angles. The 820’s display aces it in each and every department, except may be in the viewing angle one, but still, good enough. The 720p display has a pixel density of 267 ppi, which isn’t too bad, but the size entails a software problem if manufacturers aren’t too careful, scaling. We have talked about this before, but that is the only problem with the display, and that too, only on the software side. More on that later. 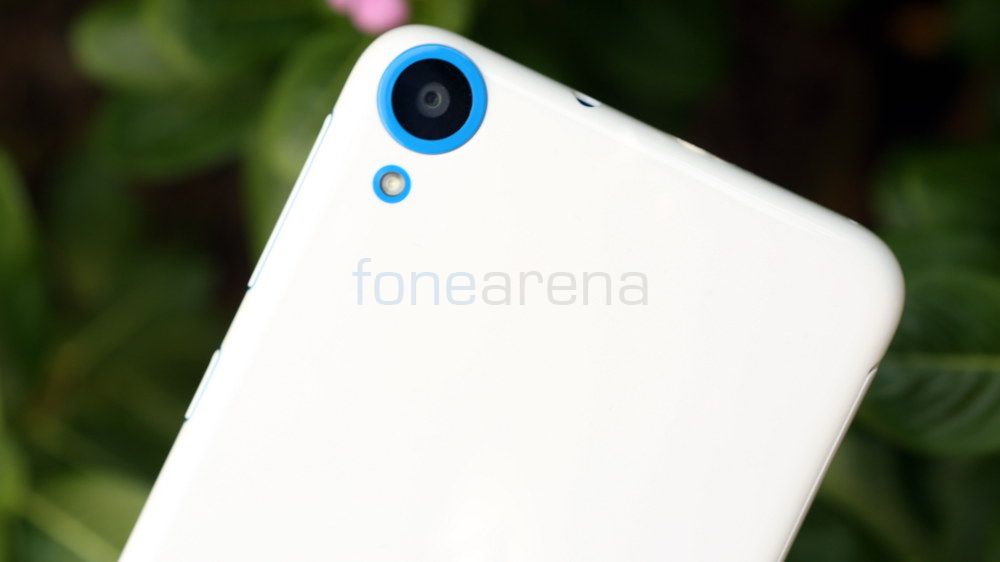 The Desire 820 comes with the same camera as the 816 for the one at the back, but the front facing one gains an upgrade to 8 megapixels. Not to say that this massively improves the quality of images it takes, but more resolution for the front camera is a clear indication that HTC is going for the younger generation with this one. If you haven’t heard of the word “selfie” yet, you were probably in a cryo-sleep till now, because it has already taken over the world and companies now truly understand its power. HTC knows, so the 820 has an 8 megapixel camera at the front, which definitely doesn’t live up to the expectations the number creates. The rear camera being the same, is enhanced with HTC’s software tricks, with its Sense camera features playing the main harboring role rather than the hardware, which, at the price it comes at, is not too bad. We had extensively talked about it in the camera review video we had made, watch –

As you can see from the video, the rear facing camera is decent and, sometimes, really good for what it is. The 13 megapixel sensor is covered by a f2.2 lens that manages to resolve good amount of detail in most lighting conditions, although we would like to see HTC improve its camera algorithms for better colour reproduction. Yes, the colours are washed out sometimes, and a small tweak could have resulted in much better output. Let’s hope HTC considers. Anyways, here are the camera samples shown off in the video, in full resolution. 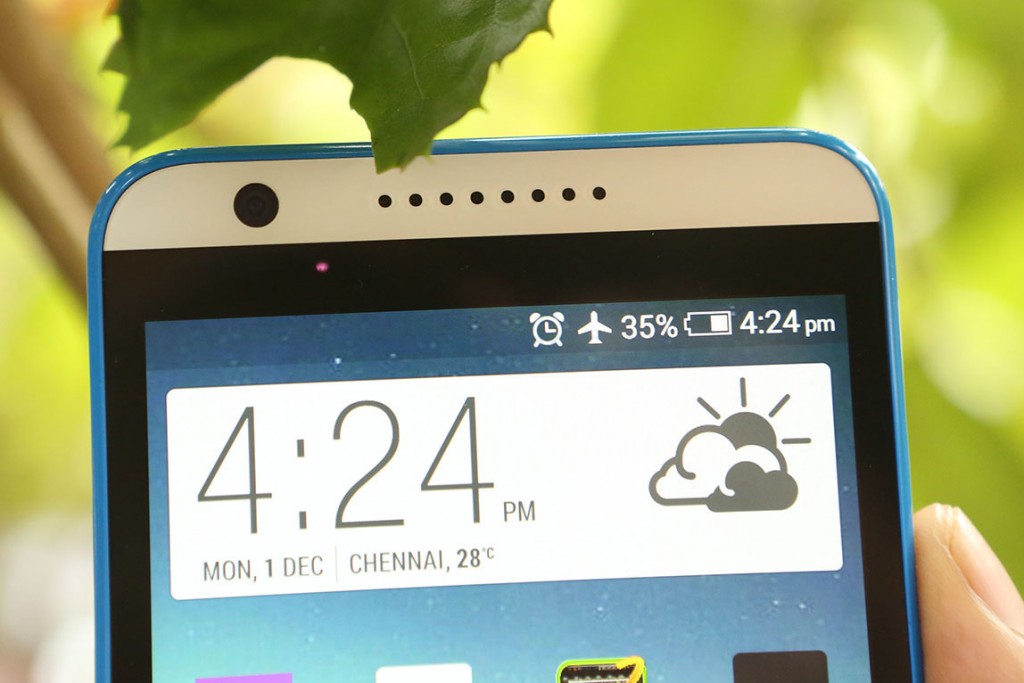 Coming back to the “selfie” camera at the front, the images were alright, but 8 megapixels are highly unnecessary for the quality of images it takes. We don’t need more bad detail, we just need decent amount of good detail, because what the camera resolves, most of the times, is our face. HTC has added beautification enhancements, a must-have feature across the borders in China, as we rarely see people using it here or elsewhere, so it finds its way as an important feature in the UI. 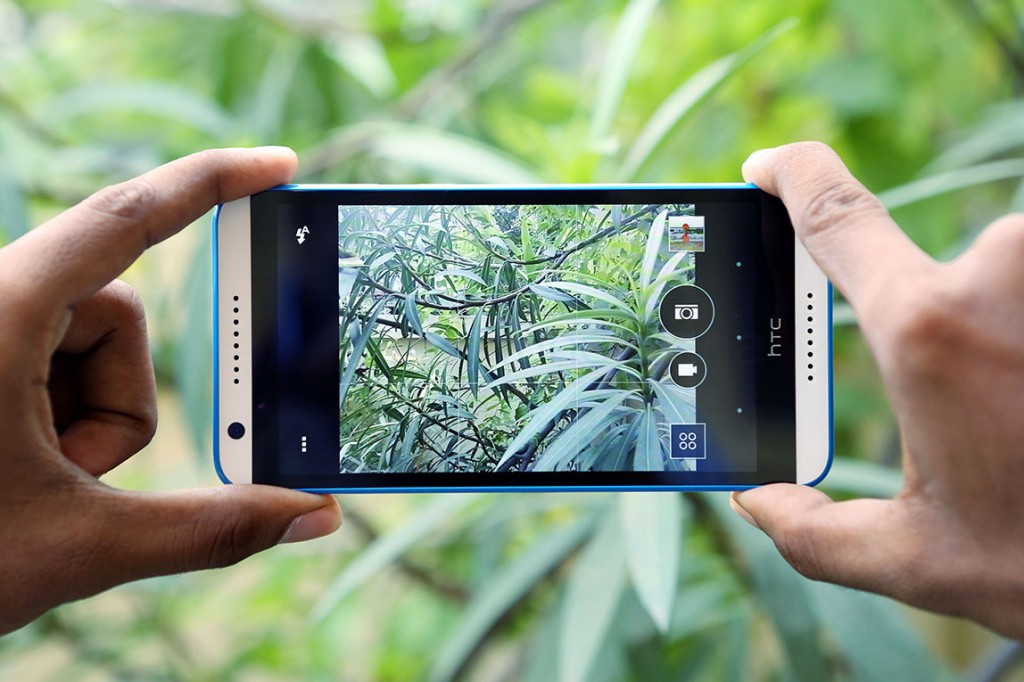 Talking of the UI, the camera software, although feature rich with tons of features like the manual mode, slow motion video and so on, it initially gave us a lot of trouble. This was before an update fixed all of its issues and added some more features. The camera would stop showing us the gallery thumbnail and would ask us if we want to save the photo, and then crash. There was no way to preview photos from the camera, even if it was not opened from the lockscreen, which was weird, but we are now glad they fixed it, as it has become effortless since.

Performance and other hardware 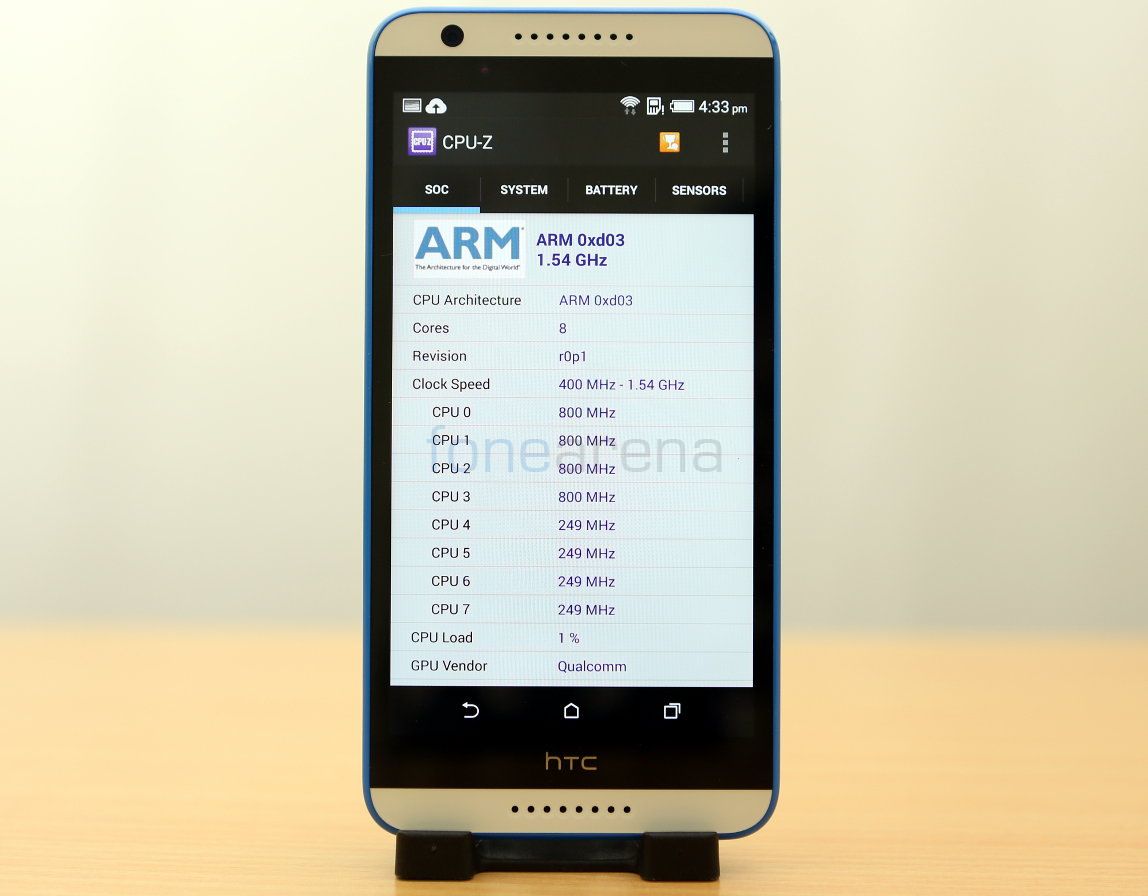 Moving on to performance, the HTC Desire 820 is powered by the Octa-Core Qualcomm Snapdragon 615 processor, with the Adreno 405 GPU powering the gaming experience and more. This is one of the first devices to use this new chipset, so obviously, there are some implications, both positive and negative. Positive ones being better performance, objectively, than the Desire 816, and then there is the fact that it is one of those rare few phones out there with a 64-bit capable processor. Android Lollipop is the only version of the operating system that currently supports 64-bit applications, so the chipset is of no-use here but of course, it’s future proof and clearly, that’s HTC’s intention, we believe.

On the negative side is the problem of over-heating. The Redmi 1s was the most recent phone that was plagued with heating issues and, lets face it, it’s not new to the mobile industry. New chipsets are released by the boat loads and some of them are not properly optimized to keep TDP under control. We fear that’s the same case with the Desire 820 too, because even after we found the phone to be over heating at times, it was completely random. Sometimes it heated up while playing casual games, sometimes it doesn’t. It heated up once while using the camera, hasn’t happened ever since but found it randomly heating up when using data. It’s completely unpredictable and we are not even sure what’s causing it to heat. But to our advantage, it didn’t heat up too many times, like we had expected and in our course of usage. But this doesn’t mean the overheating is not a problem, because it is totally unpredictable and could be a completely different experience for you. Let’s just hope HTC fixes it soon.

That aside, to get an objective view of the raw performance the chip can deliver, we ran benchmarks to find out how it compared with the competition. 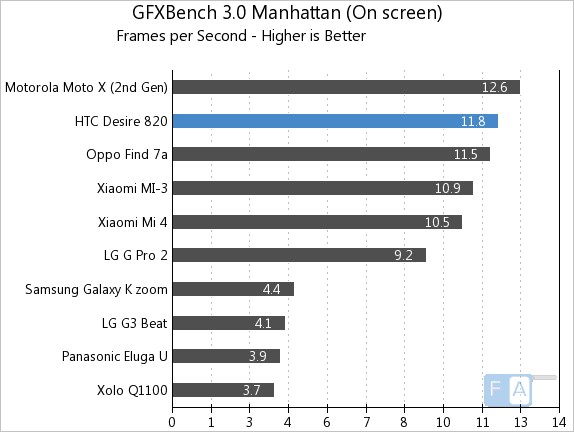 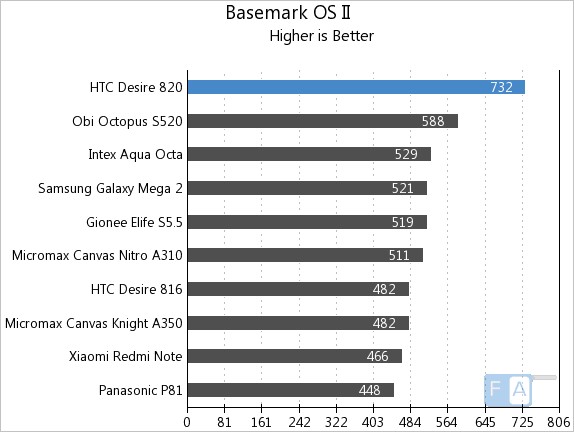 What we need to understand here is that the performance is almost on par with other Octa core mid range devices and definitely better than the now-standard Snapdragon 400 that was used in the 816. So keeping up with the times, seems to be the reason the 816 was refreshed probably too soon. In terms of real life usage, the performance is slightly bogged down by the heavy Sense UI, but things keep going thanks to the 2 GB of RAM. On the storage side, we have 16 GB of internal storage available for use, with around 10.1 GB free for the user. Additionally, you can install a micro SD card to expand it, in case you need it. On the connectivity side, you have two nano SIM slots that work as expected and all the other usual features like BT 4.0, WiFi, FM Radio and so on. 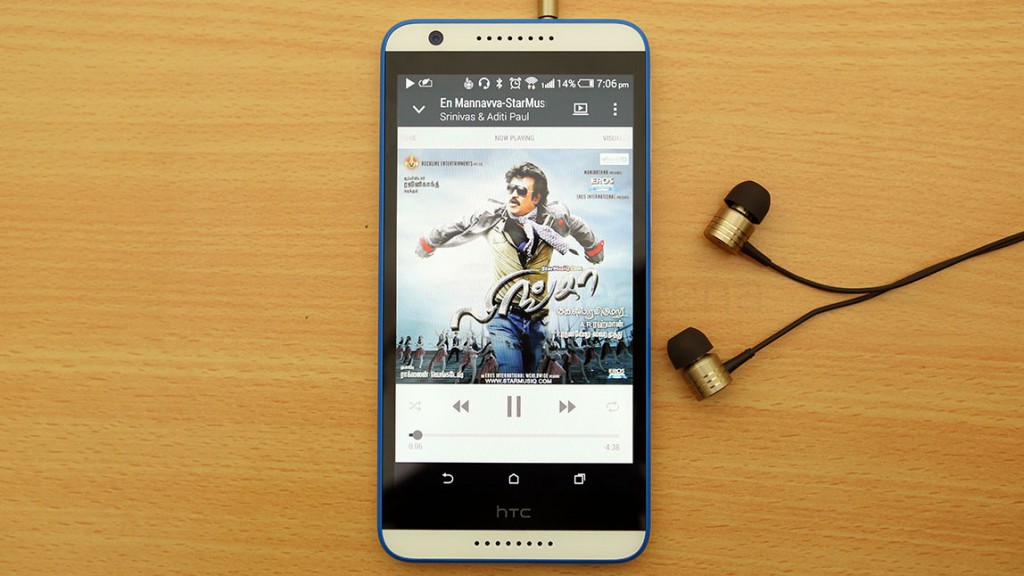 One of the best hardware innovations, although minor, from HTC is the Boomsound speakers at the front. Easily one of the best things about this phone. Being a phablet, it is geared towards media consumption, meaning a lot of videos. We all watch lots of video these days and speakers are most important for a group watching experience. This is where the position and the performance come in aid of the Desire 820. The output is loud, clear and there are absolutely no blocking positions as the speakers are out at the front. 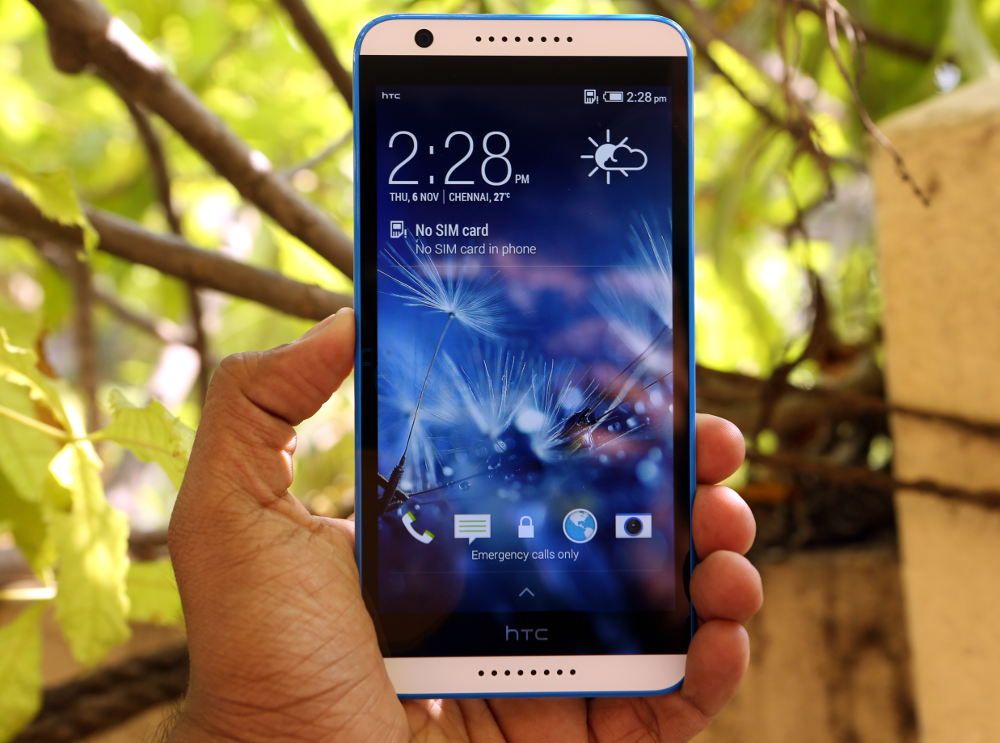 Coming to software, the phone runs on Android 4.4.2 KitKat, with the HTC Sense UI on top. The flavour of sense that you get on the Desire 820 is no different from the one on the flagship, the HTC One, so the experience remains mostly the same. Mostly, because there are not fringe benefits like for example, the double tap to wake is absent on this phone (would have been great to have it, especially on a phablet), you don’t get the exact same features for the camera UI, but you do get most of the visual ones, which make the experience much better than other custom UIs. 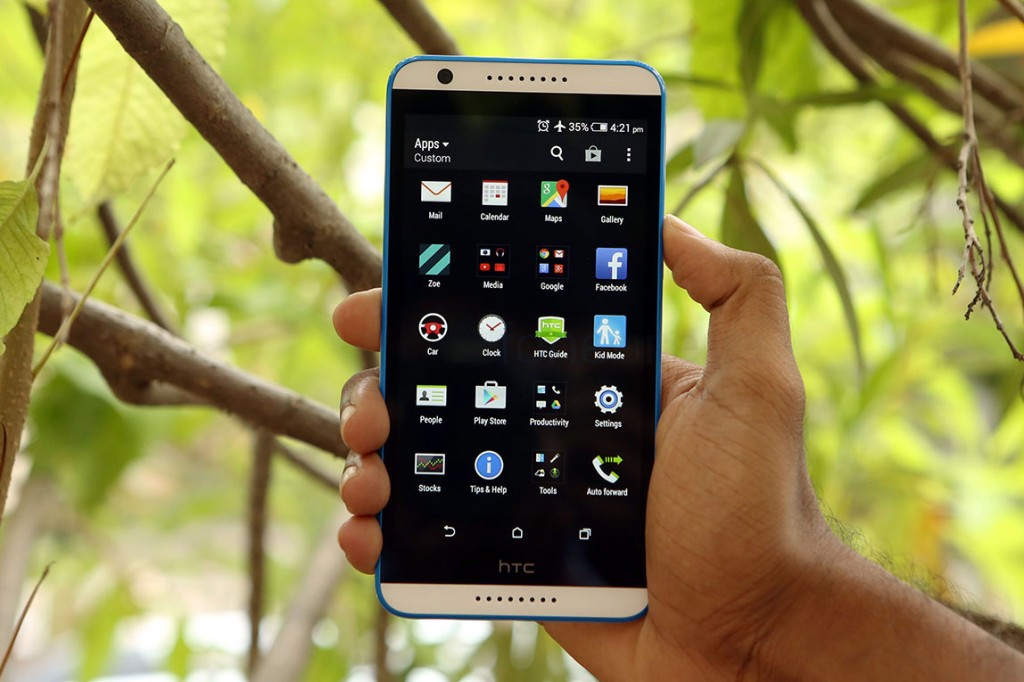 HTC’s latest version of the Sense UI is not only pleasing to look at, it is also full of features with one of the prominent experiences being Blinkfeed, a social aggregator that links to your accounts on first use. The quick settings menu has a lot more useful toggles and the out of the box experience is complete, with necessary tools like a file manager, flashlight and so on. Like we mentioned before, the UI is also one of the most consistently designed ones, with pleasing aesthetics and good performance. But again, the only problem is scaling. This is a 5.5 inch screen, so content needs to scale properly, which doesn’t happen on the Desire 820. This is a minor issue but it’s been a gripe with HTC devices for a while now. Remember the HTC One Max? It had the scaling issue too. On the software side, this is the only thing we want HTC to fix.

Armed with a 2,600 mAH battery, the Desire 820 lasts for a day, under best circumstances. You will definitely have to charge it everyday, because there are always high chances of charging your device mid-day. Standby is not so great, but battery life under heavy usage is good enough for lasting a work day, if the phone starts with 100% in the beginning. We will be posting our battery test results in a day, hang on tight. 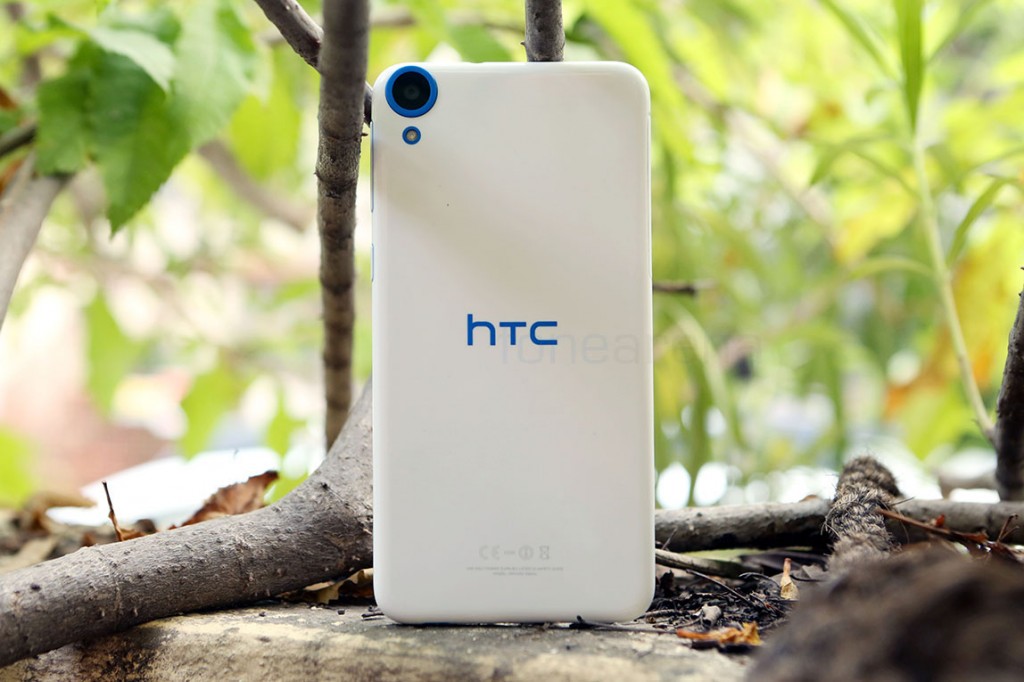 In the end, the Desire 820 takes forward what the 816 was good at, mobile multimedia consumption. With a better dual tone design and more powerful internals, the 820 proves to be decent on paper, but with Boomsound and the great display, the phablet proves to be a great entertainment device on-the-go at a price tag that doesn’t break your bank. For Rs. 24,900, it’s hard to get a better multimedia phablet. To summarize, listed here are the pros and cons of this device –