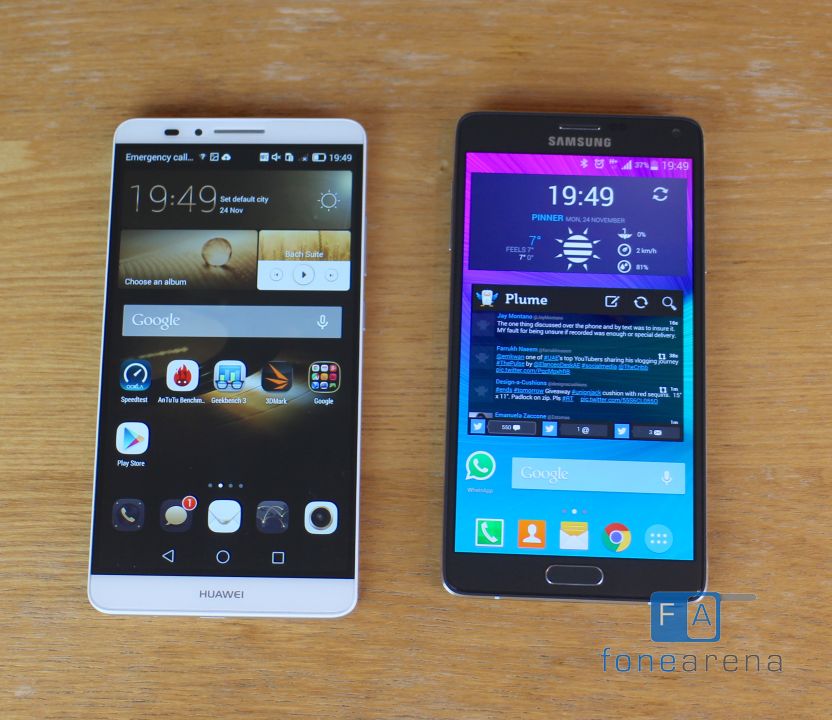 The biggest trend in mobile over the past few years has been the move to even bigger displays with users eager to consume even more on a single display. Samsung were arguably the founders of this trend with the Samsung Galaxy Note back at IFA 2011 but since then, almost every company has introduced phablets to try to attain the same success (including Apple with the iPhone 6 Plus). Chinese manufacturer Huawei pose one of the biggest threats to Samsung’s dominance at the top of the smartphone market but how does the Huawei Ascend Mate 7 compare to the Samsung Galaxy Note 4? 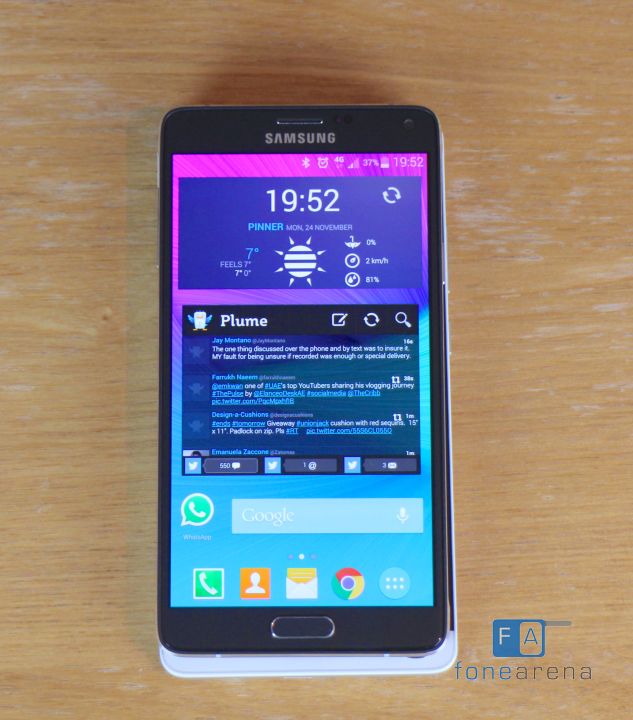 The Galaxy Note 4 features a 5.7 inch Quad HD (2k) Super AMOLED display whilst the Ascend Mate 7 sports a 6 inch Full HD IPS display. Samsung are the world leaders in display technology and this shows with the Galaxy Note 4 display offering the best experience on any modern smartphone. With 515 pixels per inch density, the Note 4 is super sharp whilst in comparison, the 368 pixels per inch density offered by the Mate 7 is less sharp (albeit still impressive).

The Ascend Mate 7 might be a little larger than the Galaxy Note 4 but this is forgivable when you consider that the Mate 7 has a 0.3 inch bigger display. When Huawei announced the Mate 7 a few days after the Note 4 at IFA back in September, they confirmed that it had a market-leading 83 percent screen-to-body (stb) ratio and in comparison, the Galaxy Note 4 stb ratio is approximately 74 percent.

The Galaxy Note 4 design has been tweaked in response to customer feedback and instead of a full plastic finish, we now have a sleek handset that mixes an aluminium side bezel with a faux-leather plastic rear cover. The Ascend Mate 7 however features the build that almost all Samsung users would like; an all-metal brushed aluminium unibody build which at 7.9 mm thick, is 0.6mm thinner than the Galaxy Note 4.

Both handsets are definitely large and at 153.5 mm tall and 78.6 mm wide, the Galaxy Note 4 is slightly smaller and narrower than the Ascend Mate 7 which measures 157mm and 81mm respectively. Despite the 0.3 inch larger display, the Ascend Mate 7 is almost the same size as the Note 4 and weighing in at 9 grams heavier than the Note 4 at 185 grams, there’s very little noticeable difference between the weight of both handsets. 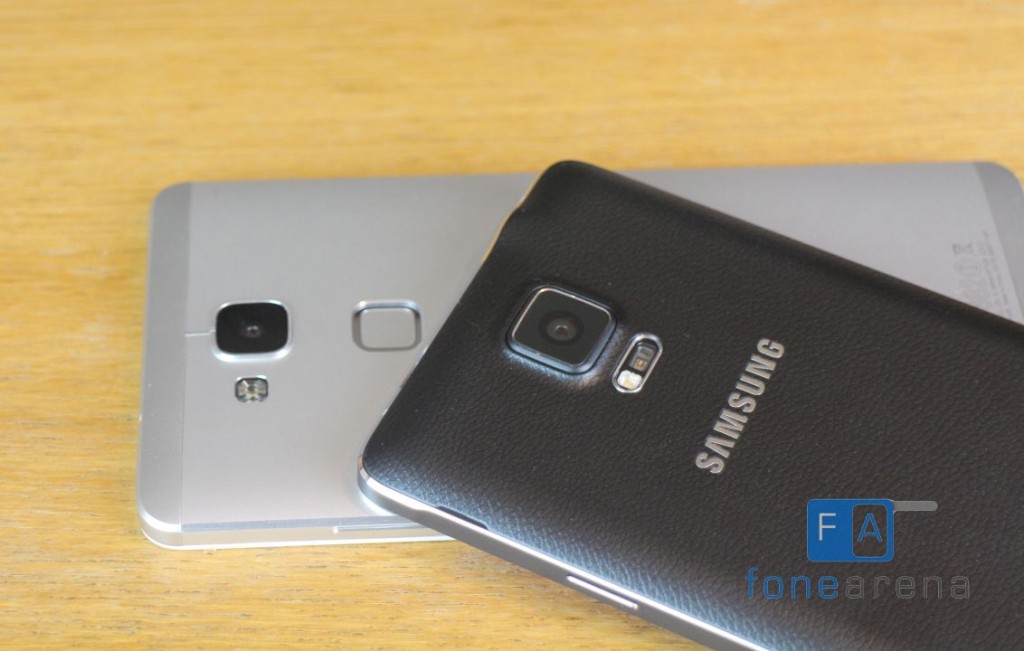 We’ve done some testing on both cameras (more on this in another article) and looking at the two images above (the Mate 7 on the left, Note 4 on the right), it’s clear that the Galaxy Note 4 camera is far superior. Whilst the Mate 7 has a very useful camera, the Note 4 camera is one department that Samsung upgraded from the Note 3 and to devastating effect; the Galaxy Note 4 could arguably have one of the greatest cameras on a mobile device to-date. 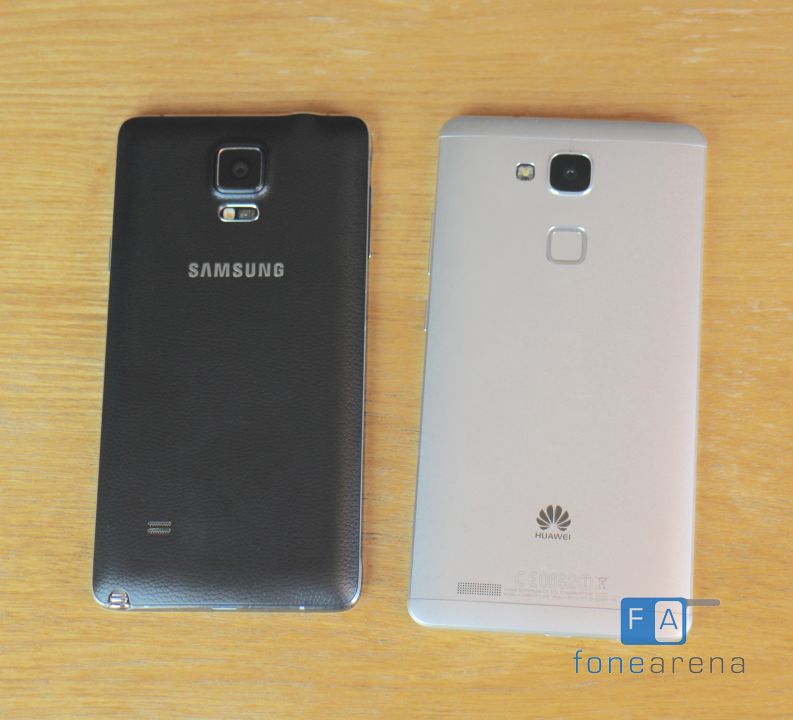 As mentioned previously, the Galaxy Note 4 sports a faux-leather rear cover whilst the Mate 7 has an aluminium unibody design. Thanks to the removable back cover, the 3220 mAh battery in the Note 4 is removable and replaceable but with the Mate 7 not offering access to the battery, you’re ‘stuck’ with the 4100 mAh embedded battery.

On paper, the Ascend Mate 7 should last around 25 percent longer than the Galaxy Note 4 but in real-world usage, we found the gap to be much different. The Galaxy Note 4 battery lasts for one to one and a half days depending on usage whilst – as we discovered in the Mate 7 review – the Ascend Mate 7 easily lasts for two days with heavy usage (and much more with low usage).

The optimisation of the two different interfaces is one key factor here but it’s worth mentioning that the choice to go with a Full HD display instead of a 2k display means that the Mate 7 requires less processing power to push all those pixels. 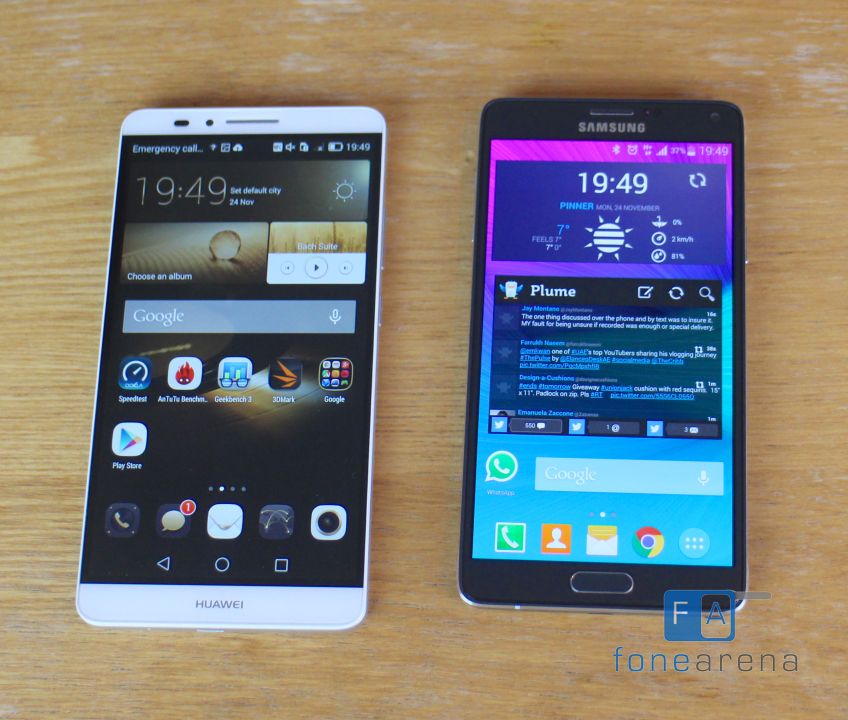 Overall both handsets offer everything you could want in a modern phablet; a large vibrant display, a long-lasting battery life and several features to make the most of the big display. The Galaxy Note 4 may also offer the S-Pen, Multi Window feature and a heart rate monitor but the Ascend Mate 7 offers the necessities with comparative performance at a much-reduced price.

If you’re looking for the best that money can buy, look no further than the Galaxy Note 4 but if you’re after an impressive phablet experience without the hefty price tag, the Ascend Mate 7 is well worth the price tag it commands.