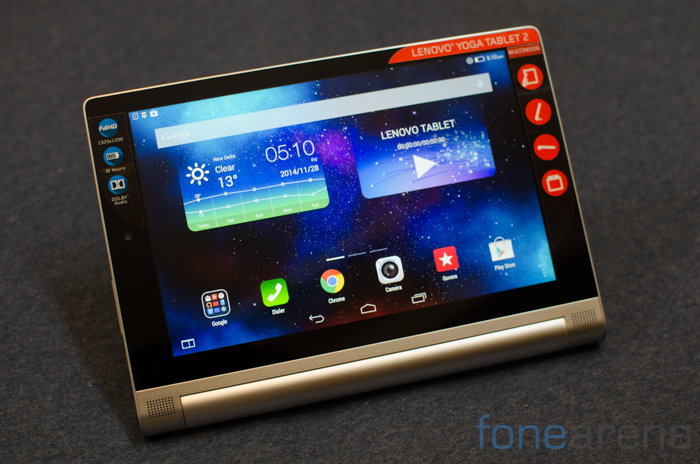 Android tablets in the 7-8 inch space are a dime and a dozen. In fact the small tablet category is practically being dominated by these Android running machines and the fact is that we are approaching a level of homogeneity in terms of specifications too. With that in mind, it is becoming increasingly hard for an OEM to differentiate its product from the deluge of competitors out there. Enter the Lenovo Yoga Tablet 2. With a very unique take on design, quality hardware and a polished build of Android on board, it has the potential to be the tablet of choice for many users but is it perfect? We take an in-depth look in our review.

Lifting the tablet out of the box, the first thing you’ll notice is the cylindrical tube on one end of the tablet. The cylinder packs the battery as well as the kickstand mechanism. While the rest of the fascia has a black bezel, this kickstand enabled end gives the impression that the tablet is predominantly meant to be used in the landscape orientation. We’ll be talking more about general usability further down the review. 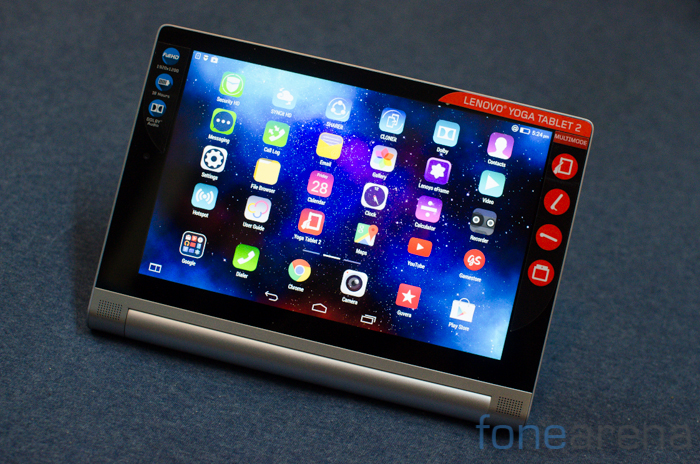 On the face of it, the Lenovo Yoga Tablet 2 is a handsome looking device. The 8 inch display is flanked by black bezels on all sides with a front facing camera at the top. Depending on the orientation you hold it in, the cylindrical battery lies along the long edge of the tablet. Dual speakers are placed at both ends.

Owing to the very unique construction, the tablet is surprisingly slim for the most part with a gentle taper towards the cylindrical edge. You’ll find the microUSB port and the volume rocker at the top edge while the power button is embedded on the same side within the hinge. We found the recessed volume rocker to be a bit hard to press though we suspect this will get better with time and extended usage. The headphone jack lies within the opposite hinge. 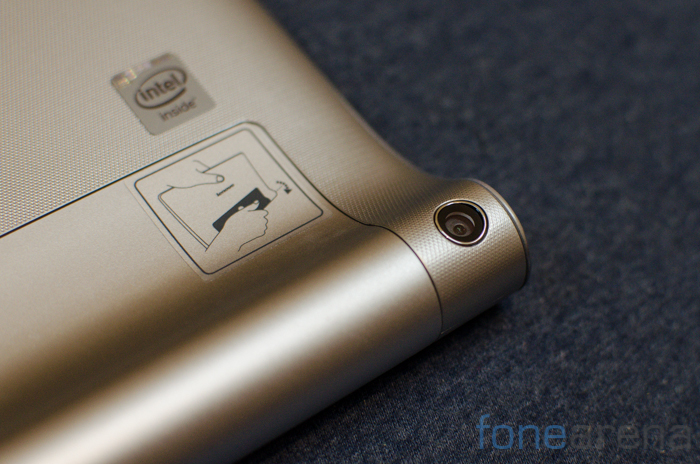 Moving over to the back, you can spot a mesh like pattern in the magnesium alloy chassis of the tablet. Not only does it look great, it also prevents the tablet from slipping out of your hands by making it sufficiently grippy. A Lenovo logo can be seen embedded here at the back. The only gripe we have is with the placement of the camera module in the hinge. The most obvious position to hold the tablet while shooting photos would be in landscape mode with the cylindrical hinge resting around your palm. Unfortunately the camera gets covered by the palm making it impossible to capture a shot. The only way around this is to grip the tablet by the edge and keep the hinge up in the air.

Having covered the obvious aspects of the build, let’s get to the most unique aspect of the Lenovo Yoga Tablet 2 i.e. the cylindrical hinge that also incorporates a very cool kickstand. The three way kickstand facilitates exactly three different operations. The first step allows you to place the tablet at an angle that will let you touch type easily. It’ll take a bit of getting used but it is certainly possible to type out long-form text in this mode. The second mode essentially acts as a regular kickstand wherein the tablet stands at an angle and lets you view movies, photos, etc comfortably. The third mode is where things get particularly intriguing. The kickstand has an eyelet in the middle and Lenovo expects you to hang the tablet from a nail. Why would you do that? We can certainly think of several use cases. Perhaps as a means to view recipes while in the kitchen or as a photo frame, the possibilities are endless. We like how Lenovo is thinking out of the box and bringing a solution that not just adds functions but also facilitates improved battery life through its design. 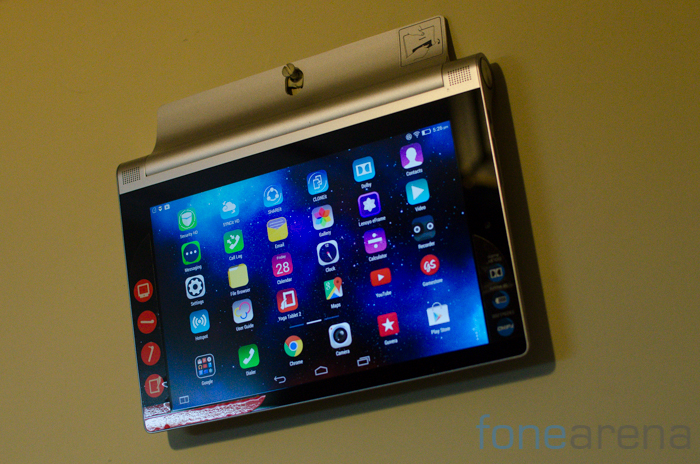 The Lenovo Yoga Tablet 2 clocks in at 419 grams and measures 210 x 149 x 7 mm making it just a bit larger than other 8 inch tablets. While it is certainly on the heavier side, we feel that the added battery life and flexibility offered by the kickstand make up for it. The tablet feels rock solid and you definitely won’t find anything lacking in the construction. the tablet is ergonomically sound for the most part, holding it in portrait mode was fairly comfortable for us in the right hand with the left being used for touch typing. Overall, the Lenovo Yoga Tablet 2 gets full points for design and construction.

The Yoga Tablet 2 runs Android 4.2.2 with a custom interface layer on top of it. There’s also a whole range of pre bundled applications built into the tablet. Being useful for the most part, we couldn’t really complain about the app bundle. That said, it is possible to delete most of these so it shouldn’t really be a problem even if you do want to get rid of the applications. 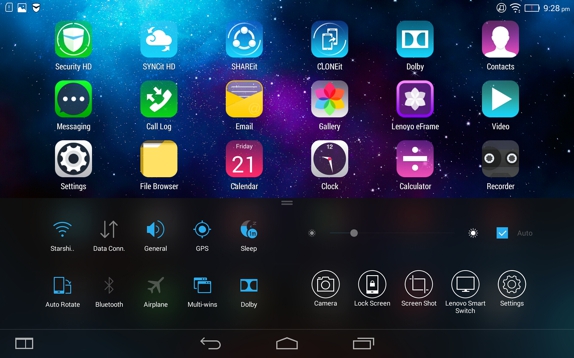 Coming to the interface itself, it adopts an iOS like hierarchy wherein the applications are placed straight up on the home screen and share space with widgets. You can pull down the notification shade as expected and swiping up from the bottom of the screen will bring up the quick access shortcuts. 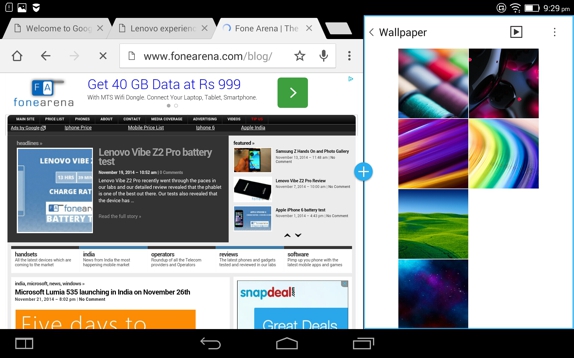 The tablet also has its own take on multi-window usage similar to what is seen on Samsung devices. You can add a range of applications here and the tablet will also let chose how you want to divide the screen between multiple apps. While this won’t work with every app on your tablet, it works very well within the whitelist. 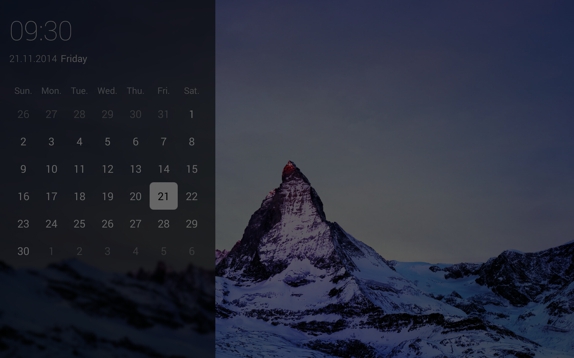 We’ve got polarizing thoughts about the software onboard the Lenovo Yoga Tablet 2. While the software is clean to look at and even adds some nifty functionality to the tablet, we feel that it also detracts from the performance to an extent. The tablet experienced occasional stutters and lags that we can attribute to the slightly bloated ROM on the device. Some more optimization or perhaps a stock ROM would definitely help the tablet fly.

Under the hood of the Lenovo Yoga Tablet 2, you’ll find a quad core Intel Atom Z3745 processor clocked at 1.8Ghz. This is paired with 2GB of RAM. The specifications are satisfactory enough to plough through pretty much anything you might throw at it. Where we did find the tablet lacking was in software optimization. It was not uncommon to spot lags and stutters in page transitions and in opening system applications. That said, we feel that this is something that will improve with ongoing software updates. Additionally, the issues practically disappear the moment you slap on an alternate launcher which we’ll highly recommend installing anyway. We put the tablet through our regular benchmark suite to give you a better idea of comparative performance across the board. Follow through to see how the tablet is placed amongst its peers. 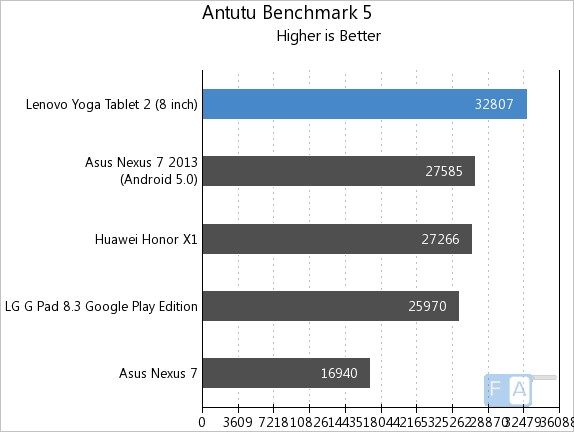 In the AnTuTu Benchmark, the tablet scores 32807 points which places it well above the competition. While the difference is not substantial, it is quite apparent in day to day usage. The benchmark app runs a complete set of tests including memory performance, CPU integer performance, floating point performance amongst others. 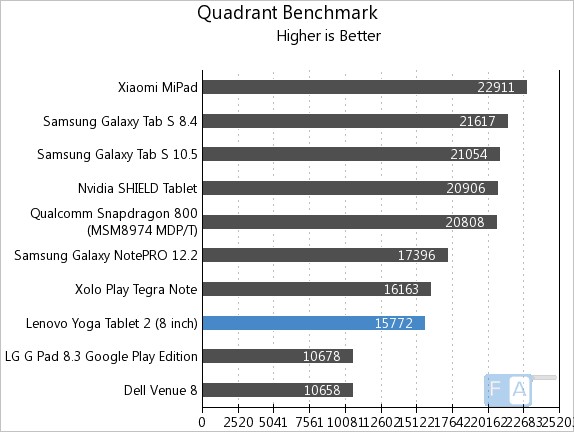 In comparison, the tablet did not do too well in the Quadrant benchmark. Like AnTuTu, Quadrant too is a full range comprehensive test bench that gives us a comparative score to gauge how well our device performs.With a score of 15772 points, the Lenovo Yoga Tablet 2 is placed significantly low in the hierarchy. All said and done, benchmark scores are hardly the deciding factor when it comes to performance of a device. The tablet performs well no matter what task you throw at it. Software optimization related UI lags are the only niggles we found with the device.

Packed with an 8 inch full HD IPS panel, the Lenovo Yoga Tablet 2 has a gorgeous display. The brightness levels too never left anything to worry about. We had absolutely no concerns with brightness levels and general visibility even outdoors. Smudges however are a major concern. The tablet picks up smudges way too easily on the display and this can hinder outdoor visibility on occasion. 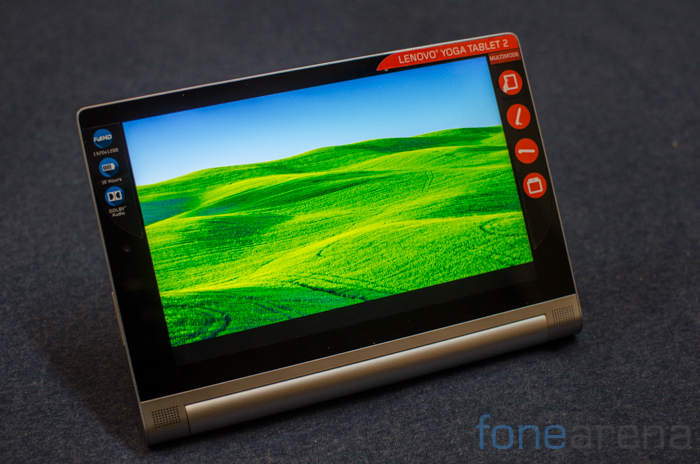 Other than that, the Lenovo Yoga Tablet 2 packs a beautiful screen that does a great job of showcasing high definition videos and photos. Viewing angles too are top notch.

The Lenovo Yoga Tablet 2 is equipped with an 8MP rear facing shooter while a 1.6MP camera is placed up front. The image quality from both the cameras is just about alright and we wouldn’t really recommend depending on the Yoga Tablet 2 for any serious shooting.

In addition to the poor image quality from the cameras, the rear camera is placed in a very awkward position wherein you are very likely to place a finger over the sensor. In fact it is quite a task to frame a shot without placing a hand or palm over the camera unit. Bit of a poor design decision by Lenovo then. We’ve included a couple of shots from the camera below so that you can get a better idea of what to expect. 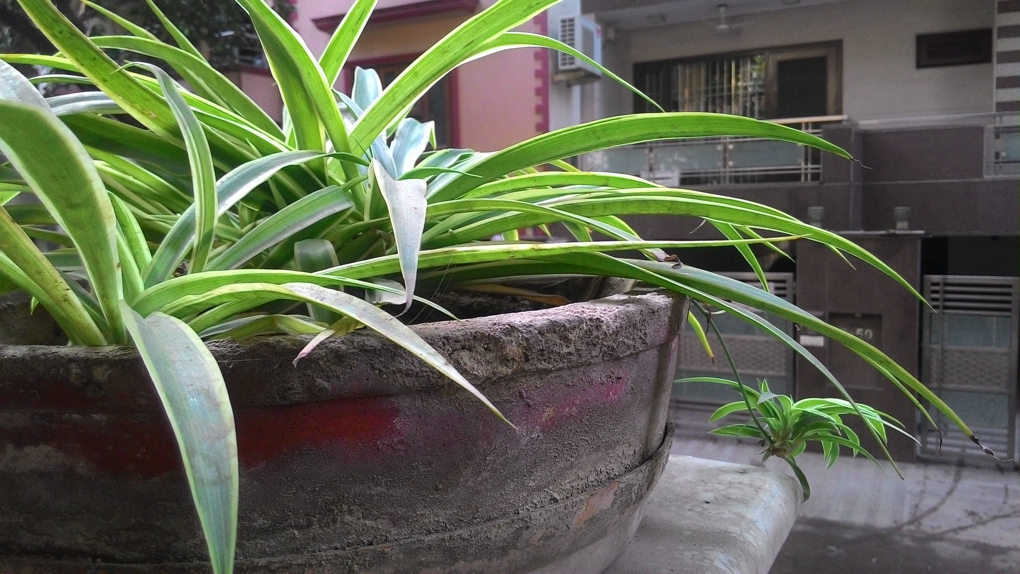 The camera does well enough in bright outdoor conditions though there is always a hint of noise and over sharpening in the final results. 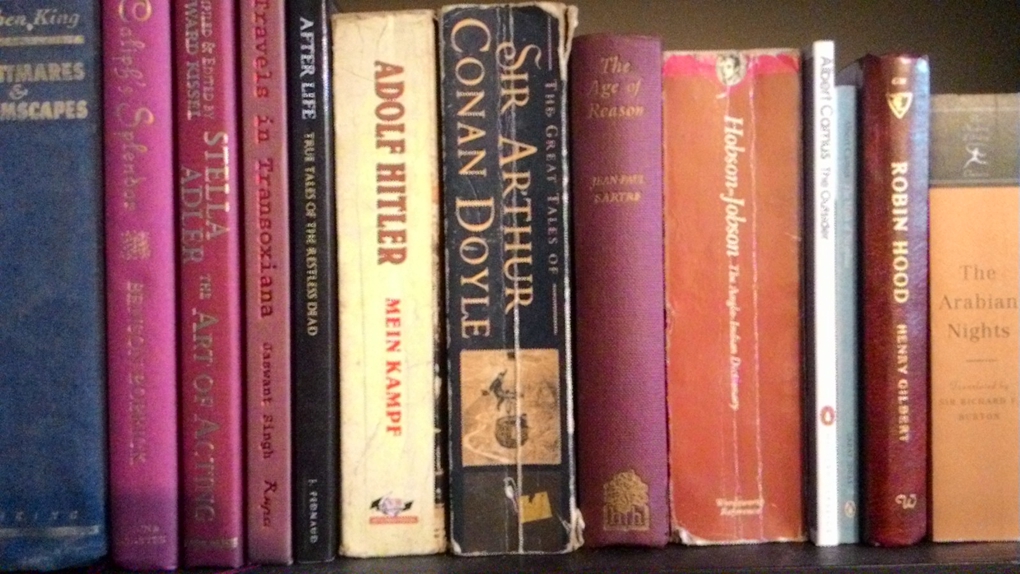 In less than ideal conditions though, the camera struggles with getting a focus lock and images appear blurry more often than not.

The Lenovo Yoga Tablet 2 is equipped with a whopping 6400 mAh battery pack. The battery has been placed in the cylindrical hinge under the kickstand. The large battery and excellent optimization by Lenovo means that you are guaranteed fantastic autonomy on the Yoga Tablet 2. It isn’t hard to get 2 days of fairly active usage out of it. Even under relatively stressful conditions, we were able to get over 10 hours of constant video playback with all radios on. You certainly won’t be disappointed by battery life on the Yoga Tablet 2. What we did find a bit of a hassle was battery reporting. Once again a result of half baked software, the tablet will occasionally report battery to be around the 1% mark despite being fully charged. While the tablet never switched off and did in fact deliver excellent battery life, the poor reporting can be a cause for concern and confusion. 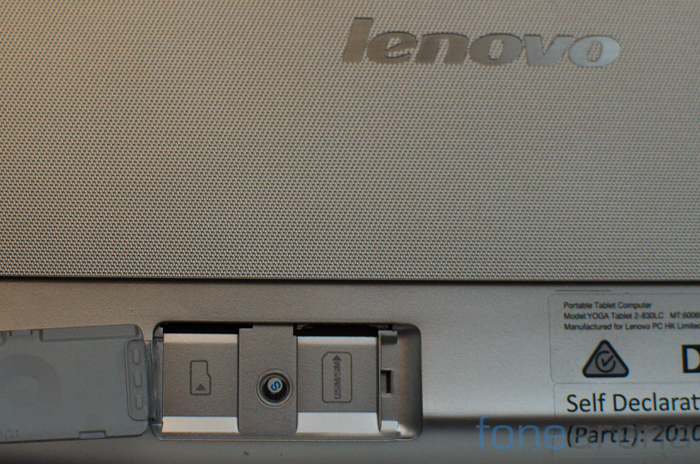 The Lenovo Yoga Tablet 2 gets a lot of things right. The interesting hardware design isn’t just a gimmick. It definitely adds a new dimension to usability and allows for interesting use cases. We certainly grew to like hanging the tablet off a wall to use while in the kitchen. Add to that excellent battery life and general build quality and there’s a lot to like here.

The software however is something that definitely needs to be worked on. Optimization is lacking and results in stutters and lags in general operation. The skin while functional, doesn’t do any favors to the aesthetics. A stock or near stock build of Android would’ve certainly helped in this respect. We do like the Lenovo Yoga Tablet 2 especially at a price point of Rs. 20,990. It can be a bit hard to recommend given its current software build but we’re confident that the software issues will get ironed out. The Yoga Tablet 2 certainly has the potential to be in the running for our favorite Android running tablet.