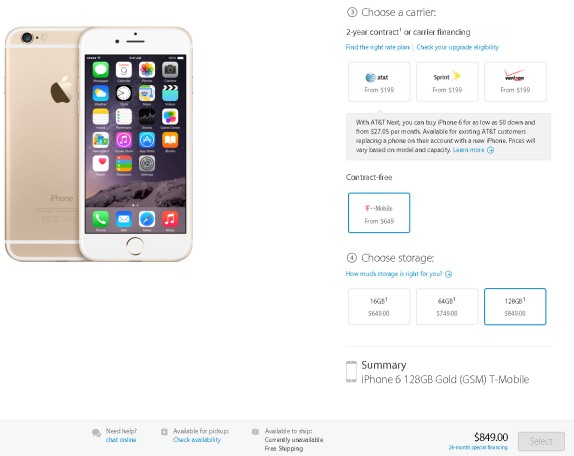 Apple just announced the iPhone 6 and iPhone 6 Plus at an event and we have some interesting information regarding the prices of the iPhone 6 in case you are looking to buy them in the US. While the contract prices start at $199 for the 16GB model , $299 for 64GB version and $399 for the 128GB version, there is a mention of a Contract-free T-Mobile version of the devices as well. We are not sure if these devices are still locked to the operator or unlocked. Still this information gives us a fair idea about how the unlocked versions might be priced. The Contract-free prices start from $649 for the 16GB base version of the iPhone 6.

The 64GB version of the iPhone 6 will cost $749 and the top 128GB version will cost $849. You can see that there is no 32GB version this time. We are hearing that the India launch is also pretty soon. Bear in mind that these prices don’t include taxes so your final bill might be close to 10% more. The iPhone 6 still uses a nanoSIM card like the iPhone 5S and 5c. One good thing about the iPhone 6 is that there might be support for more LTE bands and also a possibility of global LTE roaming.