Sony is planning to debut two wearable devices at the IFA 2014 along with other smartphones and tablets. According to a report from 9to5Google, Sony will launch Android Wear powered SmartWatch3 and SmartBand Talk at an event this week. 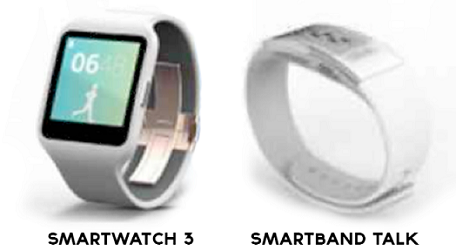 SmartWatch 3 which is the successor of SmartWatch and SmartWatch 2, will run Android Wear and sport a 1.68-inch 320 x 320 display. It will be IP58 certified dust and water resistant, says the report. Earlier reports had suggested that Sony’s next smartwatch will run on comapny’s own SmartWatch OS and not Android Wear. No other details about the watch are known as of yet.

Moving on, the second wearable expected to be announced is the SmartBand Talk which is the successor to the SmartBand SWR10. The health monitoring fitness tracker device will likely feature a curved E Ink display and support Bluetooth connectivity. The report has released photos of the wearables under the label “Renderings of Sony’s new SmartWatch 3 and SmartBand Talk’. However, there is no official word from Sony regarding the same.

Sony is also expected to announce a complete line of Xperia Z3 products including the Xperia Z3, Xperia Z3 Compact and Xperia Z3 Tablet Compact at the event.