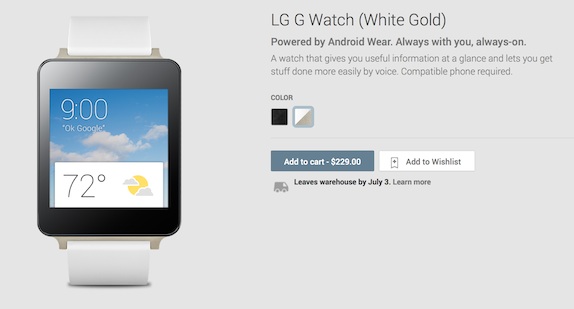 Google announced that it was going to start selling the LG G Watch in the US starting from today during the Google I/O 2014 keynote where the company announced its big ambitions for Android Wear.The devices are currently up for order on the Google Play store in the US. The LG G Watch is not something which is totally new and was announced few weeks back when Google announced the Android Wear platform.The G Watch features a 1.65 inch 280×280 pixel display and is 9.95 mm thick.It has a 400 mAh battery is powered by a 1.2 GHz processor on the inside. It has 4GB of storage and 512 MB of RAM. It connects to your Android phone using Bluetooth 4 LE and is water and dust resistant.The main idea behind Android Wear is bringing notifications which you generally see on your Android phone over to your wrist. Since the device has a touchscreen, you can swipe through the various cards and is very similar to how Google Now works on your phone.

The G Watch will be available in 2 colors – Black Titan and White Gold and are aimed at men and women probably. The watch will start shipping on July 3rd and the price at $229 before taxes and shipping (Rs.14000 approx). The watch is compatible with any Android phone running Android 4.3 and up and not restricted to LG phones. The package comes with a Charging cradle,Travel adapter and USB cable.