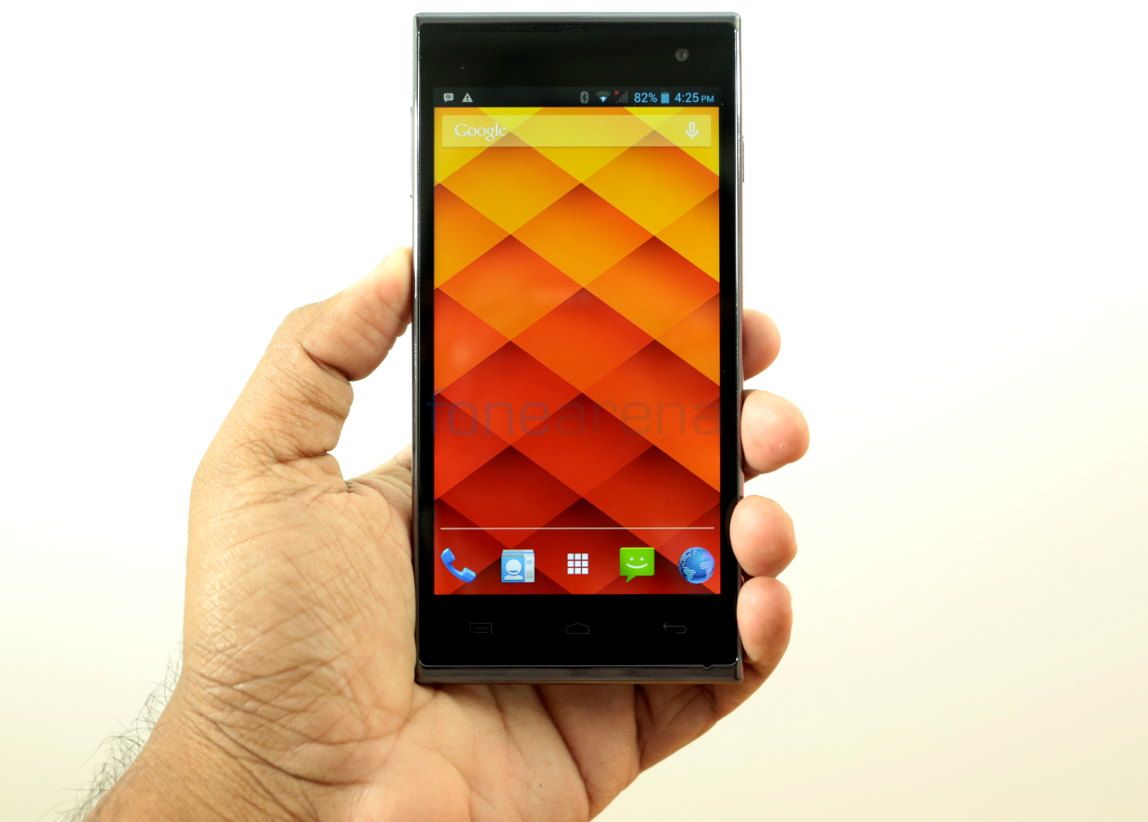 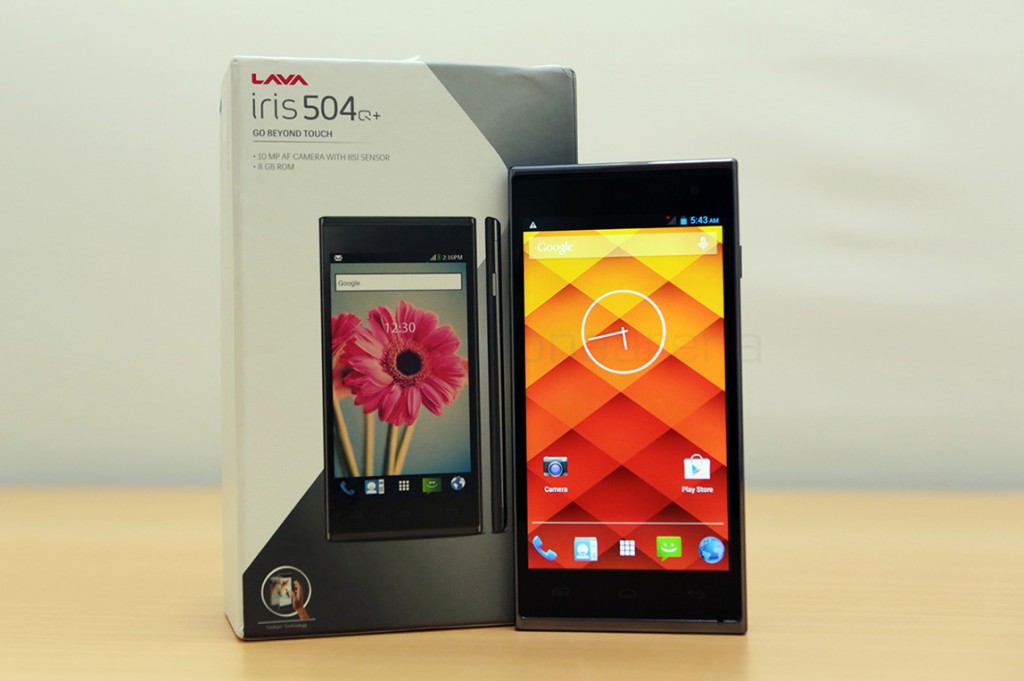 We unboxed the Iris 504Q+ recently. Check out the unboxing video 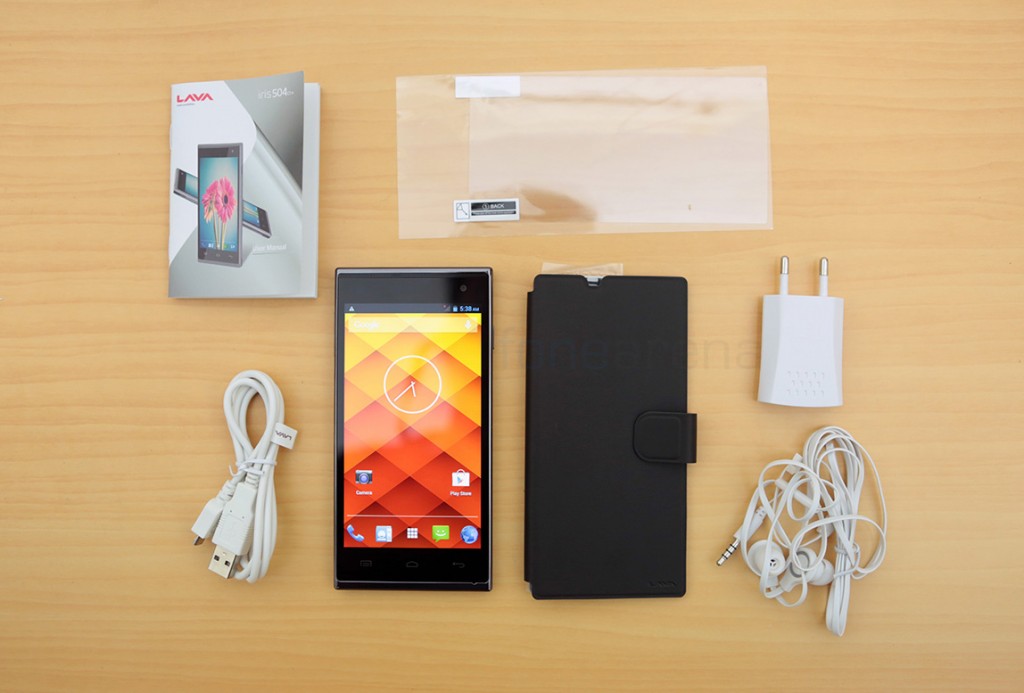 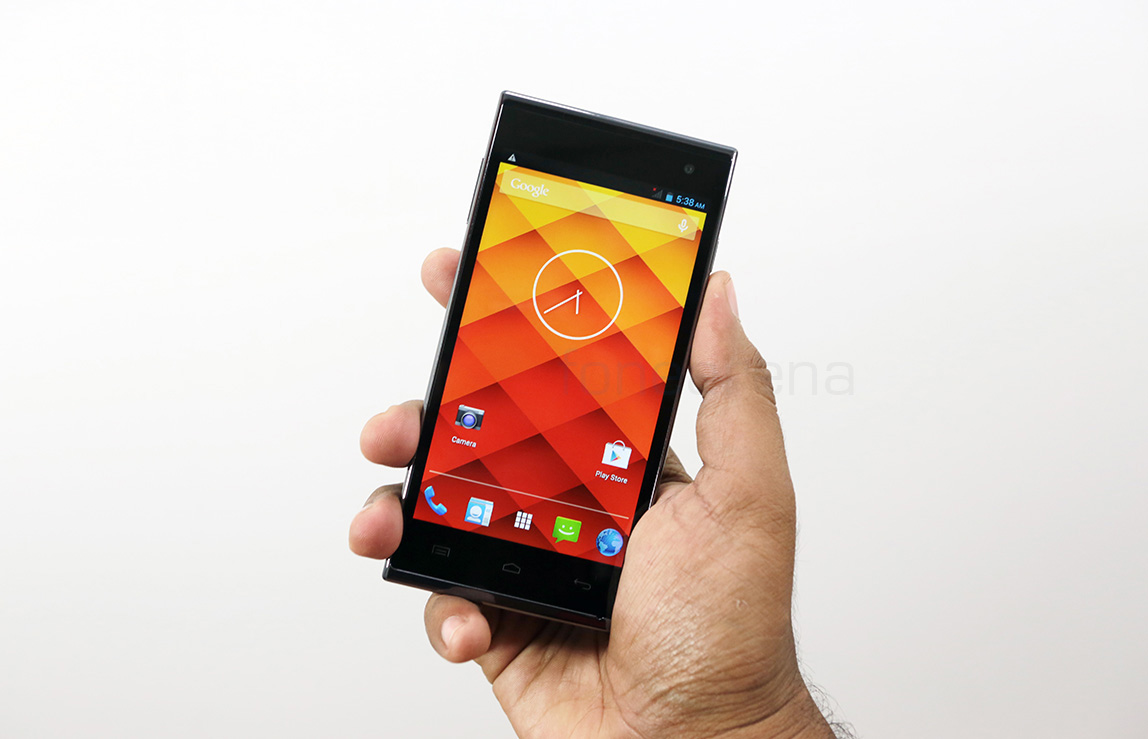 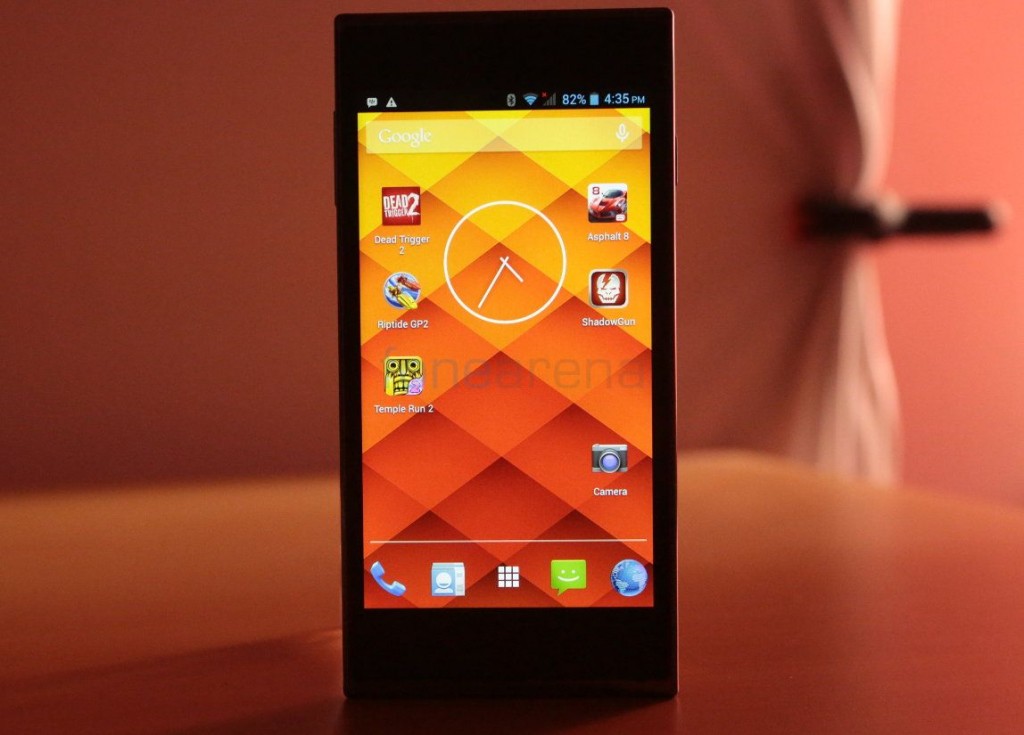 It has a 5-inch (1280 x 720 pixels) IPS display at around 294 ppi pixel density. The display is based on one-glass-solution (OGS), so it’s sharp with vibrant color reproduction. It is bright, has perfect viewing angles and the sunlight legibility is also quite good. This display is also protected by Asahi dragon-trail glass, an alternative to Corning’s Gorilla Glass. Since the display is glossy, it is prone to fingerprints. You can use the bundled scratch guard to protect the screen further. Overall the display is pretty good. 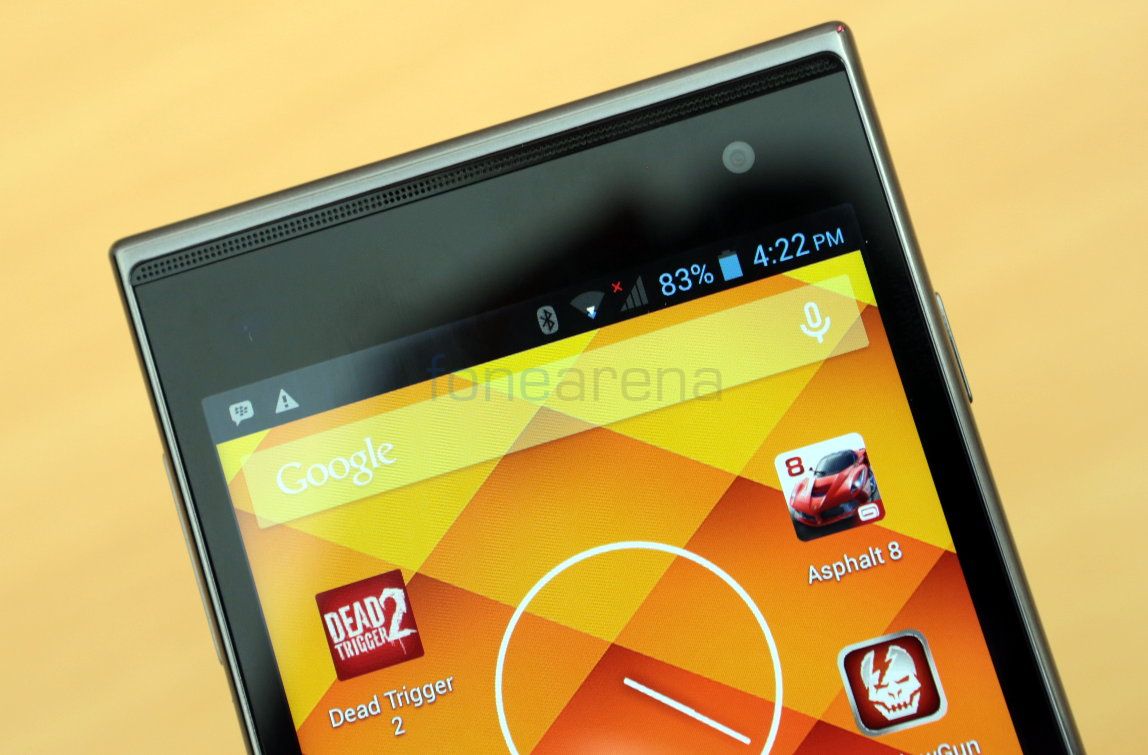 It has a 2-megapixel fixed focus camera on the top that can record videos at 480p (VGA) resolution. The usual set of proximity and ambient light sensors and present on the left side. These are hardly visible due to black bezel. On the top there is a tiny grill, but the primary microphone is present somewhere near the left corner. 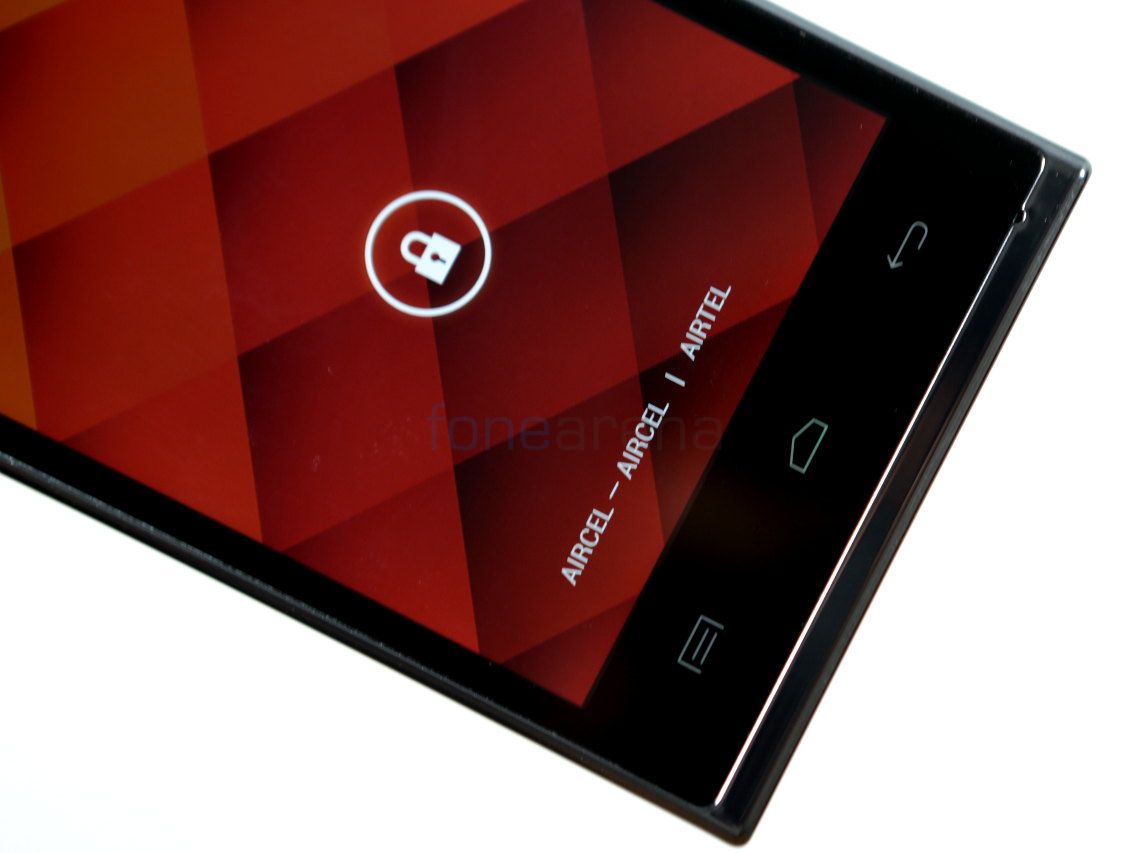 There are the usual set of capacitive touch buttons for menu, home and back, below the display. These are backlit and offer haptic feedback when pressed. The home button has a built-in notification light that glows in Green when there is a notification and glows in Red when the phone is charging. The implementation of the notification light is good. Wish it was brighter, since it is not clearly visible in bright environment. 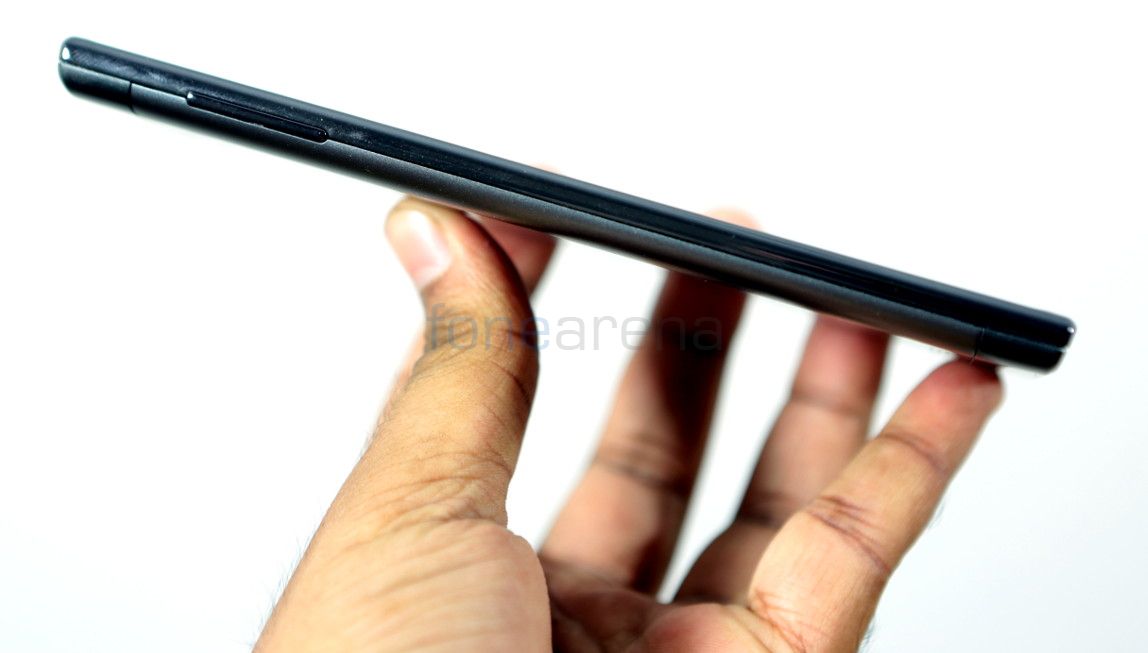 The volume rocker is present on the left side. The phone is just 7.9mm thick. Since it has shiny chrome rim running on the sides, it attracts fingerprints easily. 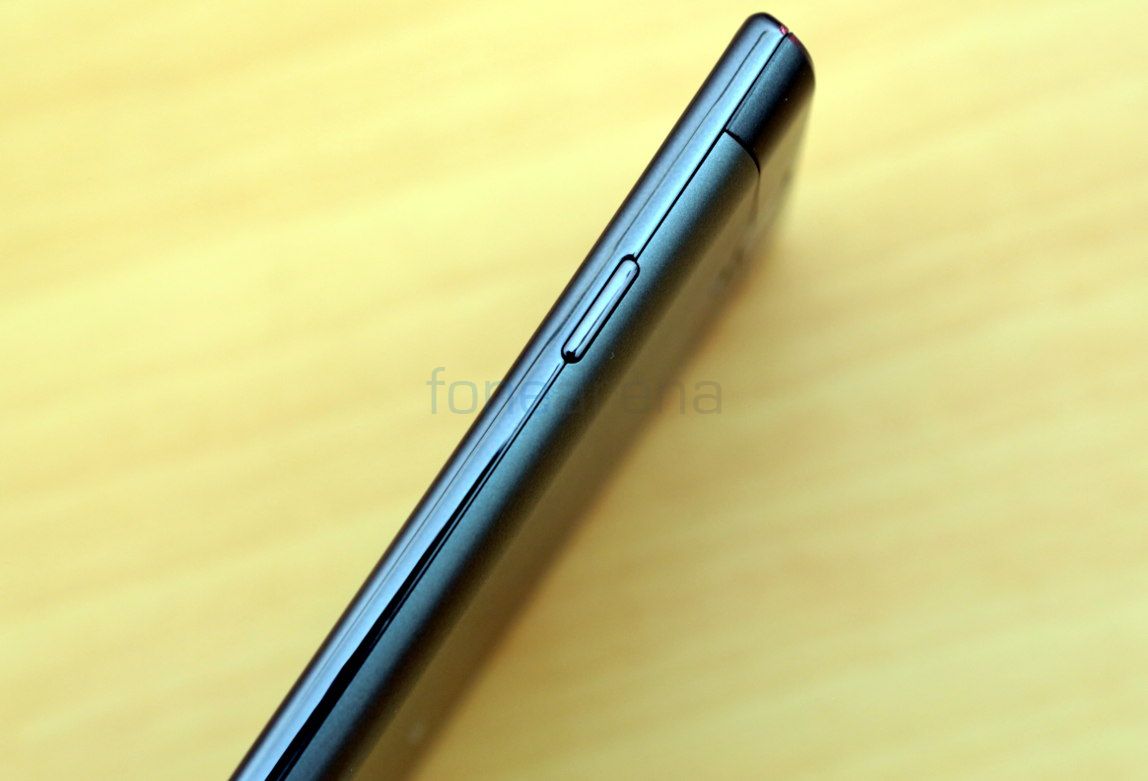 The power buttons is present on the right side. You can see the chrome rim that extends from the front part. Both the volume rocker and the power button have shiny chrome finish that are prone to fingerprints.

The micro USB slot is present in the bottom. Both the top and bottom have a smooth plastic finish that is not shiny. 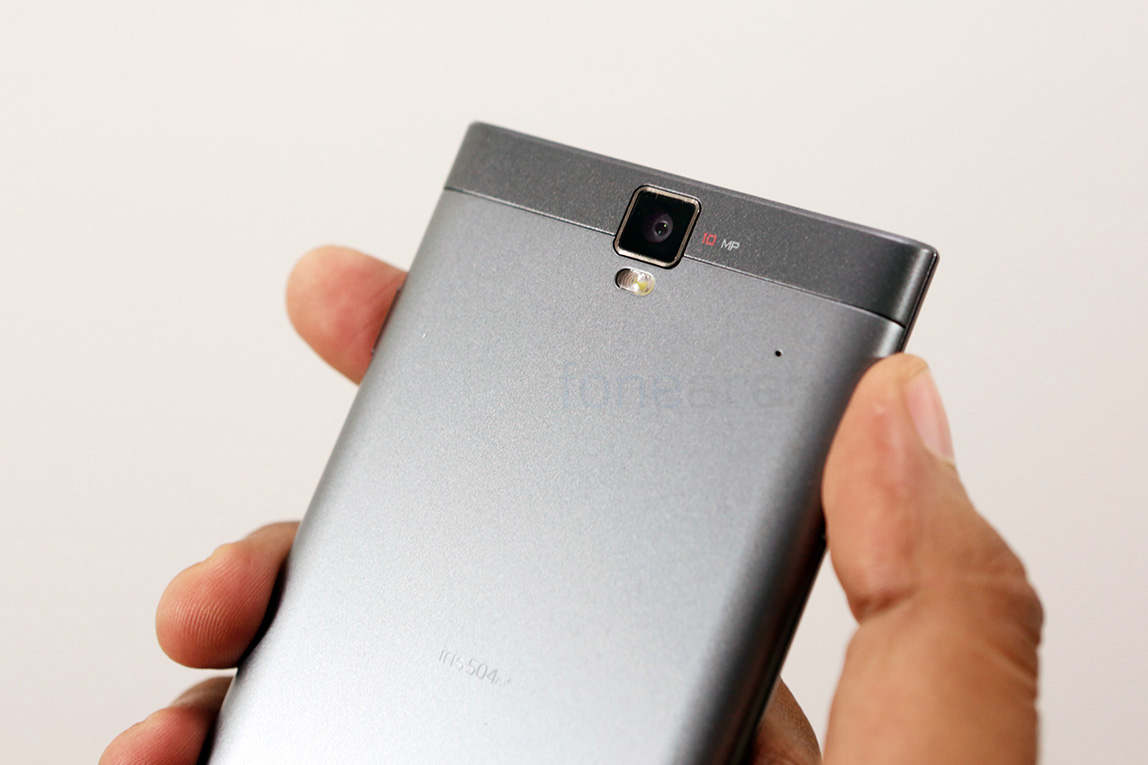 On the back there is a 10-megapixel camera with LED flash. You can also see a tiny microphone hole just below the camera module. 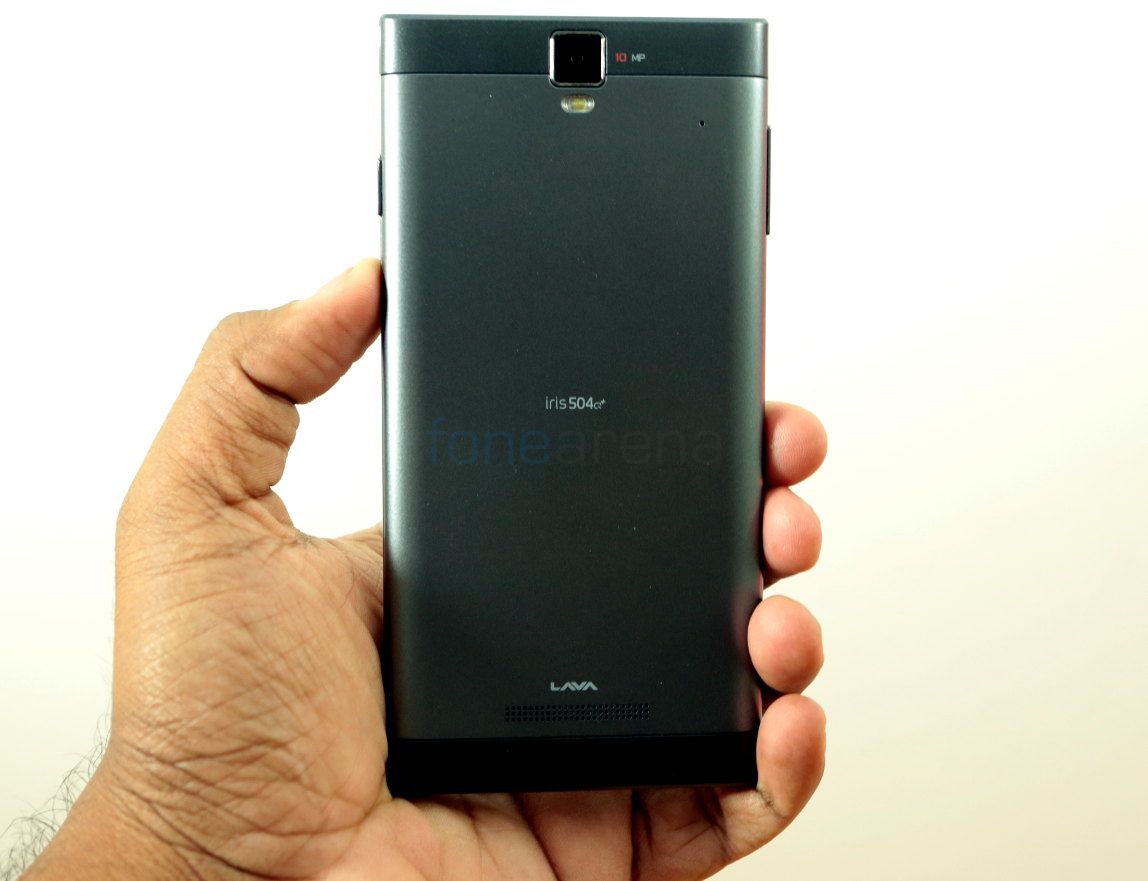 On the back, the phone has two-tone finish. It has a dark grey strip on the top and the bottom. It has light grey finish in the centre. The phone is easy to grip and doesn’t slip out of your hands and has solid build quality. 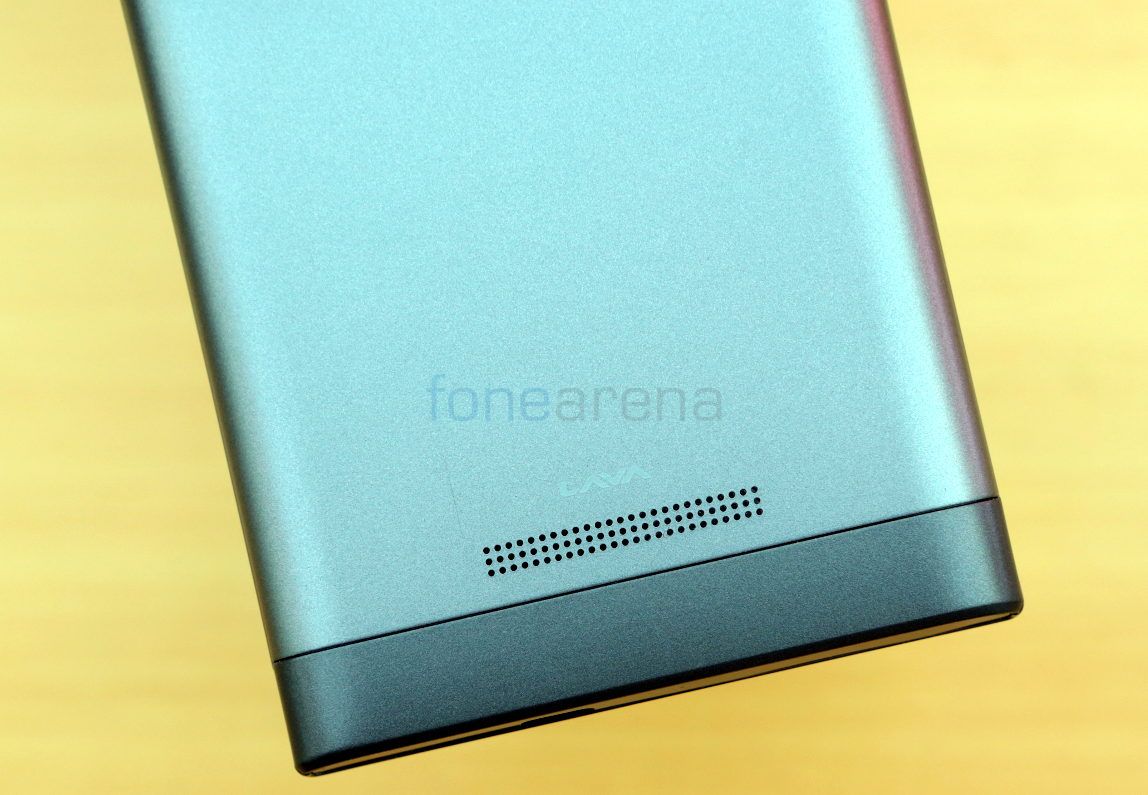 There is a large loudspeaker grill on the bottom part of the back. 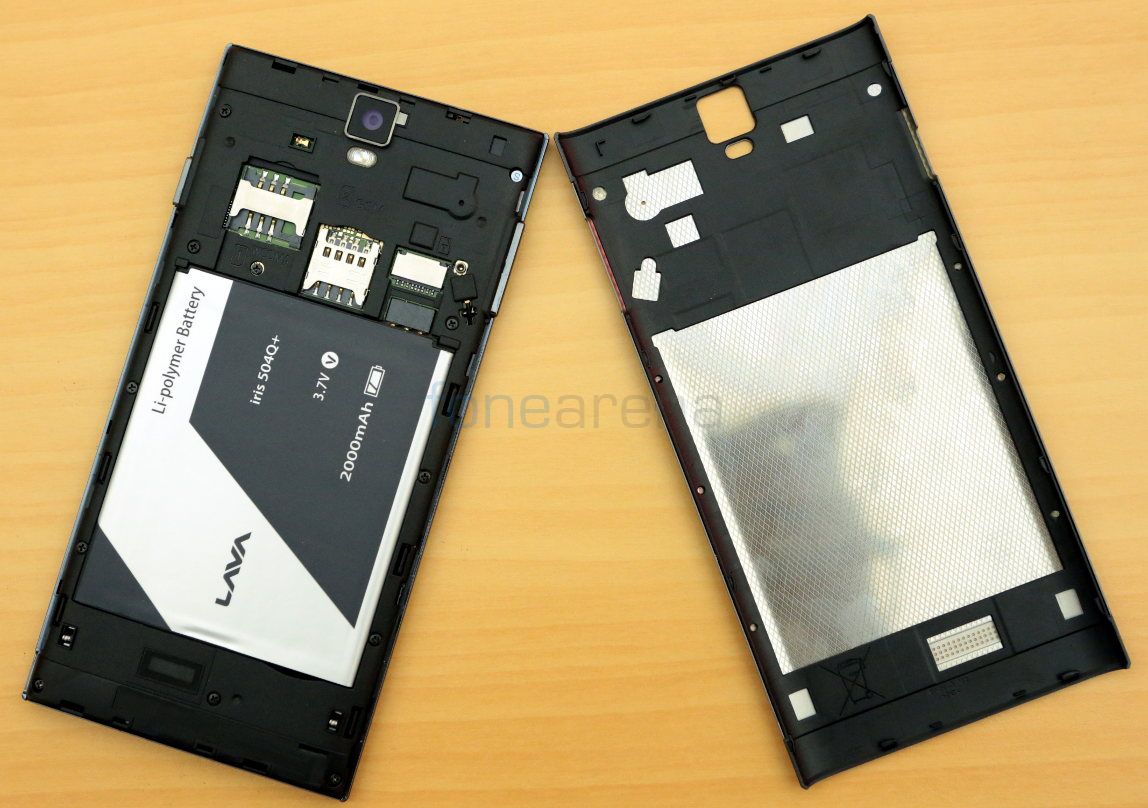 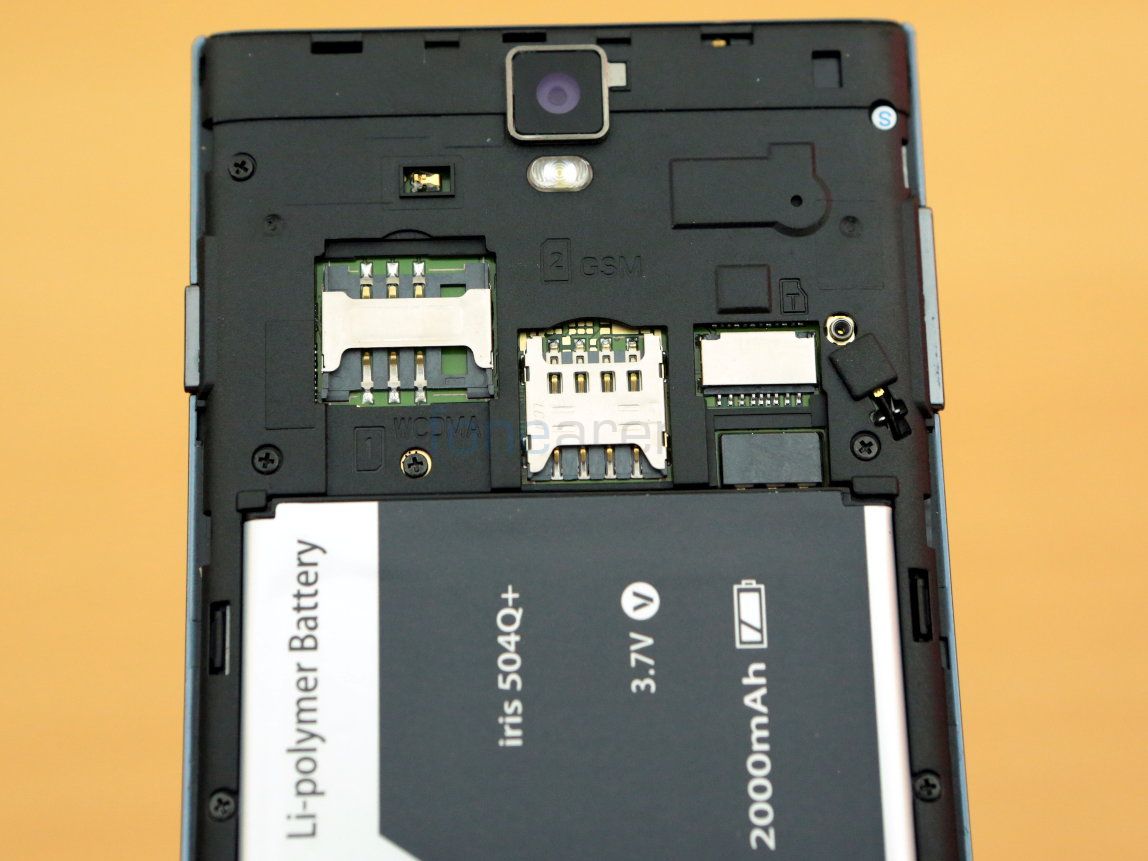 It comes with dual SIM support with dual standby with a primary mini SIM slot and a secondary micro SIM slot. It also has a microSD card slot. 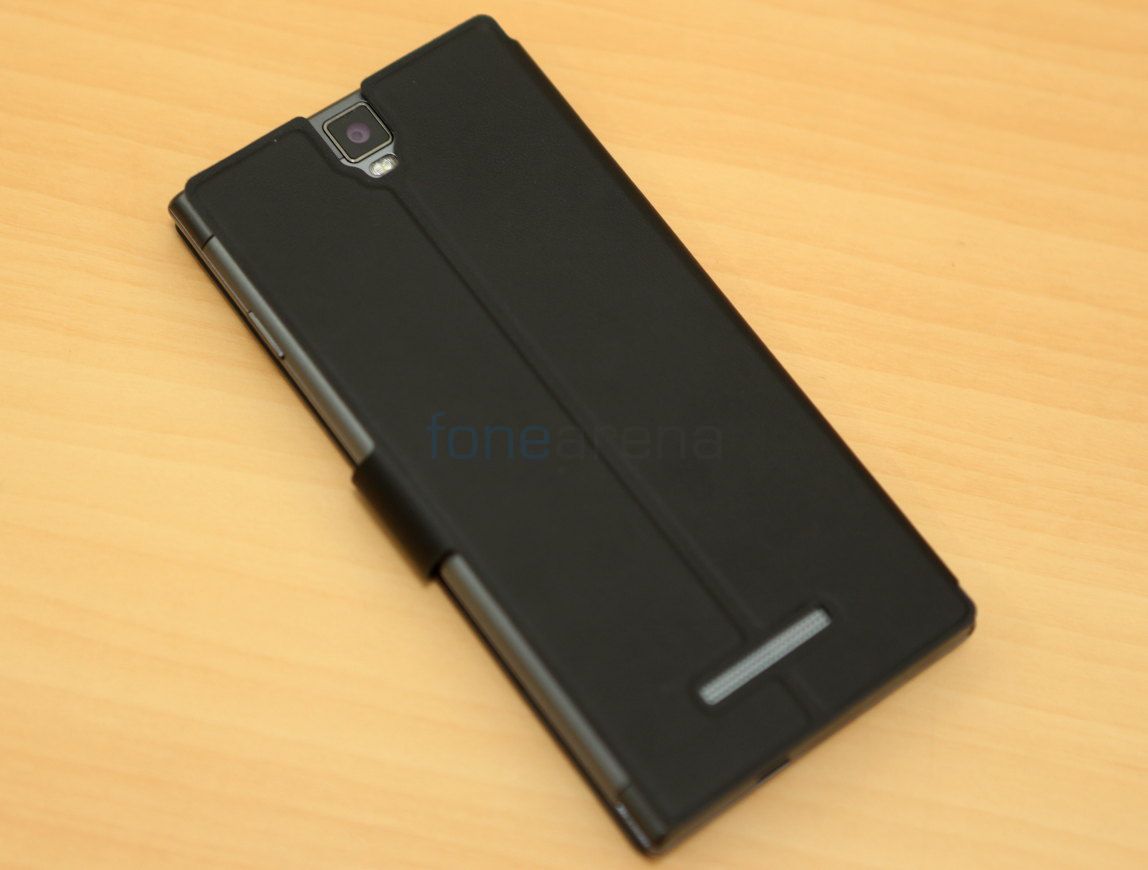 The phone also comes with a free flip cover in the box. This comes with a sticky strip that needs to be attached to the cover so that it could be attached to the back of the phone. The cover has a smooth matte finish. The flip cover has a magnetic flap to seal the cover perfectly. The phone uses proximity sensor to detect when the cover is closed and automatically turns the display OFF. 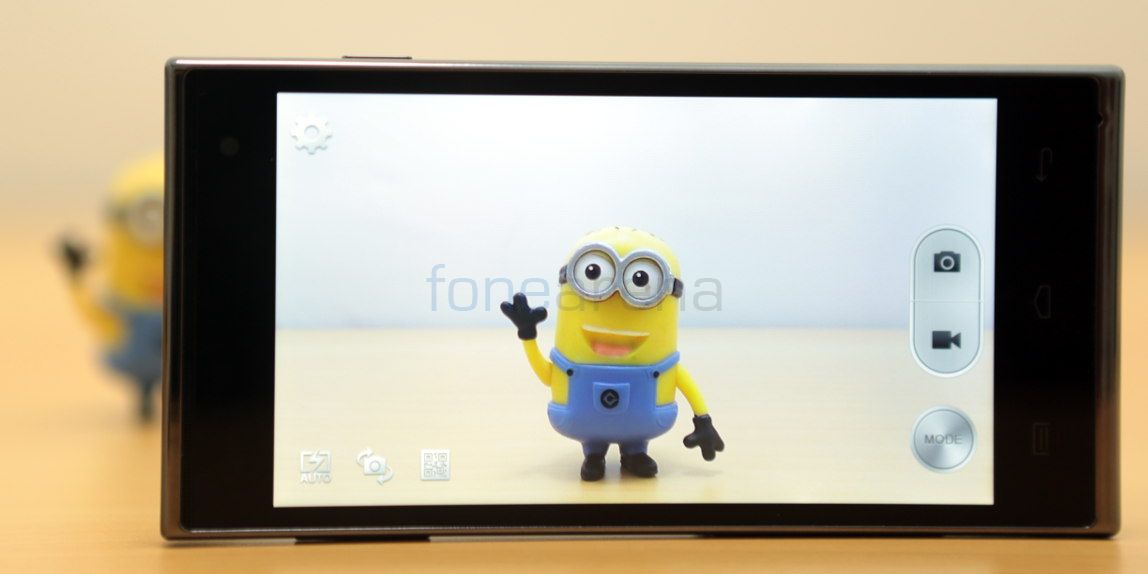 Coming to the camera, the most highlighted feature in the phone. It has a new camera UI, unlike the usual MediaTek-powered phones. On the right there is a camera shutter, video button and a mode button to switch to different scene modes. On the bottom left there is flash toggle, option to switch to either front or rear cameras and a new QR code feature. The QR code option opens up a separate app that lets you read QR codes. On the top left corner there are options for face beauty, white balance, timer, ISO and more. You can check out the screenshots of the camera UI below.

In the settings there are the usual camera and video options that you see on other MediaTek-powered phones. It also has option to capture images with voice commands (cheese or capture) and by waving your hand over the phone using Air shuffle.

Coming to the camera performance, the 10-megapixel camera with Sony Exmor RS BSI sensor with pixel size of 1.4 µm is just average. Daylight images are good, but it had a lot of noise so the details are lost. Low-light shots are full of noise and the flash is too bright that washes out the image. Macro and HDR shots came out pretty good. Check out some camera samples (click to view the full resolution image) below. 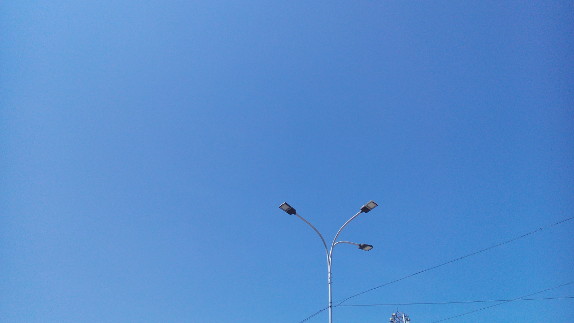 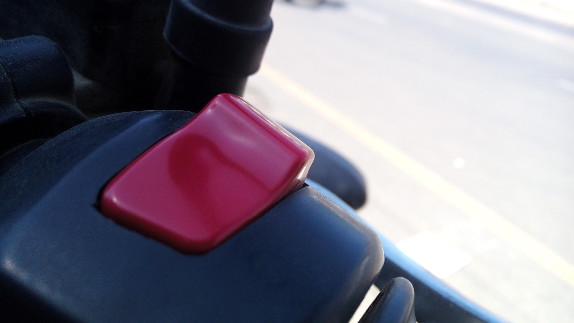 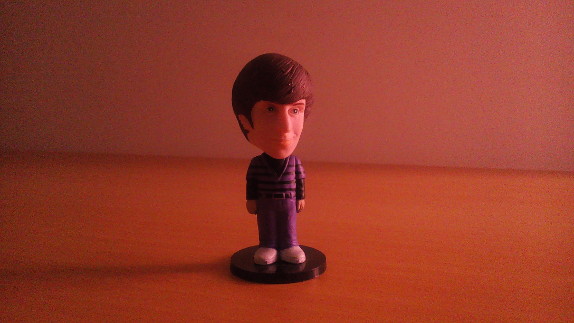 You can check out the complete set of Lava Iris 504Q+ camera samples here.

The phone can record videos at 1080p full HD resolution at 30fps. The video quality is above average, compared to the images, but the audio is not crisp even with the secondary microphone. Check out the video sample below. 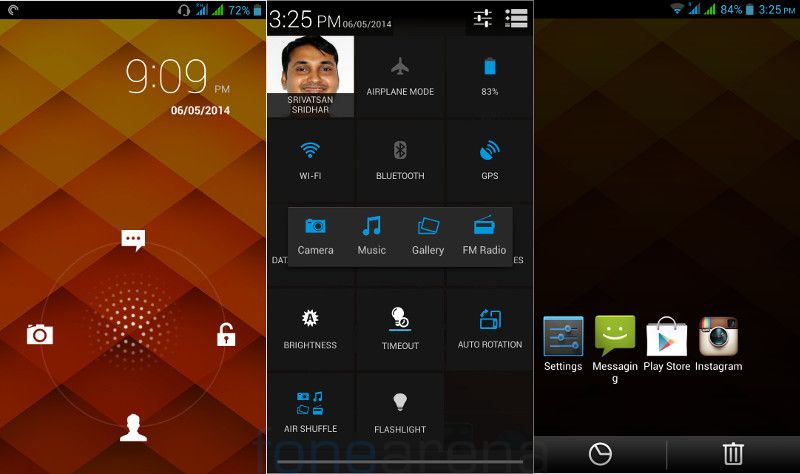 Coming to the software, the phone runs on Android 4.2.2 (Jelly Bean), similar to most other Lava Iris series smartphones. Even though the base software is almost stock, the phone has a slightly different UI. It has lock screen shortcuts to directly go to messages, camera and contacts. It also has Air shuffle similar to its predecessor. This lets you capture images, change songs or FM stations and view images using simple gestures. You can also swipe through the apps menu using gestures. This uses the phone’s proximity sensor to detect your gestures.

It also has a new multitasking menu that lets you swipe apps vertically to clear them, instead of horizontal swipe on other devices. It also has option to clear all the apps and a shortcut to currently running apps. 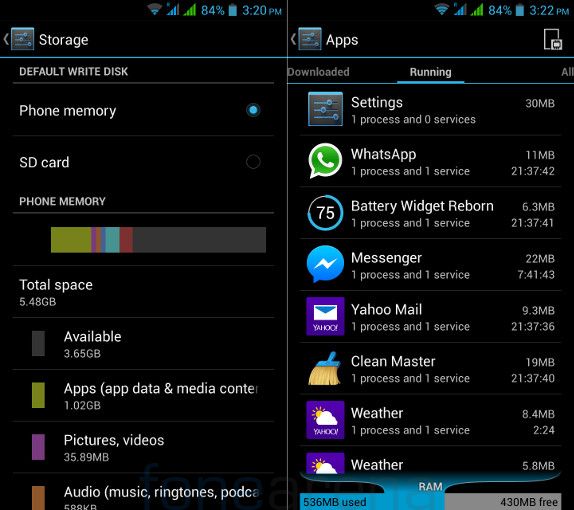 The phone has 5.48GB of internal memory out of 8GB of storage. It has 966MB of usable RAM out of 1GB RAM, and about 430MB of RAM is free when the apps are running in the background. It has option to set default write disk to phone or SD card. You can directly install apps to SD card, but you can’t move apps from phone memory to memory card or vice versa. 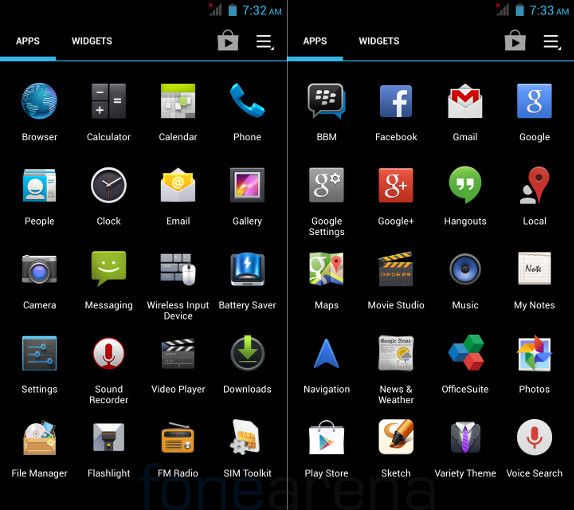 The phone comes with a range of pre-loaded apps. In addition to the usual set of utility apps and Google apps, it comes with Battery Saver, BBM, My Notes note taking app, OfficeSuite, Sketch and Variety Theme that has new themes. 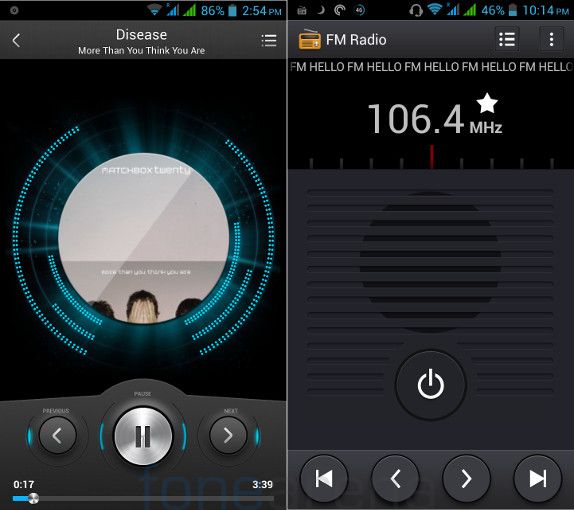 The phone has a different UI for music player and FM Radio. It can play a range of audio formats and has equalizer, bass boost option when using earphones and more. The music player also offers nice visualization when a song is playing. The FM Radio has RDS, auto search and recording. Audio from the bundled in-ear headset is decent and audio from the loudspeaker is pretty good. Since the loudspeaker is present on the back, audio gets muffled when you place the phone on a flat surface. 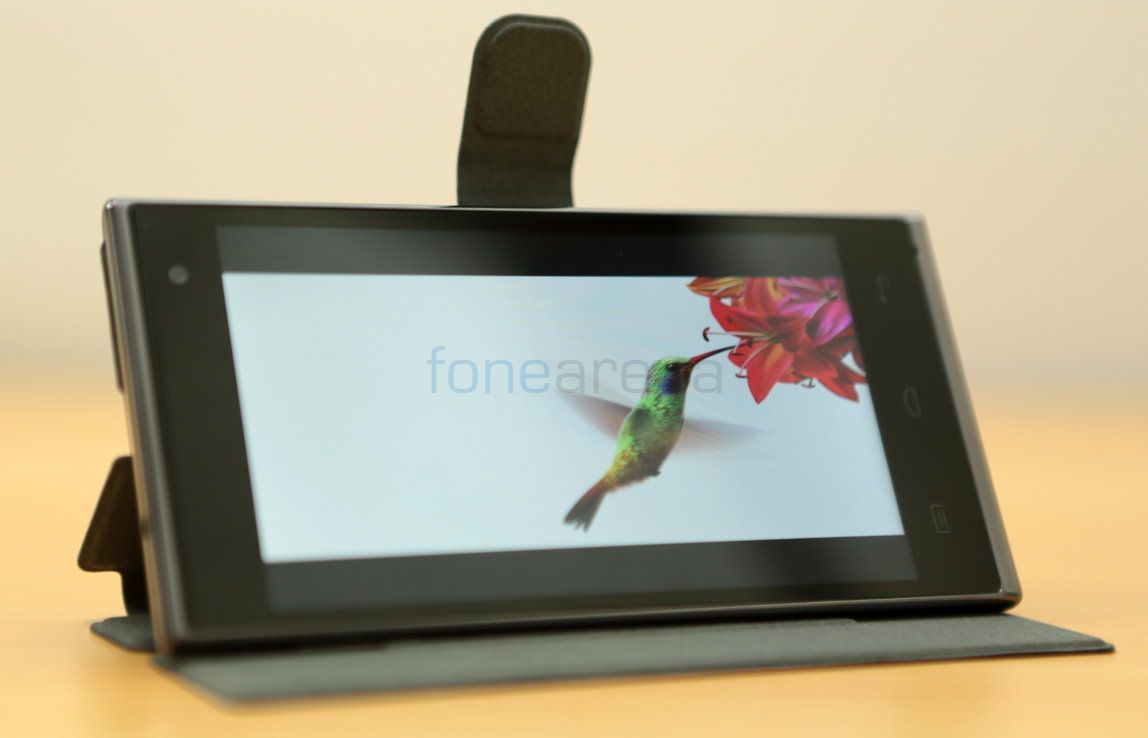 The phone can play 1080p full HD videos smoothly. The bundled flip cover doubles up as a stand for watching videos comfortably. 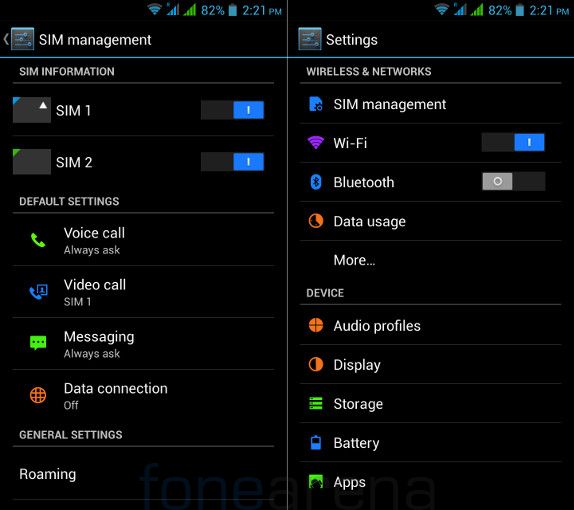 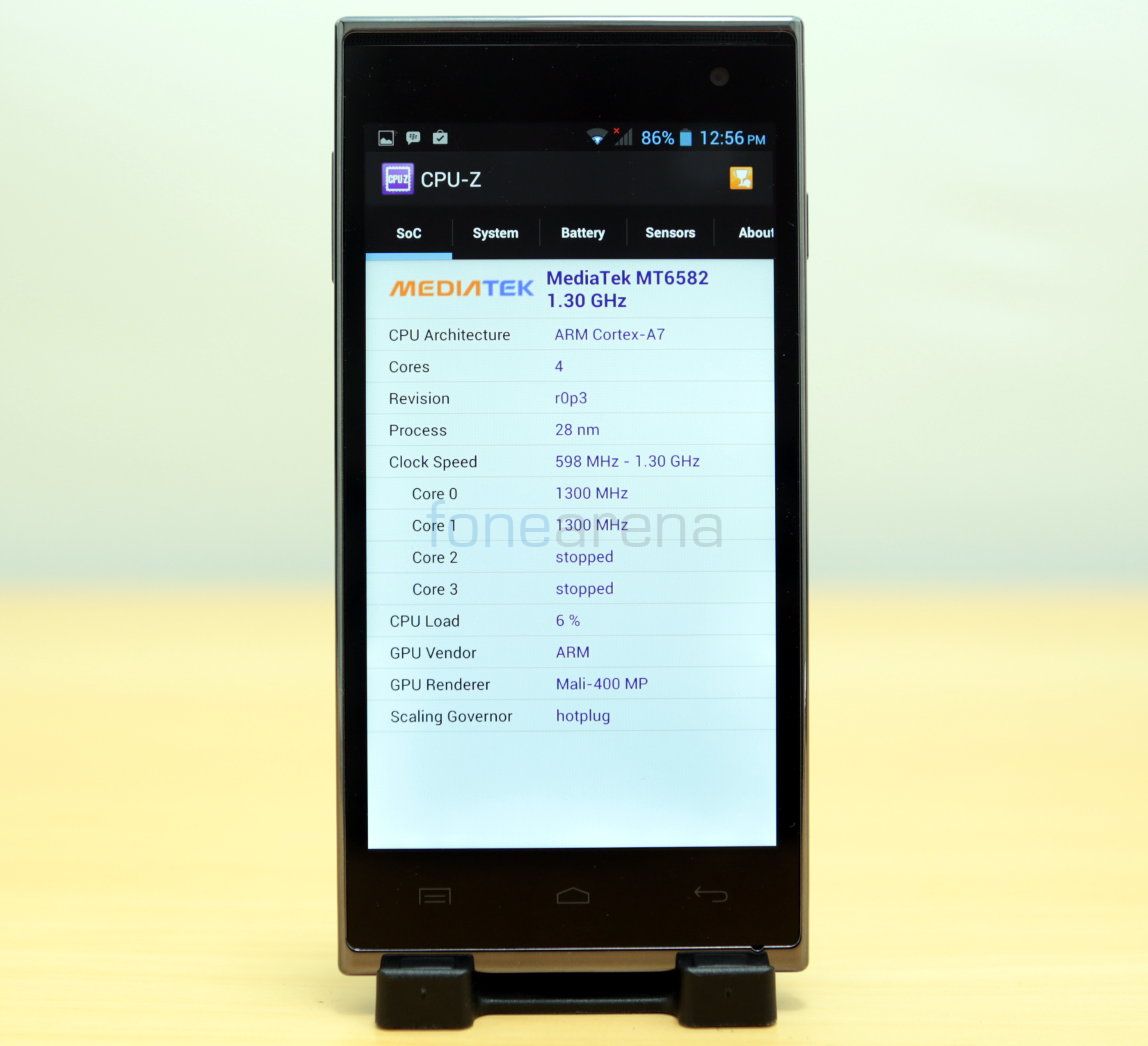 It is powered by a 1.3 GHz quad-core MediaTek MT6582 processor with ARM Cortex A7 cores and Mali 400 GPU. The performance is good without any lags. Check out some synthetic benchmark scores below. 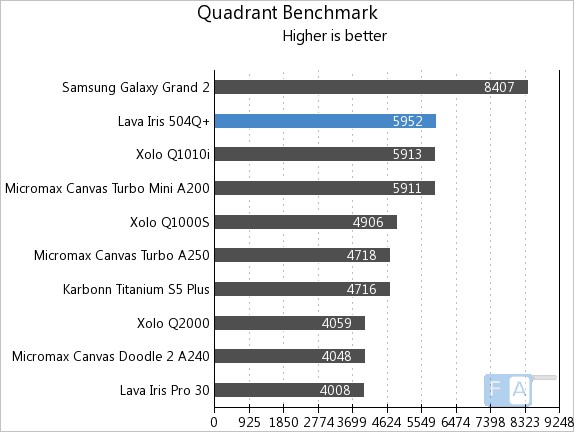 It scored 5952 points in the Quadrant benchmark and lies just above Q1010i. 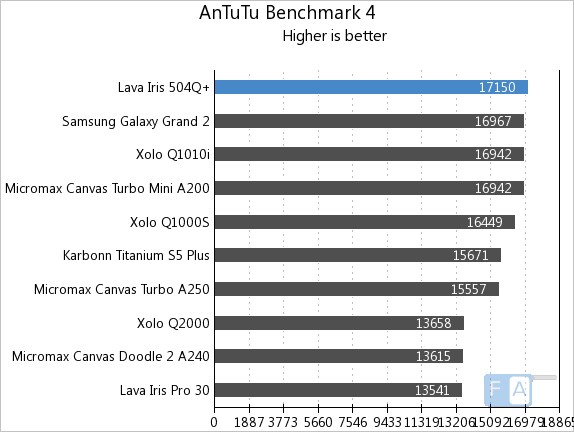 It scored 17150 points and topped the AnTuTu Benchmark 4. 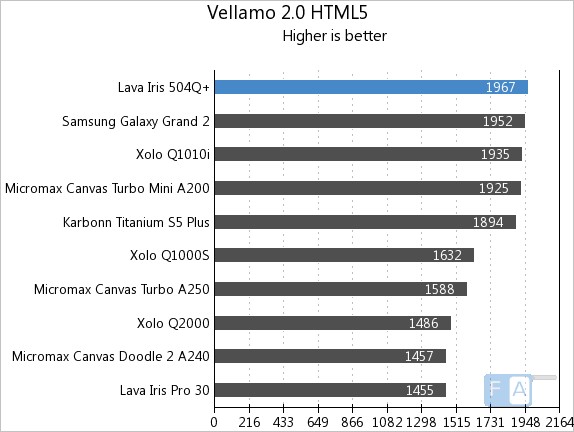 The phone has a Mali-400 MP2 GPU. We tested out some games on the phone. The gameplay performance was good, but it had occasional frame drops in some high-end games. Check out the gameplay video of Asphalt 8.

Check out the gaming review in which we test out the games like Asphalt 8, Shadowgun, Riptide GP2 and Dead Trigger 2. 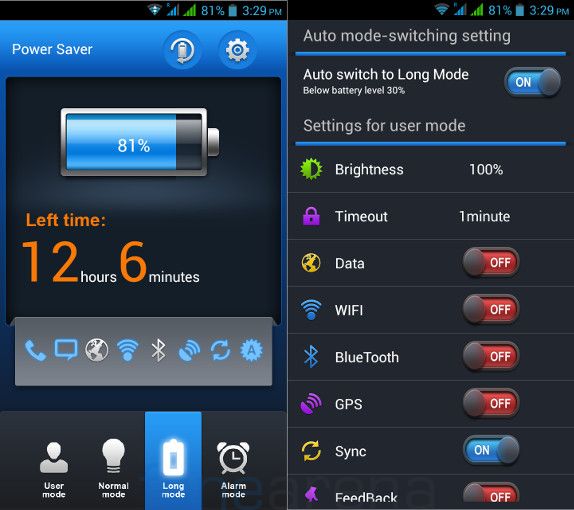 Coming to the battery life, the 2000mAh battery lasts for less than a day even with average use. With heavy use such as 1080p video playback and 3G, the battery will drain quickly. It comes with a power saver app that lets you enable several modes to conserve the battery by turning off data, WiFi, GPS, Sync, etc. when it reaches a certain threshold.

At a market price of Rs. 12999, the Lava Iris 504Q+ is definitely a decent smartphone competitively priced compared to other phones in the similar range. It has impressive display, solid build quality and the overall performance is good too, but the camera is just average even with the Sony Exmor RS sensor. If you can live an average camera and less than a day battery life for the display and solid build, go for it.