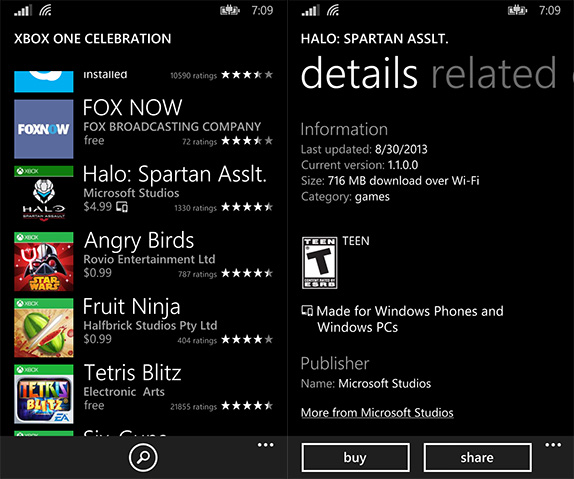 Just after rolling out the Windows Phone 8.1 Developer Preview, universal Windows apps, the key factor Microsoft aims to attract developers with, are already starting to show up on the store. Microsoft announced this new addition, along with several other enhancements to the developer side of things on Windows Phone, in a blog post today. Developers can now link their Windows Phone apps and Windows apps, as Microsoft has unified the Store front on both the platforms, with the same pricing and even streamlined in-app purchases. Apple has been allowing universal apps between the two form factors iOS is based on, but Microsoft is taking it to another level with support for all of its consumer platforms that occupy a wide range of form factors, from phones to tablets to desktops and even its Xbox gaming console on a TV.

Microsoft had unveiled “Universal Windows apps” at the Build developer conference recently. This new approach has been possible primarily due to Windows Phone 8.1 gaining the same WinRT APIs as its bigger brother, Windows. While both the operating systems already operated on the same core, Windows Phone 8 still used a subset of the more robust WinRT APIs for the Metro environment, but on WP8.1 they are on par, which makes it a lot easier for developers to target apps on both the platforms. The Visual Studio development suite, that is used for making Windows and Windows Phone apps, has got its own developer preview release, where it will let devs share code between the platforms while working on the same appX package.

The best thing about the current implementation of universal Windows apps for consumers is that developers can even just link their existing apps on both Windows Phone and Windows, and that will make the one-time purchase possible for us.  Of course they won’t share the code, but there are already ways to share app data using the cloud, so if the apps already do it, it would be extremely easy to link them, like the example shown in the lead image.

After a long time, we think Microsoft are finally ahead of the others. With Windowed Metro apps incoming, developers can target a wide array of form factors with a single app package, whereas Google and Apple have different policies in place. While Google is in the process of streamlining the app situation, thanks to Sundar Pichai being at the helm of Android and Chrome, we still haven’t seen Apple announce anything around this. That said, do you think Microsoft on the right path? Will this mean more apps on its platforms? We certainly hope so, because competition is always good. Meanwhile, let us know what you think of this new development, in the comments section below.