Nearly four months after its global launch, Huawei has finally brought the Ascend P6 to India. The Android smartphone is priced at Rs. 25,750. What makes this phone stand out in the massive Android market, is its absolute slim design. Aesthetics compliment the extremely light body that weighs mere 120 gms. It is one of the biggest launches by Huawei in 2013 and is expected to get a successor only next year ! 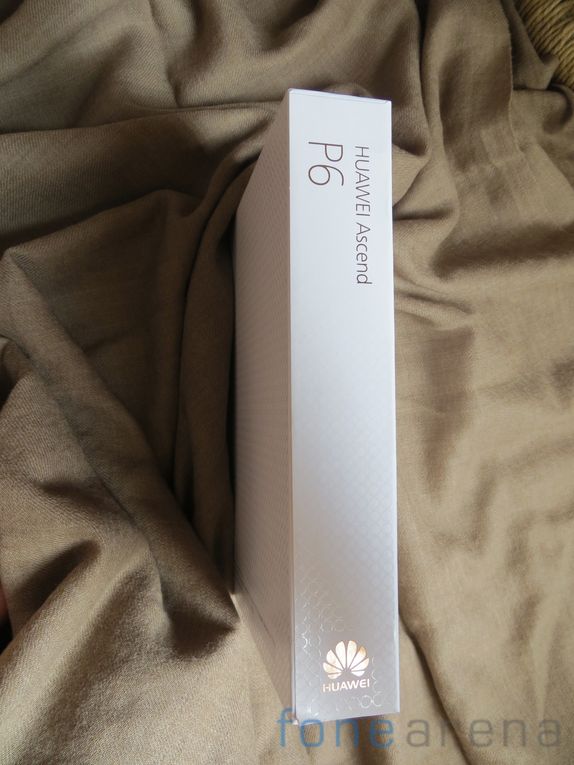 FoneArena has shown you several glimpses of the phone from International events, now the box is right here with us for the unboxing. Lets see what accompanies the slim phone.

The box is a plain white thin package. with branding in silver print. 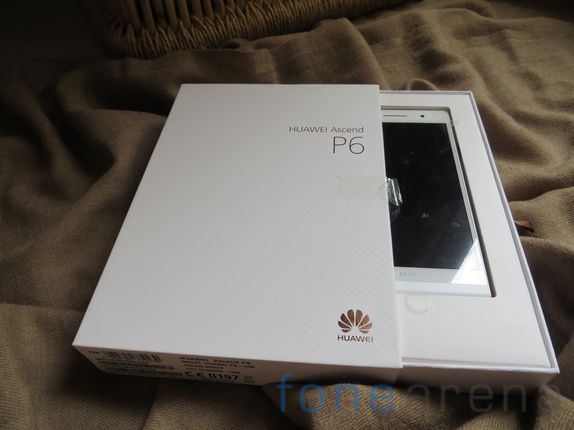 The phone sits comfortably in a tray that slides out without much struggle. 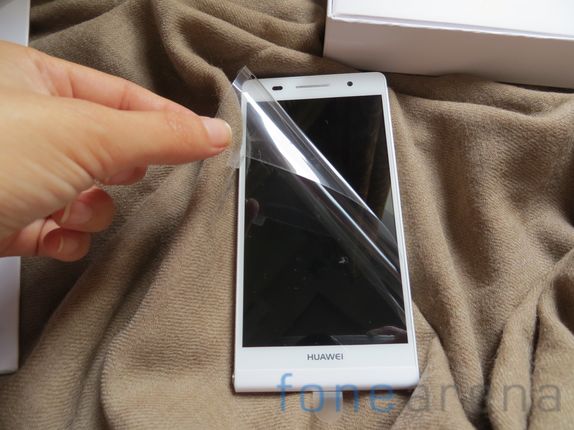 The packing is elegantly done to match the theme of the phone. The pretty white handset is wrapped neatly in factory plastic. 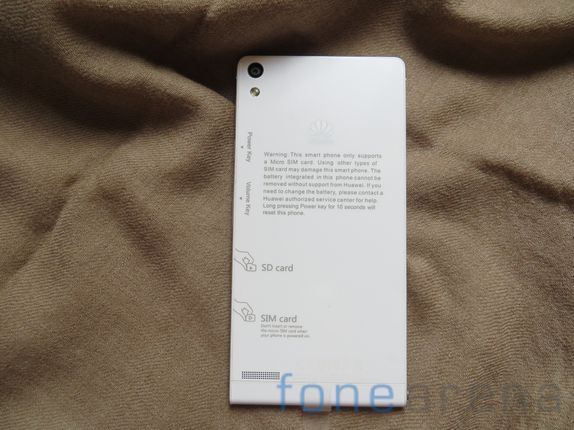 The back plastic sheet is wisely printed with signs indicating the slot names and method of access. 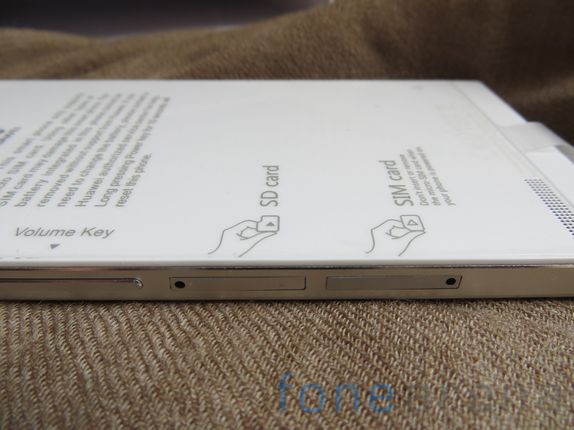 The Ascend P6 comes with 8 GB inbuilt memory but also offers a micro SD card slot. P6 supports a micro sim. Both slots are placed adjacent to each other. 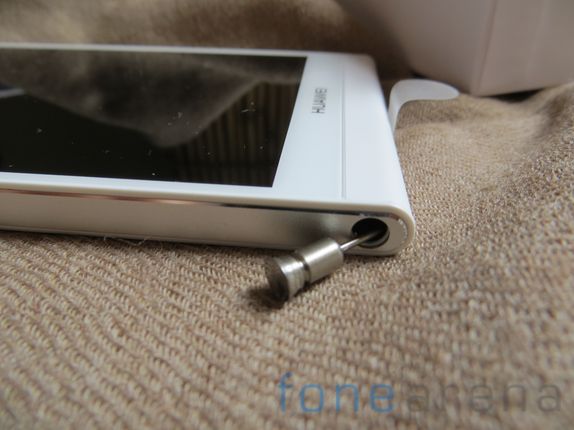 An interesting and unusual aspect about the phone is the placement and utilisation of the 3.5 mm audio jack. It is placed on the bottom side of the spine and is covered with a sim slot opener pin. Genius to add the pin inside the phone, for the sake of the sim slot. However this tool might not be of much use as it will be easy to lose the pin while using headphones, with no other alternate space to fix the pin in. 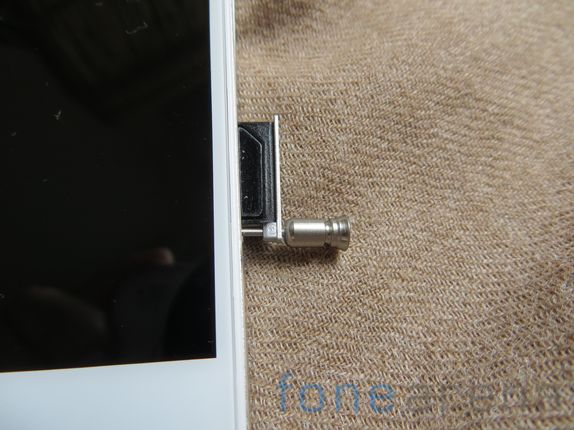 The pin can be used to open the SIM and the micro SD card slot. 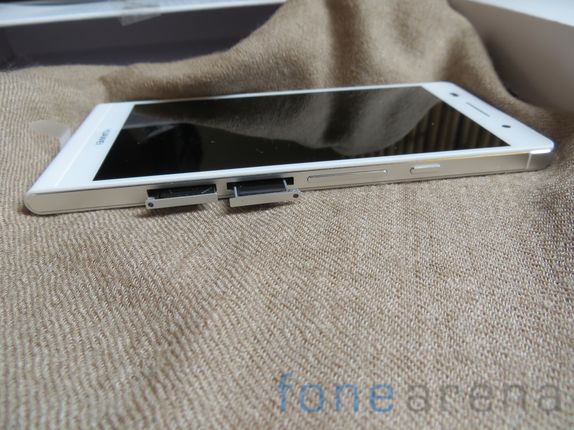 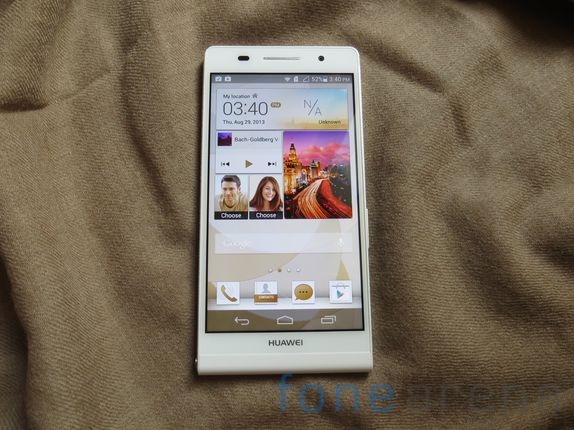 The Ascend P6 once powered up, shows the beautiful Emotion UI on the homepage. The phone runs on 1.5GHz Quad-core CPU K3V2E processor and has a 2GB RAM. The P6 comes set with Android 4.2.2 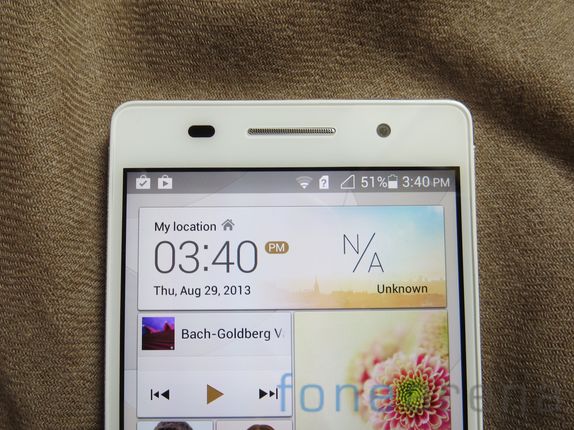 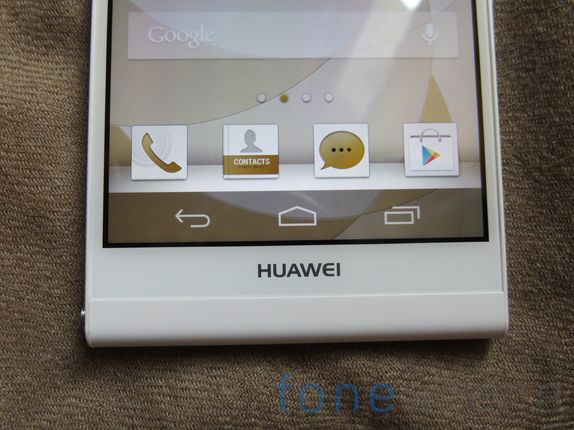 Bottom side of the screen sports the branding and the three touch, onscreen buttons. 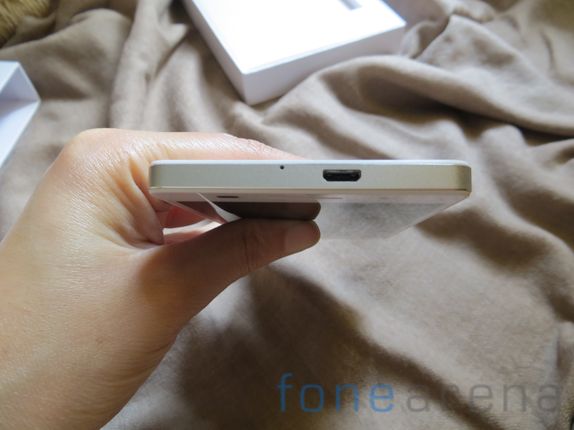 Top side of the phone has the USB slot. 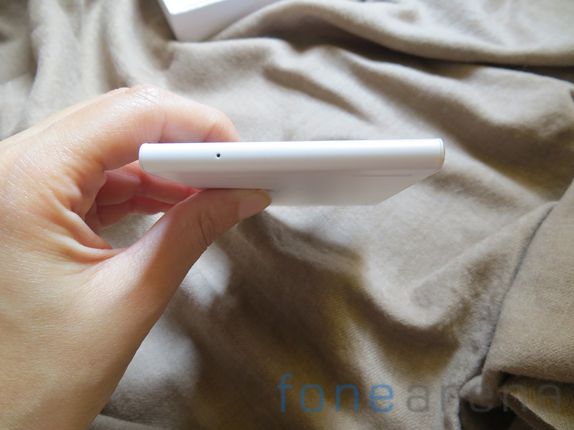 Bottom side has a signature cylindrical curve that makes it easier to rest the phone in hand while typing with single hand. 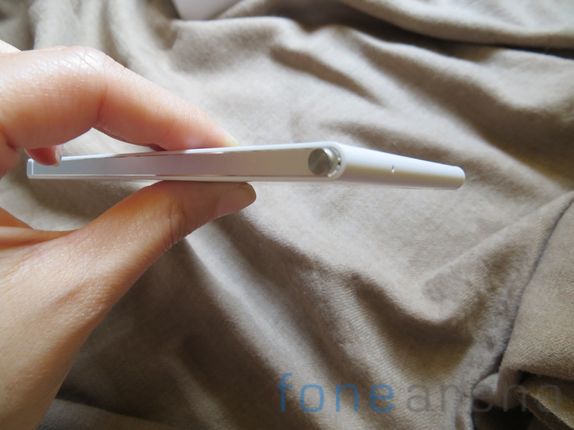 One side spine has the pin and the audio jack. 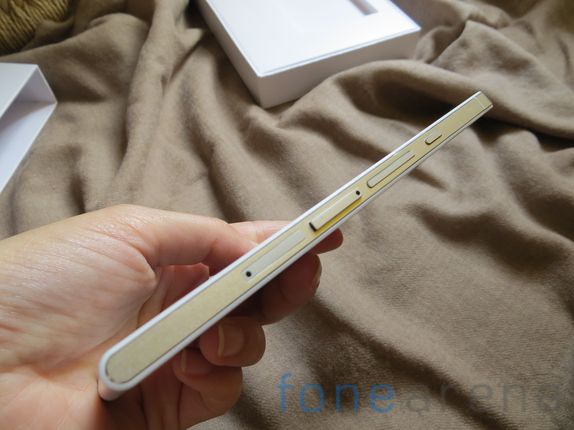 The other side spine is where all the slots and other necessary buttons. Sim, memory card slots are accompanied with the volume and power button on the same side. 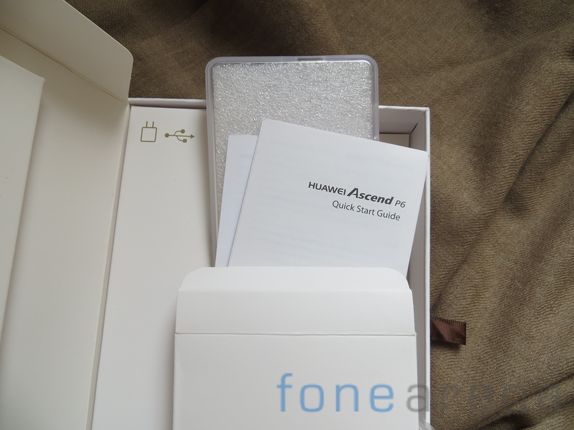 Ascen P6 phone box has another bunch of boxes. One is filled with user guide and other booklets. 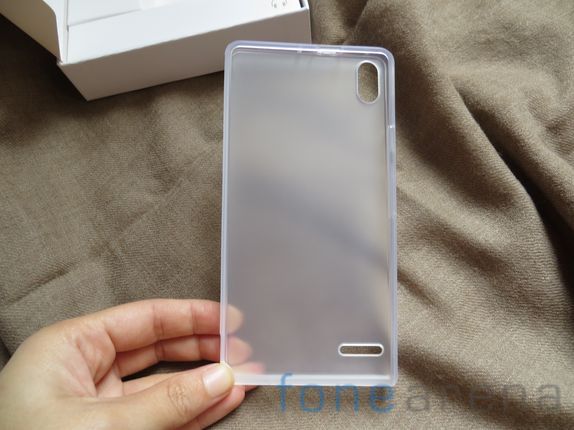 The box includes a translucent back cover – for the White Ascend P6. A very useful accessory that is well built and clearly well tailored to fit the 4.7 inch touch screen phone. 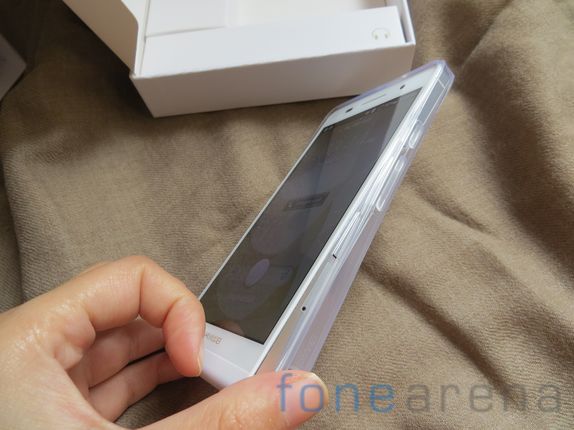 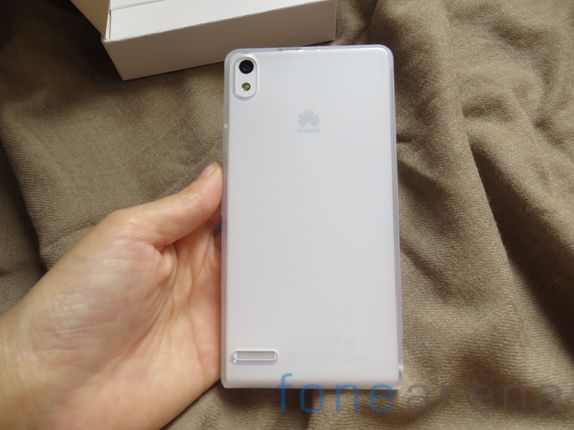 The cover is a worthy accessory in the box to protect the beautiful white colour of the device. The rare side 8MP camera supports 4cm macro view, which means pictures taken of objects at a closer distance from the camera, will be clearer than cameras who do not support this feature. 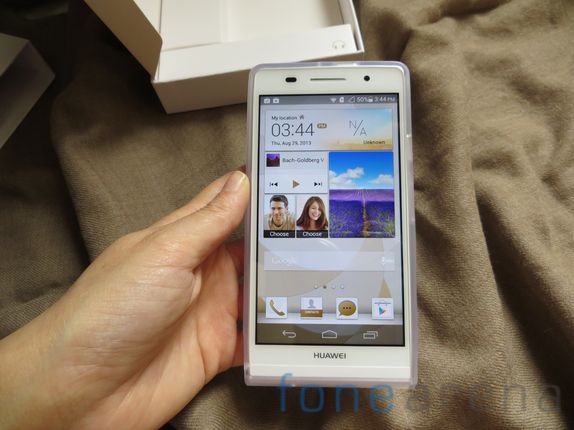 The cover is very light weight and thin. It does not take away from the phone, its USP of being the slimmest and lightest android phone. 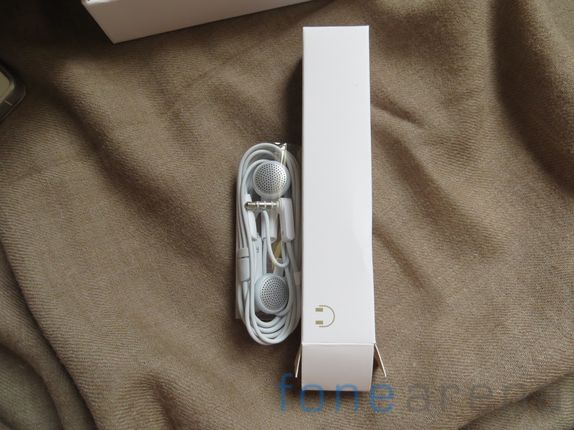 Also in the box are a pair of good quality headsets. Colour is white, to suit the handset shade. 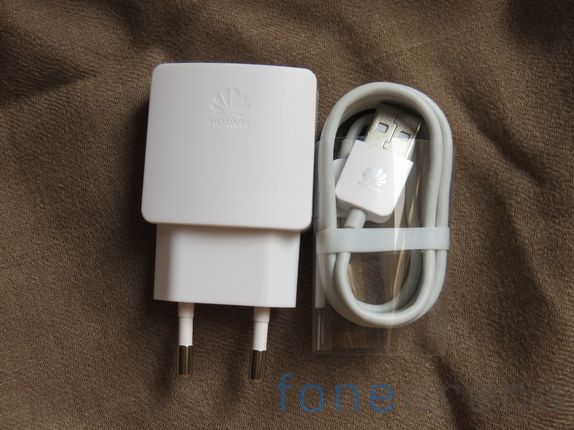 Two pin charger with USB cable. All of the accessories are made with good quality material. 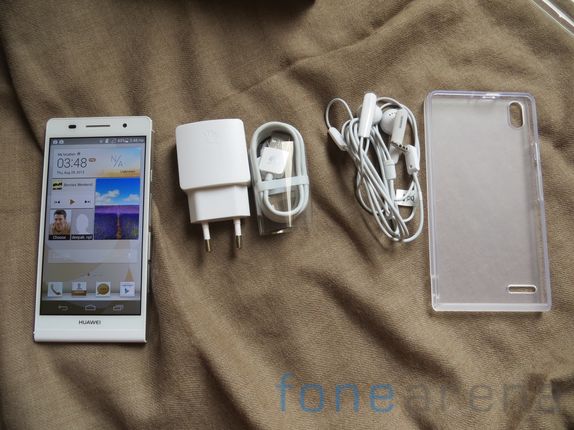 All the inbox material from the Huawei Ascend P6. 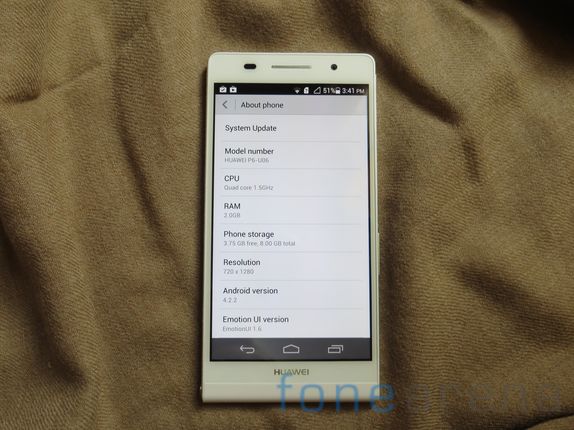 Huawei sold about 32 million Smartphones last year. In 2011 the number was 20 million. The ICT company’s target for smartphone sales in 2013 is to reach 60 million smartphones.

The markets that have proved to be profitable for Huawei smartphones, so far are China, Japan, UK, Sweden, Russia and Latin American countries. Huawei now hopes to tap Indian consumers interest too with its soon to be launched Ascend P6 and economy range phones in the G and Y series.