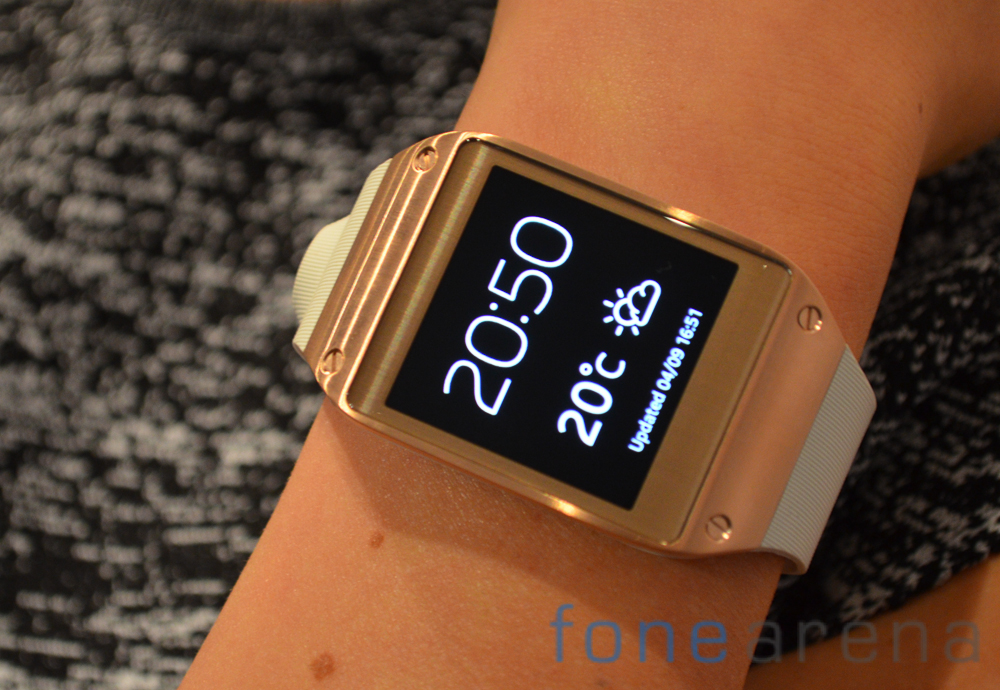 Much has been leaked about Samsung’s Galaxy Gear smartwatch. Today at the Unpacked Event in Berlin, we finally got a chance to see for ourselves if the Korean giant’s first efforts to enter into the world of wearables would be something special and here are our first impressions of the Samsung Galaxy Gear. Shaped like a conventional watch, the Gear is chunky to say the least. It might not be the most visually appealing smartwatch but it’s not an eye sore either. The front is essentially a 1.63 inch AMOLED display with a resolution of 320 x 320. 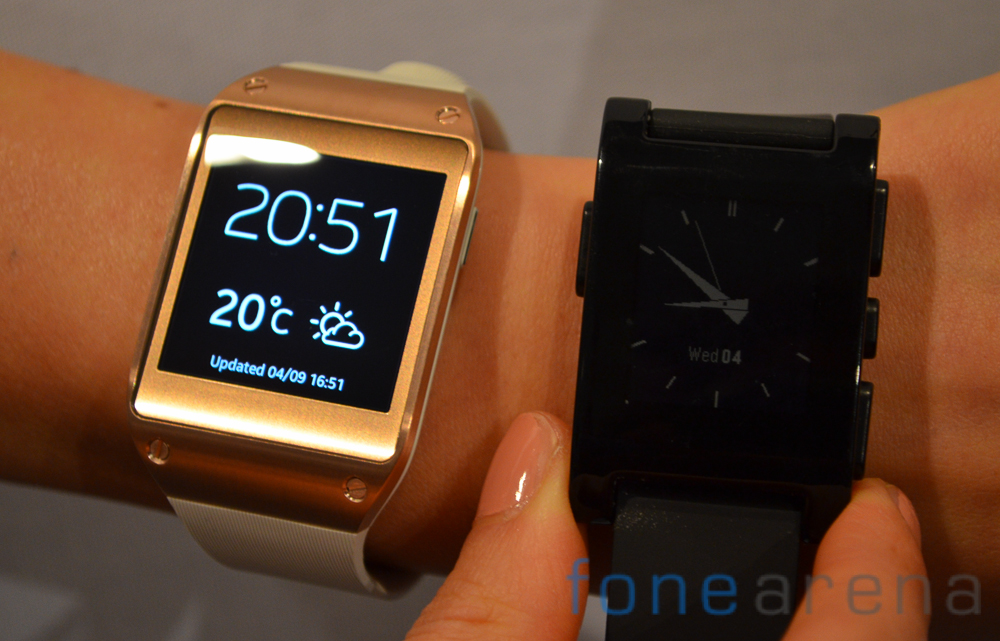 To the right of it is a single button that lets you move up a menu page or head back to the home pane. Placed next to the Pebble smartwatch, the Gear definitely looks large but then it also packs a lot more under the hood. Surrounding the display is a metal band that looks surprisingly good. On the flipside, it makes the pretty large watch equally heavy. Pure aesthetics apart, we feel that the metal band around the display should also help dissipate any heat generated by the 800Mhz processor. 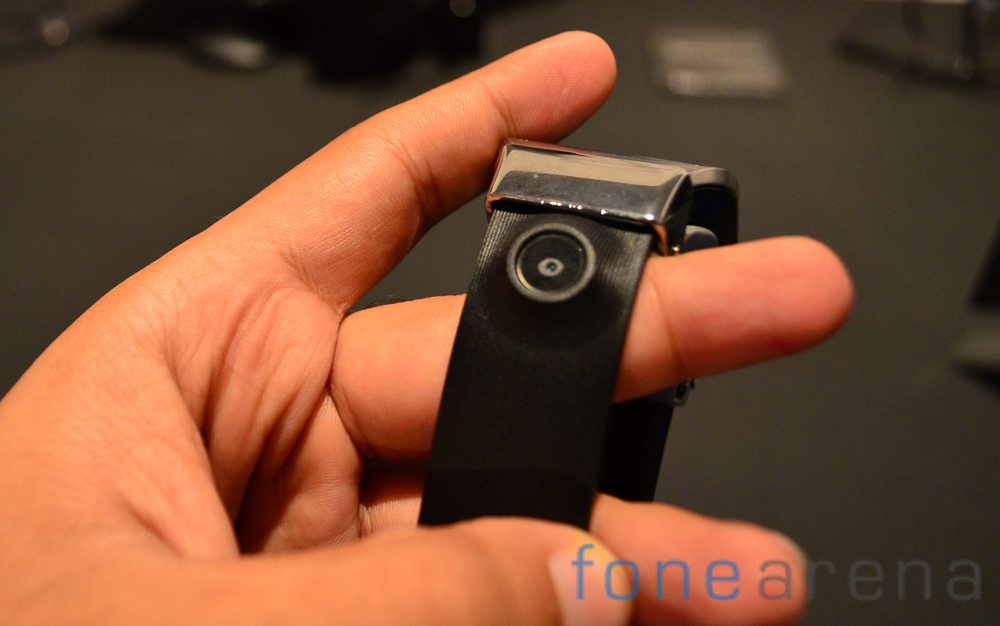 The Gear has a 1.9MP autofocus capable camera built into the side of the strap. This’ll let you shoot photos and videos at upto 720p resolution. Don’t expect it to be the best quality but it’ll do for taking some covert shots and more importantly in conjunction with the variety of apps being built around the watch. The band itself is made of rubber and feels nice but not very high quality. It is not possible to interchange bands on the Galaxy Gear because of the camera module that is built in. 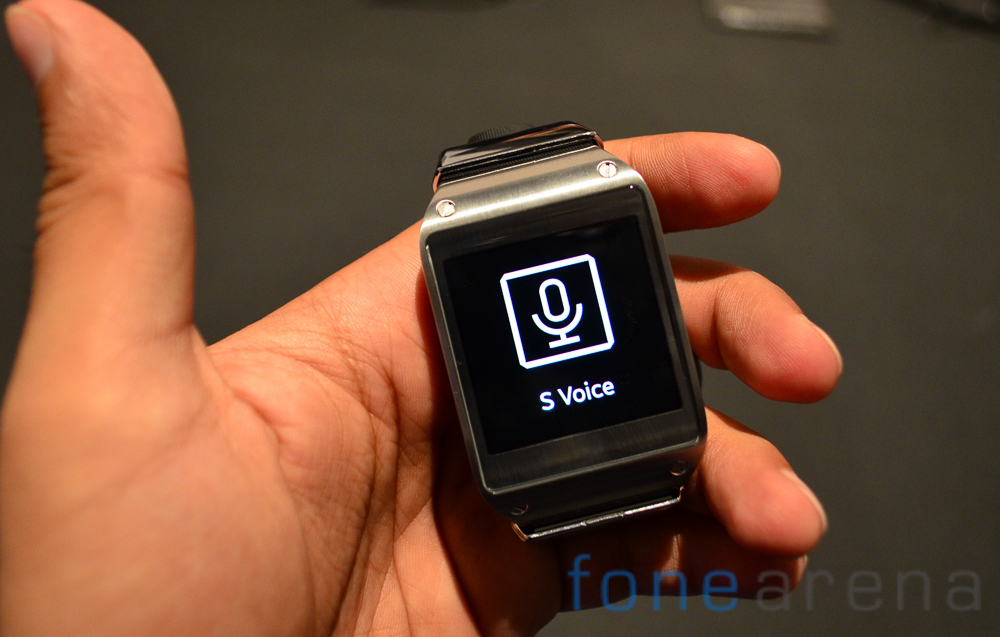 Powering the show is an 800Mhz processor with 512MB of RAM. There’s also 4GB of storage built in. The watch communicates with the paired handset over Bluetooth 4.0. At launch, it’ll work only with the Note 3 and the Note 10.1 but Samsung aims to increase compatibility over time.

There’s a 315 mAh battery built in which doesn’t sound very reassuring. Indeed the watch is expected to last under a day on a single charge. With active use of the fitness related sensors, this number is expected to go down even further. Apps at launch will include Evernote, Pocket, Runtastic Pro amongst about 70 others. The Galaxy Gear will launch at a price point of $299 in 6 different colors including Jet Black, Mocha Gray, Wild Orange, Oatmeal Beige, Rose Gold, and Lime Green.