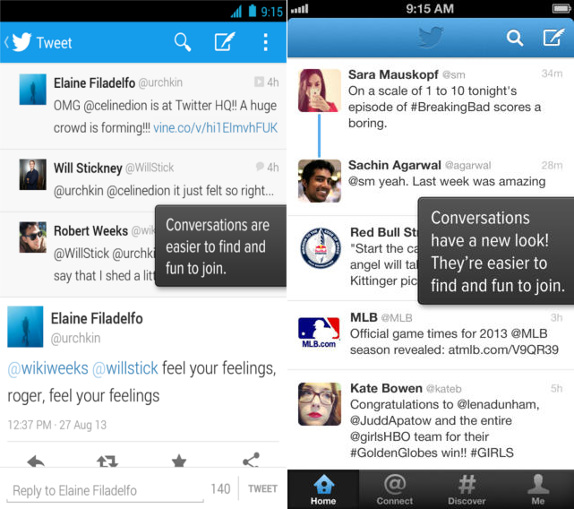 Twitter has updated both the Android (v 4.1.6)and iPhone (v5.10) apps with a new conversation view. Now, Tweets that are part of a conversation are shown in chronological order. Up to three Tweets are shown in a sequence in the home timeline, once you tap a Tweet, you can see all the replies, including those from people you don’t follow. Both these app also get new notification settings and the Android app now lets you report tweets as spam.

Twitter for Android has been streamlined entry-level Android smartphones with limited storage (such as Samsung Galaxy Y, HTC Explorer, Micromax Bolt, etc). The app is now less than half the previous size, so it’s faster to download and easier to install. Twitter has promised that they would improve the app targeted at entry-level Android smartphones, making it more accessible to people around the world.

Download Twitter for Android from the Google Play Store, and Twitter for iPhone and iPad from the Apple iTunes Store for free, if you don’t have them yet. The new conversation view feature would roll out gradually.