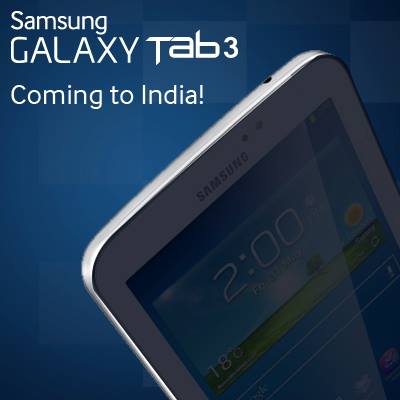 The Samsung Galaxy Tab 3 7.0 and 8.0 inch devices were launched separately, with one device announced in April and the other on the 3rd of June, with not that much of a fanfare. In less than two months, it has been teased as “coming to India” on Samsung’s Facebook page and is also being displayed as “coming soon” in the Samsung India eStore for the both the models. The Galaxy Tab 3 devices are an evolution of the Galaxy Tab 2 tablet and are all equipped with voice calling capabilities, much like the original Galaxy Tab. Boasting 7 and 8 inch screens respectively, they are much of the earlier Samsung device like the Tab 2 310 and the Note 8.0. It is also likely that Samsung will be launching both the devices tomorrow, as we have just received an invite for a press conference tomorrow.

In case you are looking forward to the launch of the two devices, here are their specifications –

The Galaxy Tab 3 7.0 is just a small upgrade over the Galaxy Tab 2 310 while the Tab 3 8.0 seems to be a Note 8.0, but without a stylus. We will be covering the launch event tomorrow, so do look forward to our coverage on the blog as well as the YouTube channel. At the same time, let us know what the prices should be, in the comments section below.