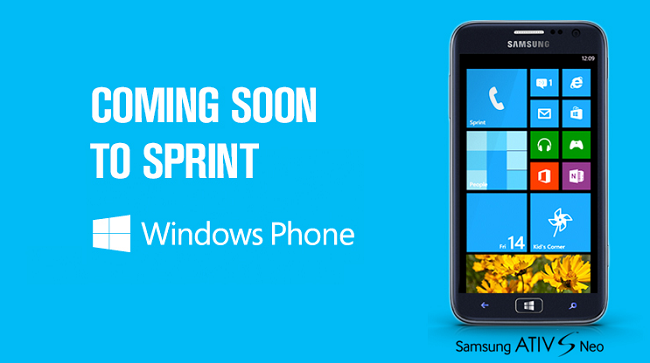 American cellular operator, Sprint, announced that it will be carrying a new Windows Phone running smartphone called the Samsung ATIV S Neo. The new handset will sport some rather interesting features including what is being called as ATIV Beam. This Samsung exclusive application will let users ‘beam’ across photos, music and videos to other Windows Phone 8 and select Android devices.

The specifications include a 1.4Ghz dual core processor and 1GB of RAM. The handset features a microSD card slot and a 4.8 inch HD display. An 8 megapixel camera can be spotted at the back while a front facing 1.9MP camera can be seen above the screen. The camera app includes several preloaded lenses like the Beauty Shot mode for smoother looking skin in headshots, Manga Camera to give pictures a fun twist by turning friends and family into cartoons, and built-in Photo Editor that allows the user to edit, color, effect, decorate or share their pictures quickly and easily.The battery on the other hand is a bit disappointing at just 2,000 mAh. The smartphone will launch later this year on Sprint at a price point of $150 on a two year contract.