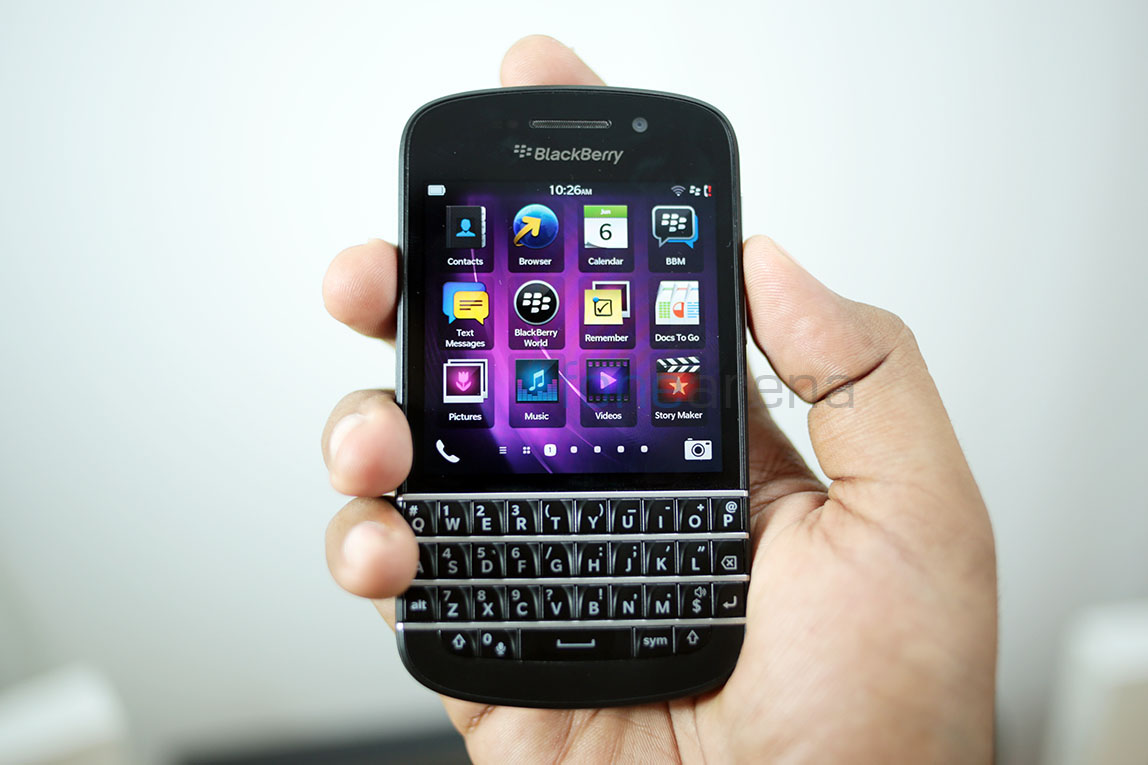 Launched way back in January after a lukewarm reception for the Waterloo company’s new Blackberry 10 operating system, the Q10’s main aim is to bring the QWERTY keyboard that the company helped popularize, back in vogue, in a touchscreen dominated world. The device was launched after the full touch flagship, the Blackberry Z10, signaling the company’s move to a complete touch experience at its fore, but to keep the fans happy, the Q10 had to release eventually. And yes, it has finally landed in India, with a hefty price tag of Rs. 44,999. It marched into our labs the same day, and here are our first impressions of the device.

The first thing you’ll notice when you take the Blackberry Q10 into your hands is how small and compact it is. The Q10 nicely fits into your palm and the splendidly rounded device is reminiscent of the legacy Blackberry carried in its various offerings. 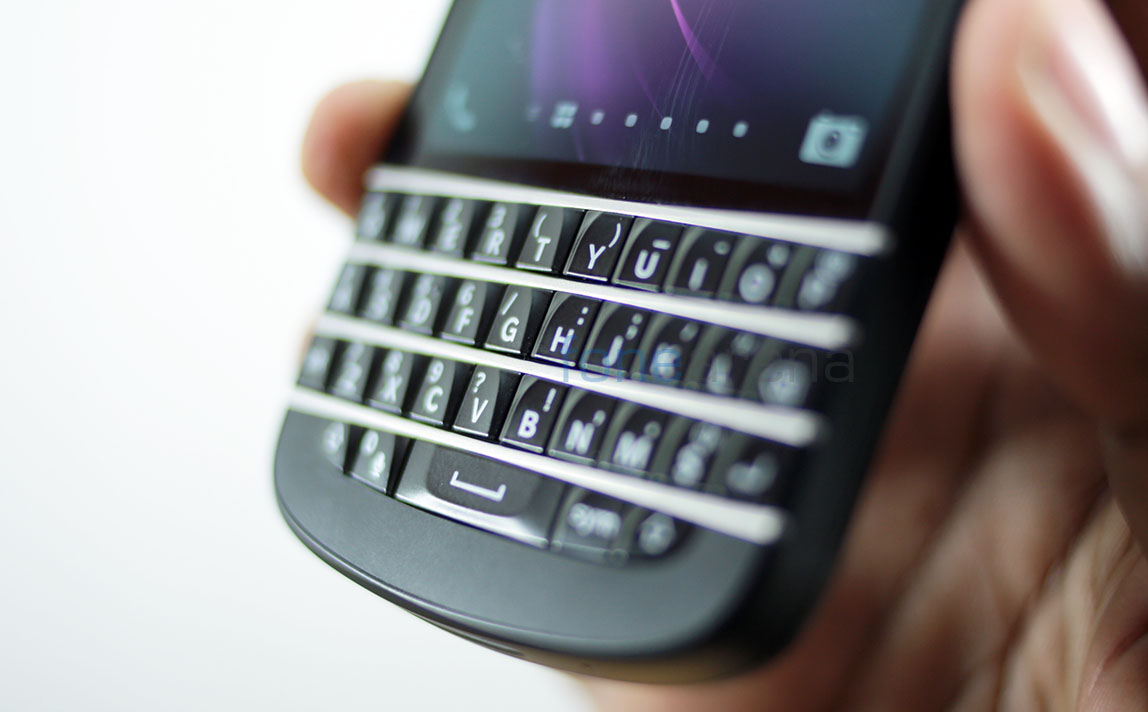 Immediate eye grabber is the qwerty keyboard of course, with nicely beveled keys styled very similar to the Bold 9900, with all the functions you would expect out of it. Being a touchscreen user since 2009, the qwerty keyboard was never missed, even after occasional flirting with devices like the Nokia E7 and E6. While it made a lot of difference to texting and overall text entry, I never missed it when switching back to a touchscreen device. And the same applies for the Q10 too. In my brief experience, the qwerty keyboard was a joy to type on, especially the fact that physical keys have evaded my fingers for long, but then, as a seasoned user of touchscreen keyboards that give access to symbols, special characters and everything else with little effort, I did find the same tiresome on the qwerty keypad. But that’s just me, qwerty keypad fans will love this to bits. 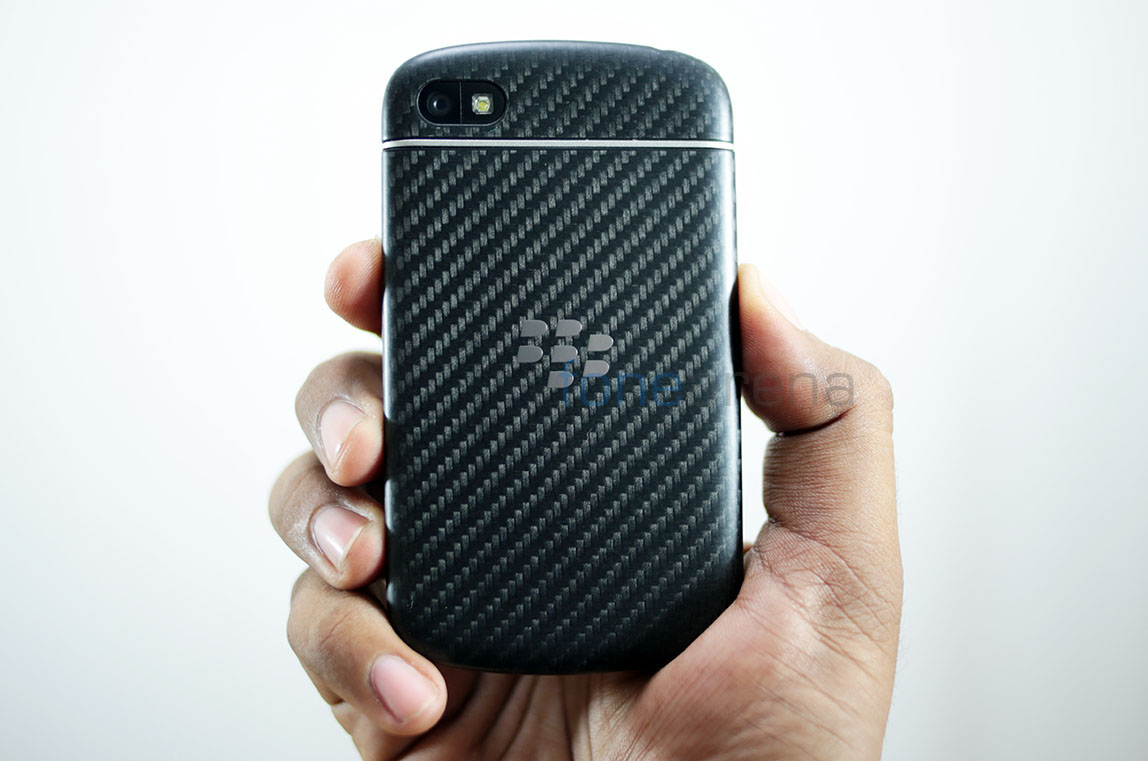 Another thing that impressed me very much is the build quality of the device. Sporting a carbon fibre weave back on an otherwise plastic+steel body, it provides soft touch feel and extra grip. Blackberry also says that every Q10 will have its own carbon fibre weave design so that no two Q10s will look the same. With a premium build, Blackberry sure has hit the right notes on quality. 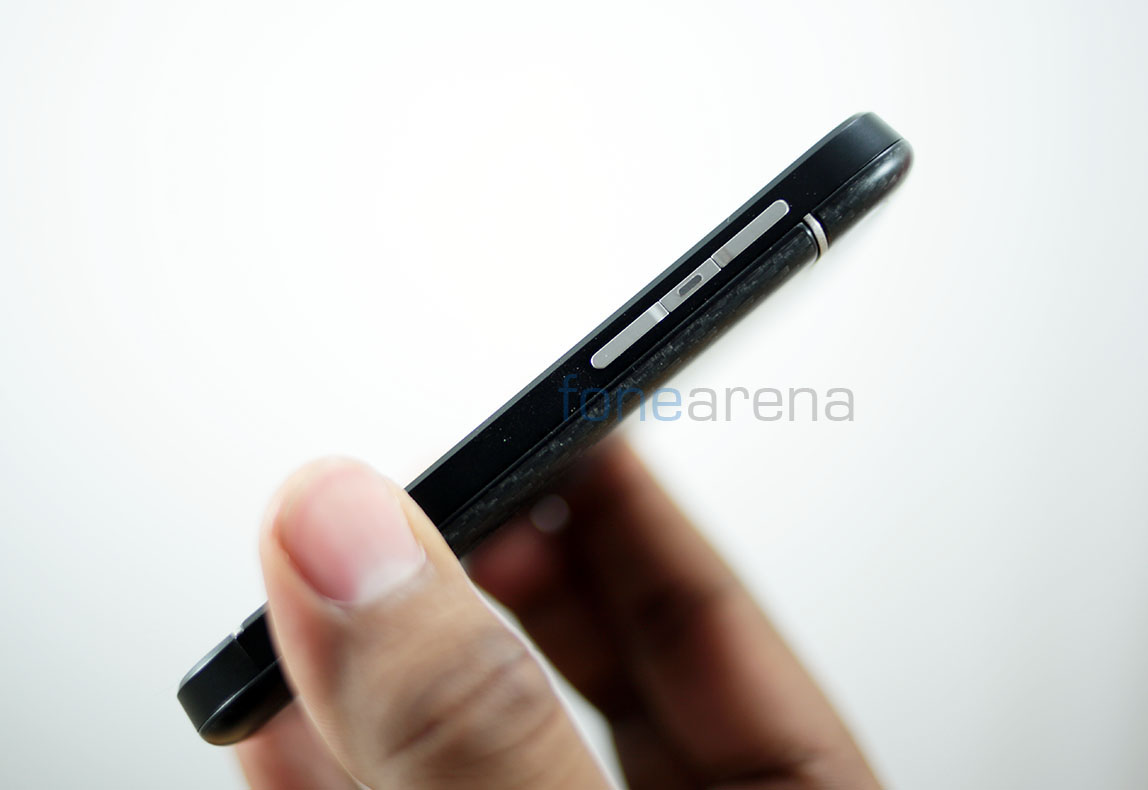 Even the buttons are made of stainless steel, much like the Playbook and the Z10, which is good. 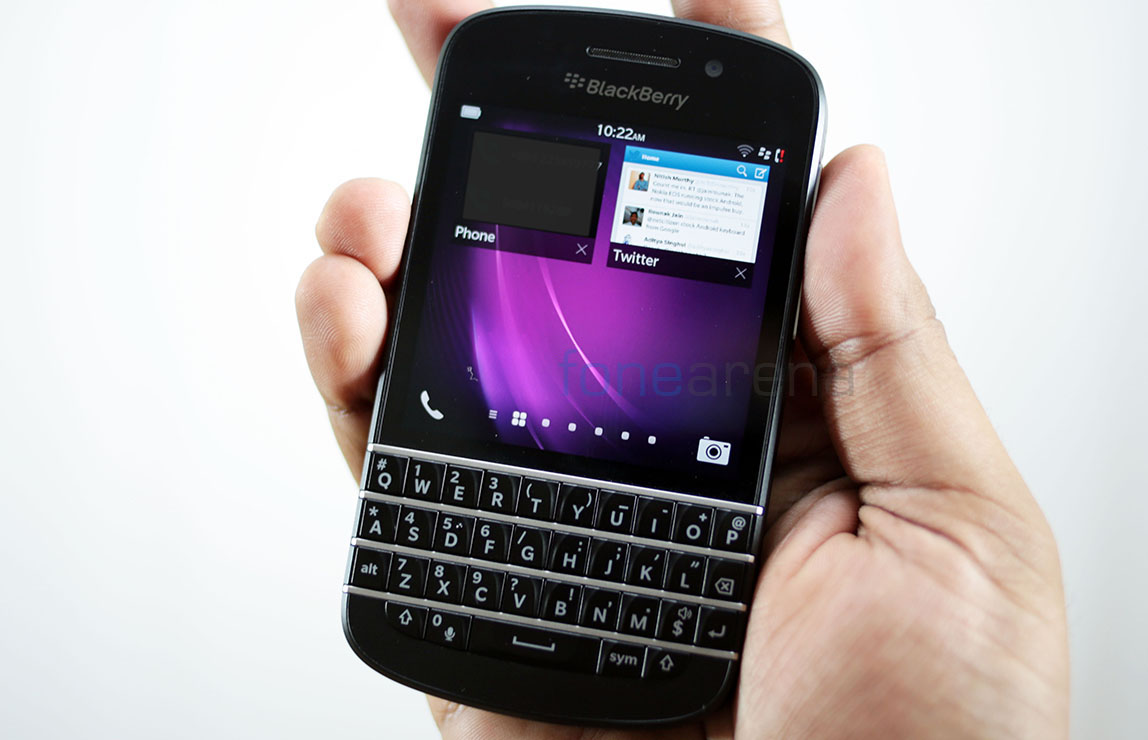 The device has a 3.1 inch 720×720 Super AMOLED display, which means that, yeah it is of the pentile nature. Even though the high pixel density masks the disadvantages of pentile nicely, with a small display and a high resolution , the text becomes obviously too small in the browser and when you bring it up close, you can’t help but notice the slight blurriness around the text. While this is an isolated use case, it is certainly not a deal breaker and the display is brilliant otherwise. 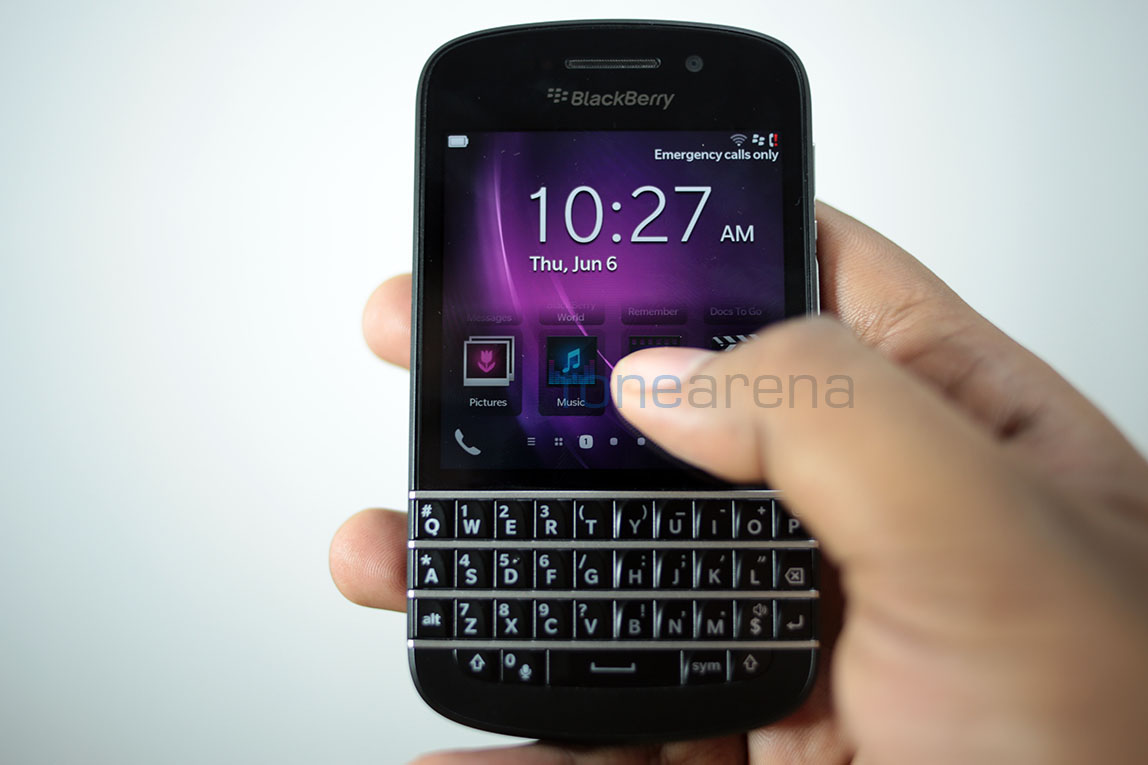 The Blackberry 10 OS was initially shown off using the Z10 primarily, but how does it conform to the smaller dimensions with a different aspect ratio on the Q10? In our brief experience, quite nicely. The swipes were actually easier to operate thanks to limited dimensions, and the OS still has everything you saw on the Z10, but the usability of apps is not the same. Third part apps like Twitter and Facebook are optimized for the Q10 already, but still, due to the constrained nature of the display, we still see truncated information, and that works for all the other apps too. I just kept on seeing less information and having to swipe up for everything. Can it be fixed? No, it is by design and unfortunately, the Q10 is designed to be like this forever. That aside, the performance of the device was brilliant overall and the animations just kept up with the pace of operations without breaking a sweat. That’s a good thing, huh? 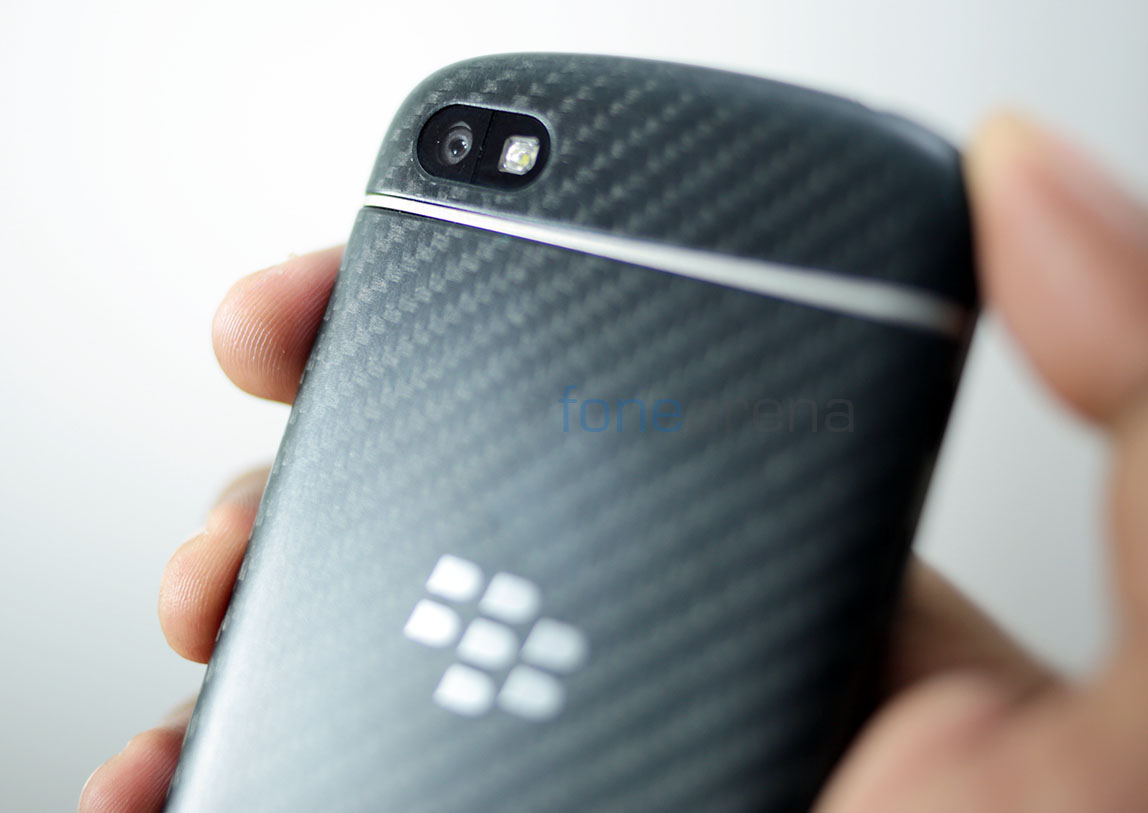 The 8 MP camera unit on the Q10 is almost the same as the Z10 and takes mediocre pictures. Not really blown away by the quality, but it is not that bad either. And like all the other Blackberry devices before, there was a notification LED that prompted with all the notifications with various colours. 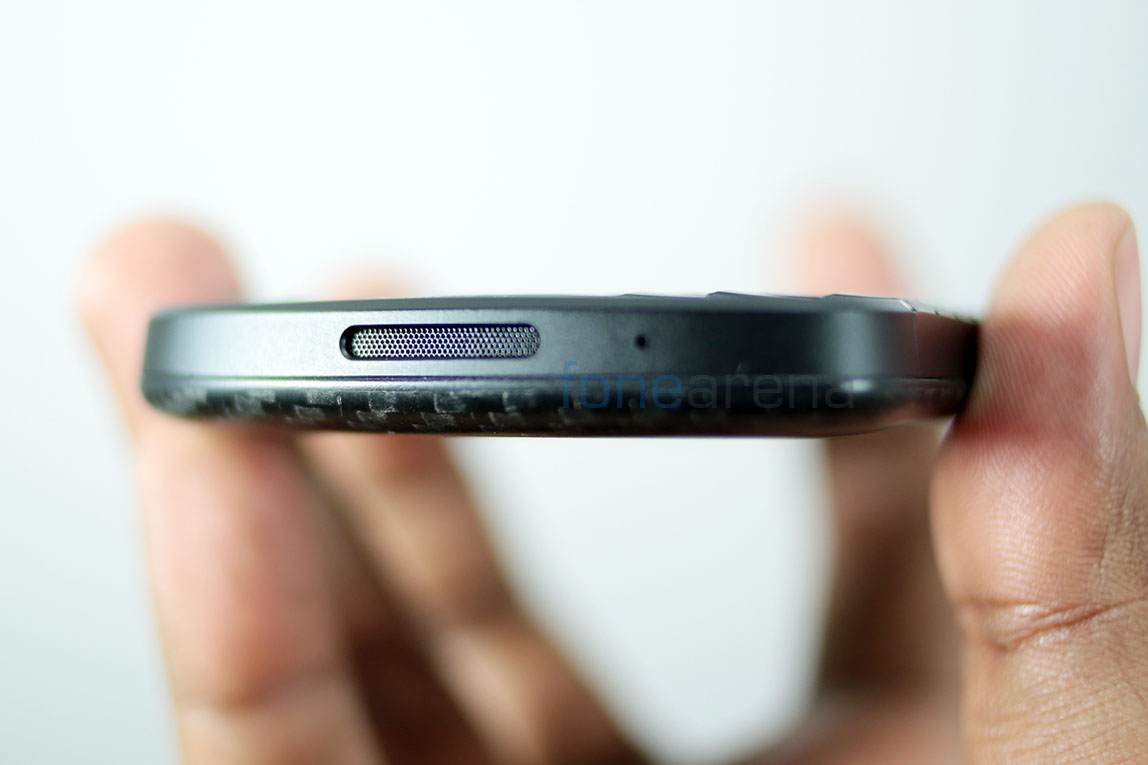 Of all, I was particularly impressed by the quality and the loudness of the loud speaker that resides at the bottom of the device along with a microphone for voice calls. 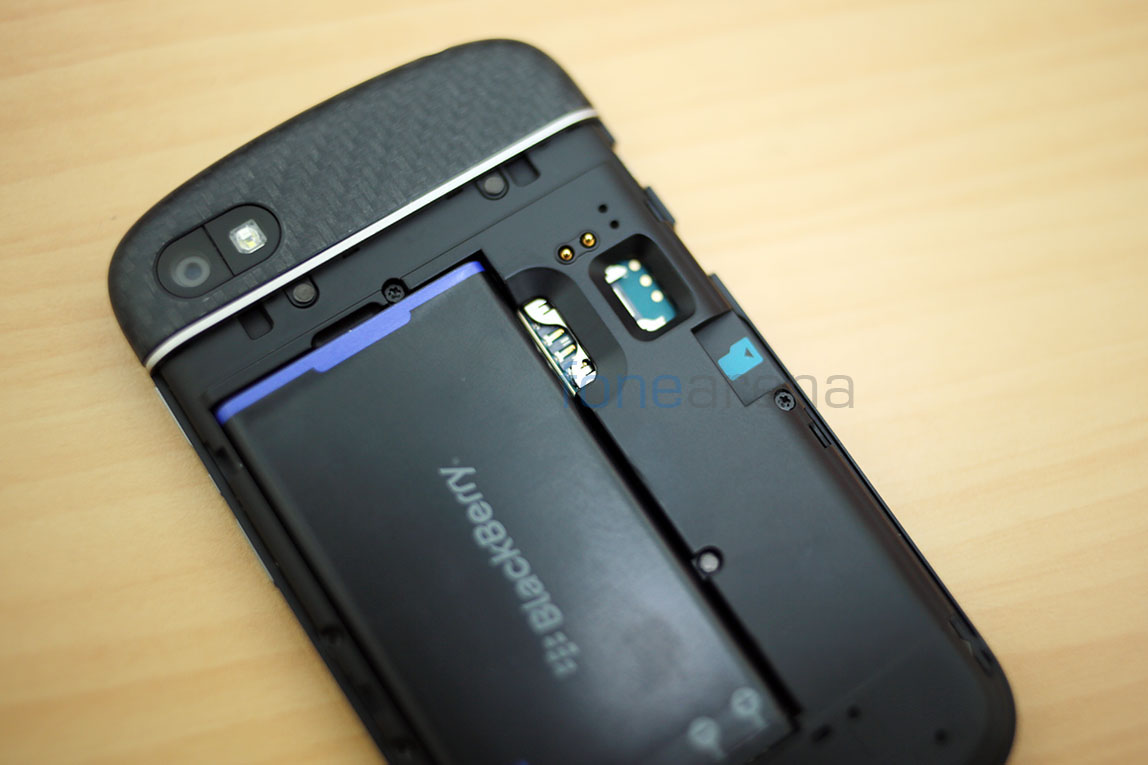 Removing the back panel reveals the battery compartment and the slots for the micro SIM and the slide-in micro SD card. The 2100 mAH battery is still running along fine after us playing around with the device for almost a day.

Overall, the Blackberry Q10 is a premium qwerty device that the die hard BB fans should be happy about. While the price may seem catastrophic for volume sales, this device is not really a mass market device, is it? That said, we await the arrival of the Q5 in our lands as it will decide the fate of Blackberry. Also, this is just our first impressions of the device, do check back for the full review as we have a lot more to talk about.

More photos of the device for your viewing pleasure.