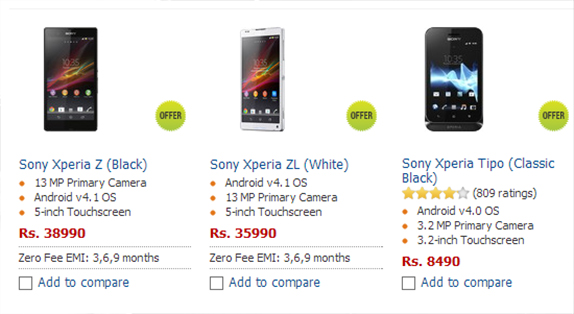 Flipkart recently revealed the pre order price for the soon-to-be launched Nokia Lumia 620, and today, they have done it again, by announcing pre order prices of the Sony Xperia Z and Sony Xperia ZL which are slated to be announced tomorrow, at a special event. The pre order prices are listed as Rs 38,990 for the Xperia Z and Rs. 35,990 for the Xperia ZL. Flipkart also reveals that the estimated delivery would be 3rd week of March, from which we can safely assume that the retail launch will be some time around the exact time frame. The Xperia Z and the Xperia ZL were announced at the Consumer Electronics show in January and have been since much awaited in the Indian market.

The Xperia Z is a waterproof and a slimmed down version of the Xperia ZL, which has a removable battery cover and is slightly bulky. That’s about the differences between both of these devices, and the internals they share are very common. The specifications of the Xperia Z are –

We recently had a hands on experience with the device, you can watch that below –

In our short hands on time, the USP of the device, the 5 inch 1080p display felt quite underwhelming. Otherwise, it’s a great phone and we already have it in our labs for extensive testing and review, so do look forward to our coverage of it.