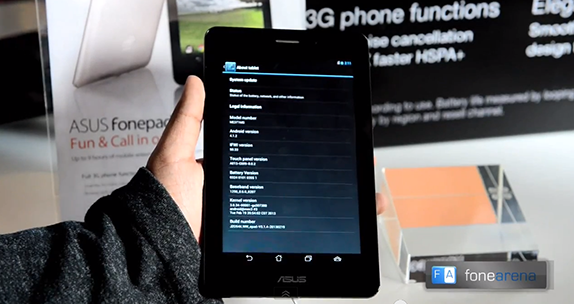 Earlier, we brought to you the photo gallery of the Asus fonepad. Now here is a hands-on video of the 7″ phablet which is set for release next month.

The device is powered by a 1.2GHz Intel Atom Z2420 processor and 1GB of RAM. It runs on Android 4.1 Jelly Bean and has a 4270 mAH battery that is capable of providing upto 9.8 hours of video playback.

The fonepad in the video is the European version which lacks a camera but has 16GB of internal memory. The US version on the other hand comes with a rear camera but has only 8GB of memory. The former will retail for 219 Euros while the latter will go at a price of 219 US$