Its been a little over 6 months since HTC launched its high end flagship device, the One X and today we have a spec bumped successor available. 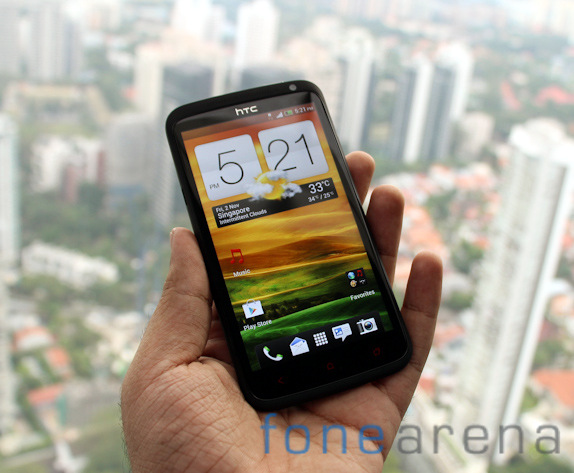 The One X+ keeps all the best features from the One X and brings a modest spec bump to one of our current favorite Android devices. Read on to find out    how the smartphone compares with the competition.

Like the original HTC One X, the One X+ remains a gorgeous looking handset with a beautiful unibody polycarbonate design. 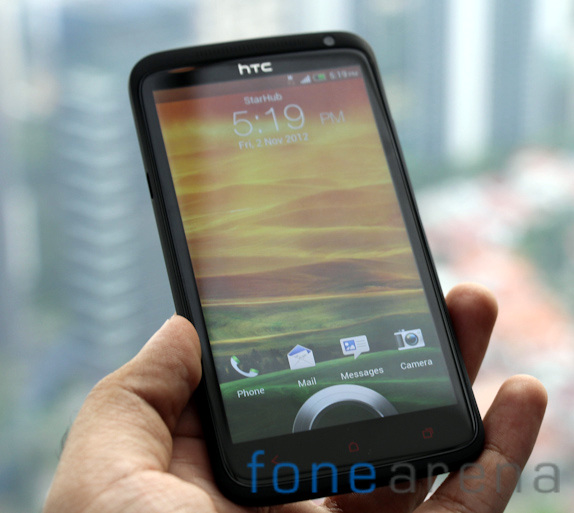 The front of the handset is dominated by a large Gorilla Glass 2 screen measuring 4.7″. The screen has a resolution of 720×1280. The front camera is a 1.6MP unit which is much improved from the camera module on the One X. We’ll have more on this under the camera section. 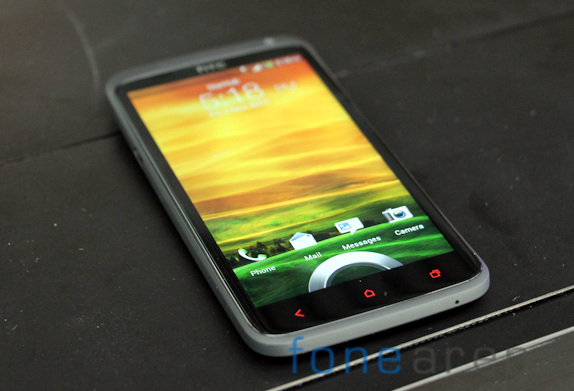 Three capacitive buttons are located below the display and correspond to back, menu and recent apps. The buttons are colored red instead of white on the One X+ model and this is one of the few ways you could differentiate between the One X and its successor. 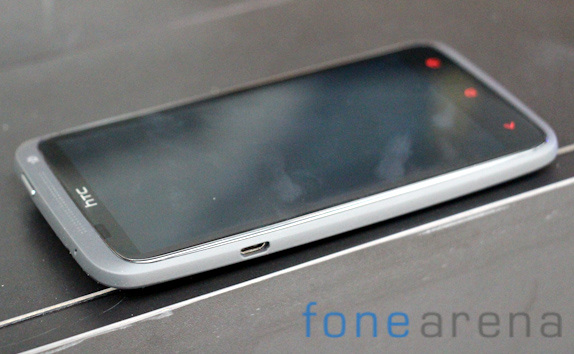 On the right side is the volume rocker while the left side houses a micro USB port. The micro USB jack doubles up as a MHL port. The 3.5mm audio jack is located at the top of the handset. Up top you can find a new redesigned power button which we felt provides better tactile feedback than the one on the One X. We wish that the power button was relocated to the side of the handset making it a bit easier to reach considering the size of the handset. 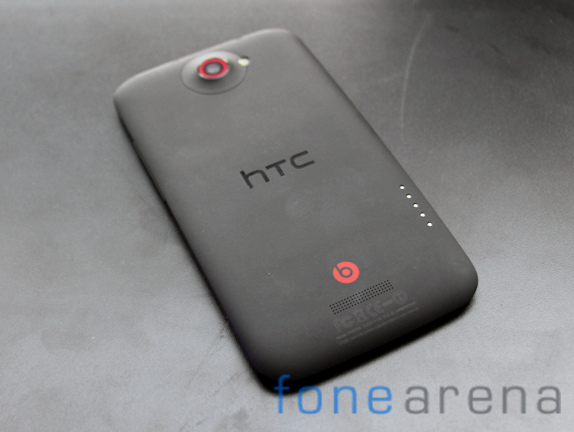 The rear of the handset has the 8MP camera module as expected. The camera is surrounded by a red ring keeping in line with the red highlights on the capacitive buttons. A beats logo is presented towards the lower half while charging points ensure compatibility with all existing docks. 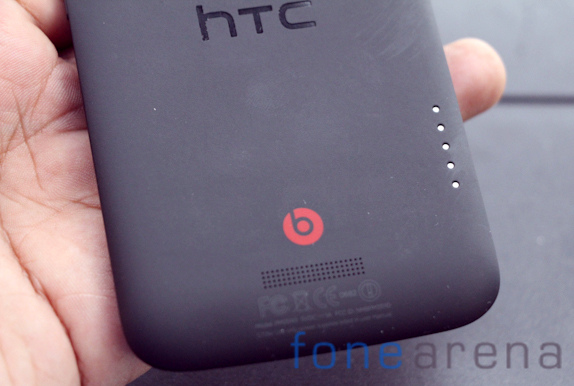 The speaker is located below the beats logo as mentioned earlier and is a marked improvement over the one on the One X. HTC has added a feedback amplifier to the handset to improve sound quality. This coupled with the beats software enhancements resulted in louder playback with much lower levels of distortion.

There are two parts to the software updates on the One X+.  The phone runs Android 4.1 Jellybean and has Sense 4.1 out of the box. The HTC One X will also be getting both these as software updates and as we reported earlier, the update is already live in India. So what’s new here then ? Read on below ! 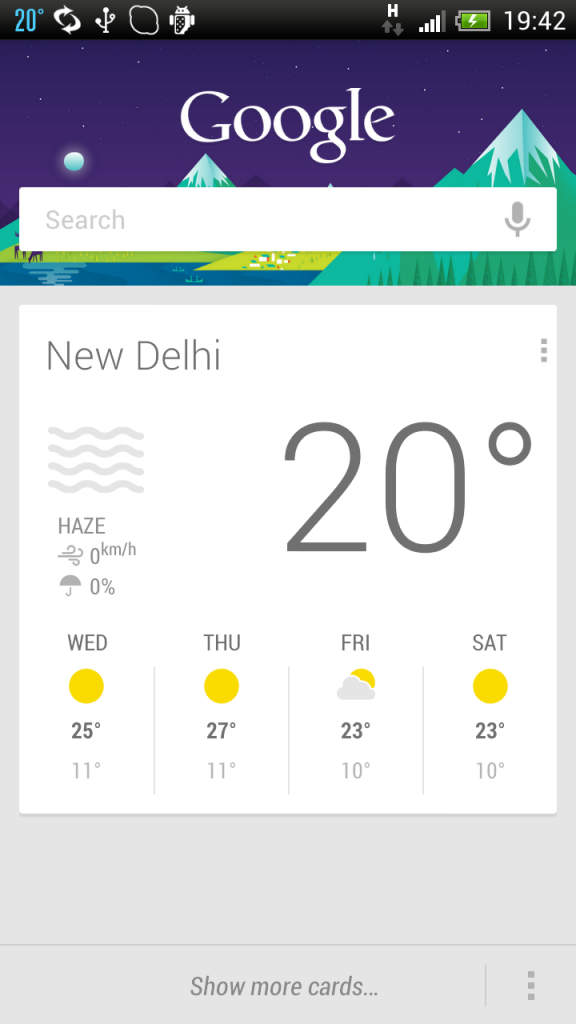 With Android Jelly Bean comes Google Now which is perhaps the biggest addition to the operating system. Pressing the menu / home screen button triggers the application which displays relevant information in a stack of cards. From the local weather to bus routes and time to get to the office. Google Now takes time to learn from your Gmail, Calendar data and usage habits but over time ends up being a very useful addition. 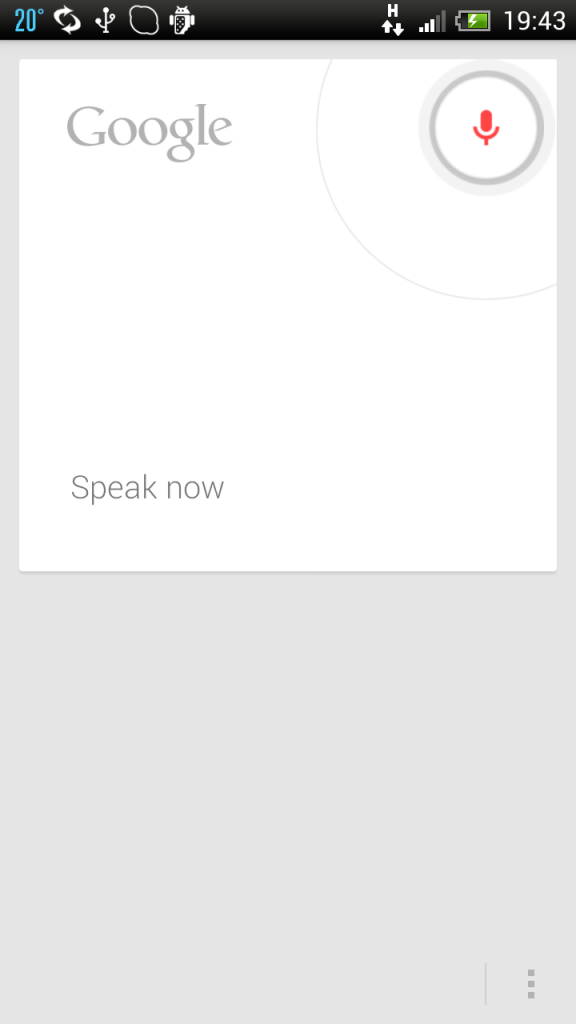 With Android Jelly Bean, You can now enable offline voice recognition. As part of Google Now it works not just for searching on Google but also for creating notes, setting up alarms, playing local music and more. Voice recognition can of course also be used to enter text and no longer do you need to be connected to the internet. Android Jelly Bean also added Project Butter to the operating system which is supposed to make Android even faster. That said, HTC’s Sense UI is already plenty fast. You can notice slight speed bumps if you look for it. The pull down notification menu does feel a bit smoother. 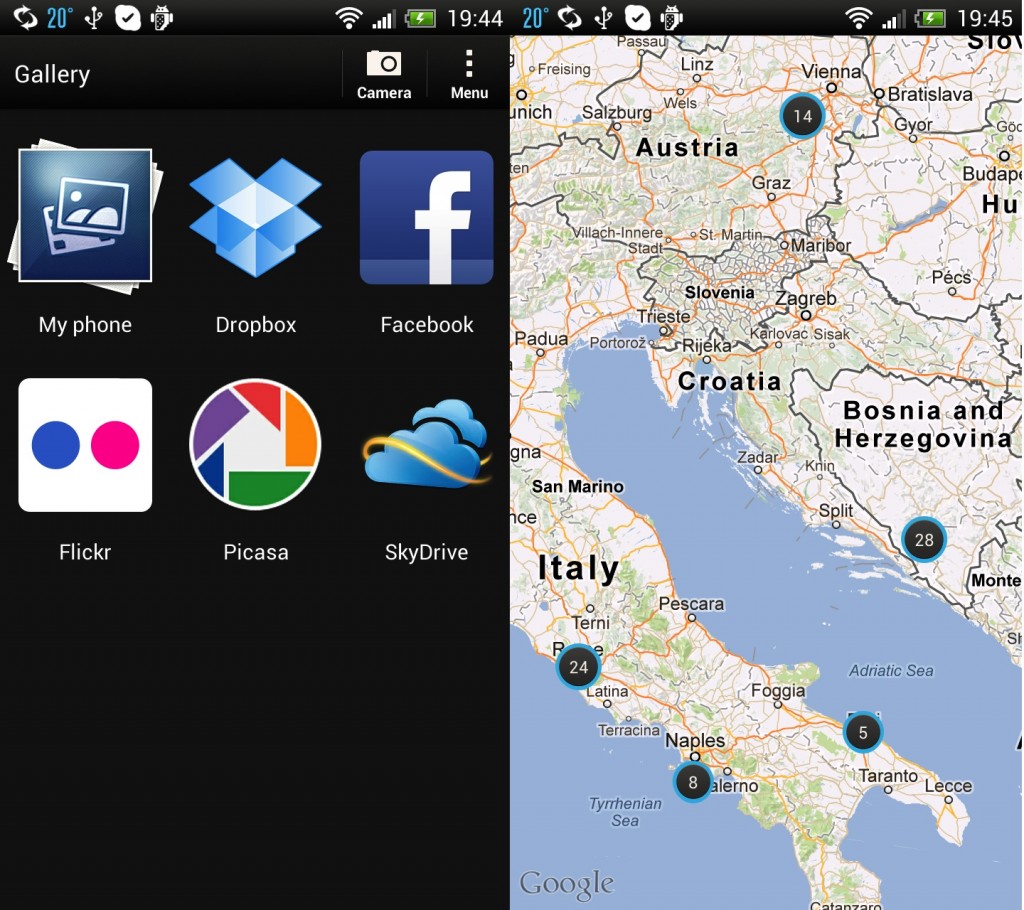 The HTC Gallery app has been updated with Sense 4+ and brings all your cloud based photo albums in one single location. New in Sense+ is that you can also view your photographs by location on a map which is pretty handy if you’ve been traveling around the world. 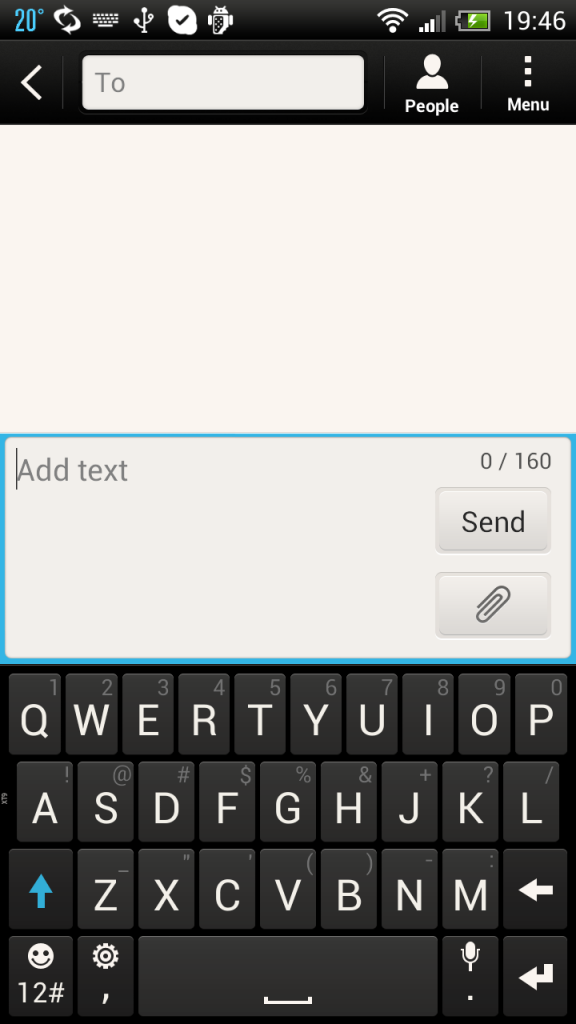 Other Sense additions not necessarily new to the One X+ include HTC’s keyboard which isn’t particularly great. We’d recommend switching it out for something like Swiftkey or Swype depending on your preference. There’s also the Music app which aggregates all your music apps and services under one menu.The phone also has the Beats audio option which boosts equalizer settings across the range and increases the volume levels  a bit. Audiophiles might want to keep this one switched off. While Sense 4.1 doesn’t bring much in the name of new features it does add a lot of polish to what  was already one of our preferred skins. Check out our HTC One X review to read more about Sense UI.

Most of the changes on the HTC One X+ are on the inside. The storage on the phone has been bumped up to 64GB of which about 56GB is available to the end user. Powering the phone is Nvidia’s Tegra 3 AP37 chip which is clocked at a maximum of 1.7Ghz. The GPU too is clocked higher at 520Mhz compared to the 416Mhz chip on the One X. That said, performance gap between the One X and One X+ with Jellybean was minimal at best. You’ll notice that everything loads up about half a second faster. 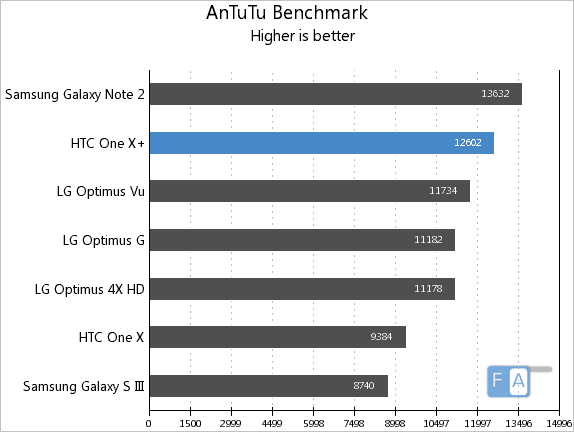 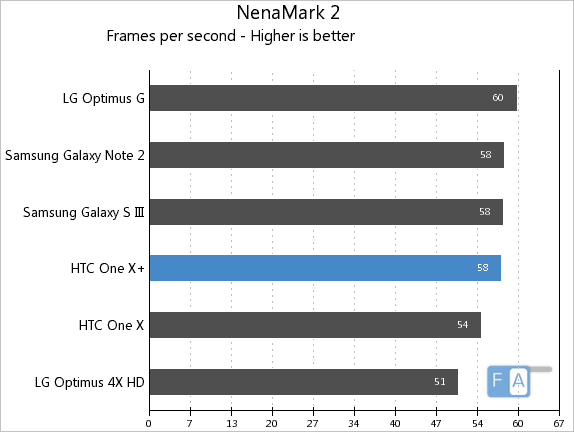 However it is GPU performance where Tegra 3 processor is comparatively slower. As can be seen with the Nenamark benchmark, Snapdragon S4 based phones like the LG Optimus G score a bit higher. 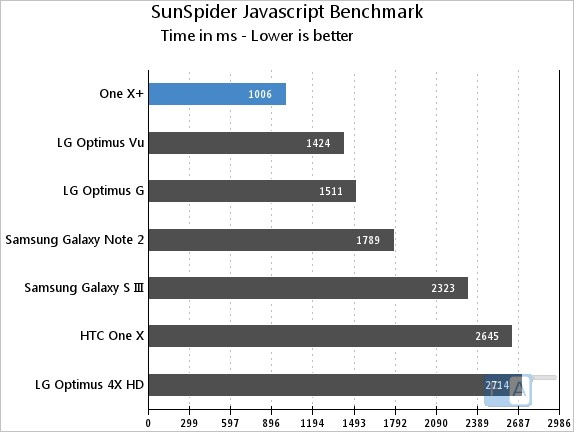 Javascript rendering on the One X+ is top notch. With a Sunspider score of 1006ms, the phone is much faster than competitors like the Optimus G. It is also over 2 times faster the HTC One X . Overall web browsing performance is great and its not something you’ll need to worry about.

The improvements in battery life on the One X+ comes down to two changes over the One X. Its a shame that HTC decided to continue using the Tegra 3 chip with its 40nm architecture over more efficient chips like the 28nm Snapdragon S4 chip. 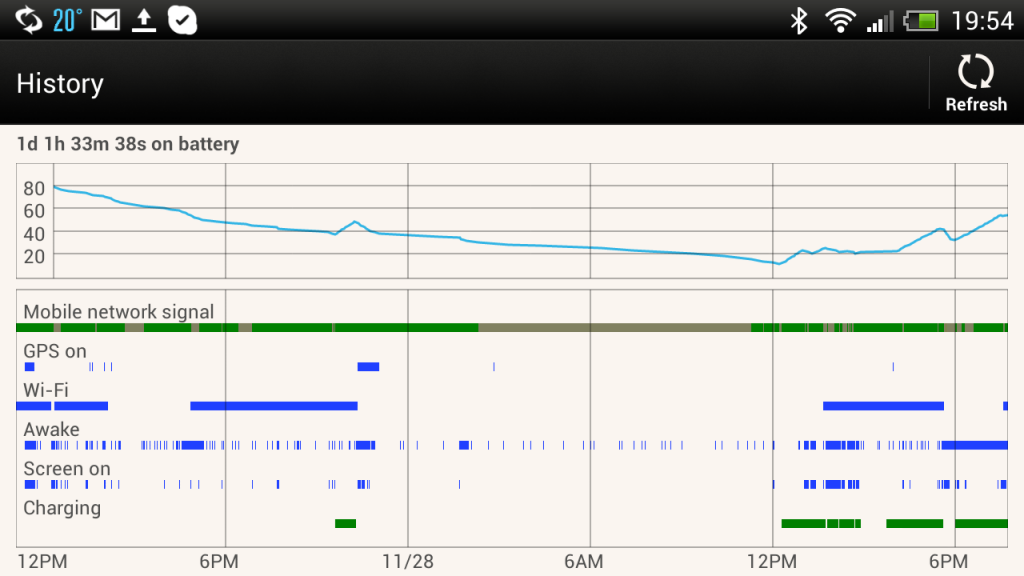 Standby time on the One X+ is generally very good with the phone lasting well over a work day with casual usage. We were able to playback video for almost 8 hours on a loop which is below competitors powered by the S4 processor. Heavy gaming too takes a toll on the battery life but for average usage, you’ll be just fine with the HTC One X+.

The camera on the One X+ is exactly the same as the One X and takes decent photos as long as the lighting is good. 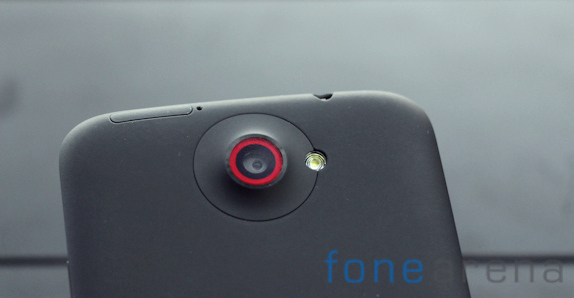 Low light images suffer as is the case with most smartphones. 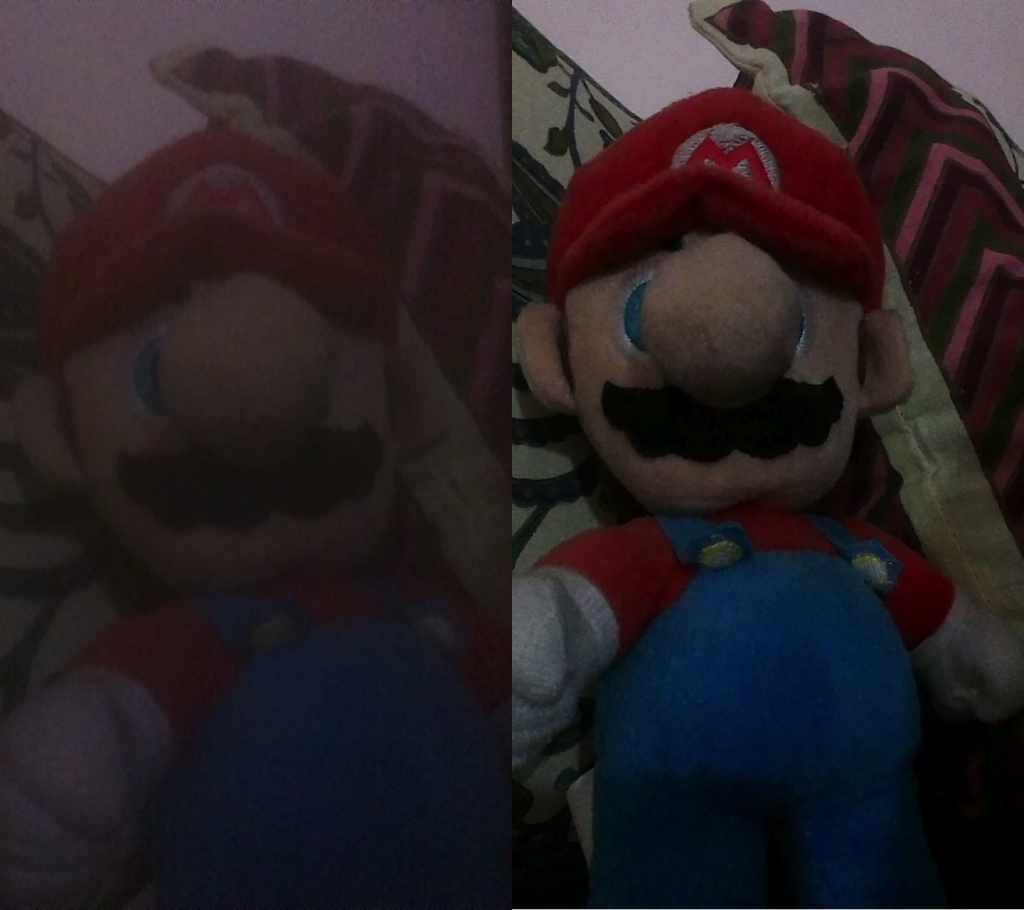 What’s changed here is the front camera which is now a wide angle unit and provides much better photos. The difference in clarity between the front facing camera on the One X and One X+ is night and day as can be seen in the photo above. That’s the original One X on the left and the One X+ on the right. The performance of the rear camera has not changed from the original One X  so you might want to go check out our One X review for more samples.

The One X+ improves on practically all aspects of the smartphone and is a serious contender for one of our favorite handsets of 2012. The screen is still one of the most beautiful ones out there and the design is exceptional. The bumped up processor gives a nice boost to the performance with the CPU being particularly snappy. 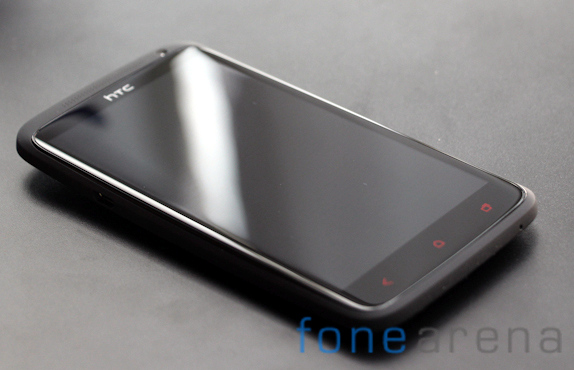 The storage bump to 64GB should also satisfy all the heavy downloaders out there. Battery life is a bit of a concern and we really do wish that HTC had chosen Qualcomm’s Snapdragon S4 chipset to power the handset over the relatively power hungry Tegra 3. Is there enough here to warrant an upgrade from the HTC One X ? Probably not unless you really need the extra storage. The HTC One X+ is available for about Rs. 40,000 in India.