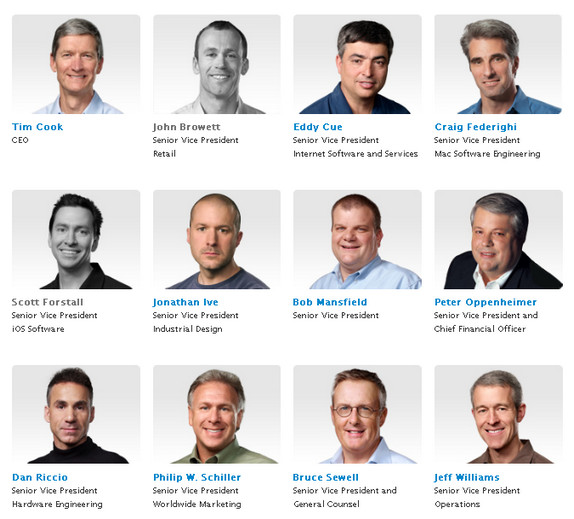 In a huge management rejig today , Apple announced a lot of changes to the company leadership. Long time Apple employee Scott Forstall who is SVP of iOS  software is leaving Apple after 15 years next year and will be an advisor to CEO Tim Cook in the interim period. John Browett SVP of Retail is also leaving the company after barely 6 months.

Jony Ive who is one of main brains behind the awesomely crafted Apple hardware will lead Human Interface (HI) across the company in addition to his role as the leader of Industrial Design.Eddy Cue will  be responsible for Siri and Maps.Craig Federighi will lead both iOS and OS X.Bob Mansfield will lead a new Technologies group. Here is the official press release from Apple.

CUPERTINO, California—October 29, 2012—Apple® today announced executive management changes that will encourage even more collaboration between the Company’s world-class hardware, software and services teams. As part of these changes, Jony Ive, Bob Mansfield, Eddy Cue and Craig Federighi will add more responsibilities to their roles. Apple also announced that Scott Forstall will be leaving Apple next year and will serve as an advisor to CEO Tim Cook in the interim.

“We are in one of the most prolific periods of innovation and new products in Apple’s history,” said Tim Cook, Apple’s CEO. “The amazing products that we’ve introduced in September and October, iPhone 5, iOS 6, iPad mini, iPad, iMac, MacBook Pro, iPod touch, iPod nano and many of our applications, could only have been created at Apple and are the direct result of our relentless focus on tightly integrating world-class hardware, software and services.”

Jony Ive will provide leadership and direction for Human Interface (HI) across the company in addition to his role as the leader of Industrial Design. His incredible design aesthetic has been the driving force behind the look and feel of Apple’s products for more than a decade.

Eddy Cue will take on the additional responsibility of Siri® and Maps, placing all of our online services in one group. This organization has overseen major successes such as the iTunes Store®, the App Store℠, the iBookstore℠ and iCloud®. This group has an excellent track record of building and strengthening Apple’s online services to meet and exceed the high expectations of our customers.

Craig Federighi will lead both iOS and OS X®. Apple has the most advanced mobile and desktop operating systems, and this move brings together the OS teams to make it even easier to deliver the best technology and user experience innovations to both platforms.

Bob Mansfield will lead a new group, Technologies, which combines all of Apple’s wireless teams across the company in one organization, fostering innovation in this area at an even higher level. This organization will also include the semiconductor teams, who have ambitious plans for the future.

Additionally, John Browett is leaving Apple. A search for a new head of Retail is underway and in the interim, the Retail team will report directly to Tim Cook. Apple’s Retail organization has an incredibly strong network of leaders at the store and regional level who will continue the excellent work that has been done over the past decade to revolutionize retailing with unique, innovative services for customers.