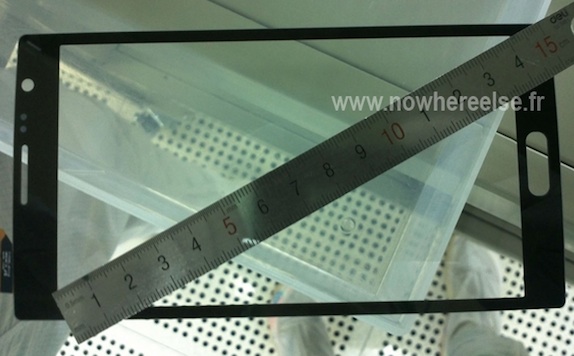 Samsung is going to hold a press conference in Berlin on August 29th, less than two weeks from today. Earlier this month a Samsung spokesperson told Retuers that the company is going to be announcing the second generation Galaxy Note there. Here’s what we “know” about the device so far from the rumors that have been floating around the internets: Similar to how the first generation Galaxy Note was basically a giant Galaxy S II, the Galaxy Note II is going to be a blown up version of Galaxy S III. The same quad core Exynos processor will be in there, likely the same 8 megapixel camera, the same cellular radios, you get the idea. The only thing that will change is, of course, the screen. What you’re looking at above is a photo of from the French website NowhereElse, who says that’s the front panel of the Note II. The first Note had a 5.3 inch display, but this new Note is expected to pack a larger 5.5 inch display.

Will the Note II be popular? It’s too early to tell since we don’t have any concrete information, but our gut tells us it’s going to be even more successful than the first Note. When Samsung announced the original Note back in September 2011, we didn’t really understand it. We asked ourselves who in their right mind would buy such a large device? But here we are, 10 months after the Note hit the market, and Samsung has managed to sell 10 million of them. That’s a million a month, which may not sound like a significant number, but it’s not small either.

And anyway, isn’t Android all about choice? If you want a tiny device, get a Sony Xperia Tipo or a Samsung Galaxy Pocket. If you want the biggest thing that you can barely squeeze inside a pocket, the Note is perfect.