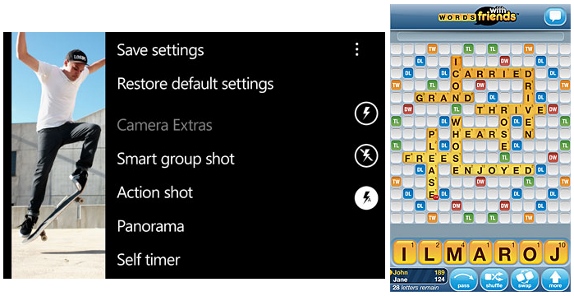 Nokia has announced new Nokia apps would be available for Nokia Lumia smartphones that would add new features and improvements. Nokia has also announced their partnership with Zynga to bring Words With Friends and Draw Something to Nokia Lumia Smartphones.

The Camera Extras app for the Lumia Smartphones would enhance the camera with new settings such as Smart Group Shot powered by Scalado that choose the best faces from a group of burst shots, Action shot lets you capture fast-moving object in one click with improved shooting speed, panorama shots and self timer.

The Contact Share app would now let you share your contacts with your friends via SMS or email. The Counters app would let you track your data usage that would alert you when you are about to reach the data limit.

The PlayTo app that was released as beta earlier this March would be available in the MarketPlace globally for Lumia phones by June 22nd. It enables you share your photos and videos from your Nokia Lumia phone to your DLNA-capable devices (TV’s, BlueRay players, Mediaplayer in Windows 7, etc…) over your Wi-Fi.

The Zynga games Words With Friends and Draw Something would be available in the Nokia Collection for a couple of months before releasing generally on Windows Phone Marketplace.