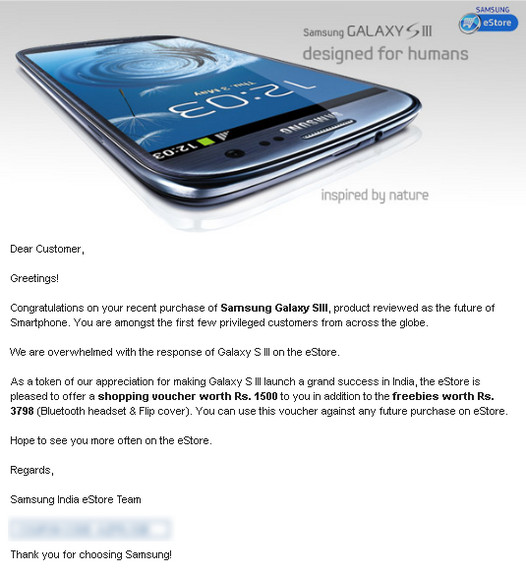 Samsung India launched the Galaxy S3 Smartphone in India at Rs.43180 and pre-order customers had to purchase it Rs.42500 which was a little higher than the market price of around Rs.38900.if you were one of the customers who had pre-ordered the Samsung Galaxy S3 on Samsung India’s eStore and purchased it , good news for you. Samsung has sent out mails to customers who had purchased the Galaxy S3 on the eStore with a coupon worth Rs.1500. the company says in the mail that they are “overwhelmed with the response of Galaxy S III on the eStore.”

Samsung has shipped a Bluetooth headset worth Rs.2299 along with the S3 for pre-order customers and has also promised to ship a Flipcover worth Rs.1500 separately. Now the new Rs.1500 worth coupon can be used to purchase any thing on the eStore. Although the bluetooth headset and the Flipcover are a tad over priced ,  early adopters will get stuff worth Rs.3799 and another Rs.1500 discount coupon which brings the effective price of the Galaxy S3 handset to Rs.37200 which is a nice discount from the Rs.38900 market price.

Thanks to an Anonymous reader for the tip !