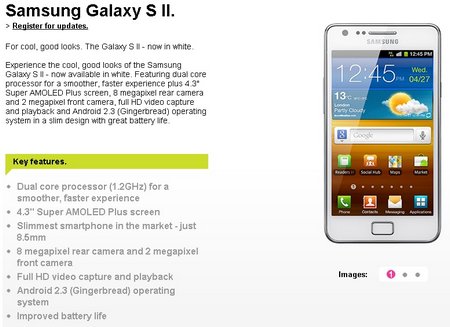 Samsung Galaxy S II is considered one of the best Android devices available in the market at the moment, we recently reviewed it and no doubt it’s a good device. At the moment, SGSII is available in only one color and it’s black, and black is one of the most common mobile phone colors. Well, if you live in UK and want to get SGSII but not in black color and want it in a unique color like white, then cheer up because it’s coming your way. Three UK is planning to launch the white SGSII in UK and they just added it in their Coming Soon list and they are launching it next month. It seems that this version will come with a better and improved battery life, that’s what the feature list on Three UK is telling us. Just like White iPhone 4 is sexier than black one, this White SGSII looks more sexy and beautiful than the current version of it. Three isn’t the only one to launch it because it seems that Vodafone is also impressed by this phone, as SoMobile is claiming that Vodafone will carry it, and they will also launch it in September, probably.

So our readers in UK, are you planning to get one in September or already got yourself a black SGSII?