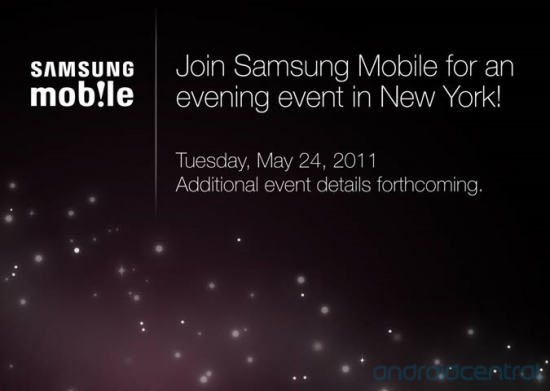 We recently told you that Samsung and AT&T are holding an event where they will announce something special. Now Samsung is sending invitation to bloggers again and this time, it’s only Samsung and it’s an evening event. No one knows what Samsung is going to announce, but if you ask me, then maybe I can make some guesses. As I told you that maybe Samsung will launch Nexus S or Galaxy S II with AT&T on May 5th, I think Samsung and AT&T will only launch Nexus S on May 5th. Then on May 24th, Samsung will officially announce Samsung Galaxy S II in USA, and I think they will announce it for all major US carriers. It’s also possible that Samsung would launch Galaxy Tab 10.1 in USA as the tablet recently passed FCC. It could be Galaxy S II because we recently saw it running on T-Mobile.

Well, I can only make some predictions, so stay tuned with us if you want to know more about it. So friends, what do you think Samsung is going to launch on May 24th, any guess?