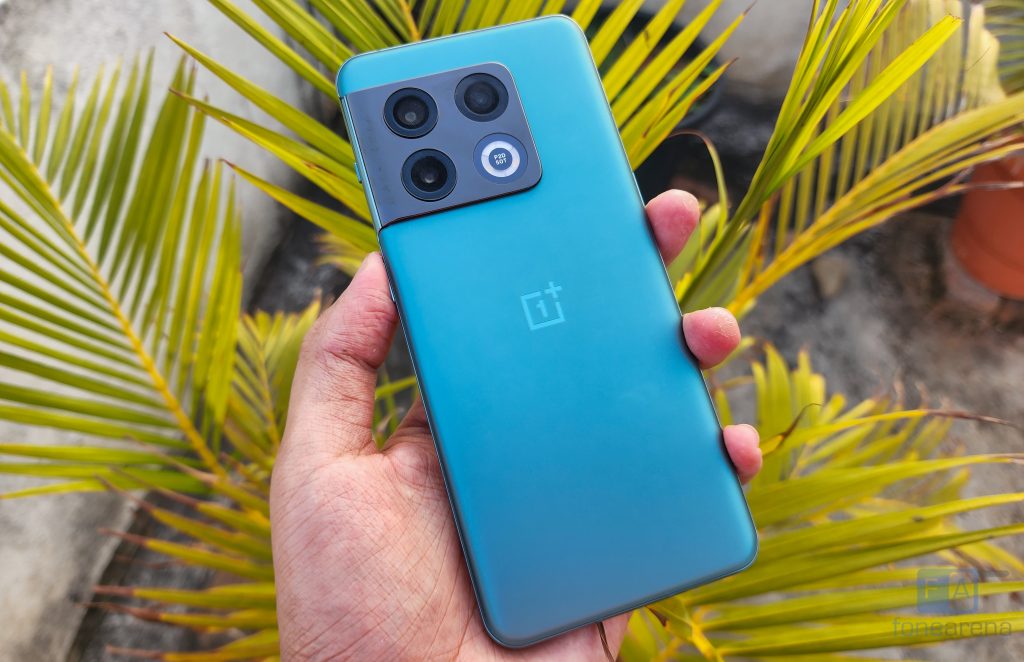 The OnePlus 10 Pro first launched in China back in January 2022, and then later launched in India at the tail end of March 2022. The phone is the latest flagship from the company, featuring upgraded internals like the Qualcomm Snapdragon 8 Gen 1 SoC and of course the 2nd generation Hasselblad-tuned cameras. It replaces last year’s OnePlus 9 Pro, but also costs more. Can OnePlus justify this price increase? Read on in my review to find out. 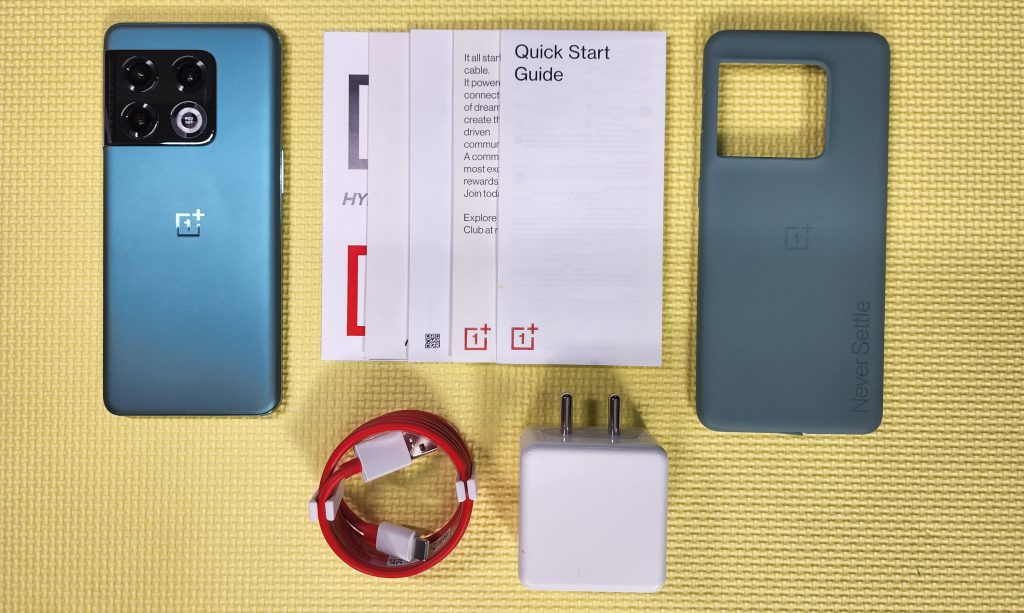 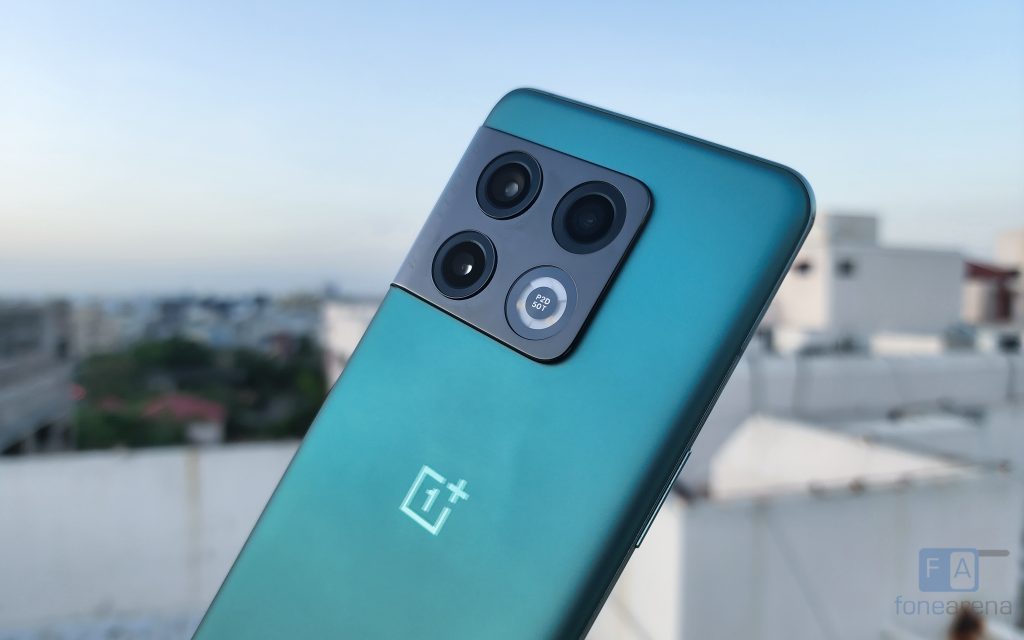 The design of the OnePlus 10 Pro has been updated from last year’s 9 Pro. The front is similar to the older model, with curved glass and a display with a punch-hole in the left corner. I prefer having the front camera in the center instead of being in the left corner, and OnePlus has done that for the 10R. I expect the next flagship phone from OnePlus will follow suit. 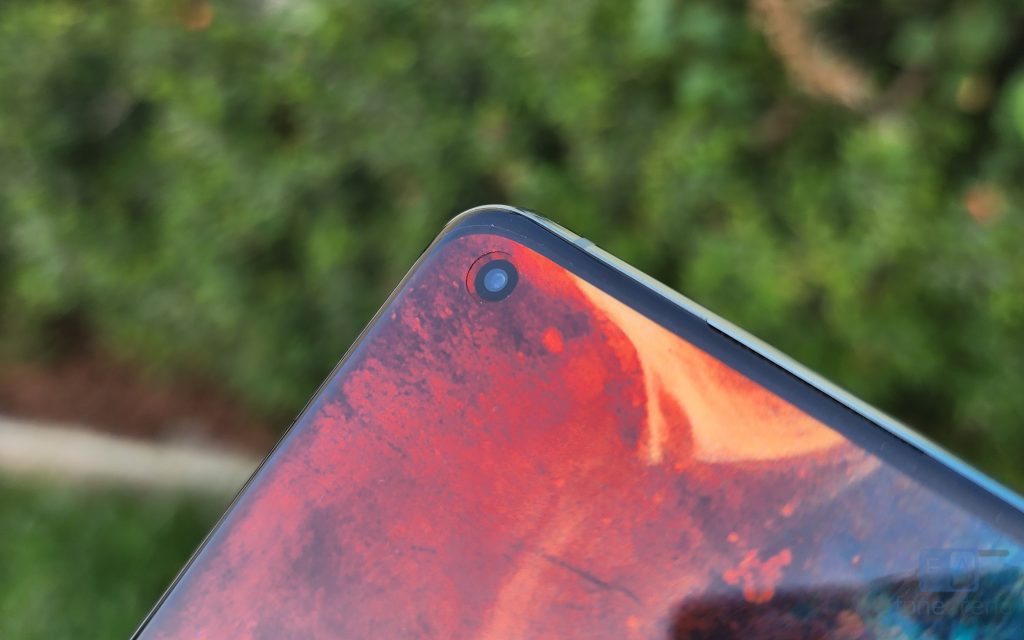 The rear camera bump in particular is more prominent and extends over to the side railings, similar to the style of the Samsung Galaxy S-series. It is made out of ceramic and has 4 rings inside it – three for camera sensors and one for the dual LED flash. The flash ring also has the text “P2D50T”, which supposedly stands for “Phone 2nd Generation Hasselblad mobile camera system 50 megapixel triple camera system”. I don’t know why that is the abbreviation, but that is what OnePlus has written. 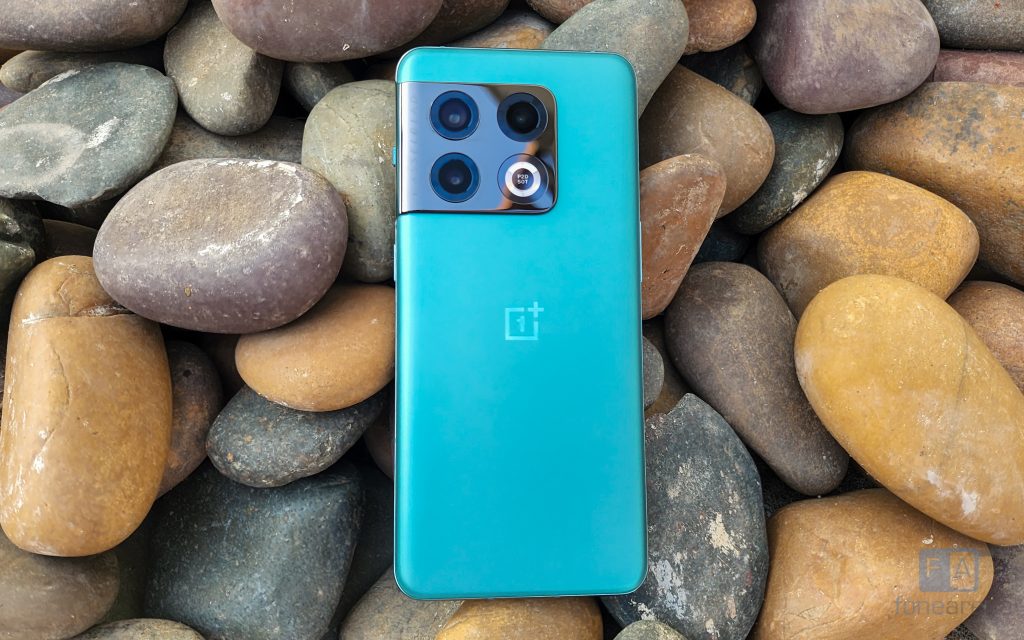 Our model, which is the Emerald Forest colour, has an anti-glare coating with a frosted glass finish. It does a good job of hiding fingerprints and feels premium to the touch. The rest of the design is mostly the same. It has a good size and feels dense with a good weight. The curved edges make it easier to hold the phone, and the railings are made out of metal. However, due to its glossy finish, they get covered in fingerprints quickly.

The alert slider continues to exist, and the button placements are the same as the 9 Pro – power button on the right and volume rocker on the left. The bottom edge has the speaker cutout, USB-C port and dual SIM slot. The absence of IP68 rating is disappointing, however. While it does have the rubber seals and all around the SIM slot, there is no official rating, and for the phone at this price, IP ratings should be standard. 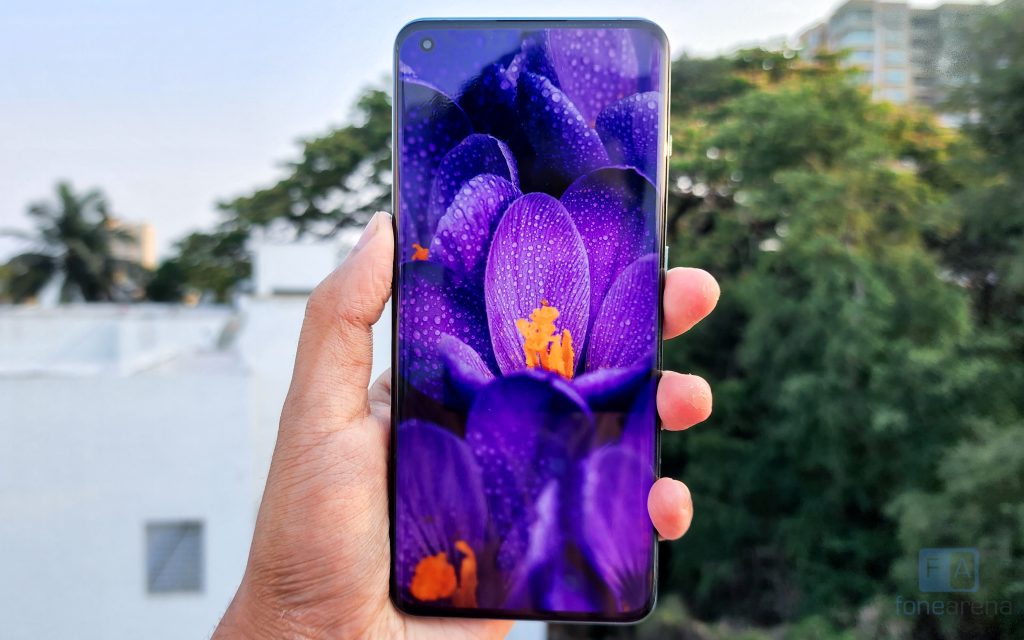 For the display, the 10 Pro has a 6.7-inch QHD+ Fluid AMOLED panel with a resolution of 3216 x 1440 and a maximum refresh rate of 120Hz. It is an LTPO 2.0 panel, which allows the refresh rate to be anywhere between 1-120Hz. It can reach a peak brightness of 1300 nits, which is great for HDR content and good for sunlight legibility.

Colours look natural and accurate, and it supports the Display P3 colour gamut. You can choose between Vivid mode, Natural mode and there is even a Pro Mode colour profile if you want. Animations are buttery smooth, thanks to the 120Hz refresh rate, and since it’s AMOLED, the contrast is excellent. As expected, there is support for an Always-on-display, and it offers a lot of customization options too. 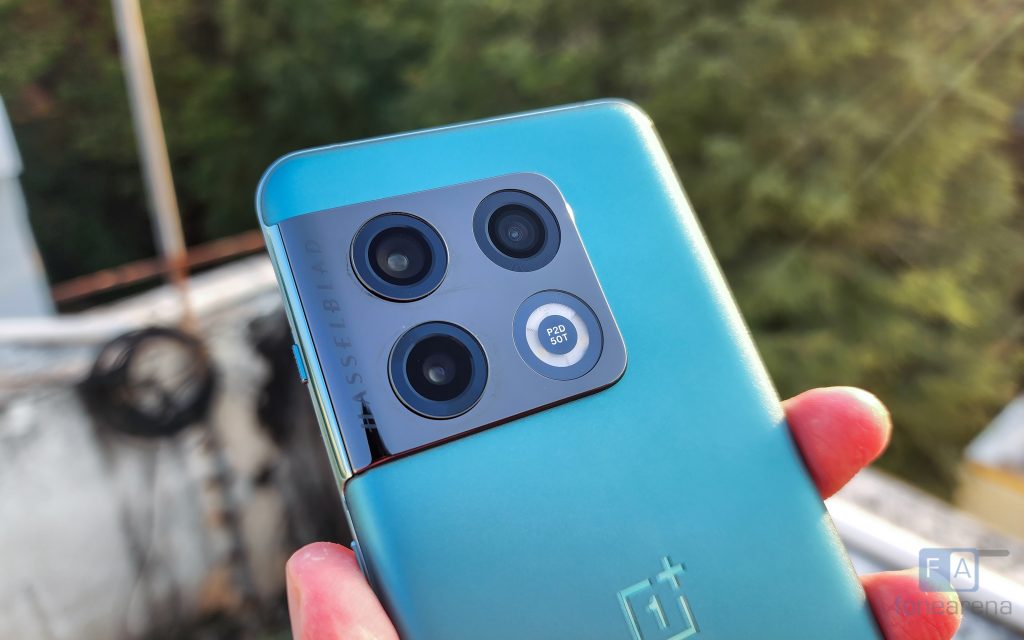 The OnePlus 10 Pro has the following rear camera specifications:

This is the 2nd year in OnePlus’ 3 year partnership with Hasselblad, and the OnePlus 10 Pro comes with the 2nd generation Hasselblad Pro Mode. It is now available on all three rear cameras, and it offers the ability to shoot photos in up to 12-bit RAW. The cameras also shoot using the DCI-P3 colour gamut, which is larger than the sRGB colour space. 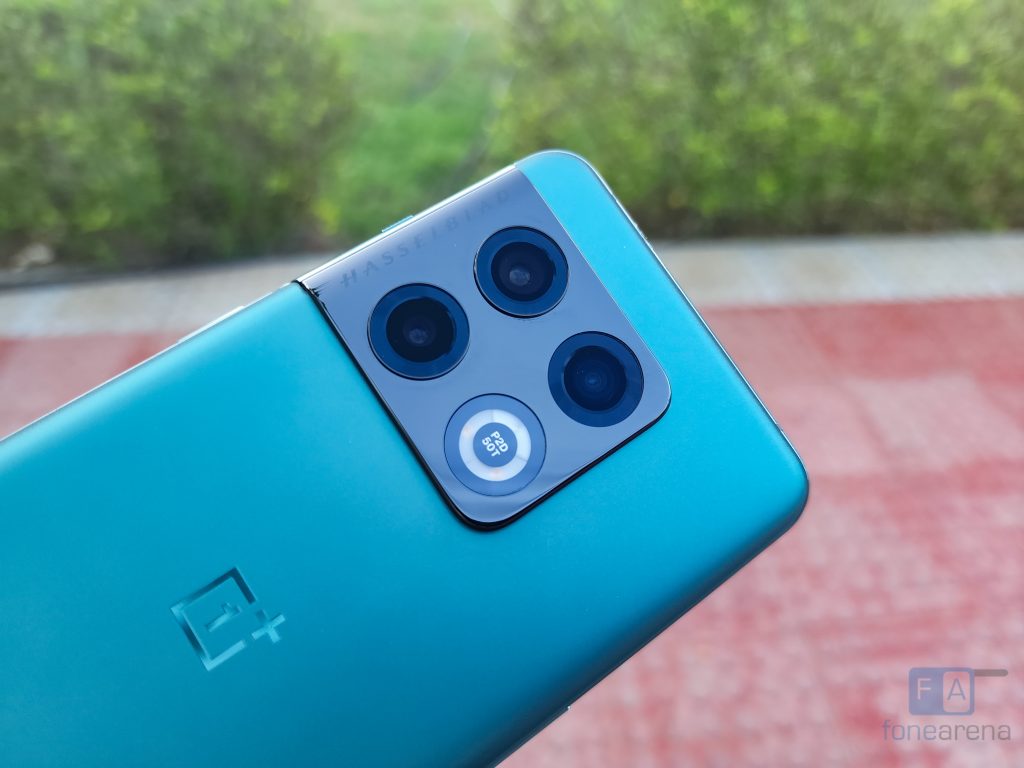 While the main camera is using the same sensor as last year, the ultra-wide sensor on the 10 Pro has been upgraded. It now shoots at 110° field of
view by default, and in a special mode it can shoot up to 150° field of
view, producing some fun shots. Coming to the 8MP telephoto camera, it has a zoom of 3.3x, and it has OIS just like the primary rear camera.

So how does the OnePlus 10 Pro’s camera perform? Pretty good, honestly. It is not quite at the level of the Samsung Galaxy S22 Ultra or the iPhone 13 Pro, but for a OnePlus phone, it is very good. In good lighting conditions, the photos look great with good dynamic range, low noise and natural colours. The auto HDR works well and the natural bokeh from the f/1.8 aperture main sensor is really nice. Night mode has been improved from last year, and it is more capable at producing impressive shots.

The ultra-wide sensor has been changed from the Sony IMX766 to a Samsung JN1 sensor. OnePlus is marketing this sensor as the widest-camera in the smartphone market – capable of an FoV of 150°. It even has a dedicated fish-eye mode, which can produce some really interesting shots. However, in my opinion, the regular shots from the ultra-wide sensor are not as good as last year’s OnePlus 9 Pro. The 3.3x telephoto is also good, and the front 32MP sensor produces some nice, pleasing photos.

Here are some sample shots from the OnePlus 10 Pro:

When it comes to video, the rear camera is capable of shooting at up to 4K/60fps or at 8K/24fps. The 10 Pro also supports recording at 4K/120fps, which is not available on the Samsung S22 series. The video quality is alright, with good sharpness and good dynamic range. The front camera on the other hand is limited to 1080p/30fps which is a bummer, considering that the S22 series offers 4K 30fps shooting from its front camera.

Check out some video samples below:

The 10 Pro is the first phone from OnePlus to run Android 12 out of the box, with their OxygenOS 12 skin on top.  Android 12 brings a number of updates such as improved microphone and camera access controls, better location access controls, privacy dashboard and better widgets.

OnePlus has also improved OxygenOS in its latest version on the 10 Pro. OnePlus Scout, which is their system-wide search feature, has now been integrated into OnePlus Shelf, and the new Work-Life Balance 2.0 feature allows users to toggle between two app notification profiles — called Work and Life. Dark Mode in OxygenOS 12 now comes in three modes — gentle, medium, and enhanced. There is a new Private Safe that acts as a virtual lockbox to store videos, documents, etc. which is secured with a password or fingerprint recognition. This feature is similar to the Secure Folder on Samsung’s OneUI 4.0, and I find it useful.

Upon setup, there are very few pre-installed apps, which include Netflix and YT Music. OxygenOS is known to have a clean UI and is supposed to provide a near-stock android experience, and this is mostly true for OxygenOS 12 too. While it does not lean heavily into the “Material You” design language that Google showcased with the Pixel 6 series, OxygenOS 12 still offers plenty of customization options. You can change the accent colour, the fingerprint animation, change the icon pack, and more. In terms of software updates, OnePlus has promised 3 years of Android updates and 4 years of security updates, which is good.

The OnePlus 10 Pro comes with an in-display fingerprint sensor that is positioned near the bottom of the display. You can add up to 5 fingerprints, and it can be used for screen unlocking, app unlock and for the Private Safe. The sensor is fast and accurate, and I faced no issues. The phone also supports Face unlock, however it is not as secure as fingerprint recognition, so I did not use it.

The default music player is YouTube Music. The phone supports Dolby Atmos, which can be customized based on Environment or Scenario-specific profiles. It has dual speakers, which get pretty loud and sound good too.

The phone does have Widevine L1 certification, which means Netflix and other streaming apps can playback HD content. It also supports HDR playback on Netflix and YouTube.

The SAR value was reported as 1.16W/kg for the Head and 0.70W/kg for the Body, which is well below the limits set by the Indian Government. 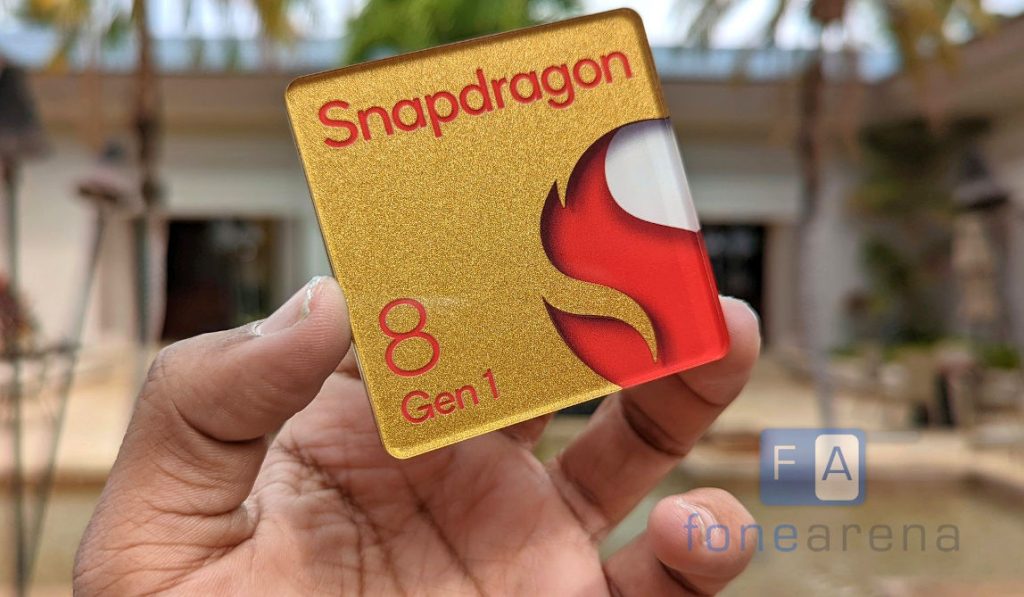 The 10 Pro is the first phone from OnePlus to be powered by Qualcomm’s flagship Snapdragon 8 Gen 1 chipset. It features a Kryo Prime Arm Cortex-X2-based CPU, three Kryo Performance A710-based CPUs and 4 Kryo Efficiency A510-based CPUs. For the GPU, it comes the Adreno 730, and the 5G chipset is the Qualcomm X65 modem. The phone is paired with 8GB or 12GB LPDDR5 memory and 128GB or 256GB of UFS 3.1 storage.

As expected from a flagship processor, the Snapdragon 8 Gen 1 SoC offers top-notch performance in the OnePlus 10 Pro. Apps open immediately, and I did not notice any stutters anywhere whatsoever. During regular use, the phone would stay cool, and during heavier workloads, the phone would get quite warm.

The Adreno 730 GPU is also a good upgrade when compared to the Adreno 660 GPU that was integrated in the Snapdragon 888. In games such as Call Of Duty and BGMI, I did not face any issues or notice any frame drops. For heavier titles such as Genshin Impact (Max settings), the FPS would hover around 45-55 fps, however the phone would get quite hot.

Here are some benchmarks of the OnePlus 10 Pro: 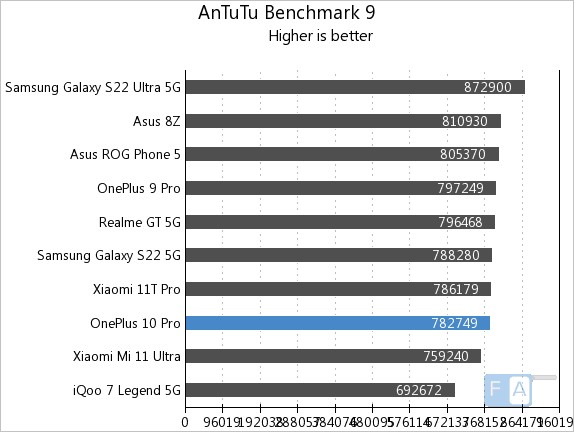 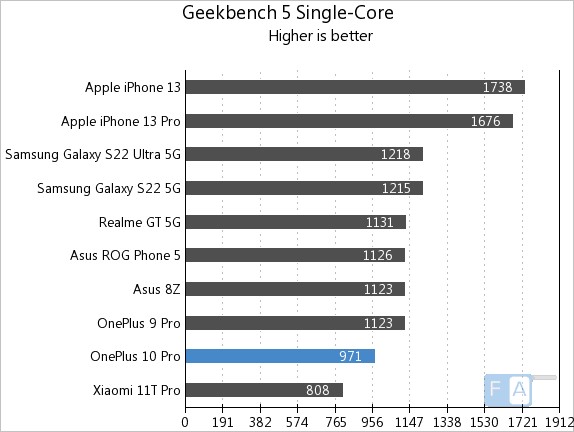 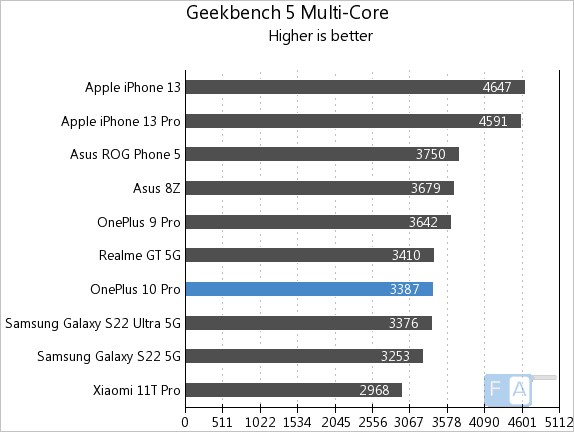 The battery capacity has been increased from 4500mAh to 5000mAh in the 10 Pro, which is a healthy upgrade. When using it regularly on Wi-Fi and 4G LTE, the phone could easily last a day with about 6.5 hours of screen on time with the screen set to 120Hz and at FHD+ resolution. With heavier use, it is possible to kill the battery in less than a day, so you might have to keep an eye on the battery when gaming or shooting 4K/8K videos.

Charging on OnePlus devices has always been a great experience, and the 10 Pro is no different. The maximum charging rate has been increased to 80W,  and OnePlus does include a SuperVOOC charger in the box, however there are a couple of drawbacks. For one, it does not use a Type-C port, and the adapter does not support USB-PD charging. Other than this, the charging experience is good. It can go from 0-60% in 16 mins and from 0-100% in about 33 mins. 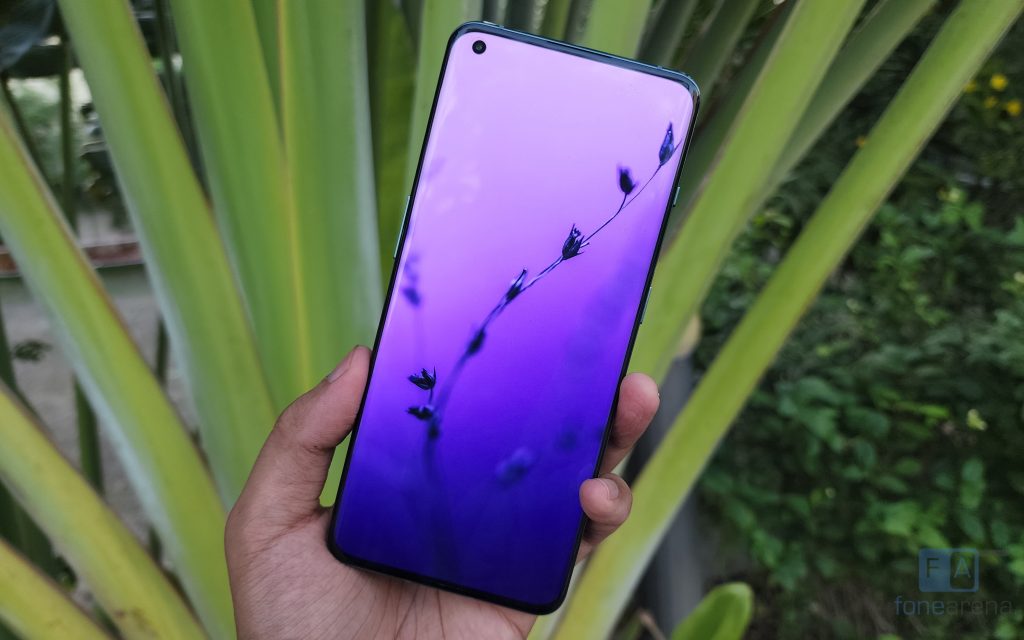 The OnePlus 10 Pro is a solid flagship smartphone with little-to-no compromises on the build, performance, display and battery. The camera is comparable to the competition from Samsung and Apple, and it runs Android 12 out-of-the-box with 3 years of promised software updates.

At a starting price of Rs. 66,999, it is Rs. 2000 more than last year’s OnePlus 9 Pro. OnePlus has made a couple of notable improvements, but at the same time also removed features such as IP68 water and dust resistance and a USB-PD charger.

If you like being part of the OnePlus ecosystem, and you enjoy using OxygenOS, the OnePlus 10 Pro is a great flagship device that should serve you well for a couple of years. As alternatives, I would recommend looking at the Samsung Galaxy S22, the Realme GT 2 Pro or the Xiaomi 12 Pro. If you are looking for an alternative from Apple, then I would suggest looking at the iPhone 12, or even the iPhone 13 mini if you are willing to spend more money.