Here’s the FoneArena Nokia E5 review – a QWERTY phone which has been launched in the market recently and is Nokia’s latest Eseries device after the E72. Nokia E5 is one such phone which packs some great hardware with trusty OS. It packs a good enough 600MHz processor with 256MB RAM, powered by stable and well proven Symbian S60 3rd edition OS. I said business oriented phones right? Yes, I did and there was a time when E-series phones were just for the Business Class, with phones like E71, E63, E72 the trend changed! Even the normal users, heavy texters, social networking addicts liked the form factor. So will E5 find its place there? Yes, it is a low cost qwerty  phone that offers most features what one would ask for. Read on to find out more about the E5. 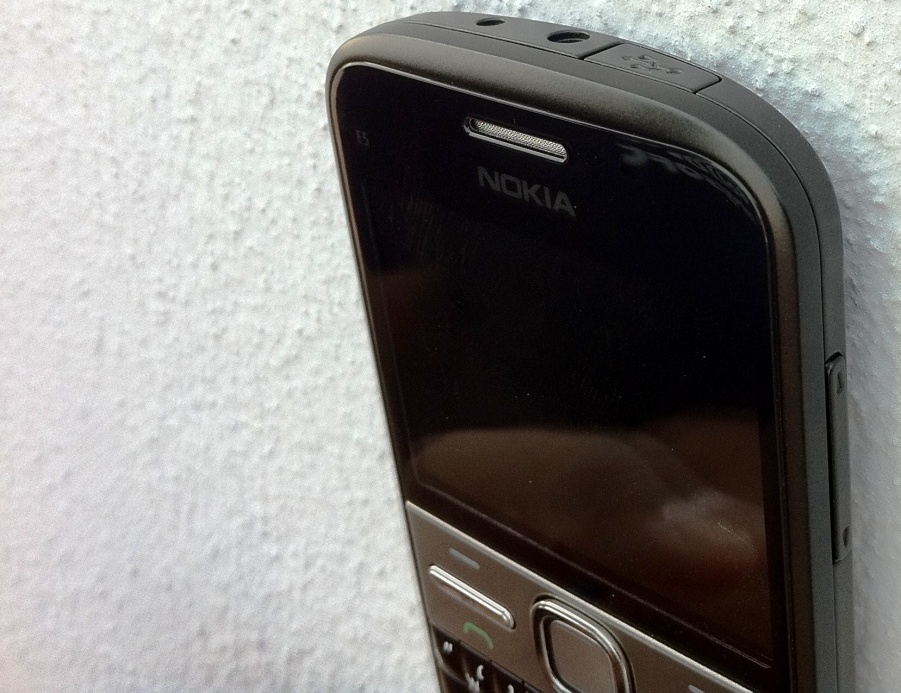 The Nokia E5 comes in a typical blue rectangular box. The package contents include: The Nokia E5 has slight resemblance to any of its ancestors, its different and its a a bit ugly. Some may think its cute, some may just accept the way it is. But i don’t find the phone attractive. But E5 is brilliantly designed, those curved edges feel comfortable to hold, while making it easier for trouble free texting or while providing any other input. The device feels solid, though most of it is purely made up of plastic. It weighs around 126grams. Comes in 5 colors – Carbon Black, Sky Blue, Silver Grey, Copper Brown and chalk white.

You can find the Screen, Ambient light sensor on top right, Qwerty keypad, four way D-pad.  Also Call and End/Power button, two short-cut keys (home and messaging) on the front. And a uncomfortable volume rocker. It has a 3.5mm audio jack on the top accompanied by a microUSB port (data transfer and charging) on the left spine. There is a 5MP Fixed Focus camera at the back of the device. Below the battery are two trays, one for the SIM card and the other for microSDHC card. Yes, not hotswappable. 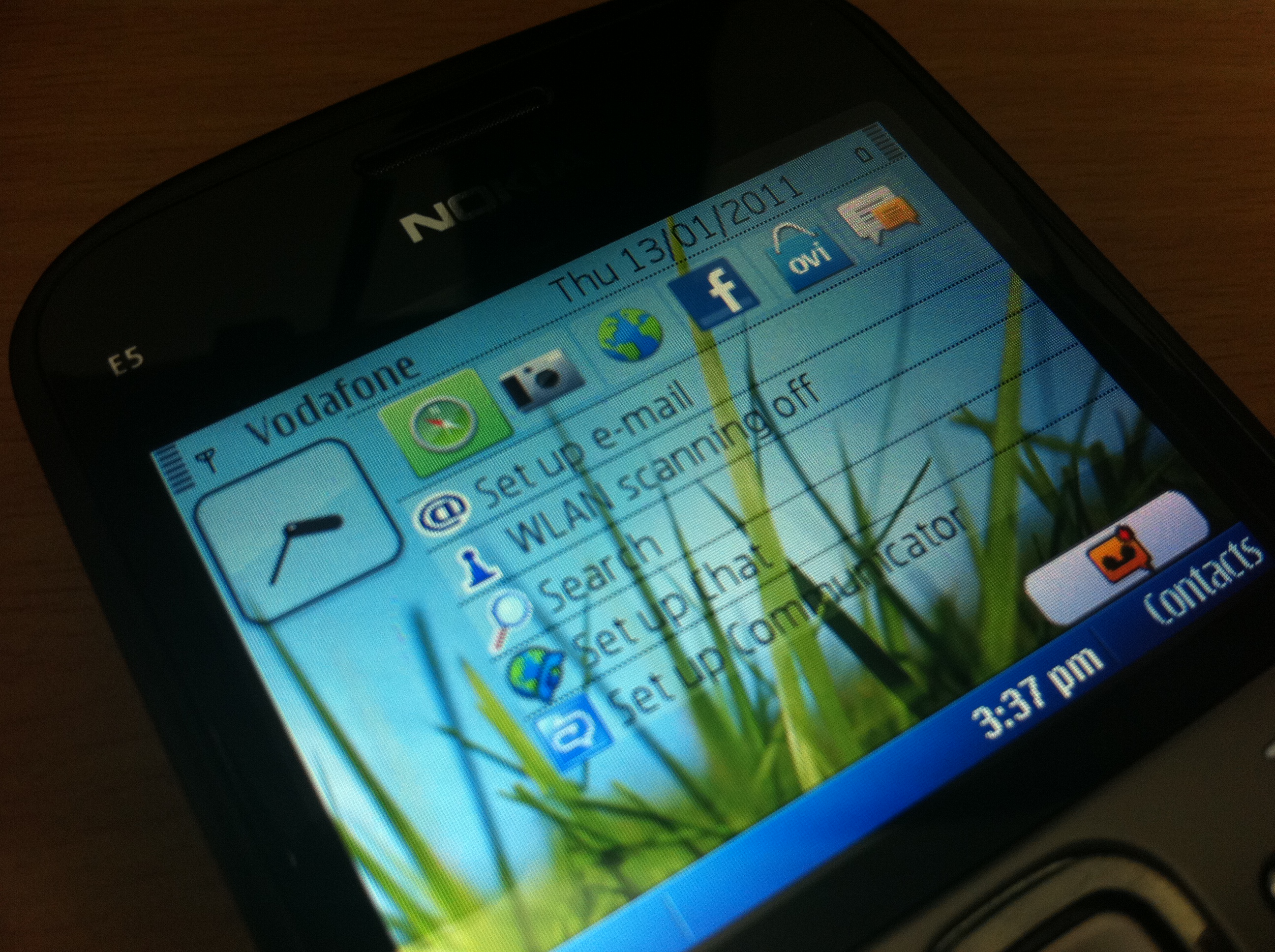 Customization is the key and Symbian 60 3rd edition . The phone has a single homescreen, number of homescreen themes and two totally different easy switch modes such as Business and Personal. And this doesn’t end here.

There’s more about E5’s home screen, and that’s the theme customization. There’s around 6 different home screen customization. And Talking theme is an advantage there. Also there’s around 8 pre-installed phone themes (with theme effect on/off feature), and you can always install more according to your taste.

And Surprisingly, Quickoffice is a fully fuctional one, in other words – This low end E-series device comes with the full version of Quick Office (Remember Nokia N8, even E72  have only the read only versions).

IM, Email client, Messaging feature has seen some improvements. The much wanted Smiley’s support has been adopted to this particular E-series device. Also the device supports HTML email. Value for Money. True, with this low cost phone you get most of all connectivity features like Bluetooth with A2DP and USB v2.0, 3G (HSDPA, HSUPA), Wi-Fi 802.11 b/g, and GPRS, EDGE. Also, the E5’s web browser is smooth. Best ever of all the S60 3rd edition phones, this is where RAM comes into picture. It also supports full HTML and as well as WAP 2.0. The web browser supports Flash lite v3.1 and RSS reader.

E5 Come’s with Facebook client with contact sync (refer fb contact sync that we detailed earlier) fantastic facebook integration with phone, no dedicated twitter app (Gravity for the rescue), Myspace, hi5 and Friendster, but just a frigging bookmark of their mobile site only.

The phone features a 5MP EDoF camera with flash, which is not mediocre according to me. The camera is fast, which simply means no waiting for a photo to come into focus. The interface is very snappy. The Nokia E5 even offers some of the best camera features such as self-timer, panorama mode and burst mode.

So are we happy with the camera of the device?

Yes, except for the close-ups (reason for incapability of macro shots is the absence of AF camera) while the Nokia E5 performs really well in most given light conditions, both outdoor and indoor especially with objects over a meter and a half away with great detailing.

Take a look at some of the pictures that were taken with the E5 and decide for yourself how they turned out. Video Camera records videos at 15fps with options varying between 320×240 and 640×480 in MP4 format. Nothing outstanding there.

Nokia E5’s Music player is simply powerful. It plays MP3, AAC, AAC+, eAAC+ and WMA files. You can download and listen to podcast from the music player itself. It also has 6 preloaded EQ modes, and also has option to include custom EQ. The phone features an FM radio as well. The volume rockr is undoubtedly one of the worst i have ever seen on a mobile phone, its stiff and is painful to use. Best of all feature is the music output, which is superior. The headphones that comes with the phone is mediocre, since the phone has a 3.5mm audio jack, you can plug in any high quality headphones to enjoy the music like never before.

The N-series styled image gallery is cool. Shows items according to month of capture, album in which it is tagged to, and downloaded images, all these listed inside the gallery. Which is pretty neat and organised.

If you’re a techie  person you’ll love the fact that the phone having a 600MHz processor with a huge RAM of 256MB, while the E72 struggles with just 128MB. Which makes it clear that phone run’s smooth, snappy like never before.

And yes, this is the phone that created multitasking record by running 74 apps at a stretch.

The call quality was excellent from what i have used. The mono speakers at the back is loud enough. Haven’t faced any issues in those departments except for 3G reception, which is simply not satisfactory. If there’s one unique feature about Nokia phones, that is the battery life. This phone is no less, with heavy usage of WiFi, MP3, PUSH Email it’ll easily live for around a day and half.

I’d recommend the Nokia E5 for those who’d love to try a smartphone with qwerty keypad, who’s usage demands a phone which can handle E-mail well, SNS addicts who are looking for a value for money product with no compromise on features. Though I think the E5 is not designed for perfection, the target audience for the phone might love the factor of the phone. Though i hate the E5’s low screen resolution and lower number of  colors, I still think it’s worth the buy. Nothing extraordinary, yet nothing really lacking. I can’t find any worthy QWERTY alternatives to this phone at the given price and features. But do check out Blackberry Curve 8520.