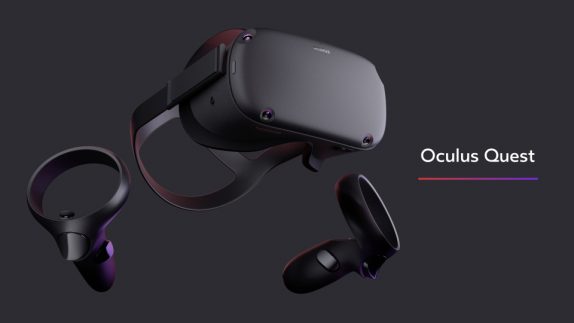 Oculus today has announced its new headset; the Oculus Quest which is its first all-in-one VR gaming system. It offers six degrees of freedom and Touch controllers. The company has lined up around 50 titles for launch including games like Robo Recall, The Climb, and Moss. It also unveiled the Oculus Insight that powers inside-out tracking, Guardian, and Touch controller tracking.

The Oculus Insight uses four ultra wide-angle sensors and computer vision algorithms to track your exact position in real time without any external sensors. As for the Oculus Quest, it comes with Oculus Go display with 1600×1440 per eye, incorporating a lens spacing adjustment to help maximize visual comfort, improved built-in audio.

It has an “arena-scale” tracking that supports at least 4,000 square feet of space. Its controllers have the same button layout as the Rift’s Touch controllers, but with the half-moon, tracking ring reversed. The Oculus Quest is priced starting at $399 (Rs. 28,985 approx.) for a 64GB headset and will be available in Spring 2019.

The Oculus mobile app now supports Rift where you can discover events, connect with friends, and browse the store right from your phone. You can even buy and remote install games to your PC on the go. The updated Oculus mobile app is available starting today on iOS and Android.

The Core 2.0- Rift’s updated system software is out of beta and is rolling out to the Public Test Channel today and to the entire Rift community in early October. The new system interface, Dash, brings your apps and PC display. It is also making the expressive Avatars available to all developers via the Avatar SDK later this year.

with Oculus Quest, we will complete our first generation of Oculus products. It combines the key attributes of the ideal VR system— a wireless design, virtual hand controllers, and full positional tracking. “If we can bring these three qualities together in one product, we think that will be the foundation of a new generation of VR.