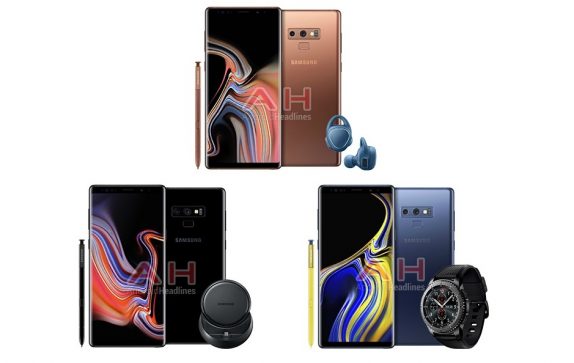 Samsung’s Galaxy Note 9 event is scheduled to take on August 9th. Alongside the Note 9, the company is also expected to introduce various other products including Galaxy Watch, a Wireless Charger Duo. In a fresh dose of leaks, we are hearing that the flagship will come in a 512GB variant and the base model is now a 128GB version up from 64GB.

Though we have seen multiple live images and renders, we haven’t had a very clear view of the front of the device. Filling the void, we now an official press render of the Galaxy Note 9 along with the improved S-pen in various colors. More or less the design of the phone resembles the Galaxy Note 8 except for the fingerprint sensor which is now present below the rear camera module. Along the Note 9, we can also see the Gear S3 smartwatch, the Gear IconX earbuds, and the fast charge wireless charging stand which already are available in the market.

It is unclear if Samsung would give these accessories as free add-ons along with the flagship or whether they will be sold as bundled packages. While the image doesn’t bring any new information, it reconfirms the already existing piece of information. As for the specifications, the Samsung Galaxy Note 9 will be powered by the Qualcomm Snapdragon 845, and another variant with Exynos depending on the region. It is expected to pack 6GB of RAM with base 128GB storage. It is expected to pack a 4000mAh battery and it also confirmed by the telecom agency.