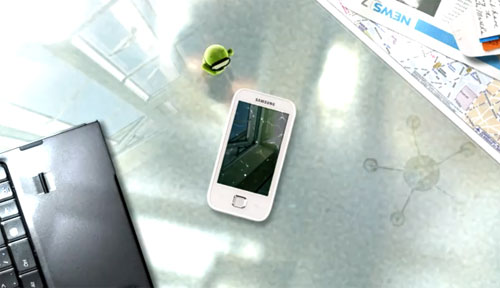 Apple iPod is the most popular device of all music listeners, and the best portable gaming device after Nintendo DSi. iPod Touch is the most unique and the best iPod, and currently there is no device in the market which can beat the Apple iPod, but now there is. What do you think about an iPod Touch with Android OS? Sounds good, right? Samsung is adding a new device into their Galaxy S line, and it’s known as the Samsung Galaxy Player 50. Galaxy Player is Android powered. Well, as we know that Samsung is a known to take on Apple products with its own. They launched the Galaxy S smartphone line to take on the Apple iPhone, and Galaxy Tab to compete with iPad, and now the Galaxy Player. Probably, the Galaxy Player is going to hit France first in few months, and US residents will see the iPod rival in 2011.

Samsung Galaxy Player is kinda mid-end version of Galaxy S, and it features a 3.2 inch screen, Android 2.1, 2-megapixel camera with camcorder, Wi-Fi, DLNA, 8GB or 16GB of internal memory, a microSD card slot, support for GPS, DivX and FM Radio. You also have access to more than 80,000+ apps in the Android Market and Google service (Youtube, Gmail, Google Maps etc). Well in my opinion, Galaxy Playeris  worth a try, just like the Galaxy S. I am sure that the Galaxy Player is going to give Apple iPod touch a hard time, so be ready Apple. What are your thoughts about the Galaxy Player, is it powerful enough to beat iPod? Check out the video after the break if you want to check out the new Galaxy Player: