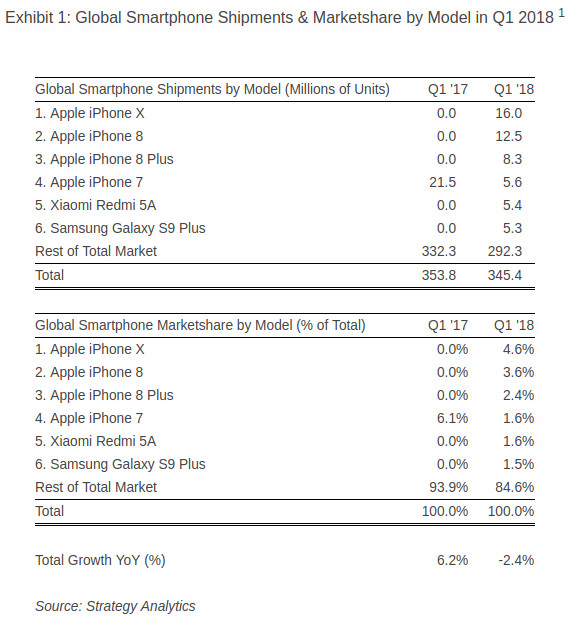 As for the Android side of things, the Xiaomi Redmi 5A and Samsung Galaxy S9 Plus retained the world’s top-selling Android smartphone models position. The top-six most popular models together accounted for 1 in 7 of all smartphones shipped worldwide during the quarter. The Xiaomi Redmi 5A shipped 5.4 million units and grabbed the fifth place and accounted for 2% market share worldwide in Q1 2018.

A good 5.3 million Samsung Galaxy S9 Plus units were shipped in Q1 2018 and restricted its place to sixth place and accounted for 2% market share worldwide in Q1 2018. Samsung’s flagships started shipping towards the end of the Q1 and yet it grabbed the top spot. There is also a possibility that S9 Plus might become the best-selling Android smartphone globally in the second quarter of 2018.

We estimate the Apple iPhone X shipped 16.0 million units and captured 5 percent market share worldwide in Q1 2018. For the second quarter running, the iPhone X remains the world’s most popular smartphone model overall, due to a blend of good design, sophisticated camera, extensive apps, and widespread retail presence for the device. Apple has now shifted almost 50 million iPhone X units worldwide since commercial launch in November 2017. The Apple iPhone 8 and iPhone 8 Plus shipped 12.5 and 8.3 million units, respectively, for a second and third place. The previous-generation iPhone 7 shipped a respectable 5.6 million units for fourth place. Combined together, Apple today accounts for four of the world’s six most popular smartphone models.