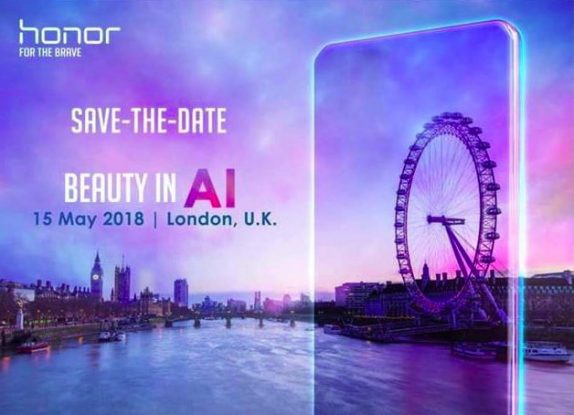 Honor just sent out media invites for an event on May 15th in London and from the teaser image it is evident that the company is launching a smartphone and it is expected to be Honor 10. It looks like the company is again focusing on A.I which is evident from ‘Beauty in AI’ caption.

Following the trend of launching its Honor flagships around this time of the year, the company is expected to introduce the Honor 10 and it will be powered by the same chipset that is powering the Honor View 10; the Kirin 970 64-bit octa-core processor. The Honor 10 will also pack slim bezel-less design with a 5.7-inches display and is expected to run on Android 8.1 Oreo with EMUI 8.1 on top with improved A.I features and enhancements.

Just like the Huawei P20 series, the Honor 10 is expected to come with a top-notch. It will have dual-rear cameras and a front-facing fingerprint sensor. The live-image of the Honor 10 surfaced recently, however, the design of the phone is partially hidden given that it is in testing. It remains to be seen what Honor has planned up its sleeve and also if its ships with or without a notch. May 15th is one month away, so we still have so much time to learn more about the Honor 10, so stay tuned.