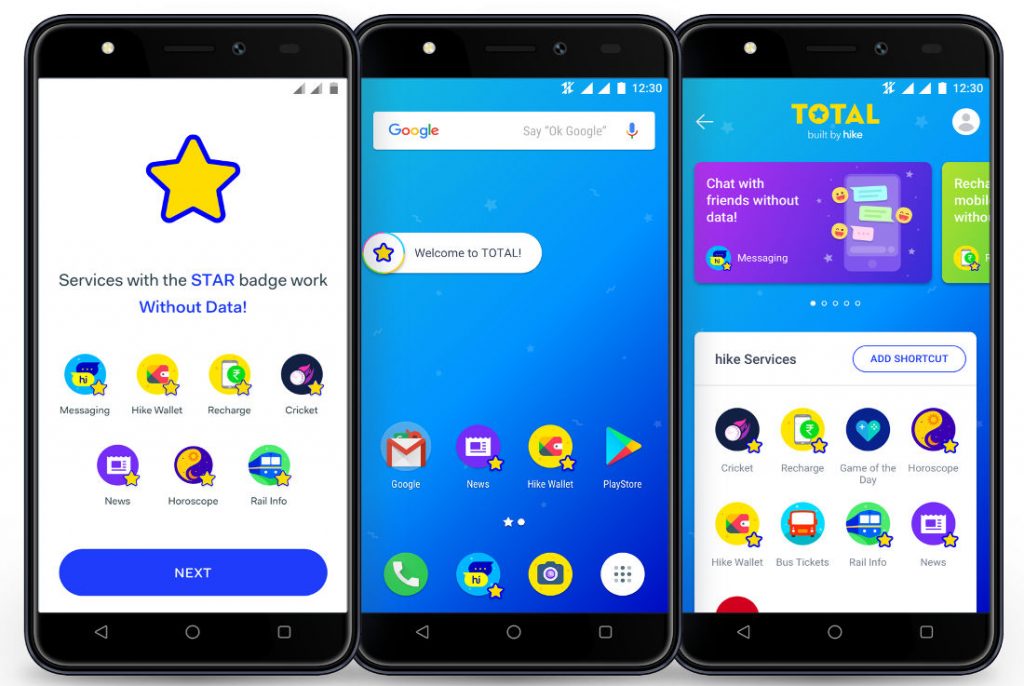 Hike  introduced the Total app last month with an aim to bring internet to the next billion users, and it is also capable of delivering essential services like messaging, news, recharge and more without needing an active data connection. It also brings easy access to data plans for as low as Rs. 1.

The Hike Total interface is very simple with single level login through phone number with access to services like messaging, news, horoscopes, cricket scores, recharge, rail Info even without data at their disposal. The Total is built on Hike’s proprietary technology USSD protocol which the job of encrypting, compressing and transmitting data.

On the other hand, the Airtel’s ‘Mera Pehla Smartphone’ was launched in October 2017. It is an initiative which is aimed at offering low-cost Android phones with 4G to every India. Airtel has partnered with multiple mobile manufacturers including Karbonn, Celkon, Intex.

With ‘Total’ on ‘Mera Pehla Smartphones’, first-time users will find it easy understand and navigate a smartphone. Using data is also simplified and ‘Total’ users can get online with special data packs starting as low as Re 1/-. This is really powerful. We are very clear that to get a billion people online, we need to make the whole process of coming online a lot simpler,  less intimidating as well as cost-effective and this partnership with Airtel is likely to do that

Airtel’s ‘Mera Pehla Smartphone’ has been a pathbreaking initiative towards removing barriers to smartphone adoption in India and has received very positive response from customers. We share Hike’s vision of helping every Indian own a smartphone and benefit from the digital super-highway. We look forward to collaborating with all our partners under this initiative to give every Indian access to a smartphone, bring them online and be a part of Digital India.