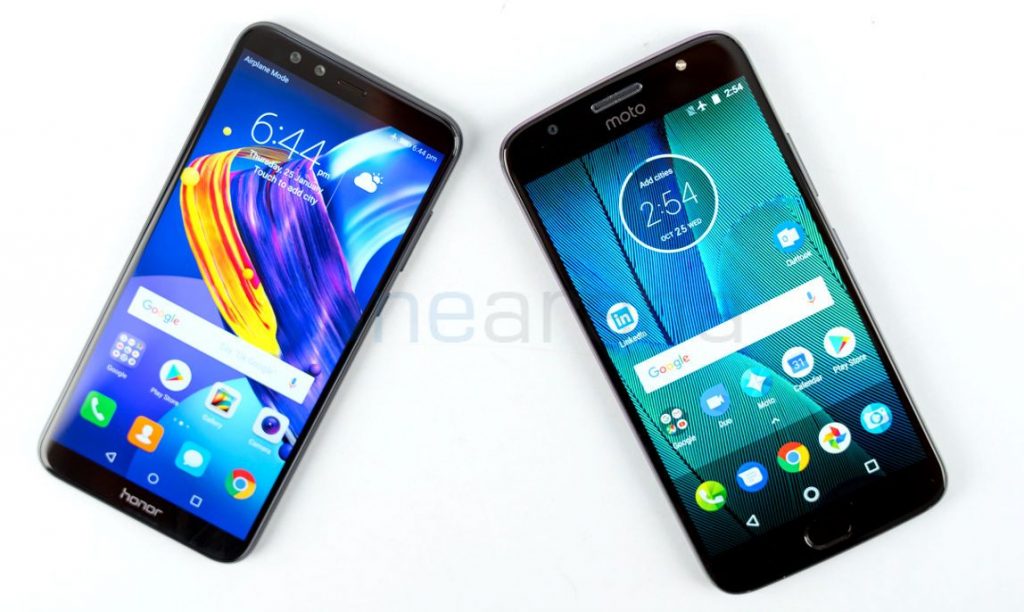 Quite lately, Honor has been launching smartphones with an aggressive pricing strategy to cement its place in the Indian market. Recently, the company launched the Honor 9 Lite with beautiful glass and metal body and Quad cameras at a starting price of just Rs. 10,999. At this price point, the Honor 9 Lite is definitely a bang for the buck.

Having said that, there is a sea of smartphones available in the market from various manufacturers with similar features. Comparing is always healthy, which points out the good and bad from both the sides. This, in turn, helps them to rectify their mistake and not to repeat them in future. Today, we have compared Honor 9 Lite with the Moto G5S Plus smartphone that was launched recently, with dual rear cameras. 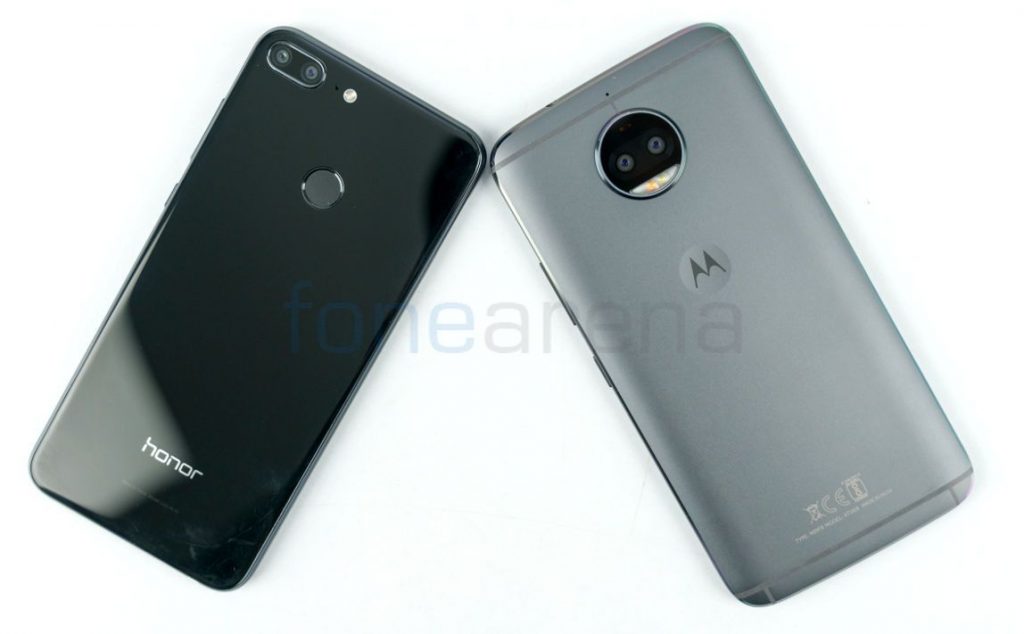 One of the most talked about thing in the Honor 9 Lite is its ‘Design’. The Honor 9 Lite smartphone comes with an all-glass body with a metal frame on sides, which is a rare sight for the mid-range these days. It feels compact yet solid, premium and lightweight in hand. I don’t shy away from saying Honor 9 Lite has set a new benchmark for build and design at this price point. Weighing just 149 grams, it goes easy on your wrist too. The Moto G5S Plus carries same metal unibody design as its predecessor, Moto G5 Plus. Comparatively, this one feels a little bit bigger and bulkier measuring 153.5×76.2×8-9.5 mm and weighing about 168 grams. 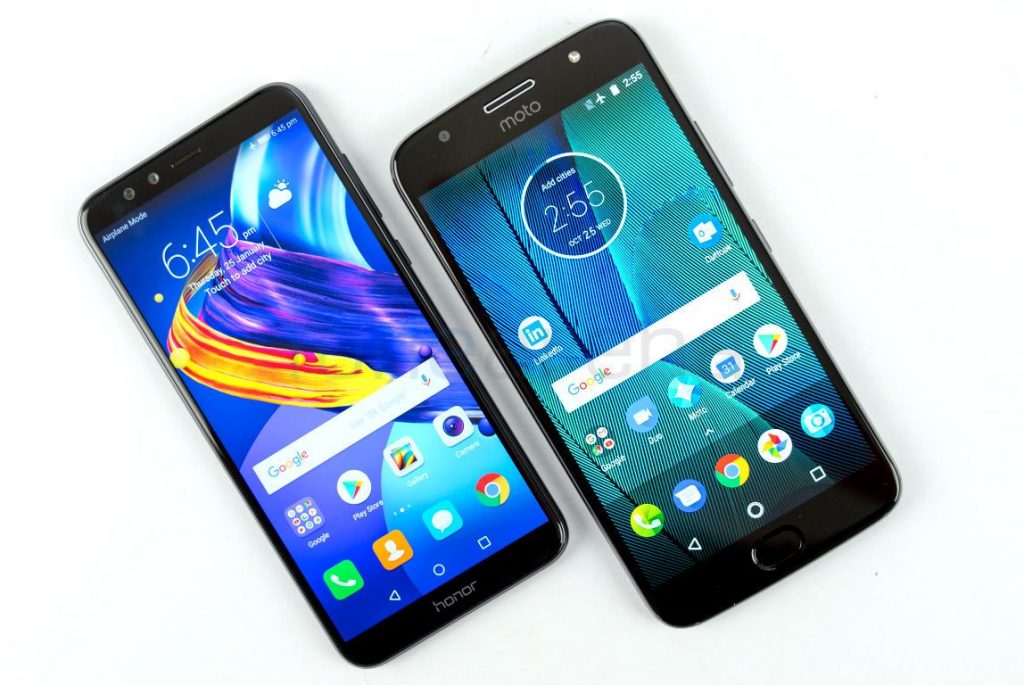 The Honor 9 Lite sports a 5.65-inch Full HD+ 18:9 2.5D curved glass display featuring a pixel density of 428ppi. The bezels on the sides, top and bottom have been trimmed down to give room for display. The display is brighter, text looks sharp, has good color reproduction and viewing angles too. Due to its high brightness level, the sunlight legibility is good compared to other smartphones in this segment.

The Moto G5S Plus sports a 5.5-inch (1920 x 1080 pixels) Full HD display. Here also, the display is bright, colors are vibrant, viewing angles and the sunlight legibility are good as well. But, it has huge bezels above and below the screen, reducing the screen-to-body ratio of the phone to about 71%. 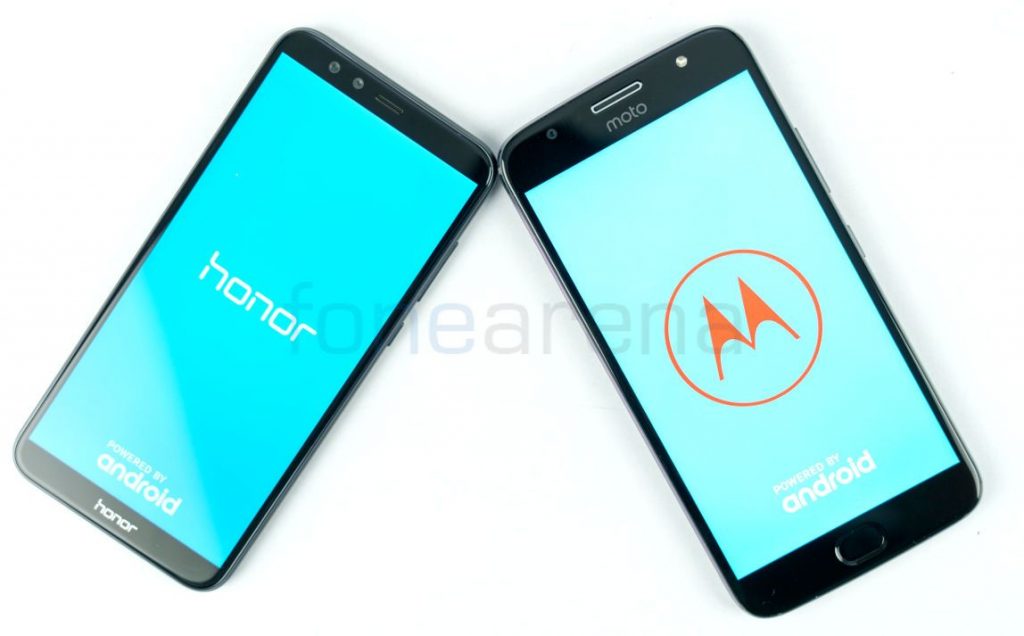 The Honor 9 Lite comes in two variants — 3GB RAM with 32GB onboard storage, 4GB RAM with 64GB storage, with an expandable memory up to 256GB via microSD. The Moto G5s Plus comes with 4GB RAM and 64GB internal storage which can be further expandable up to 128GB via MicroSD card slot. As you can see, the Honor 9 Lite offers several choices to choose from according to the pricing. 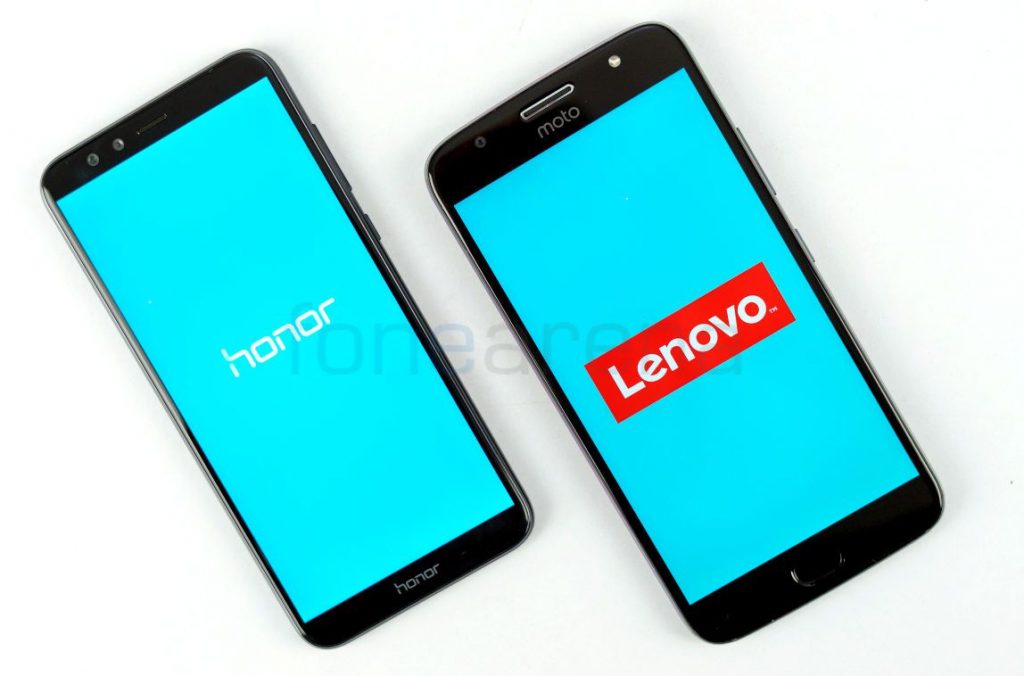 The Honor 9 Lite is powered by Octa-Core Kirin 659 processor (4 xA53 at 2.36GHz + 4 x A53 at 1.7GHz) with MaliT830-MP2 GPU under the hood. In our usage, the phone performed pretty well without any lags or heating issues and the UI is fluid too. Multi-tasking is easier than ever, thanks to 4GB RAM. Moreover, the processor has been optimized so well, that it consumes battery more efficiently. The Moto G5S Plus is packed with 2GHz Octa-Core Snapdragon 625 Mobile Platform with Adreno 506 GPU under the hood. It offers smooth performance all over and offers lag-free multi-tasking as well. 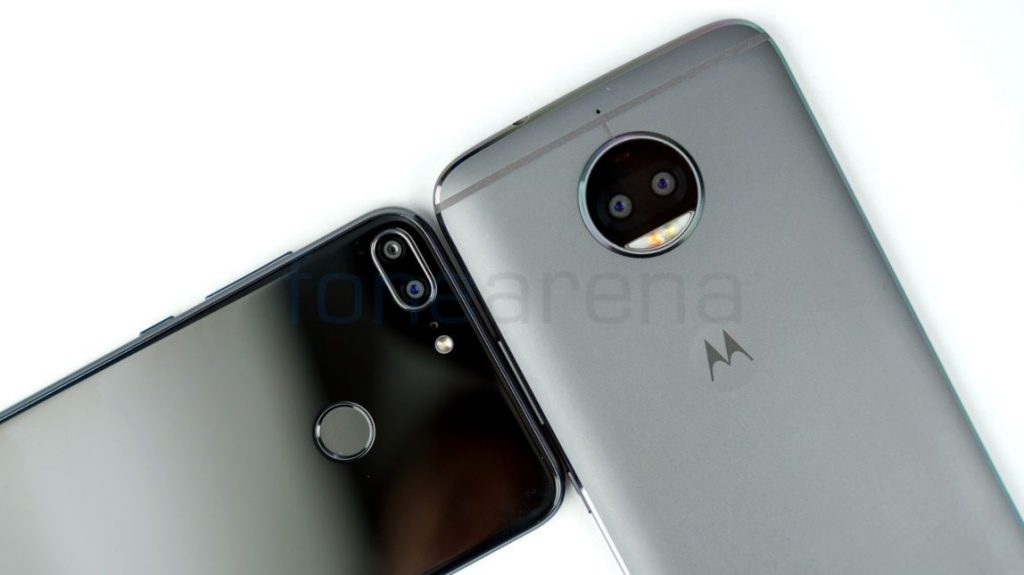 Honor has been launching smartphones with dual camera setup for quite some time. This time, the company has launched a smartphone with a quad camera setup and it is not the first time either. The Honor 9 Lite joins the list of smartphones with quad-camera setup next to Honor 9i in India. The Honor 9 Lite comes with a 13-megapixel primary along with a secondary 2-megapixel on front and rear to capture depth information for portrait shots. Just like other Honor smartphones, the 9 Lite also comes with a wave of features including Pro photos, Pro videos, Night shot, light painting, Time Lapse, Filter and much more, which can be experimented to users delight. 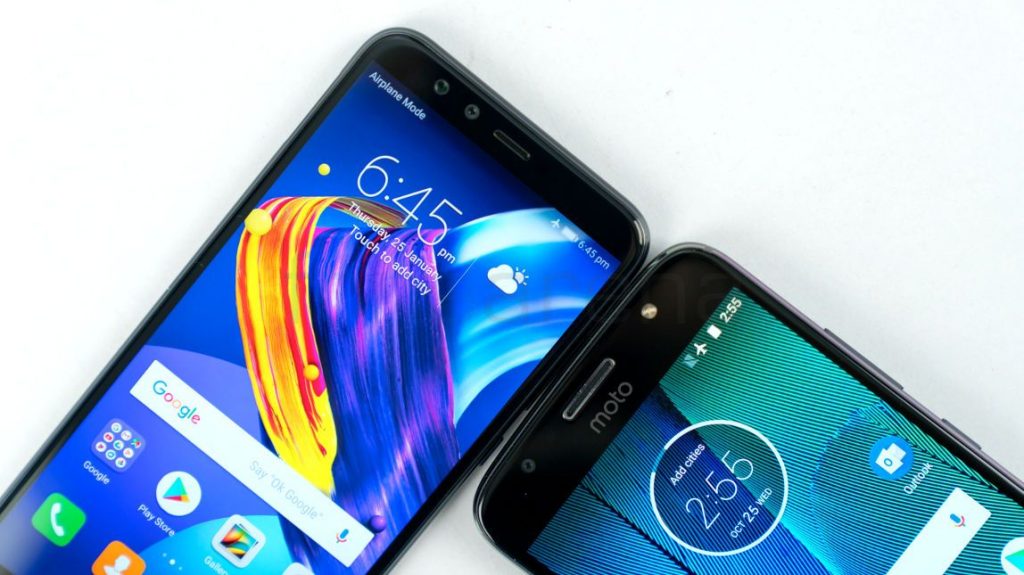 The front camera also supports portrait and moving picture mode. Since the Honor 9, Lite supports portrait mode on both front and back, you can get professional bokeh style effects when clicked properly. The Honor 9 Lite provides some great shots under daylight conditions with the good amount of details.

The Moto G5S Plus being the first device in the Moto G line up to bring dual camera setup, didn’t seem to perform up to a level like Honor 7X does. In terms of specifications, 13MP dual rear cameras one with monochrome lens and the other one with RGB lens, f/2.0 aperture, dual-tone LED flash and an 8MP front camera with f/2.0 aperture and LED flash. Comparatively, the features are less when it comes to Moto G5S Plus. Coming to the image quality, the daylight shots were fine, but some images are dull when it is cloudy or in poor lighting conditions. The front-facing camera decent and there is flash for poor lighting conditions. 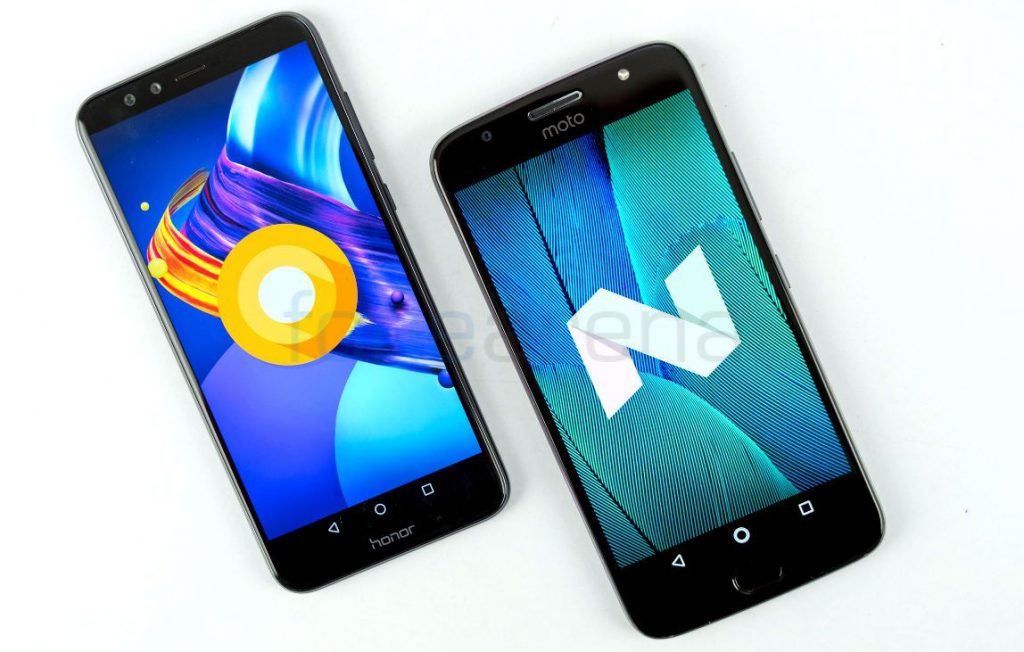 The Honor 9 Lite is shipped with the latest Android 8.0 Oreo update on top of EMUI 8.0 out of the box. It comes with a lot of tweaking and customization options. The Moto G5S Plus on the other side is shipped Android 7.1.1 (Nougat) with Moto features such as Moto app and the phone. You get lots of options including changing navigation button, floating dock, app drawer and more. The Moto G5S comes with Stock UI which is minimal. Having said that, the UI preference is entirely subjective and I personally love to customize my device to the stock Android experience, but the Honor 9 Lite offers Oreo, while the G5S Plus is yet to get the Oreo update. 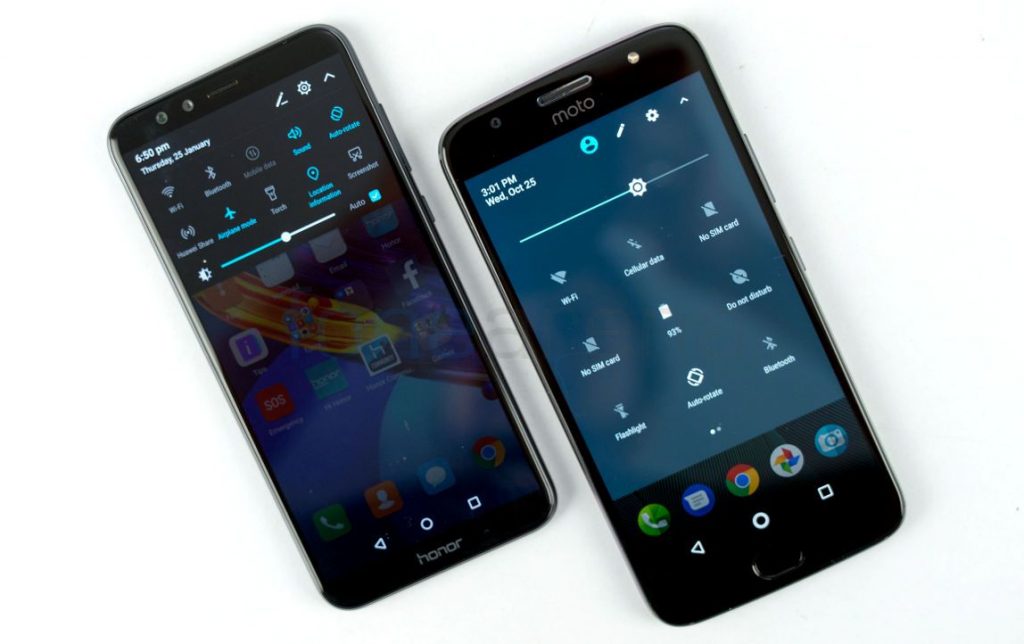 One can easily pick the winner among these two smartphones and undoubtedly it goes to the Honor 9 Lite. The reason being, the 9 Lite is so modern and up to date in terms of build, processor, design and of course the display. The cherry on the cake is the pricing here. At the same time, Moto G5s Plus is a good device, but lacks features for its pricing.