The folks from Skyfire have released more info about their upcoming iPhone app. 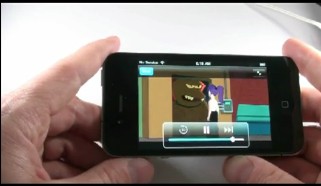 watch the video below to see the browser in action

Skyfire 2.0 for iPhone follows on the heels of Skyfire’s recent launch on Android, which has now become one of the most popular third-party browsers on Google’s mobile platform, with nearly a million downloads in its first three months.

Skyfire 2.0 is the first mobile browser built for the social media generation and makes the mobile Internet experience faster, Flash-enabled and fun, including smart media recommendations.
What’s in Skyfire 2.0 for iPhone:

• Flash Video –The “Video” icon enables users to play millions of Flash videos around the web that otherwise do not play on mobile. This unlocks content trapped behind those error messages with question marks and blue Legos by transcoding the Flash content into HTML5 on Skyfire’s servers.

• Related Content – The “Explore” icon brings the most relevant content on the Internet to a user’s fingertips based on what they are viewing at the time. The Explore button pulls video, buzz, news, images and other sites from the web based on what is on the current page.
Adherence to Apple’s Standards:

Skyfire for iPhone was built in tight accordance to Apple guidelines, including the use of a WebKit browser core shared with Safari, and h.264 adaptive streaming.
Skyfire’s famed cloud-computing technology translates Flash video on the fly from millions of web sites into HTML5 formats, and supports iOS devices via Apple’s HTTP live streaming standard. Skyfire also avoids the concerns raised in Steve Jobs’ recent essay regarding Flash on mobile devices. By optimizing Flash for iPhones and network conditions in the Cloud, Skyfire improves performance and maximizes battery life while playing video. The browser also avoids alternate runtime environments and other security vulnerabilities.

“We’re excited to submit a mobile browser for iPhone and iPod Touch that addresses Apple’s concerns regarding Flash deployment on mobile devices,” explains Jeff Glueck, CEO of Skyfire. “Rather than enabling Flash, Skyfire will translate videos into Apple standards. Skyfire supports HTML5 but at the same time, we recognize that the transition to HTML5 for 100 million Flash publishers will take years. We hope to bridge that gap and solve a problem for consumers who want access to millions of previously-unavailable videos on their iPhones.”

An Advantage for AT&T:

Not only does Skyfire enable Flash video while adhering to Apple’s guidelines, it offers a major enhancement to video data compression for AT&T. Skyfire compresses video data by an average of 75%, reducing buffer time, enhancing battery life and easing the network congestion that has caused user complaints in major metropolitan areas.

Be First in Line: