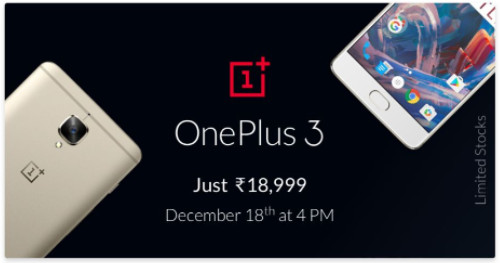 Update: Even after OnePlus co-founder Carl Pei’s accusation of Flipkart selling the OnePlus 3 with huge discounts, even through the company is exclusively selling their phones on Amazon.in, Flipkart today updated the teaser that reveals the discounted price as Rs. 18,999. The sale will happen at December 18th at 4PM.

It is doubtful if the phone bought on Flipkart will have warranty since OnePlus released a statement  saying “We advice customers to purchase OnePlus products only through official channels as we cannot guarantee the authenticity of the products sold elsewhere.”

Earlier this week Flipkart announced that it will host Big Shopping Days sale from December 18th to 21st offering discounts on several products. Now it has revealed details about some offers, including huge discount on OnePlus 3 smartphone that was launched for Rs. 27,999 earlier this year. According to the teaser image, the phone will be available for less than Rs. 20,000 during the sale, so it could be available for Rs. 19,999, which is Rs. 8,000 discount.

Flipkart says that the stocks are limited. Only the Soft Gold version is shown in the promo image, so it is not clear if the Graphite version will also be available at discounted rate.

Flipkart will also have exchange offer. More deals will be tomorrow, December 17th. You can check out the sneak peek of these Big Shopping Days deals here.