Casio has come up with a brand new product in their G-SHOCK collection called the GPS Hybrid Wave Ceptor GPW-1000. The watch is one of the costliest addition to the G-SHOCK lineup but yet is one of the cheapest GPS watches available in the market. Let’s find out if it is worth its price.

It is easily evident Casio G-SHOCK GPS Hybrid Wave Ceptor GPW-1000 is clearly a G-Shock  when you take a look at the design. Since that is a lengthy product name, we will be referring to the product as “the watch” for the sake of sanity for most of the review.

The watch features the same rugged design that has become a trademark of Casio and G Shock since its inception. Over the past couple of years, G Shock has become a sort of brand that has developed a hipster following for its offbeat and eye catching design. 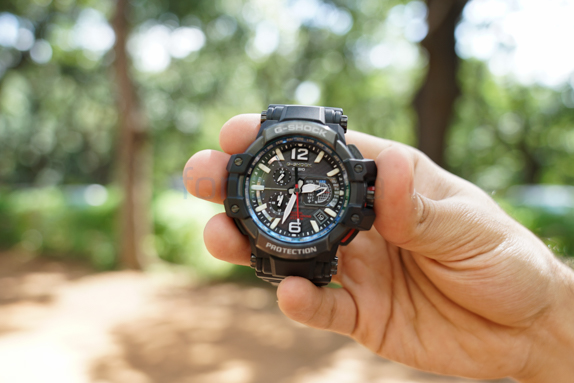 Few watches can look good while being bulky and rugged at the same time but the GPW-1000 is one of the exceptions. The version that we are reviewing is the GPW-1000-1A which features a majorly black design with red accents on two of the buttons on the right side. The outer bezel with the “G-Shock” and “Protection” branding is DLC (Diamond like Carbon) coated.

The inner bezel has a contrasting electric blue ion plating with 27 time zone markings. Although the casing itself is pretty large, the actual dial size is pretty normal. Most of the size is occupied by the protection that makes the watch a G-Shock. We shall address the ruggedness later on in the review.

The dial features hands for hours, minutes and seconds. All are photoluminescent and the second marker has a red accent too. You also have secondary dials for dual-time, approximate latitude, seconds, stopwatch, countdown timer, alarm, and calendar.

Up top, you have a scratch resistant sapphire crystal glass while the casing itself is made out of stainless steel with a soft-touch resin exoskeleton that makes it rugged. Even the hour markers are made out of a nano-processed resin material that has a nice 3D depth effect.

It may not be evident at first but the band itself is quite special. It isn’t the usual rubber straps that you get on most watches. Instead, you get a resin based band with carbon fiber inserts. The carbon fiber inserts are visible on the inner side of the band and has a dark blue colour that becomes more evident under certain lighting. We quite liked the contrast that it offers next to the black colour of the rest of the watch.

The crown on the right side is oversized to make it easier to use even with gloves on. It has a quick lock mechanism that prevents accidental inputs when locked. The buttons are also made of forged metal and are ease to use with gloves as well.

Despite having an oversized casing, the watch doesn’t feel too big on your wrist. Even the 126 grams of weight doesn’t really feel all that heavy once you wear the watch on your wrist. The size would be perfect for those who have fairly large hands but I don’t think it’ll look out of place on people with smaller hands either.

It may take a day or so to get used to the feel of the watch on your wrist but once you do, it is quite comfortable and you don’t really notice it being on your wrist. You also might take a few tries to find the perfect length position for your wrist.

The band is actually attached to the casing using 2.3mm diameter screws. These screw offer a smooth movement and have 1.5 times the usual tightening torque of usual band links. It also helps to avoid loosening of the strap due to vibrations. The smooth movement of the band thanks to these screws really makes a difference.

The Sapphire Crystal glass on the dial makes sure that hardly anything will scratch it in your daily use cases. Unless you’ve got a bunch of spare diamonds lying around to test the scratch resistance, it should hold up good.

Being a G-SHOCK, the watch can easily withstand vibration and shocks. It is also waterproof upto a depth of 200 metres. It is one thing to be rugged and withstand drops and falls but it is also important to prevent easy scratching or flaking of the watch surface when it does fall. Casio has made sure to take care of that by only using materials of the highest quality.

We did do the occasional drop onto tiles and cement floors but not even a scuff. We’re pretty sure that the G-SHOCK will be able to handle much more if it is needed to. Even if your dog probably likes chewing your watch straps, its probably going to take quite a while before it is able to rip apart the strap on this watch thanks to the carbon fiber weaving.

The watch has an analogue dial and there isn’t a secondary digital display like in the case of many G-SHOCK watches. In a way, we quite like that since it really isn’t necessary. In most cases, the secondary display seems like something that would appeal to kids and teenagers only. 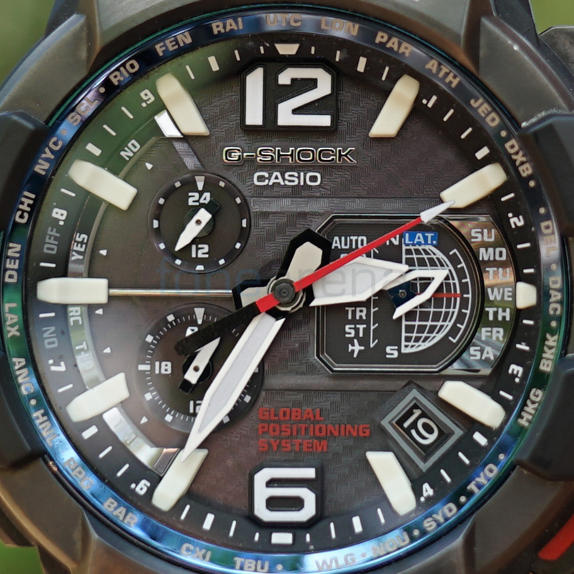 The dial is large and easy to read time off and also has a powerful white LED to illuminate the watch dial in case things get too dark. You also have photoluminescent markers that glow in green.

However, the coolest way of setting the time is by making the watch do the work for you. All the user has to do is force the watch to calculate the time by using the GPS and Radio Signals by pressing and holding the bottom right button for 5 seconds. Once done, the watch will acquire the proper time using 3 or more GPS satellites. The entire process takes around 30 seconds to 2 minutes but the watch will adjust itself automatically and can even take into account daylight savings time.

We tested this out when I traveled to Berlin as well as by changing the time zone manually then asking the watch to set the time automatically using GPS. The GPW-1000 is the first watch to come with both GPS and Radio Signals. You might face some issues when trying to set the time indoors since GPS doesn’t really function that well. In that case, it’ll point towards a “NO” in between the 8 o’clock and 9 o’clock markings. But outside, you should have no issues in locating the accurate time.

Subsequently, the watch is also able to correct the time automatically using terrestrial radio waves and GPS satellites. There is a flight mode as well to disable the GPS and other radio to prevent interference when flying. There is a mode dial that shows you the latitude of your current location while using GPS. In order to facilitate the automatic or semi-automatic time setting, Casio had to include motors inside the watch to drive the hands and also an electronic crown that has a locking mechanism.

The watch is solar powered and has a feature called Tough Solar. It is able to make use of not just sunlight but also fluorescent lights to charge up the battery. The charge is stored in a secondary battery that is used to perform some of the heavier functions of the watch.

The Casio G-SHOCK GPS Hybrid Wave Ceptor GPW-1000 is a brilliant watch. Granted, it is costly, especially for a G-SHOCK. However, it is one of the cheapest GPS watches available and costs only a fraction of what most other watches with GPS will cost you. Casio have paid a lot of attention into every small detail of the watch and that really reflects on the kind of experience you get. 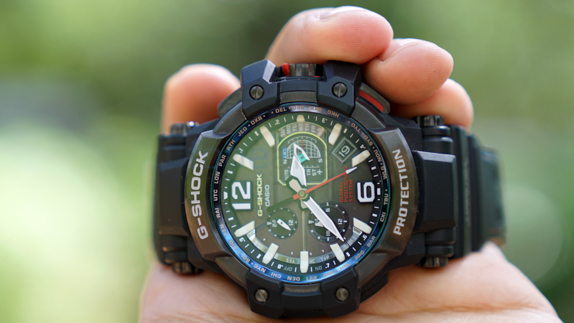 If you are someone who leads an active lifestyle and/or jetsetter, then this is one watch that you would be happy to live with. It’s got a style that will not go out of fashion but also built rugged enough to last for a long time especially with the Solar powered battery. The Casio G-SHOCK GPS Hybrid Wave Ceptor GPW-1000 retails at a price of Rs 49,995 and comes in several different colour variants.