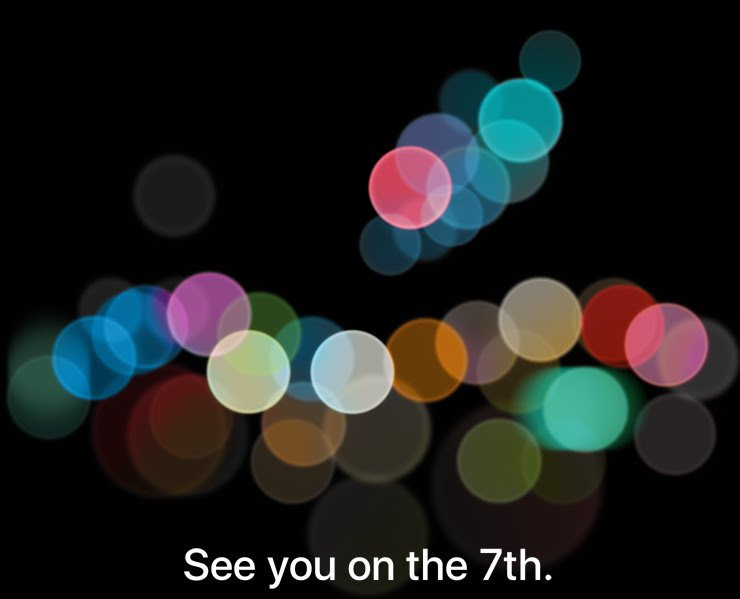 Apple has officially announced its September 7th event, after recent rumors. This year’s invite shows a bokeh shot with the caption See you on the 7th. Apple is expected to announce the next iPhone at an event. Apple Watch 2 is also expected to be unveiled at the event, but the MacBook Pro 2016 lineup will reportedly not be announced and is expected only by the end of this year.

This year Apple is expected to unveil the iPhone 7 and iPhone 7 Plus smartphones. There are also rumors about the iPhone 7 Pro. According to earlier rumors, the design of the new iPhones will remain unchanged, but the 3.5mm headphone jack will be removed, the phones will have Force Touch Home button and redesigned antenna lines . These will have upgraded Apple A10 chip and are expected to come in 32GB, 128GB and 256GB models.

The Apple Watch 2 is expected to sport bigger battery and GPS, but it is not likely to come with LTE support.

The Apple event is scheduled for Wednesday, September 7 at 10:00 am PT (10:30 PM IST) and happens at the Bill Graham Civic Auditorium in San Francisco, California.  As usual it will offer live stream for iPhone, iPad, or iPod touch users with Safari on iOS 7.0 or later, Mac users with Safari 6.0.5 or later on OS X v10.8.5 or later, or a Windows 10 users with Microsoft Edge. It also offers live stream for Apple TV (2nd generation or later) users with software 6.2 or later.