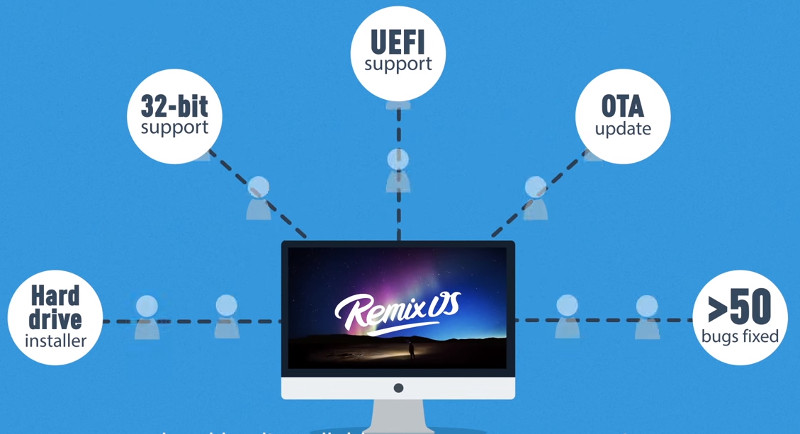 Jide Technology that released Remix OS 2.0 alpha version for PCs and laptops last month, today announced that it will release beta version of Remix OS for PC on March 1st through OTA and will also be available for download on the official website. “The new Beta version has a substantial number of bug fixes and an increase in device compatibility, as well as over-the-air (OTA) updates, 32-bit system support and dual boot support through a new hard drive installer tool,” said the company.

Remix OS is the same Android, which has been tweaked to work on PCs and includes new UI, responds to mouse clicks and even lets you use keyboard shortcuts on your PC or laptop.

It is really a good news that it is getting support for old 32-bit systems, since most old systems can easily run this lightweight Android-powered OS. The company said that Google Play Services and the Play Store will not currently be pre-installed on Remix OS since Google takes time to test the new operating environment, but users of Beta version will be able to sideload Google Play Services by following instructions found on the official Jide website.

Thanks to the support and feedback from our generous community, we’ve been able to speed up the development of the Beta version. Now with OTA software update support, users can begin to rely on Remix OS for more daily activities without the worry of a new update wiping their data. This update will help us to charge towards the eventual stable release later in 2016.