Xiaomi Redmi 3 with metal body was certified by TENAA last month. Now, the company has released a teaser which suggests that the Redmi 3 will be announced on January 12. 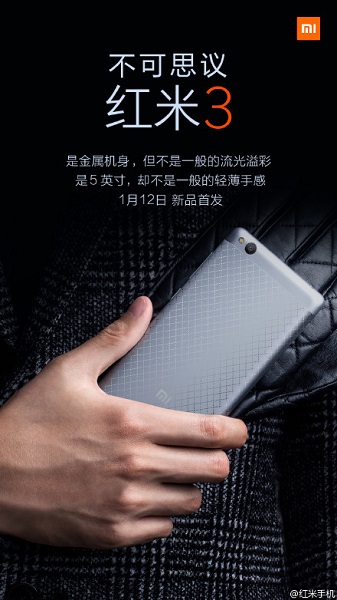 The teaser released by the Chinese smartphone maker on Weibo shows the back of the Redmi 3 that sports a metal body with patterns. The Mi logo is also seen at the lower back. In addition, the listing also confirms a 5-inch display on the phone.

The Xiaomi Redmi 3 is expected to come in Dark Grey, Silver and Champagne Gold colors. Just yesterday, Xiaomi confirmed that the Mi 5 with Qualcomm Snapdragon 820 will be announced in February after Chinese New Year that falls on February 8.